Sewing friends, before I begin, I want to let you know there are sewing projects in the queue for publication at the blog, but most of my sewing energies of late have been of the selfless sewing kind.  I haven't sewn anything up for myself since my splatter art blouse!  I knew the first week I would definitely want to take a break, so I sewed up a bunny rabbit stuffed animal for Rex.  I did cut some coat fabric for a coat last week, but then Rex reminded me about his pizza costume.  So I put the coat on hold and decided to make that this week (it is nearly done--woo!).  But the coat will have to wait just a touch longer since I will be receiving my first fabric from Fabric Mart tomorrow for my very first blog post for them.  I suspect most of my weekend will be spent getting a lot of that project done.  :-) 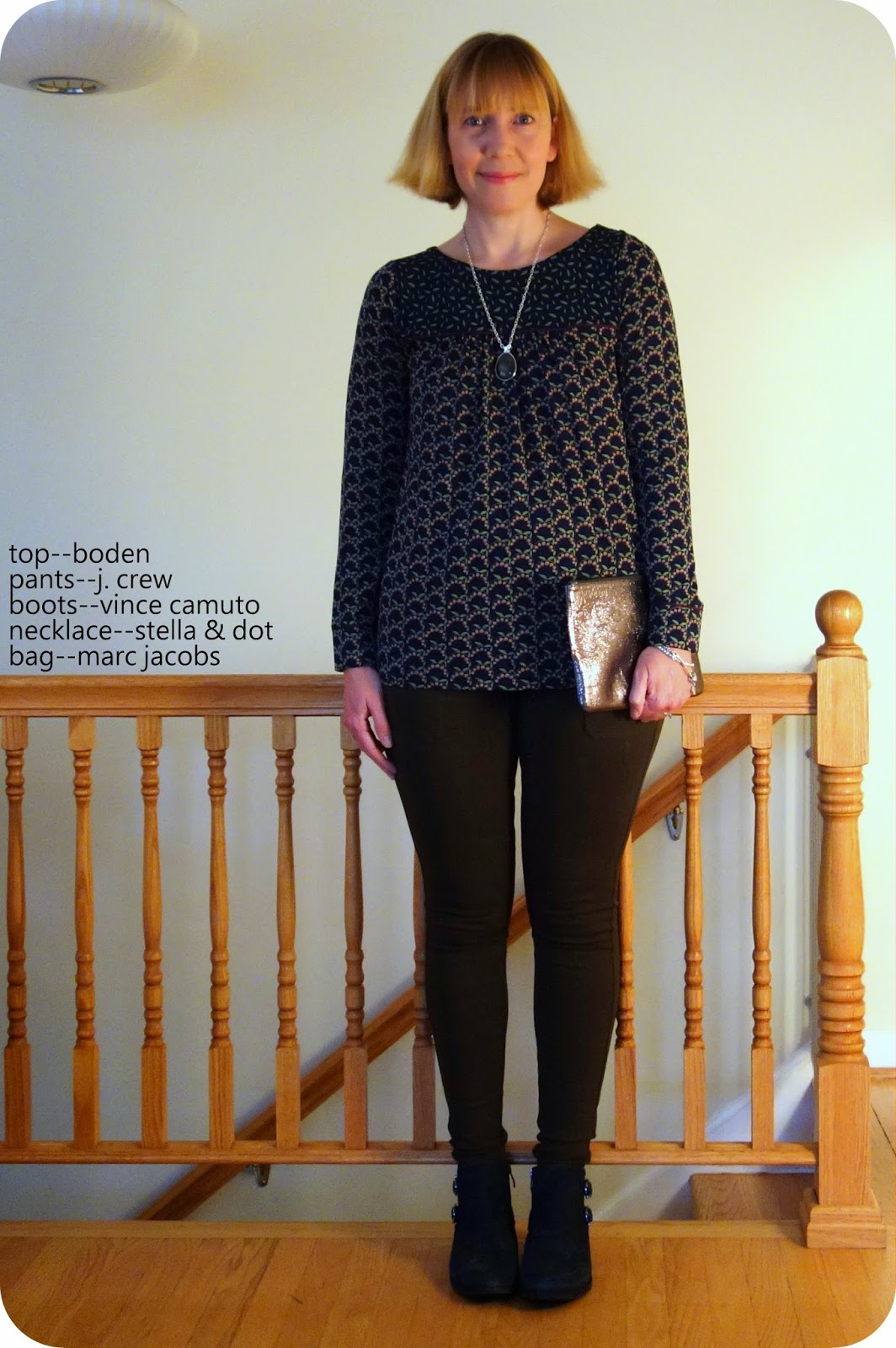 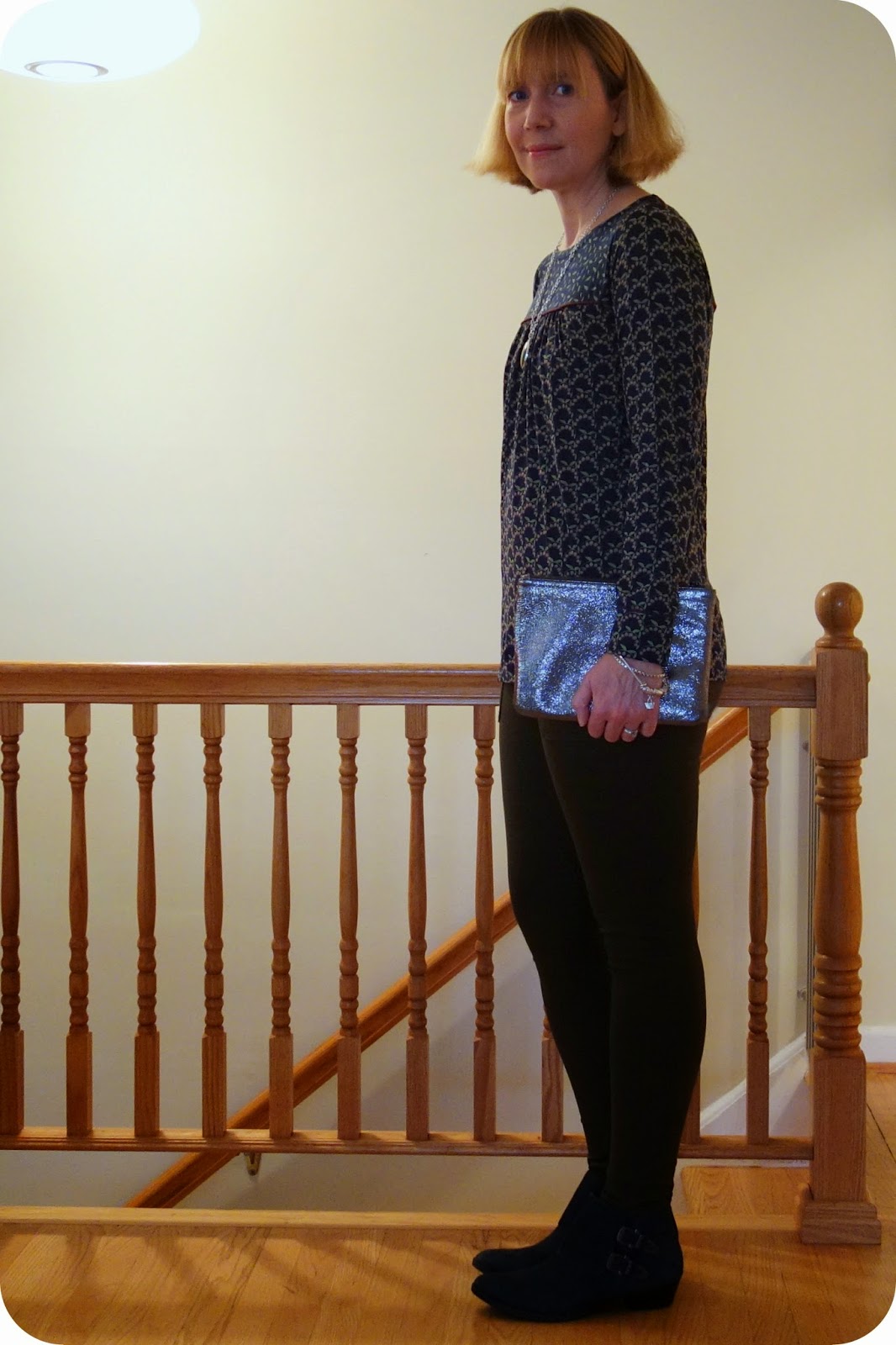 Where:  Joann's, Michaels, and Noodles and Co.

Ease of Wear: (3.5 of 5 stars--5 being the most easy to wear.)  Even though the only reason I could wear these pants was because I had a recent weight loss doesn't make them easier to wear.  They are cute, I like the slim cut with heavier fabric, but the waistband kept riding down.  I had to keep hitching it up.  I don't know what is going on...it wasn't the worst, but I wish there was something I could figure out to do so they wouldn't ride down on me.

, original review here) is awesomely comfortable, so that helped make up for the pants.  But not enough to drag it higher in score.

Cool Factor: (4.5 of 5 stars--5 being the coolest.)  My style is usually not this style, even with the Chepstow top, so I would say stepping out of my preppy comfort zone helps up the cool factor.

Anecdote from the day:  Fall.  Grr.  Fall.  I hate the "oh it's so cold in the morning, but almost hot by midday, and then rainy in the afternoon."  I spent the day wearing this wondering why I bothered.  I am not sure what would have worked for the weather we had yesterday.

Apparently Angus is a Lorde fan.  Upon arriving at Joann's to procure more supplies for Rex's pizza costume, "Royals" came on, and Angus got mad at me for singing because he wanted to sing the song.  When asked if he wanted to listen to the music or go into the store, he didn't hesitate before he said "listen to music."  And to make his day even more complete, they were playing "Royals" in Michaels, too.  :-) 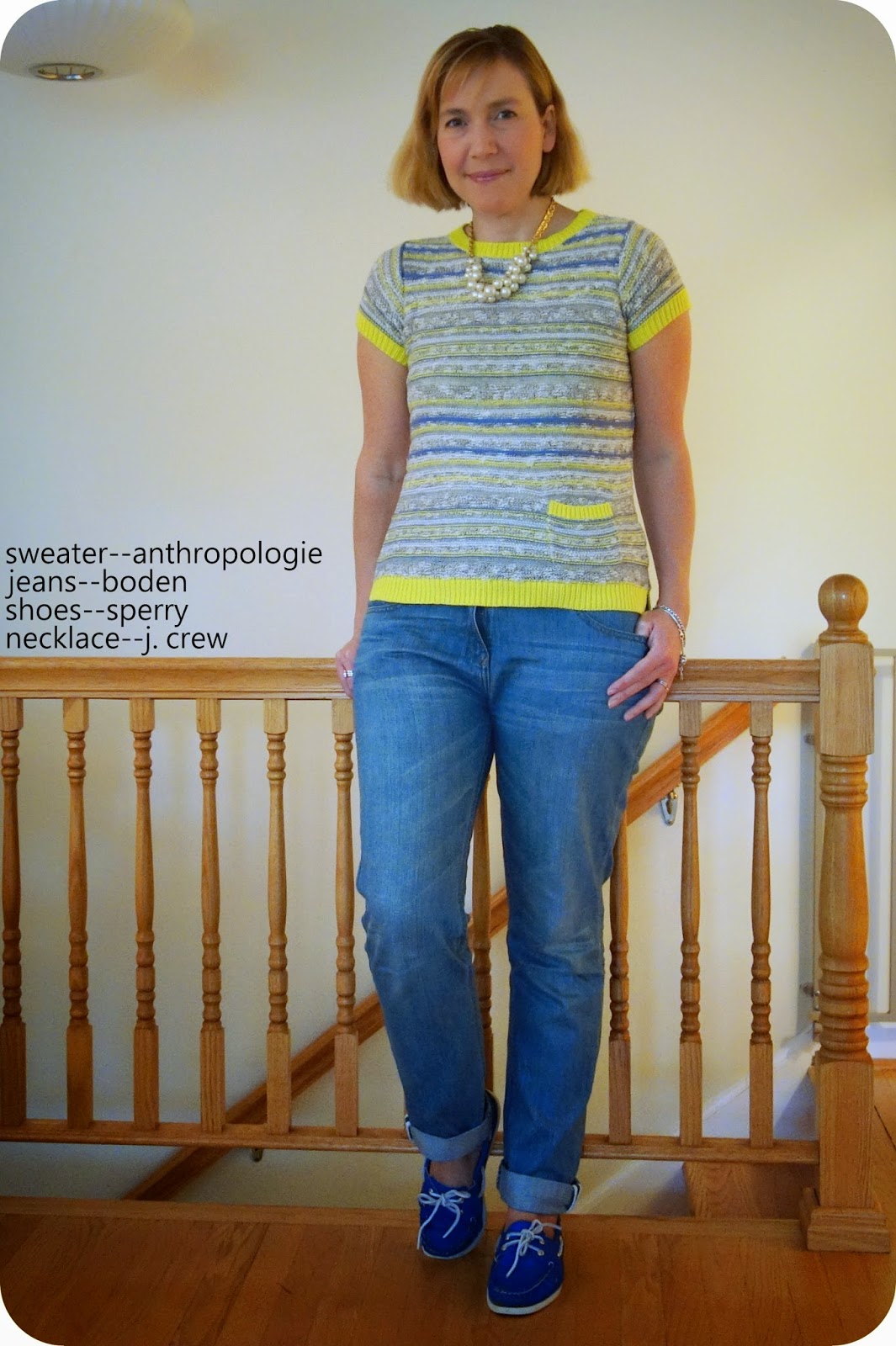 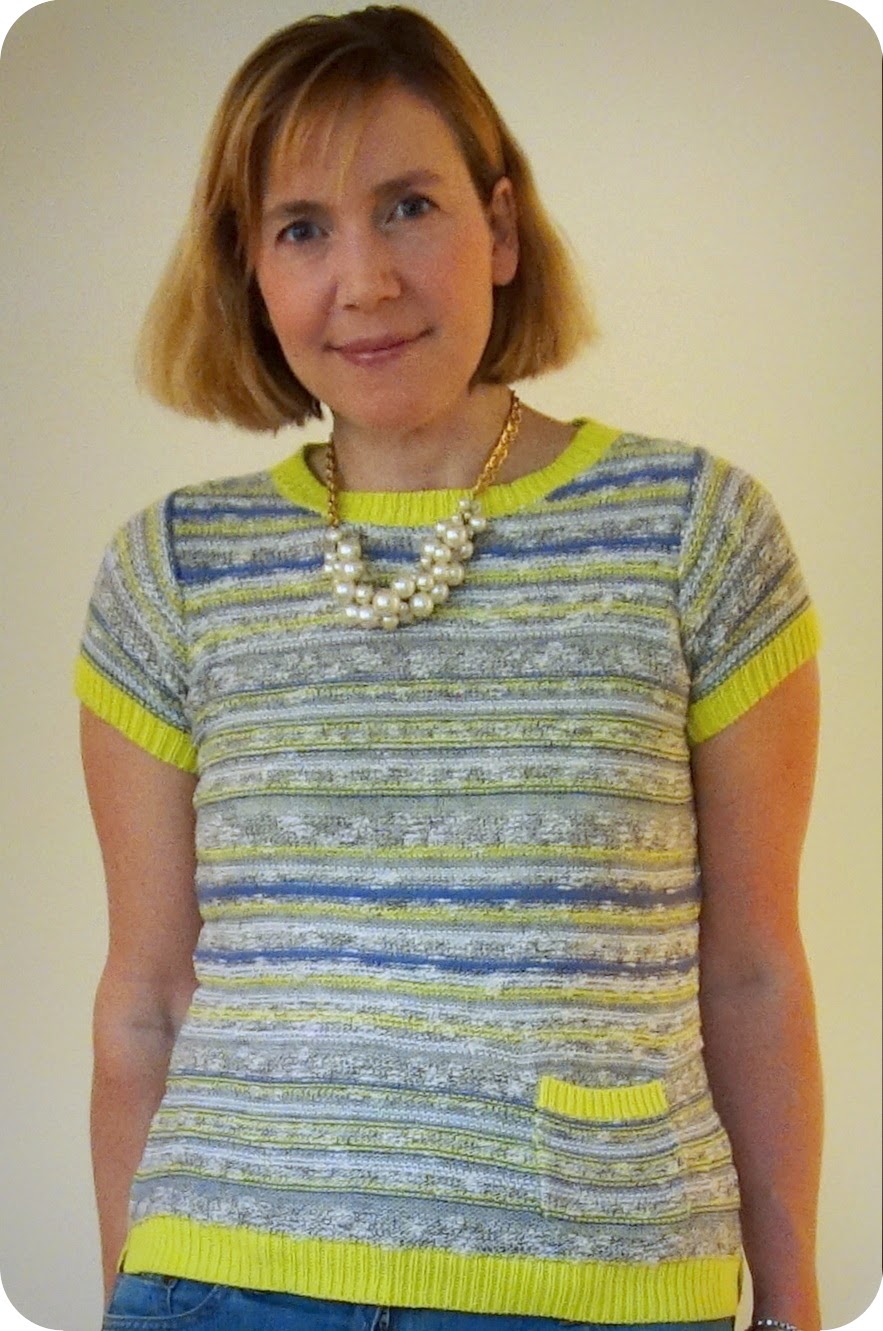 Where:  Bowling and Harris Teeter.

Ease of Wear: (4 of 5 stars--5 being the most easy to wear.)  These johnnie b. jeans are wonderful, but maybe a bit too fitted for bowling?  I should probably just show up to bowling in sweats, but no one else does, so I guess I should just learn how to bowl better in non-activewear.  :-)

Anecdote from the day:  My games were B-A-D, like my first year bad.  Sad.  Our team was whooped soundly, after soundly whooping others the week prior.  Sigh.

BTW, these photos had to be lightened a ton.  The light during the morning is just off in the house and outside.  I look forward to the time falling back on Nov. 1...it will make waking up easier and getting photos done properly, as well.

(If I use the flash, my skin looks ghostly, and I am 100% serious when I say ghostly...I am paler than I realized.) 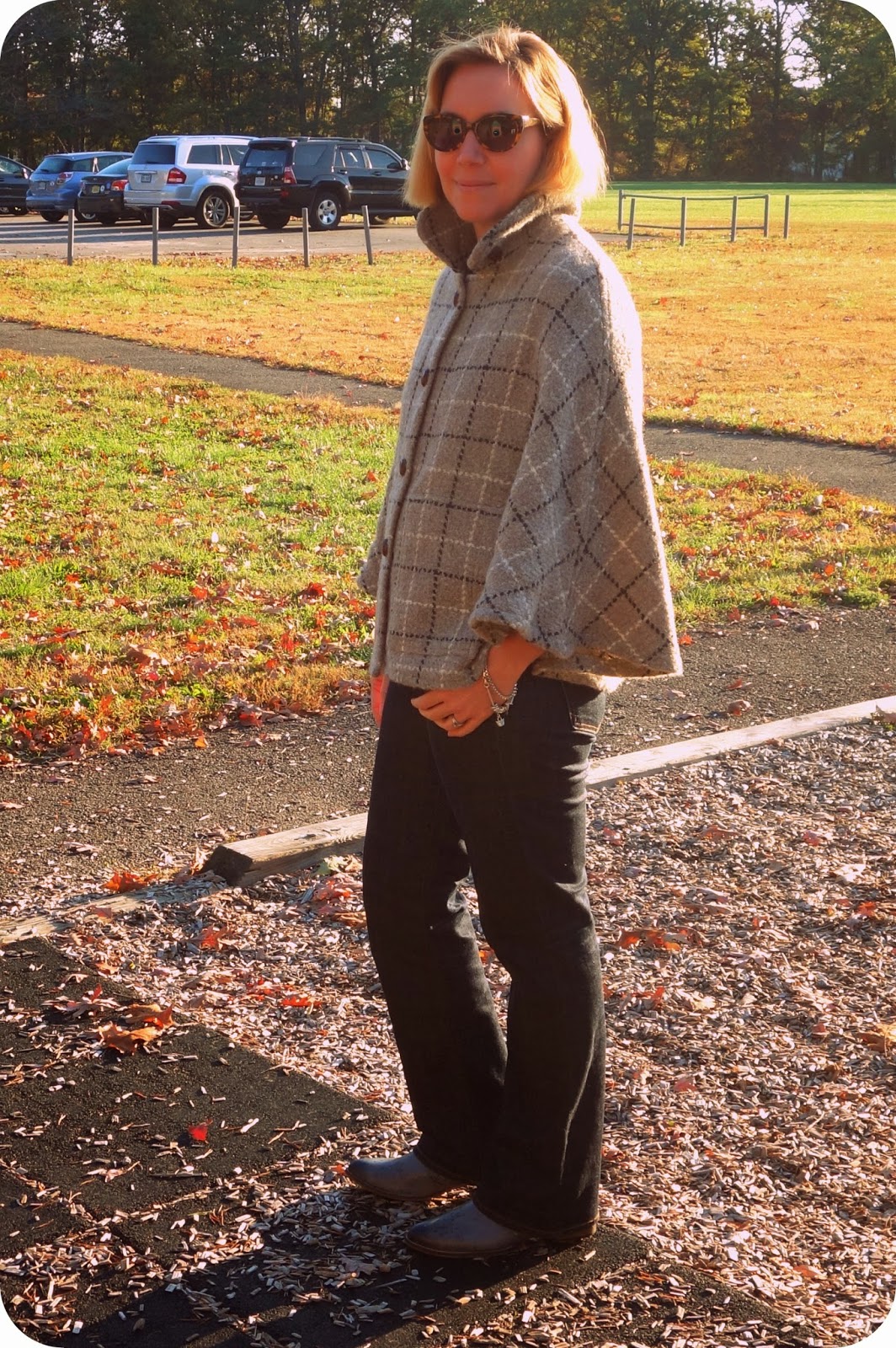 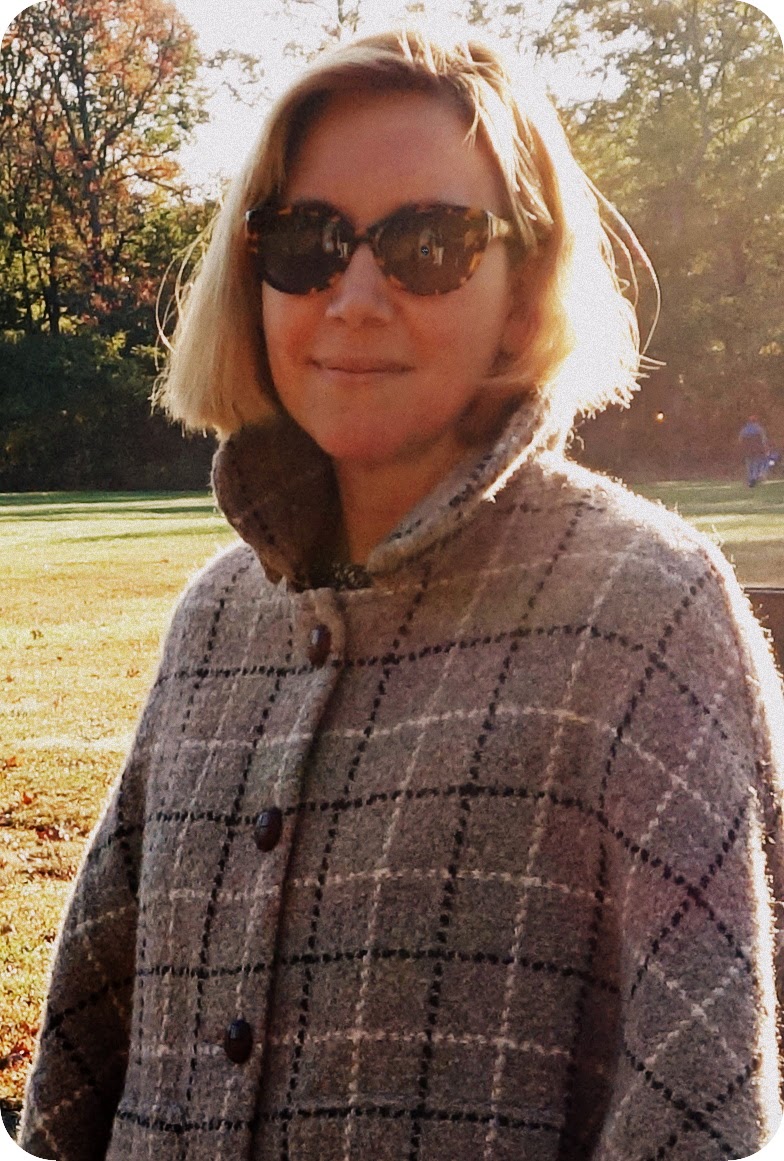 Ease of Wear: (4.5 of 5 stars--5 being the most easy to wear.)  I was warm because of the Blarney Woolen Mills cape, and comfortable because of the J. Crew jeans.  The boots, while awesome, didn't work with the socks I wore, so I had to keep pulling them up to make them stay up.  That is the blemish, and the reason for the 1/2 star reduction.

Cool Factor: (5 of 5 stars--5 being the coolest.)  I am giving this one a perfect score.  I really like the way this cape looks when combined with the jeans, boots, and sunglasses.  I don't know if the Sartorialist would dig it, but honestly don't give two flying "you know whats" about his opinion.

Anecdote from the day:  Rex's team made it to the championships with the game they played that day.  There is a really good chance their team will be in first place.  I am thrilled for them.  We have the most amazing coach, just an all-around great guy, and the kids really work super hard and try their best, so to see the team make it this far is really exciting.  Wish Rex and his team luck on Saturday coming, please!!!

Okay, that's all for tonight!

P.S. Boden fans--20% off with free ship and returns are here starting tomorrow for four days!!!  Will write more on that tomorrow morning!  :-)
Posted by dinagideon at 6:31 PM