Made by Me File/OOTD: Inspired by Nature. 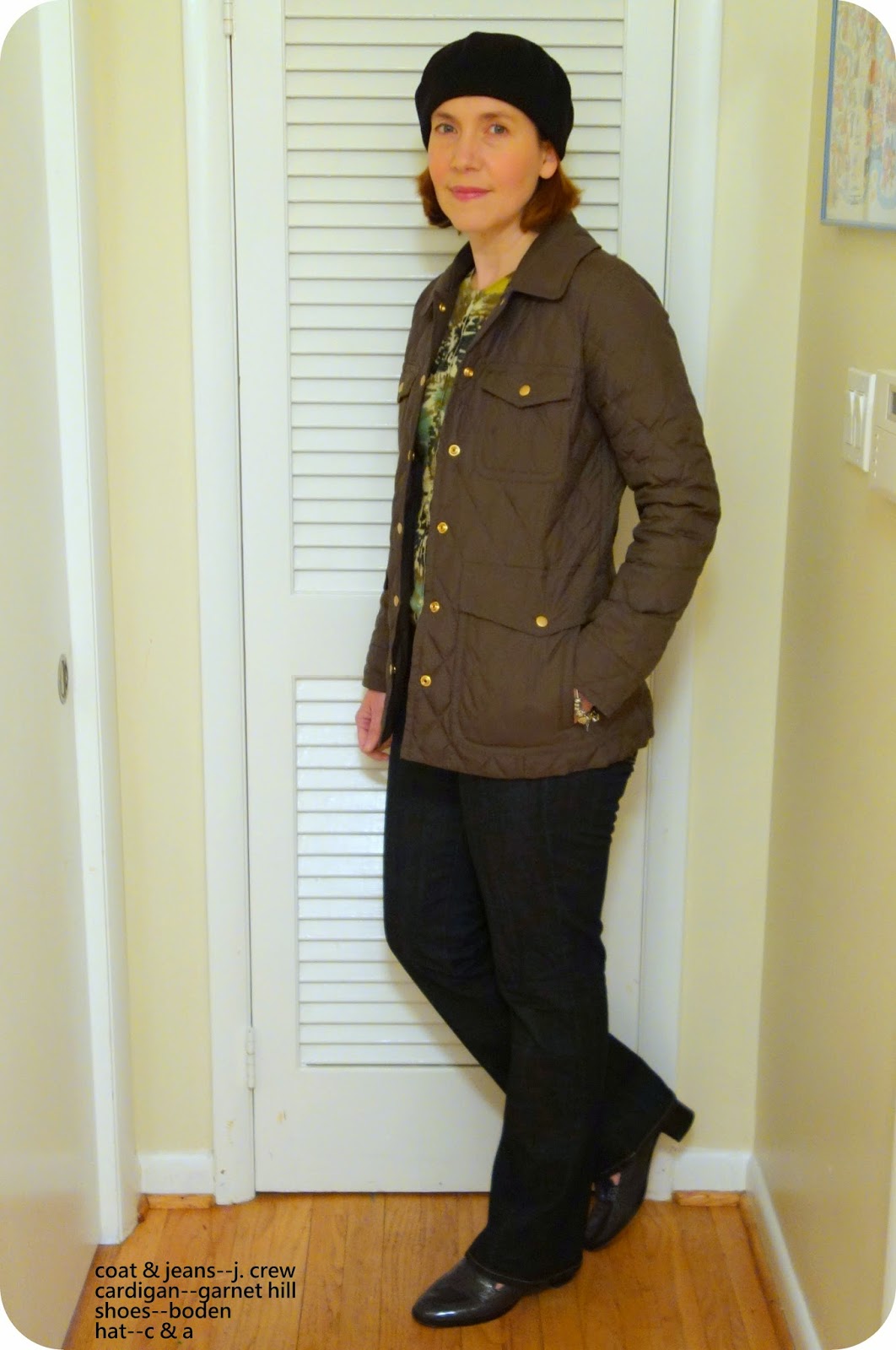 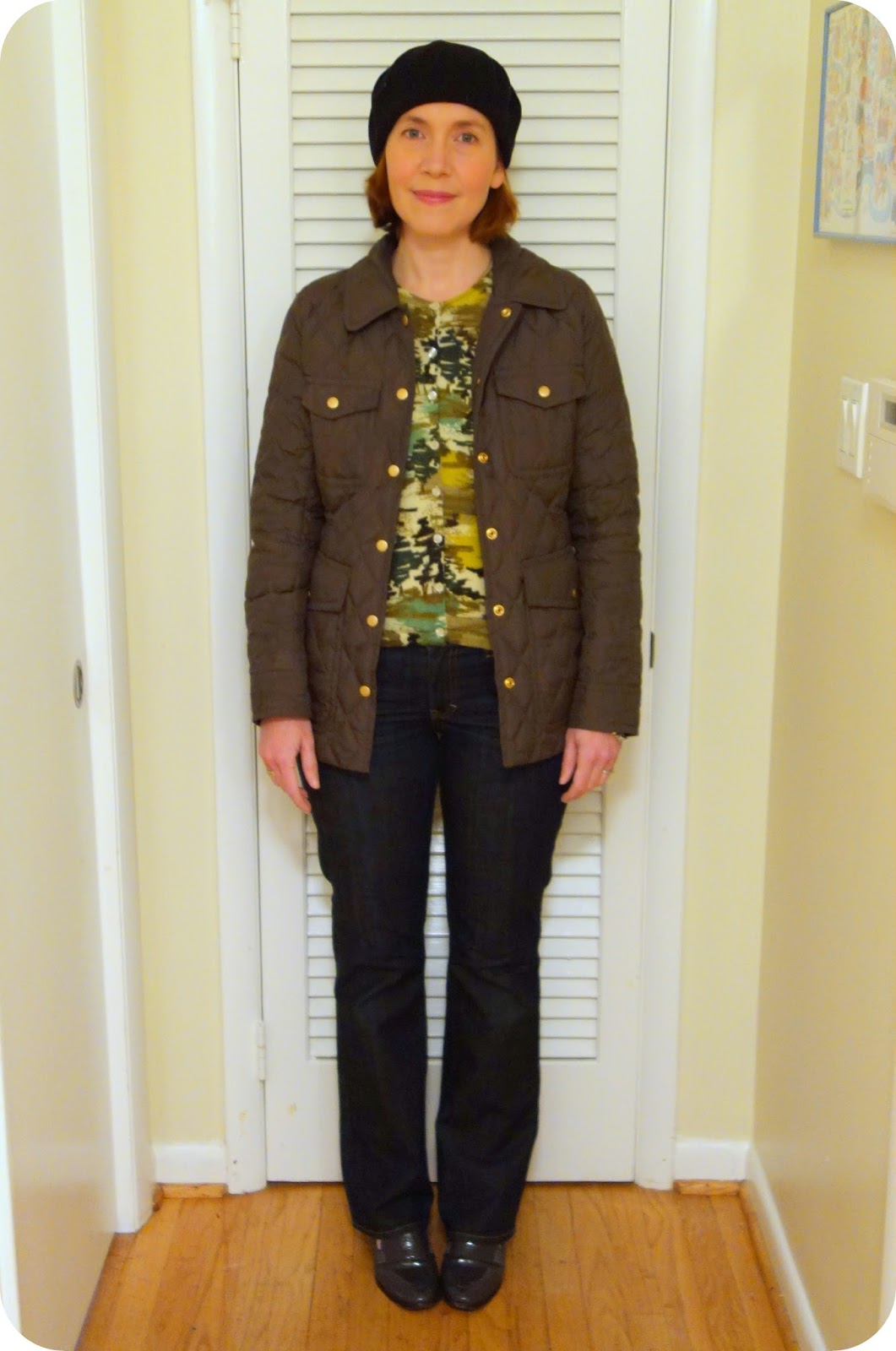 Where:  To say goodbye to my friend, W., who passed away in mid-December.  I blogged more about the death here.  We went to his church in northern Virginia where they held a memorial service in his honor.

Ease of Wear: (4.5 of 5 stars--5 being the most easy to wear.)  In true W. style, we were asked to wear casual clothing to the service since W. was a casual guy who lived in fleece and jeans and boots.  W. also knew that I was (his words, not mine, lol) a "true fashionista," so though I could have worn fleece and jeans and boots, he wouldn't have expected my version of casual to match his.  I had to stay true to what his image of me was, as well as honoring the wishes of his family, so I went with my version of casual, which is exceedingly easy to wear, but since it isn't fleece or boots, doesn't get the full 5 out of 5 stars for ease since the beret, while "stylin'," does start to itch after a while.

Cool Factor: (... of 5 stars--5 being the coolest.)  Not really a necessary score because this outfit is about W. and not about being cool.  I am sure he would have liked the effort, and would be proud to know that I own a cardigan that has a full on forest on it, however abstract it may be.  (He was a lumberjack/nature man/(his words, not mine) manimal, so the more rustic and down to earth, the better.) 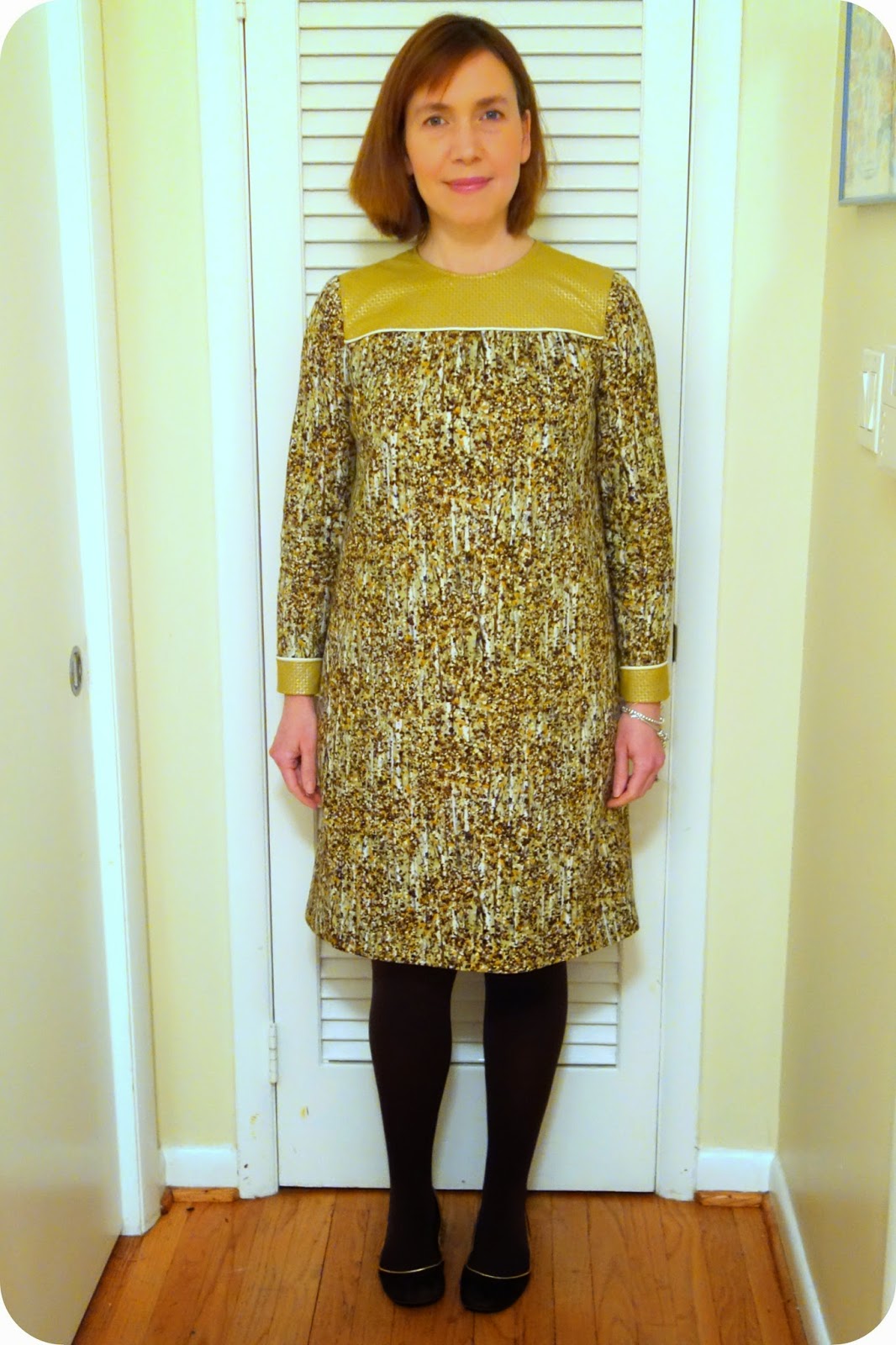 I literally spent days and days crying over W.'s death, as many of you who read here know already.  I didn't know how to process losing him in such a sudden way.  I had kids to watch out for, so that helped me get through the physical hours of the days, but the emotional weight of the emptiness inside was really upsetting.  I had this void of a good friend upon whom I depended for companionship.  He was a tie to so many things in my life, my youth, my love of things "nature," my stupid silly side that I rarely let see the day's light.

I went through our many messages to each other and it struck me that no matter what, he championed my sewing and creative side.  He was very supportive of everything I made, which was odd considering his way of dressing up was to wear a fancy baseball cap and shoes that weren't boots.   Regardless of his own personal style, he loved mine.  So I figured one way to deal with his death was to make a dress in honor of him for the mass that was going to be said for the repose of his soul (my friend, M., set it up for this last Sunday, 1/25/2015). 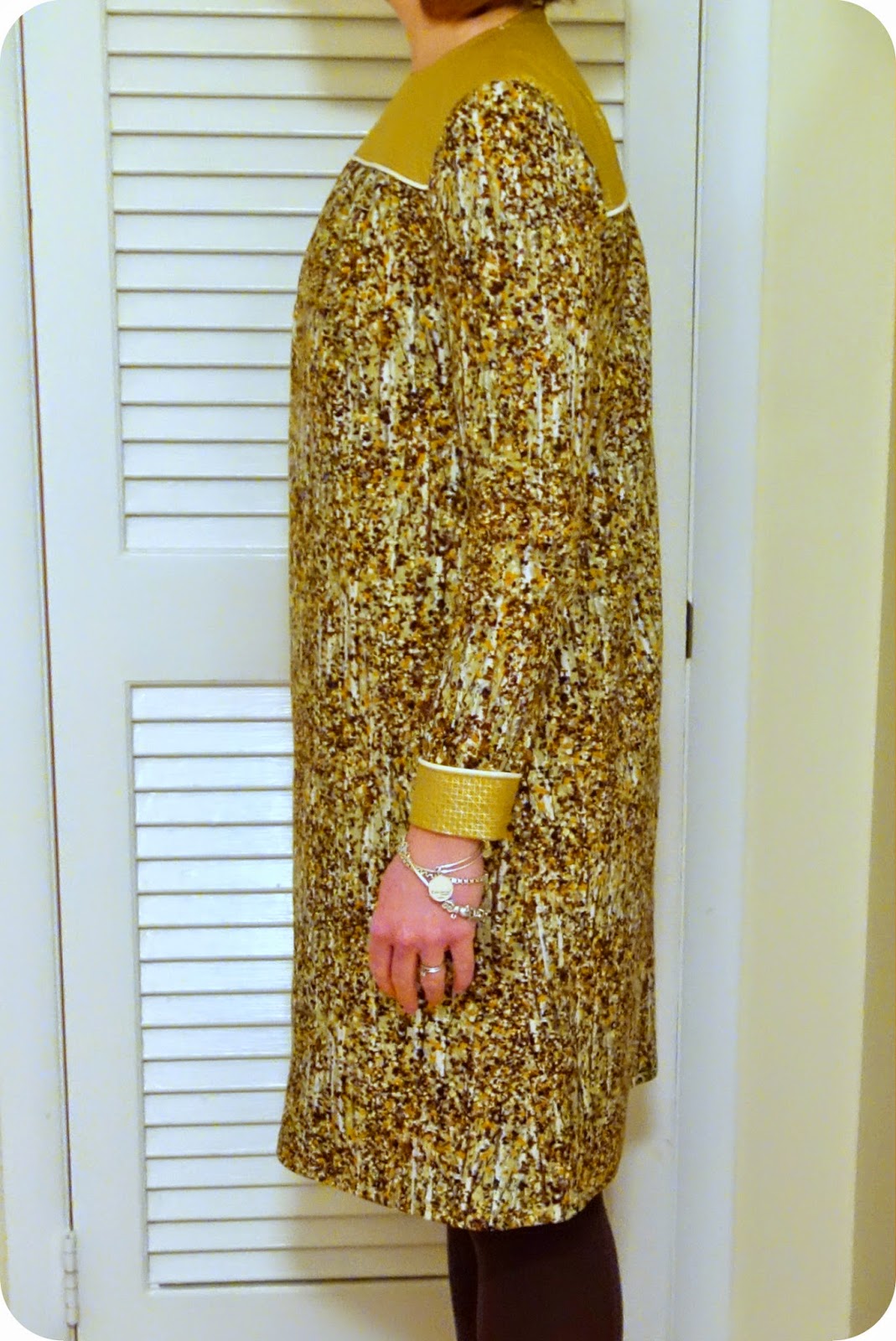 I found two beautiful quilting cottons at fabric.com, the Forest Walk print, and the Cotton and Steel Metallic Netorious Goldilocks that would work well for the vintage pattern I had found to use for the dress, Simplicity 7252 (from 1967).  I wanted the body of the dress to be a forest or tree print, but it had to be abstract, and the Forest Walk was perfect, since from far away it looks more graphic and splotchy than the birch trees they actually are.  The Cotton and Steel fabric is a very subtle silver geometric print on a turmeric colored base, and happens to be an exact match for the yellows in the Forest Walk fabric.  To add some interest, I also included a bias corded piping in ivory at the yoke base and the cuffs.

I made sure to line the entire thing in a slick poly lining so I could wear tights (quilting cottons stick to tights). 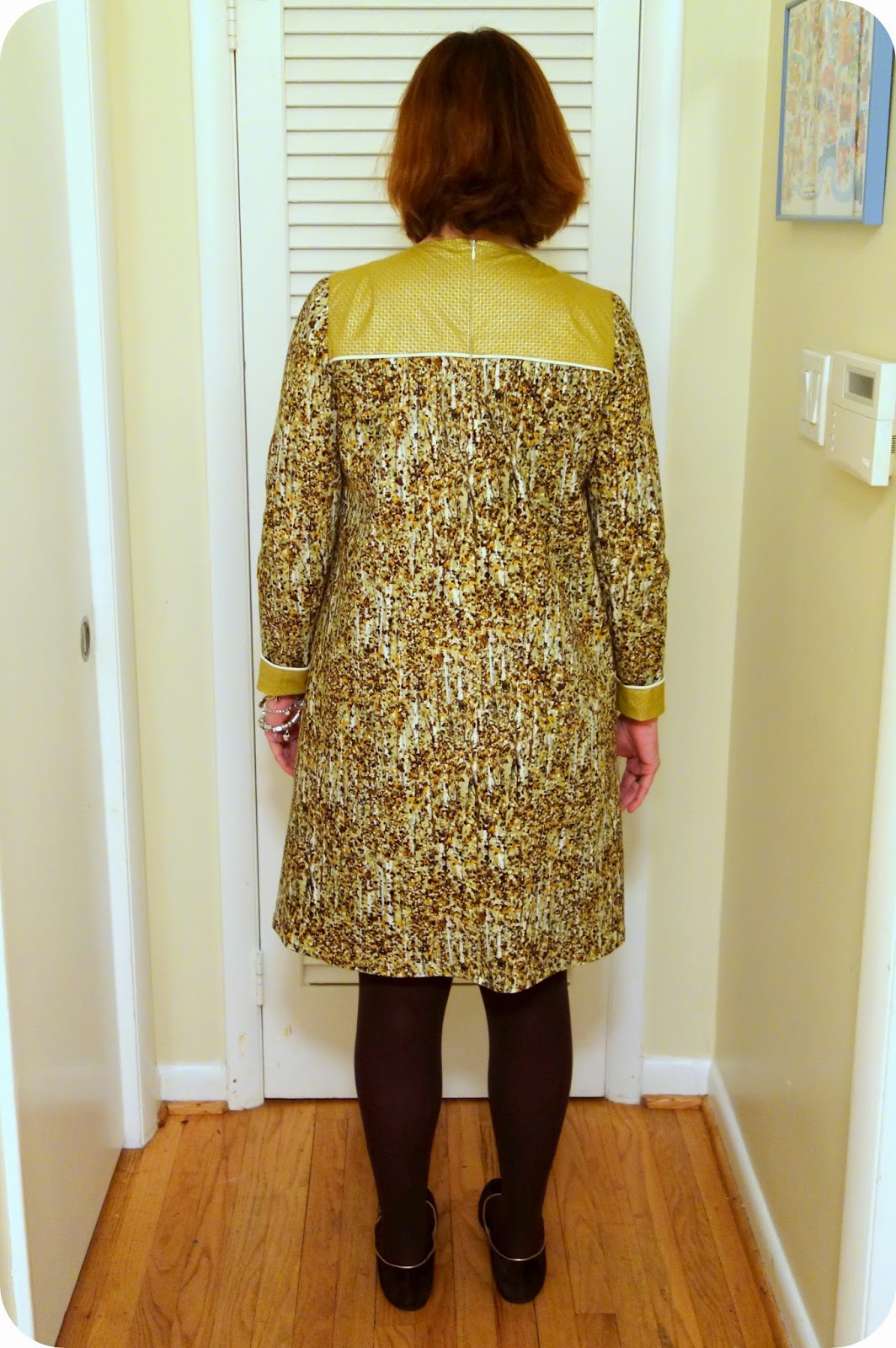 The dress sewed up well, but I did have to take in the sides a whole lot since the ease from the bust down to the hem was excessive.  It was very tent-like.  I wanted the silhouette to match the girl on the cover of the pattern, so I knew I had to take it in to achieve that.  I didn't make a size too big, btw, I went with a size 14, bust 34, and through the shoulders, neck, and arms, it fits fine (after I did a square shoulder adjustment, which is very typical for me), so I think there was just a lot of ease built into this pattern.

If you would like to see more on this project, I wrote more about the sewing side at this Pattern Review. 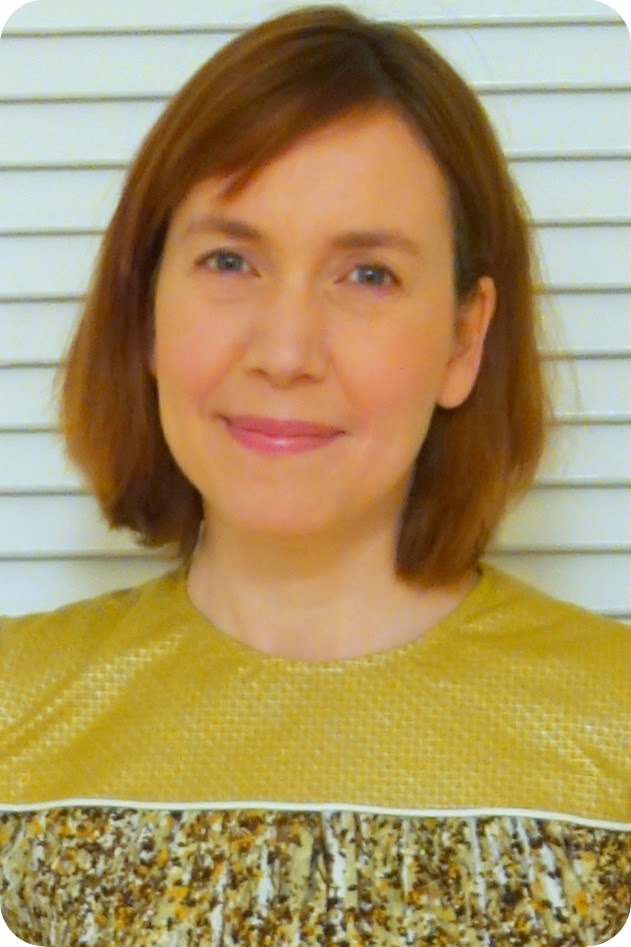 I also made two small bags in the same prints for my friends who also were at the mass.  The three of us have been spending a lot of time watching out for each other in the past month and a half, so I felt like they needed a tangible reminder that I was there for them, too.  It is really easy to whip up zip bags, btw, I basically followed the instructions at this Purl Bee tutorial (with my own pattern--I wanted one that allowed for the two fabrics to be on the outside, sort of like this bag).  I highly recommend using the Purl Bee tutorial if you are ever looking to make a quick gift for someone else and you have scrap fabric you'd like to use. 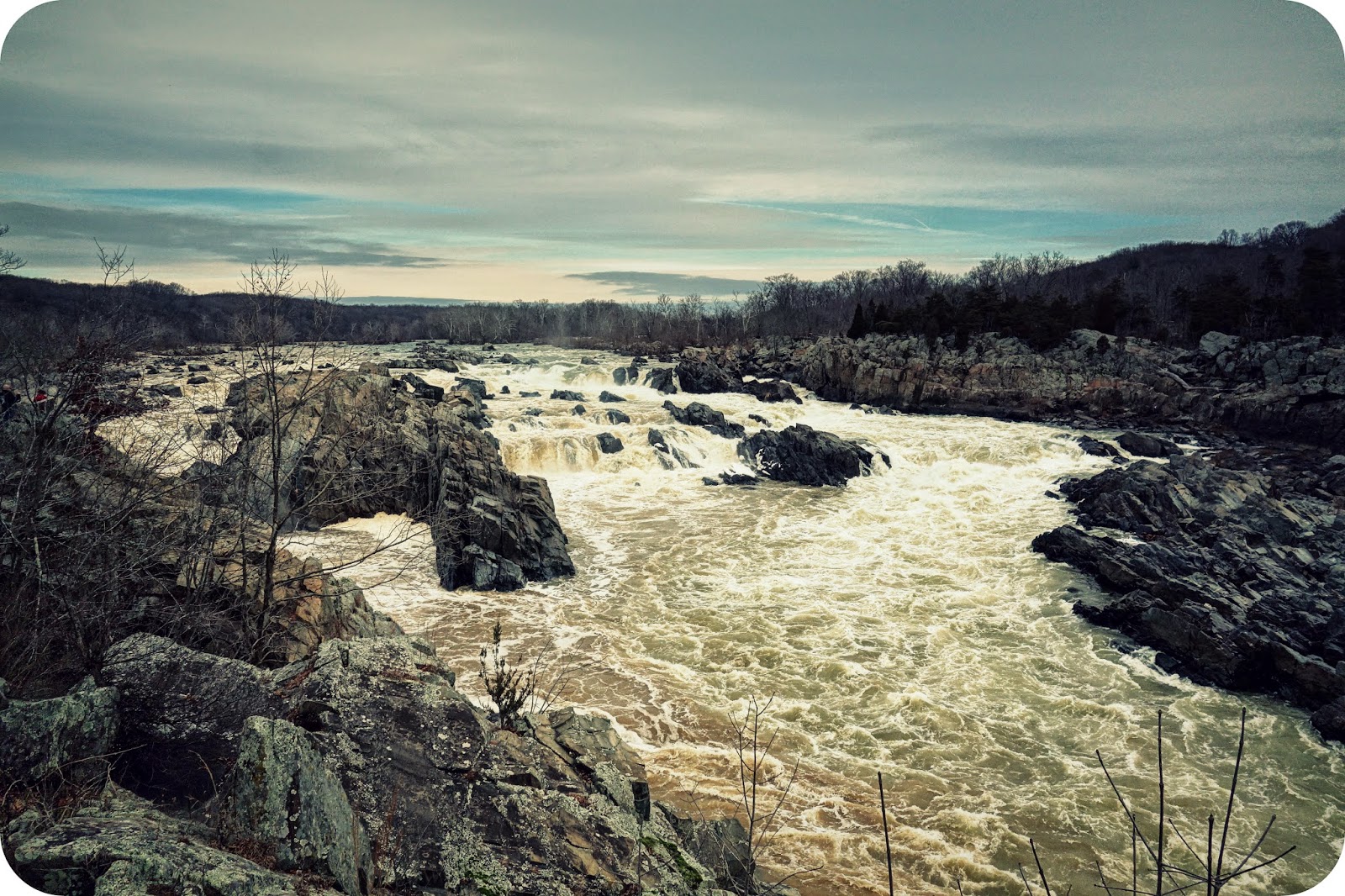 After the mass, four of us friends from high school went to Great Falls, which is a national park here in northern Virginia on the Potomac river, where Virginia meets Maryland.  Above is one of the photos I took that day.  I know W. would really have liked this, in addition to being an all-around outdoorsman, he was a very talented photographer.  I felt inspired by him that day and I was glad that I was able to photograph this moment. 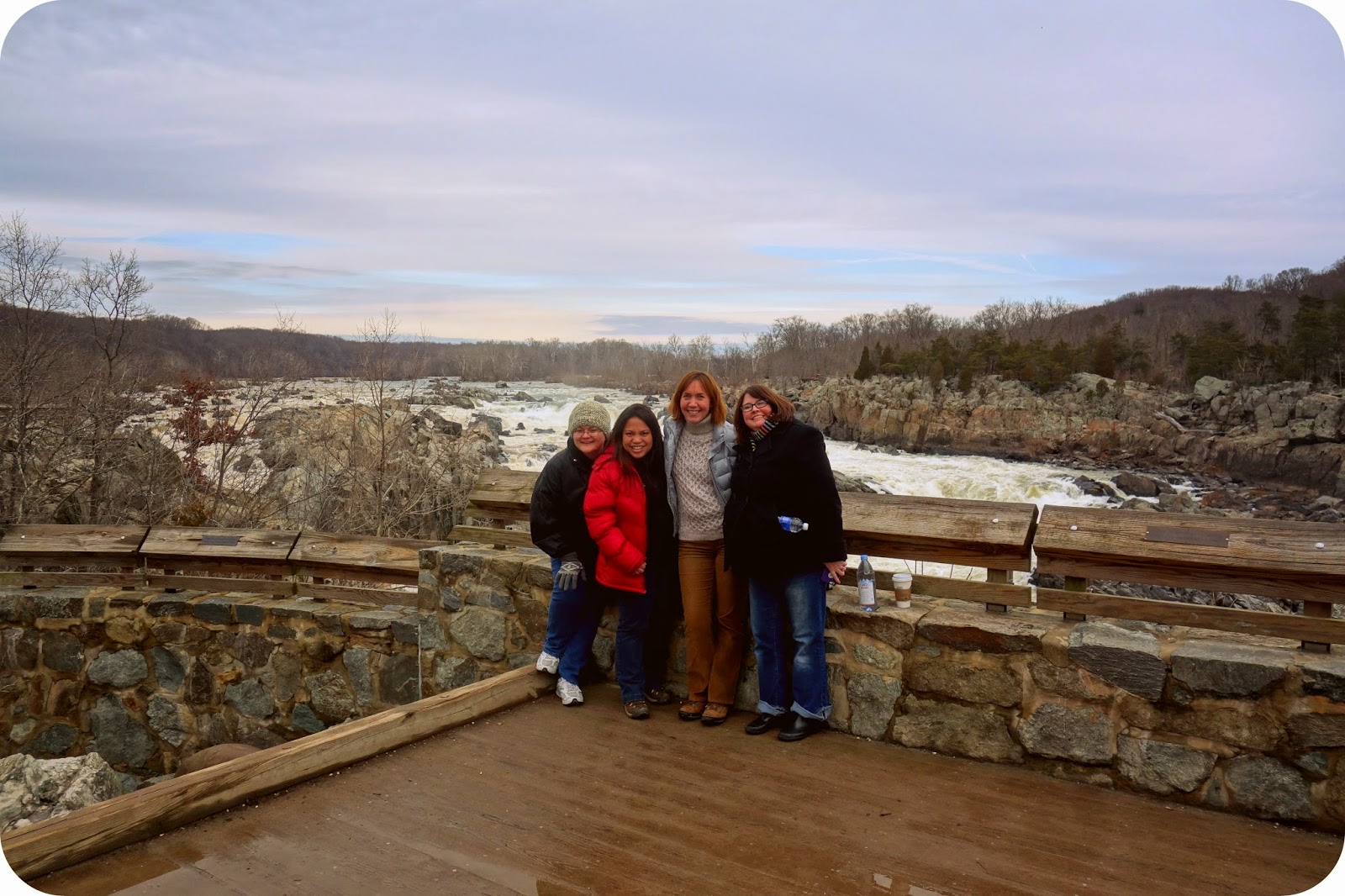 Here are the four of us before we set out to hike that day.

BTW, those boots I am wearing?  Timberland Euro Hikers from 1995.  Yeah, I own some manimal boots myself.  Just don't show them off around here much.  ;-)

You all have a great day.  Enjoy the world outside as much as you can!
Posted by dinagideon at 3:42 PM