Boden: The Curious Case of the Culotte.


Since joining Instagram, I really have been opened to a whole world of new experiences, including the ever present "reposted" Instagram, which happens when a company spies one of their items on a user's Instagram photo and wants to share the image with their followers.  But it isn't exclusive to companies, apparently anyone can repost anything they desire.  I see it all the time.  I haven't partaken, nor had any of my images reposted, but at 228 followers on Instagram, I am likely a long way away from that (reposted images are from people who have thousands of followers, not a couple hundred).  Anyhow, recently I happened upon a "repost" from an Instagram user who was none to excited about an Instagram she saw at #boden_clothing, which featured a cute girl wearing a summer outfit from Boden that included these above shorts.  Or culottes, if you stretch the definition. (Culottes are technically a skirt that has a split up the middle so that is seamed so that they function as shorts but appear to be a skirt.  This pair above don't really look skirt-like to me, at all. Here is a pair of modern culottes that look like what I expect.)

The original Instagram appeared here at Kim Loves Cloth's Instagram account.*  She received many compliments on her embroidered top, and it does look very cute on her, but no comments on her culottes.  The second time this Instagram appeared was at the "official" Boden Instagram page here.  That time the compliments were fewer and farther between, but still a smattering for the top, and at least one, maybe two for the shorts.  The vast majority were very very opinionated and put off that these shorts were even being offered.  The range of disgust ranged from "too 80s" to "why would you do this to a woman?"  Hmm.  The third time (and this is how I saw it) was at the hashtag I use a lot #bodenbyme, which is the one Boden has encouraged us to use to show off our Boden clothing as we style it.

*They were also featured at her blog at this post. 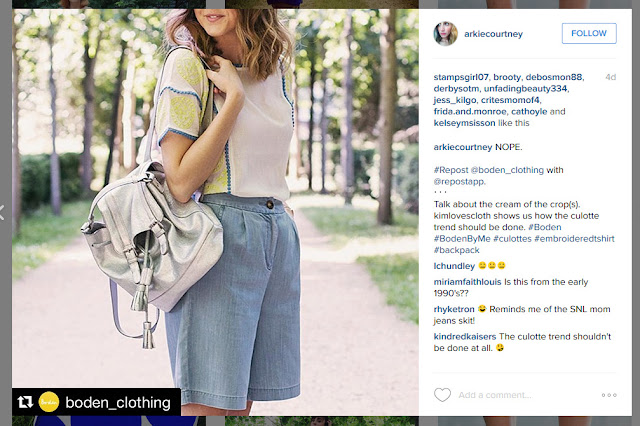 So here it is, in the form that I saw it.  Same image, but presented by an individual Instagram user in a repost (but directly calling Boden out by using the @boden_clothing, so they would see it) at the #bodenbyme Instagram page.  Her thoughts were very direct.  NOPE.  That's all she said.  And that was all that she needed to say.  The comments were actually kinder at this repost than the one Boden reposted, but were still not incredibly positive regarding the curious case of the culottes.

I have my thoughts, but I am curious about yours?  What say you on the culottes?  :-)
Posted by dinagideon at 6:25 PM