OOTD/Made by Me File: The Two Hour Dress: McCall's 6886 in a Colorful Tribal Print ITY Knit. 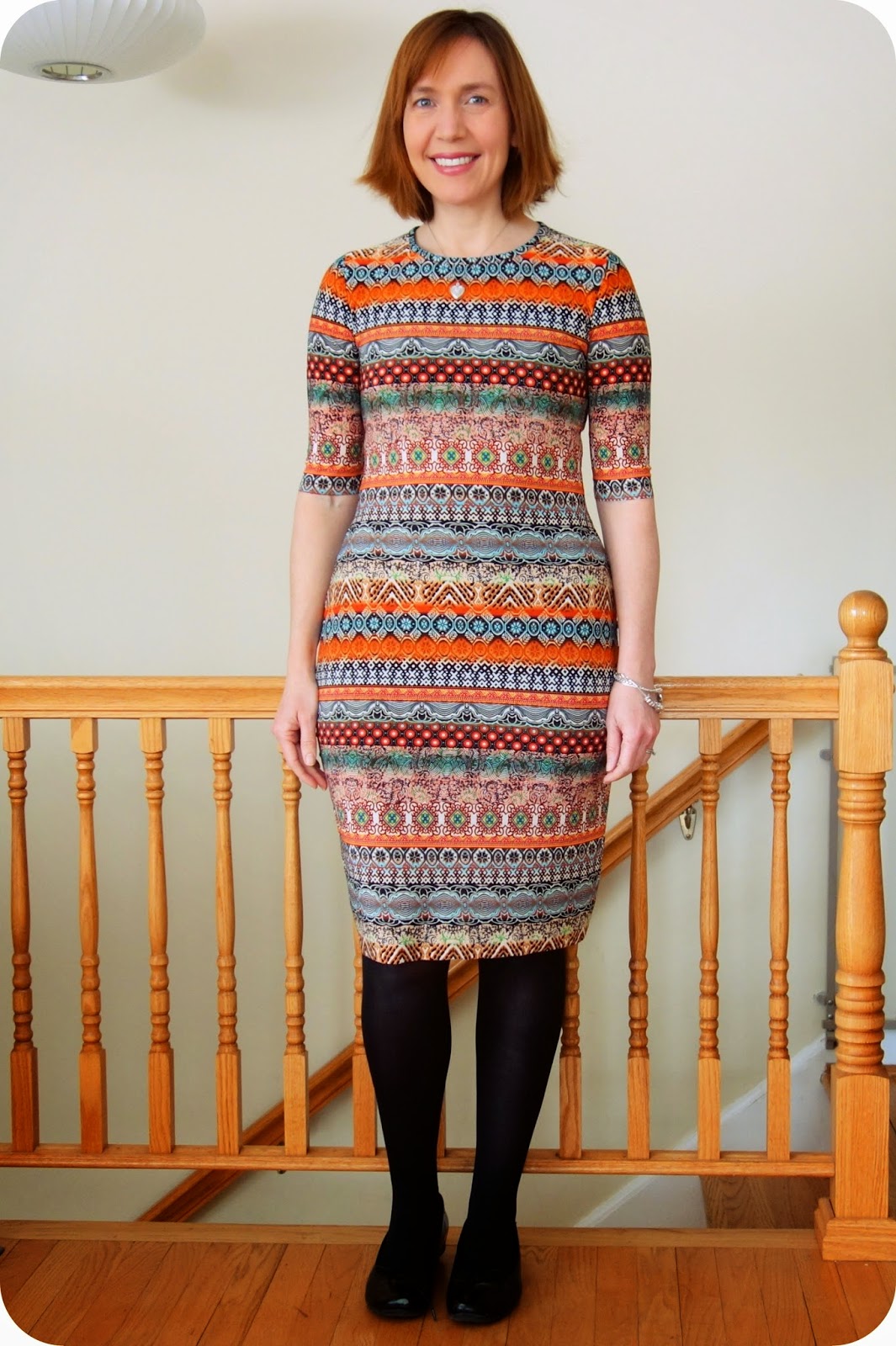 Where:  Mass and Dinner at Chick-fil-A (living the life, you all).

Ease of Wear: (4 of 5 stars--5 being the most easy to wear.)  If the ITY knit had NOT stuck to my tights, I would have given this a 5 out of 5.  But, nooooooooo, stupid Virginia is going through a stupid cold/dry/winter is NEVER EVER going to end phase, and the static electricity is at an insane high.  My hair, even with all of its thickness, is falling prey to this, too, and will stand on end whenever it wants, usually in front of a crowd of people.  (You should see my kids, it is way worse on them, especially Angus with his baby hair.)


That said, in the house, where the humidifier is properly working to pump moisture back in the air, the dress doesn't cling to the tights, and feels so comfortable.  And crazily enough, for the thinness of the ITY knit, it keeps me warm, too.

Cool Factor: (4 of 5 stars--5 being the coolest.) I really love it, and I think the bodycon style works for my frame (which surprised me, especially with my pear shape), but I think tribal prints and bodycon went out a few years ago, so probably not "cool" anymore.

Anecdote of the Day:  Rex hasn't been to mass since the accident since he has either been in pain (first week), or uncomfortable and unwilling to move (second and third) week.  But he had to get out on the 28th since he was set to receive his First Penance that morning, and after we saw he could manage an hour in the handicapped pew (in his wheelchair), we knew he would be fine at the the mass later that night.  The handicapped pew combined with Rex looking older than he is meant that the extraordinary minister wanted to give him Communion, which he has not received yet (his First Holy Communion is in May).  I had no idea they would try to give him Communion, and he stared at the man and was all, "no, I can't get it yet!" 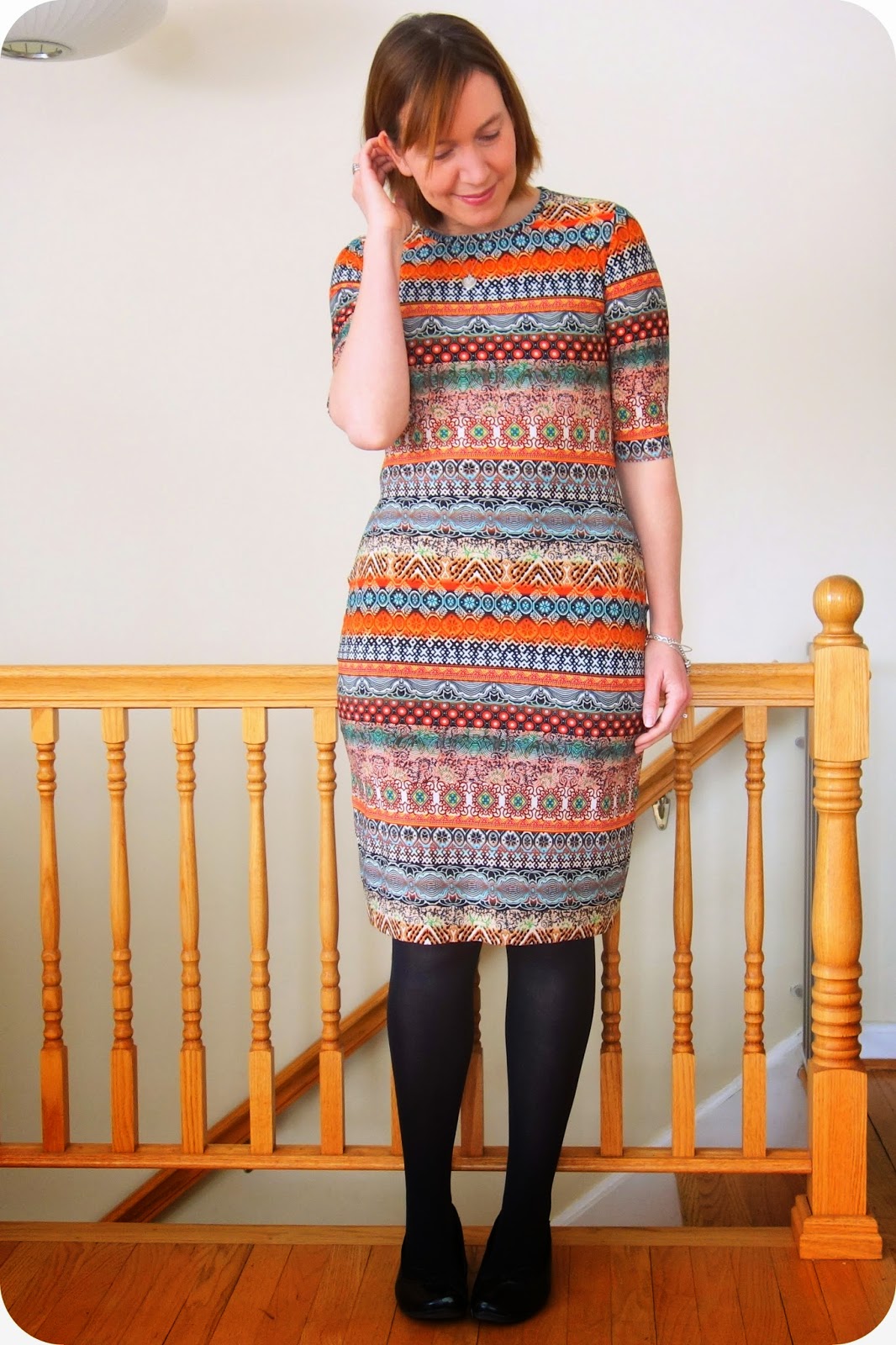 McCall's 6886.  I made this dress on the fly because I was so sick and tired of working on my son's First Penance blazer project (Burda 9452), which you can see in the last photo at the end of this post.  That blazer is a very classic blazer, which means a two part sleeve, full lining, proper set-in sleeves, darts, roll line, collar, and so on and so on.  I needed the break from all the navy blue wool!

I figured I would like to make up a knit dress in something colorful, since nothing cures the winter "blah" as much as bright cheery colors.  So I looked through my pattern shelves, and into my fabric closet and spied two that would work very well together (at least in my head they looked good together).

It seriously only took me two hours from cutting to sewing/serging to finishing to get this dress done.  Admittedly I decided to leave the sleeve and skirt hems raw (but even and tidy), but even if I had decided to hem them properly, it would have only added on a half hour, tops.  This knit doesn't ravel and it doesn't curl, so it is the perfect fabric if you ever decide to try a raw hem yourself. 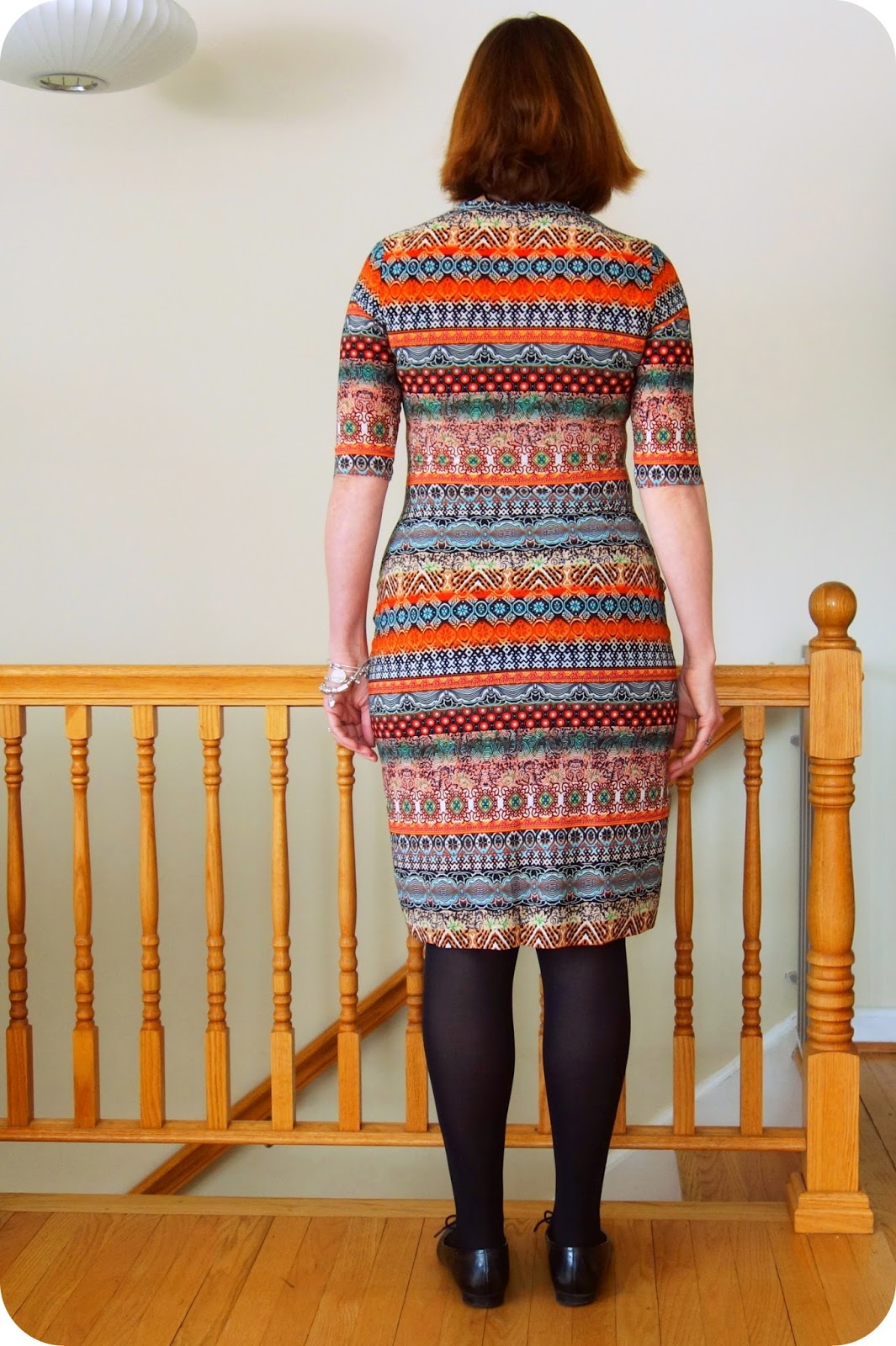 A big chunk of the two hours was spent making sure I properly laid out the fabric so I would have the right horizontal lines at the right places.  I knew I wanted the brighter colors at my shoulders, waist, and higher hip, and the darker, more muted colors at my low hip, so that my hips wouldn't be over-highlighted.

I also had to make sure the would match up at the side seams, which you can see in the next photo. 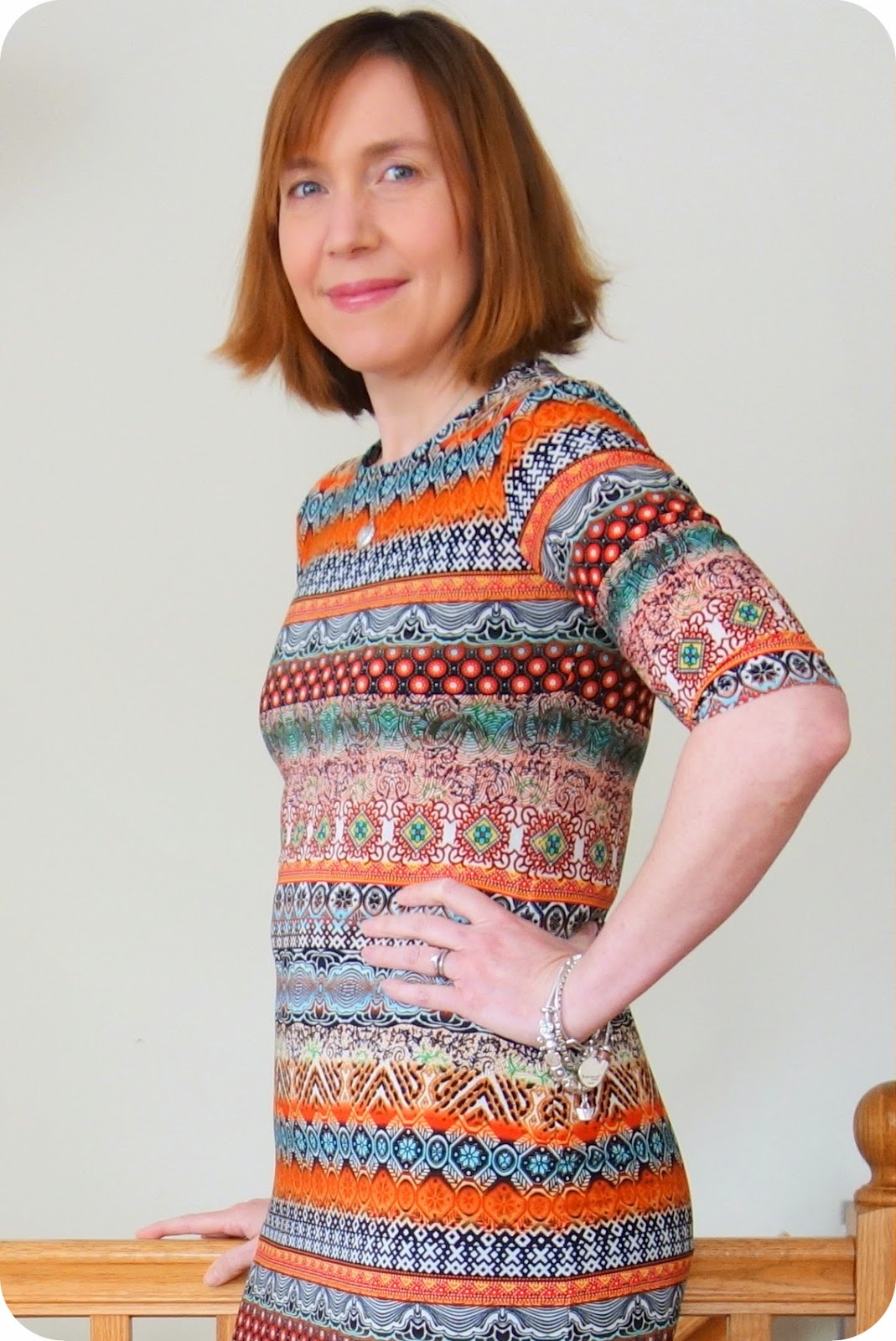 I did make a neckband as opposed to turning the neckline and stitching (that's what the directions wanted me to do).  It looks like it sticks up a touch here and in the next photo, but that is only because I have my hand on my hip...it stays flats 90% of the time, and you can see that in the second to last photo.  I decided to make the neckband two inches tall by nineteen inches long, which when seamed into a circle and pinned into quarters, makes for a non-saggy, flat-lying neckband.  I felt like a champ when I successfully made this neckband, since neckbands are usually my big problem in making knit clothing.  (I really like using the 7/8ths rule for the neckband, seems to be the best solution for making them.) 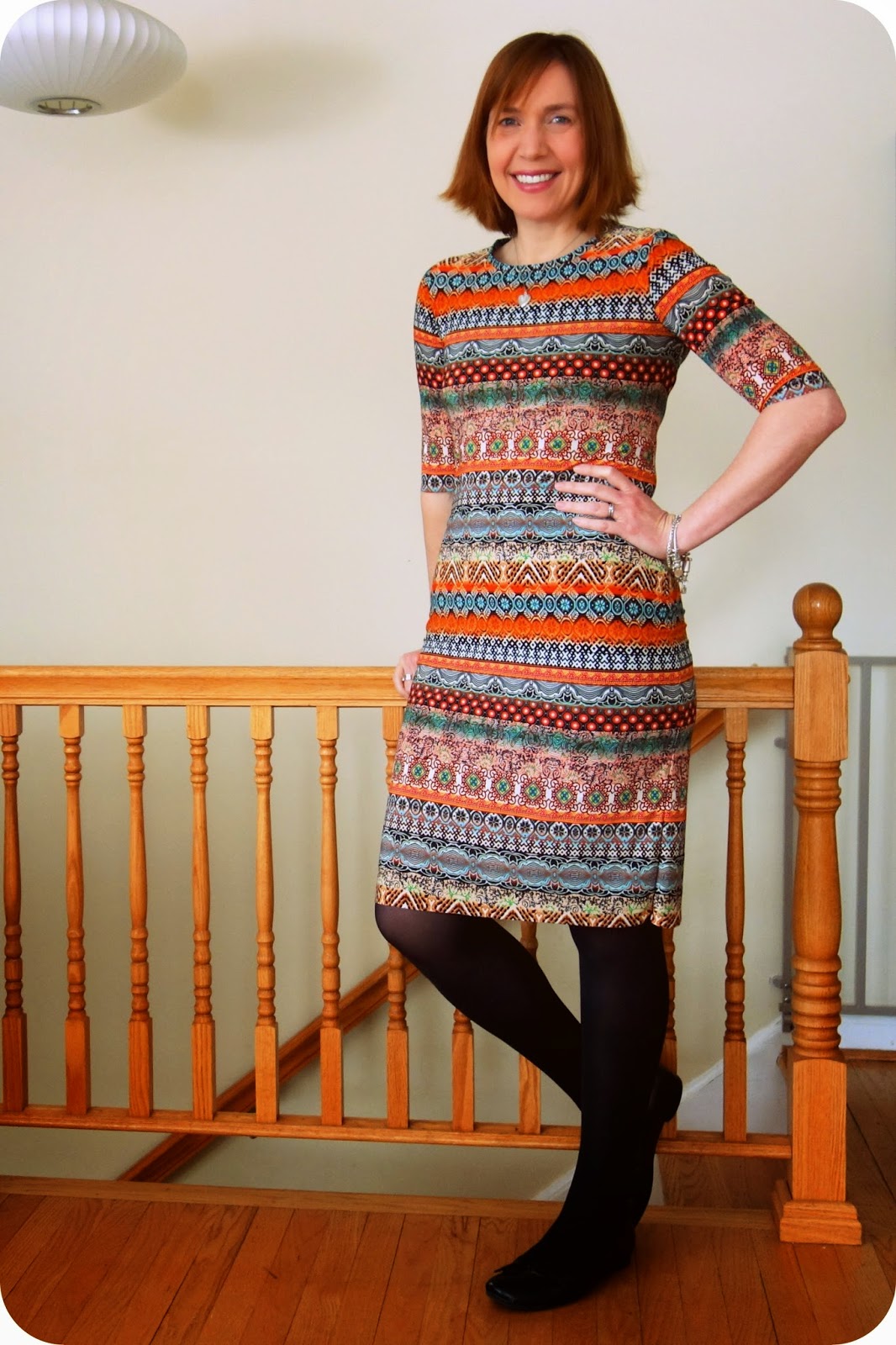 I sewed up the size 10 at the bodice and then made sure to carefully grade out the pattern from waist to hips from the size 10 to 14 so that my curves would be skimmed by the fabric and not stretched to the full capacity because I chose to let the ITY stretch do its job in the 10 versus cutting my proper size.  I think I made the right choice since the color and stretch stays the same throughout the garment, rather than being brighter and less stretched at the bodice and duller and more stretched at the skirt.  (I hope what I am describing makes sense.) 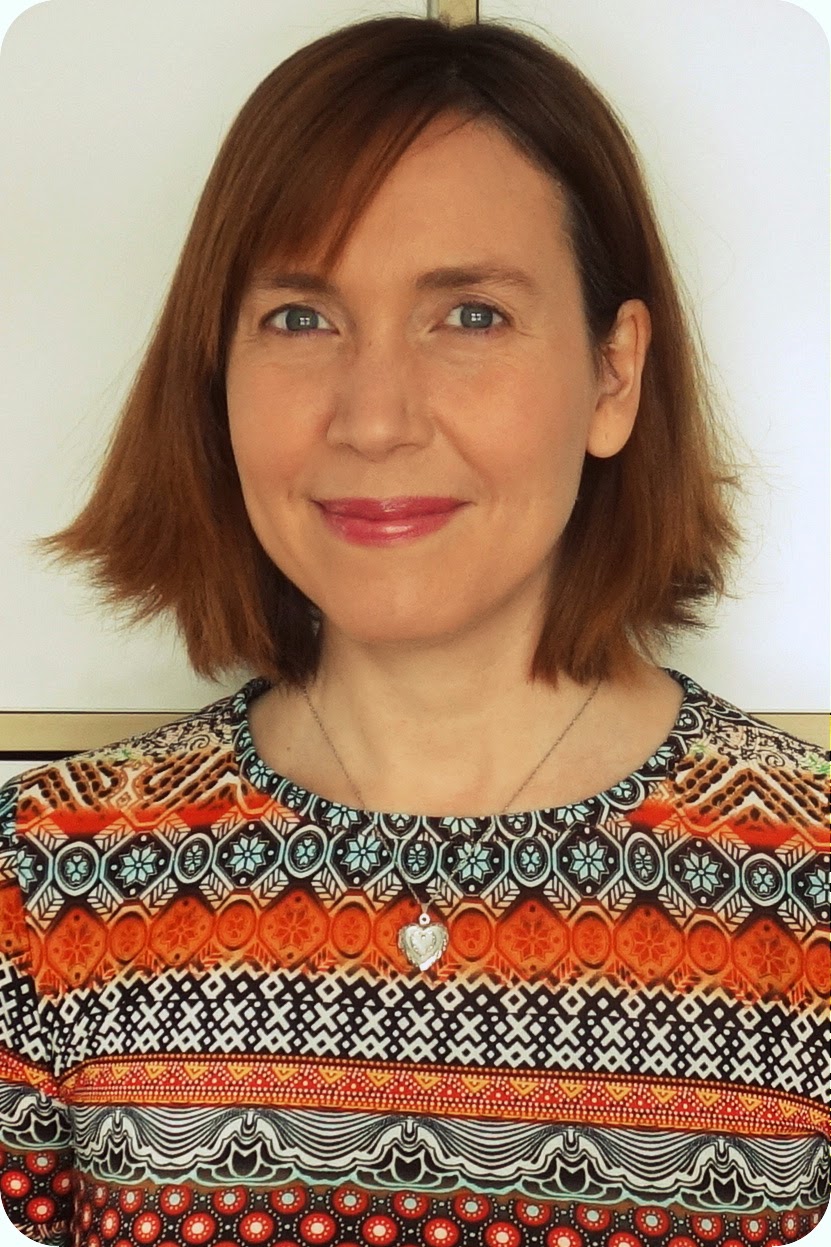 Here is a close-up of the fabric (bought for $3 a yard at Fabric Mart last year--here is a selection of tribal prints they have right now).  You can also see the neckband laying flat here, too.

I wrote more technical details, etc., here at this Pattern Review if you want to read more about the dress construction. 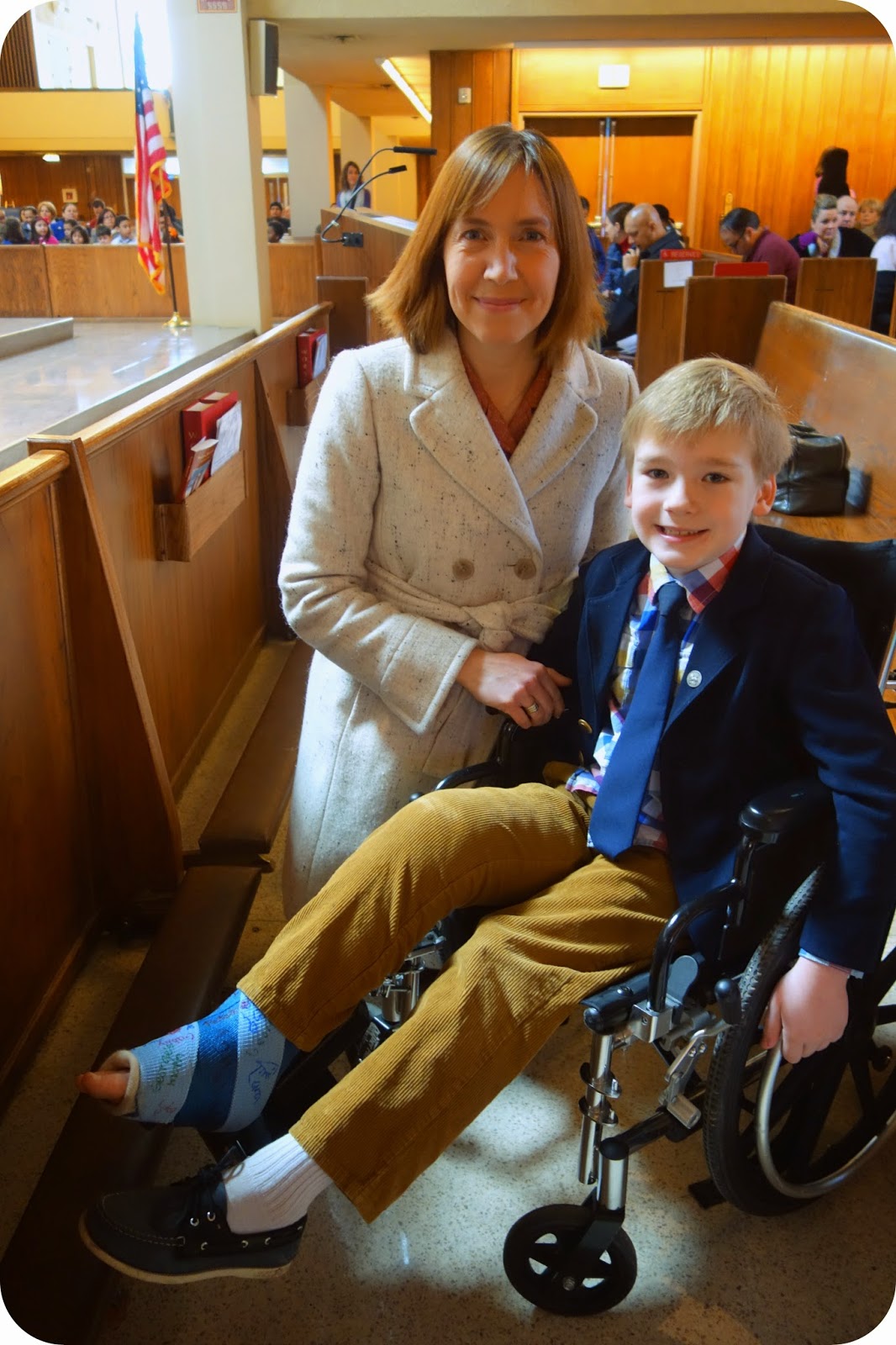 And before I go, here is a photo of Rex after he successfully gave his First Penance.  :-)  The blazer I made has on its lapel the pin he received for partaking in this sacrament.

You all have a great day!!! Be back later!
Posted by dinagideon at 1:43 PM