Okay, I may not know who Lenka is, but I do know what TWS stands for...one of my favorite bands from the 90s (who got their start in the 80s)...Toad the Wet Sprocket. They sang songs like "Walk on the Ocean..." and "Something's Always Wrong..."

Two weeks ago, on Thursday, May 21st, I went to see them for the SECOND time (yes, second, first time was in 1994) at the National Harbor across the river in Maryland. Except we didn't drive there...we took the boat. Listen up...if you live in Alexandria, consider taking the boat. The night we went it was PERFECT weather and the sun was setting in the west as we approached the dock at National Harbor. Even this hardened married woman was touched by how romantic it was. Once there we walked around (Mr. Dina and I, although we could have brought the kids, they were allowed to go, shocking, I know...), went in some shops, watched the beauty of the river, etc. Let me just say...the National Harbor is awesome. And it is in PG County which has a reputation for being a bit rough (not all parts, obviously...). So get thee to this corner of our lovely area...definitely worth it.

Also, it was great seeing TWS in concert...again. They did not disappoint. I think more folks were there to see Eddie from Ohio (a local, very awesome group), but there were a few of us that REALLY got into TWS. It is funny to see thirty-somethings that are kinda crunchy/granola dancing around to this band. Very nostalgic but in the end sort of funny to watch.

Also very beautiful was the actual SUNSET as the concert played. The view over the water from the venue was immaculate. Even the band admitted it was one of the best views they had ever had while playing!

This is what I wore on this date:
Anthropologie top from 2006? Maybe? Does anyone know?,
J. Crew Summerweight Stretch Bermudas from Spring 2009,
J. Crew Brigitte Metallic Heels in Atlantic (which I later switched to flip-flops...okay, I'm a wimp...I admit it). 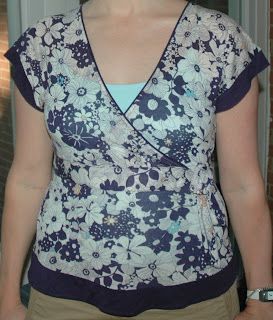 Toad is one of my favorite bands! A few years ago I saw their singer Glen Phillips in Philly and he was amazing. Have you heard his solo stuff? Definitely worth checking out. You look great!!

Dina, you should wear a drop earring more often. That style really looks lovely on you!

Haven't been over to the NH yet, but we did drive by one afternoon on our way back from Fairfax. This summer I would love to check it out! Glad you had a nice time at the concert :)

I was really into them in college. :) And I LOVE your outfit--such a great date look!

Wow, you look gorgeous! Love those shoes, and the earrings are fab. Nicely done! Glad you enjoyed the show.

Love the outfit - you look great. Sounds like a wonderful evening!!

That concert outfit makes you so lean and long, Dina! Hot look! ;)

I've heard a lot of horror stories about the National Harbor; so it's refreshing to hear a good testimony. 'Will definitely have to plan an outing soon!

And who you callin' crunchy??

You look so happy and radiant in your picture! Love the outfit and happy to hear you had an amazing evening.

Sounds delightful! What a great night.

And you are looking SO skinny! Way to go :-)

Love the outfit with the heels and shorts! Sounds like such a fun event. :)

Hi everyone: You all seemed to really like this outfit. Frankly, I was surprised. I mean I liked the way it turned out but I kind of thought the photos didn't do the outfit justice!

Stylestance: I haven't heard Glen Phillips solo stuff...when I get a bit more time I will check it out...he has an amazing voice!

Drewablank: You need to expand on this whole "horror story" thing...I did notice a lot of police there but didn't think much of it...huh!

Nanci is one of my all time favorite songs! I love TWS!