We were spared loss of power, loss of trees, and all the other ills that typically come from severe weather, so I am very thankful for that, however, I do want to express my deepest sympathies for all who did not fare so well during Hurricane Sandy.  I am saying prayers for all of you affected, and my greatest wish for you all is that life returns to normal as quickly as possible.

We are headed back home tomorrow, just in time for trick-or-treating, but since I have a spare moment I thought I would review a sweater I recently received during the last 30% off promo that J. Crew had, the Collection Cashmere Polka-Dot Sweater.  This will also from now on be referred to as the Zooey sweater, as the whole reason I purchased it was because of her (Ms. Deschanel, that is). 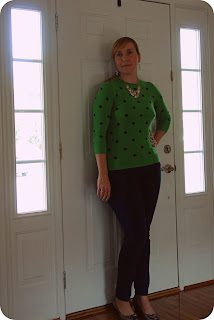 We were watching New Girl about two weeks ago, and Zooey's character on the show (who we all know is just her playing herself--SO kooky!) was wearing this sweater.

Mr. Dina (he of the white tennis shoes brigade) announced, "ooh, I love her sweater, so cute!"

I side-eyed him in disbelief.

"You do know that is a J. Crew sweater, right?"

And because I had my computer open, I sought it out, discovering it had been on sale, but of course, because it was SO CUTE, all the JCAs of the world had already snapped it up.

But two days later, the sale had a replenishment, and lo and behold, I saw the sweater, in my size, in the SO CUTE color, that it had an additional 30% off, and it was sort of no-brainer...I could at least try it for my hubby.  ;) 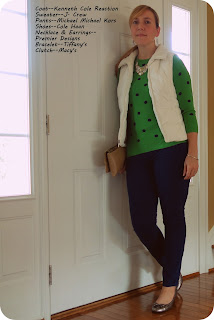 Size extra small.  I was nervous about the size.  Even though most of my cashmere of the past two years has been extra-small, I had read that J. Crew was stepping away from vanity sizing, so I feverishly checked all the JCA reviews of this sweater (there are many), and then I decided I should be okay (but definitely aware I may need to do a return).

It turned out that it fit great, length, through the shoulders, in the waist, and through the bust.

It is also very soft, and nicely made.  I wore it all day today and have not seen any pilling, so that's a bonus in the world of J. Crew cashmere (collection or not).

The dots are actually sewn into the green cashmere, you can't feel it, but when the garment is turned inside out you can see the construction.  I suspect this is part of why it was a bit pricier than other cashmere garments.  However, the full price was very high, so I was happy that I was able to pay around half that, which works far better for my budget. 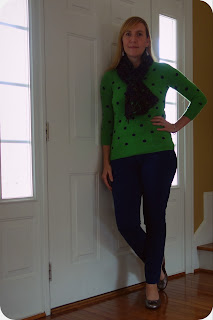 I had started my day out with the idea that I would need the down vest, but it became very clear that with the wind, the scarf would need to be on as well, so as to cut down on the chill a bit (when the wind wasn't blowing, it was 55 degrees and sunny, but with the wind, it felt like 45).

Anyhow, this Zooey sweater is currently in the sale section with the wine/pink colored version, and the grey/black version is still full-priced.

Hope this helped someone out!  :)

(I explained why I am doing one preview pick of the day in each post when I wrote this post--under #3.  Of course I totally forgot to do a pick yesterday, so I will just do two now.  Sigh.  Mommy brain.) 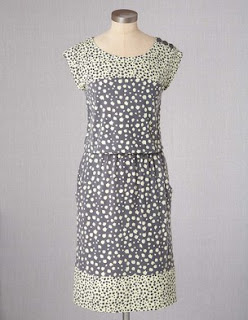 Adelaide Dress.  This dress is very different, and in a good way.  It has Boden's typical print frenzy, but in a very nice, easygoing shape that works for many body types.  And unlike a lot of Boden frocks, this one has a waist that sits at where most ladies waists are.  Since only a few women can pull off the empire waist, it is nice that Boden is offering options that work for more people. 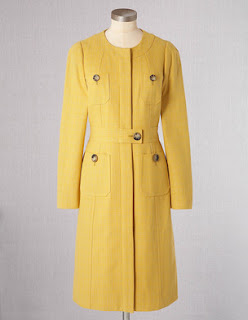 Draycott Coat.  Since this is a J. Crew centered post, I thought I would pull out a coat that very much reminds me of "Old School J. Crew."  Help me, ladies, which coat is it that is similar to this one?  I think it was yellow and had a bow closure at the neckline?  Am I just crazy?  Anyhow, this is one stunning coat, and the tabbed waist detail is very slimming and lady-like.

That's it!  Talk with you tomorrow!

Have a great night!
Posted by dinagideon at 9:53 PM