Hi!  Happy Thursday.  :-)  I have been nose to the grindstone, and with great concentration, furiously sewing up my son's suit for his First Confession on Saturday.  I started the project last week, and whenever I could find the time, I worked on the blazer.  I am *still* working on the blazer, but at least the shell is done, I just need to finish the lining.  I am actually insanely proud of the work so far, but I won't exhale until the finished product is being worn by him on Saturday.  Anyhow, wish me luck, and I hope that explains a bit of why I have been away so much lately.

Also, NADA is going on with Boden, sale wise, so there's that, too.  I had plans to do the Boden Weekly (haha) Review Roundup this week, but with the details I need to follow to the tee with the blazer pattern, I realized something had to be given up.

Okay, I do have a few brief moments to show off a few recent dressier outfits I wore in the past two months.  I have definitely been more focused on casual wear, especially since Rex is housebound and I am going nowhere, but there have been a few occasions that required me to give a little more effort than a pair of Turner pants and an embellished sweatshirt. 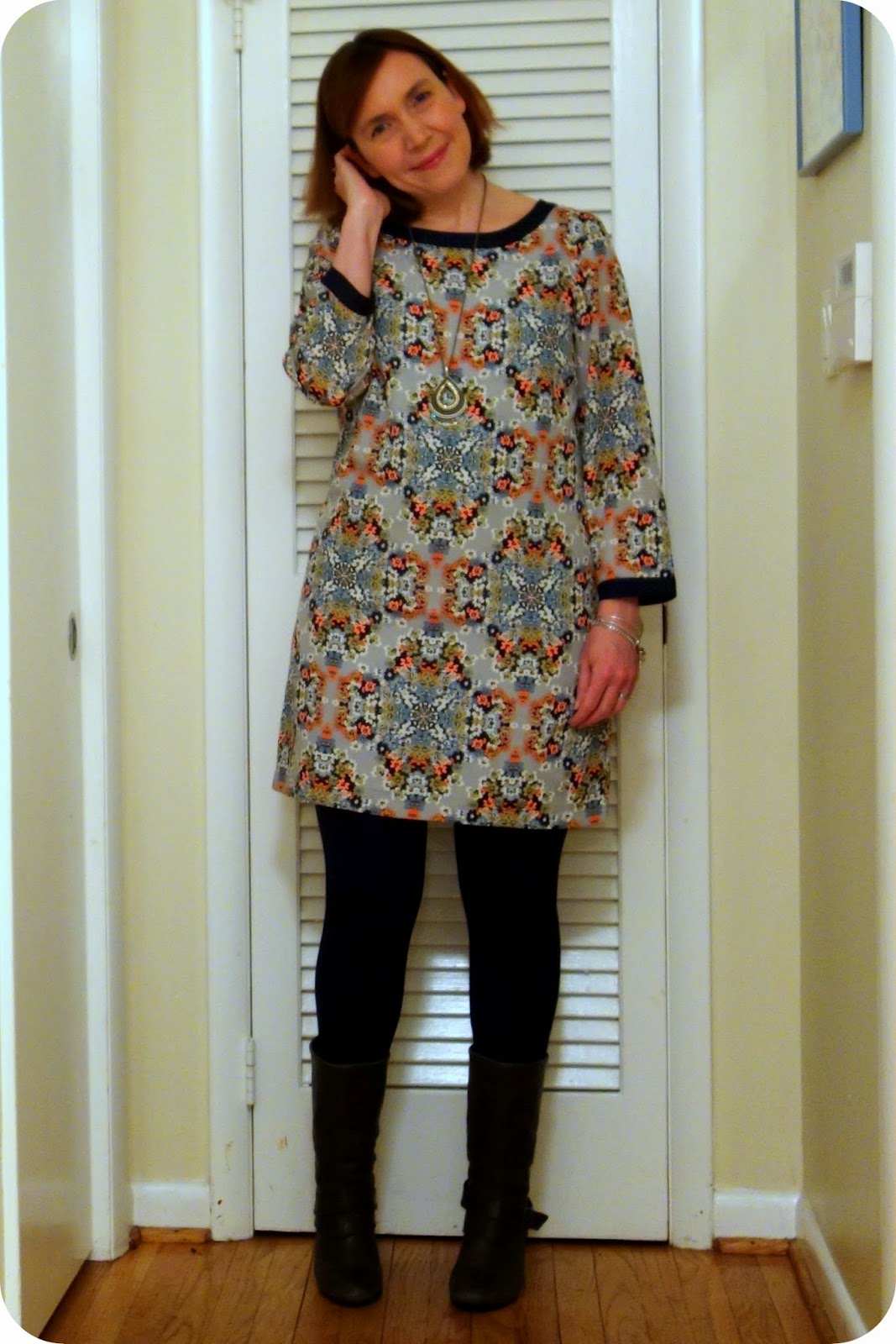 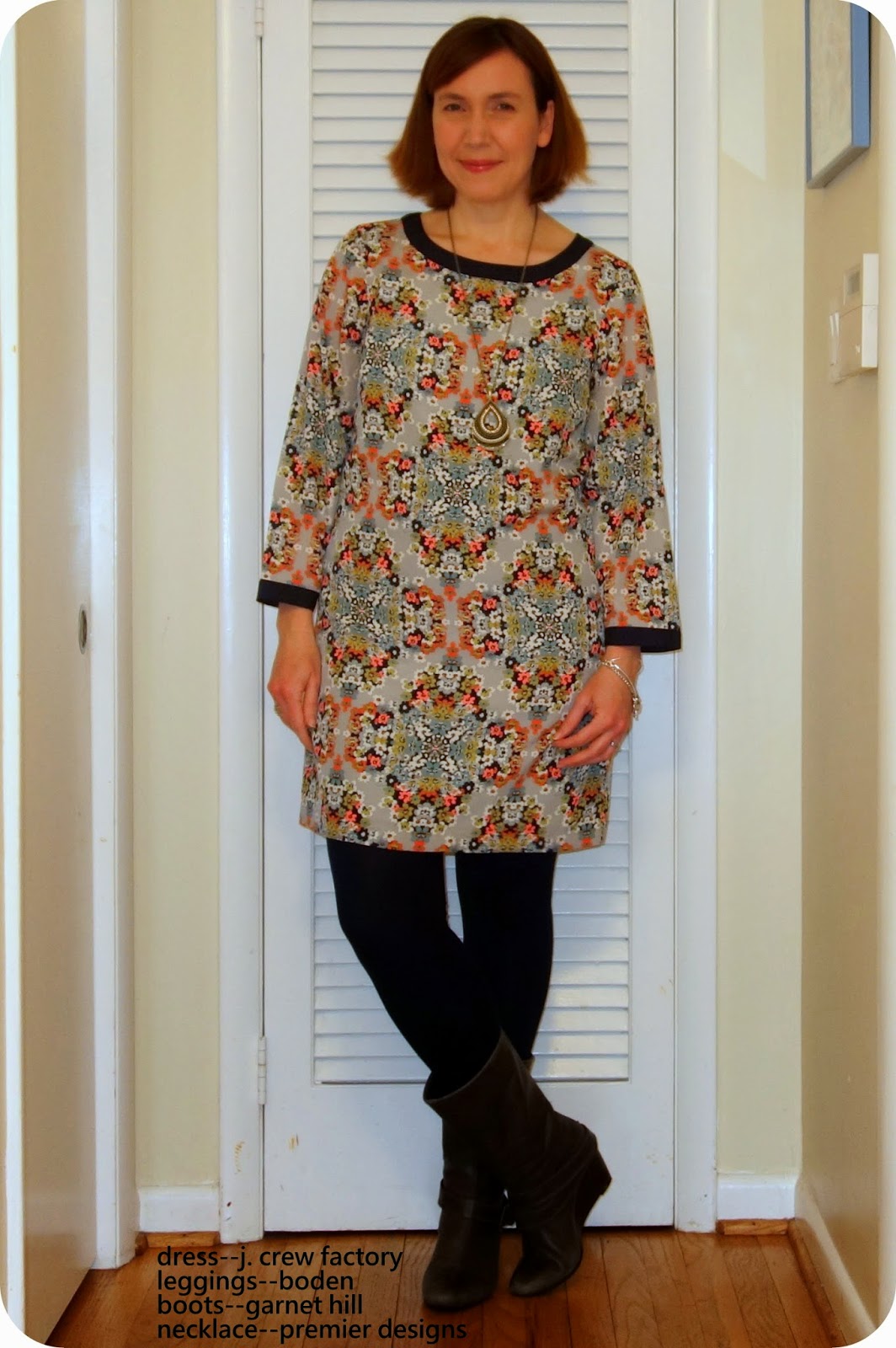 Where:  Fairly certain I went grocery shopping with the Angus that day.  This was before Rex got injured (that happened 1/25), and I saw I took photos of him fooling around the house that day, so because I got dressed up and I have photos of him at the house, I have to assume that Harris Teeter was the reason for my "dress up."  LOL.

Ease of Wear: (4 of 5 stars--5 being the most easy to wear.)  I never know what size to get at J. Crew or J. Crew Factory when it comes to these straight shift style dresses (this one is the Factory Printed Shift Dress).  I always know that the bust and shoulders will be too big unless I get a size 4, but my hips don't lie and are a size 10, so that's what I chose to purchase.  That was a wise choice, but I still could use a half-inch more if I am being honest, I would prefer just that little bit of extra ease.

Cool Factor: (4 of 5 stars--5 being the coolest.)  Love this look.  I need to wear this again before it gets too warm (ha, no threat of that here in Southern Canada aka Virginia). 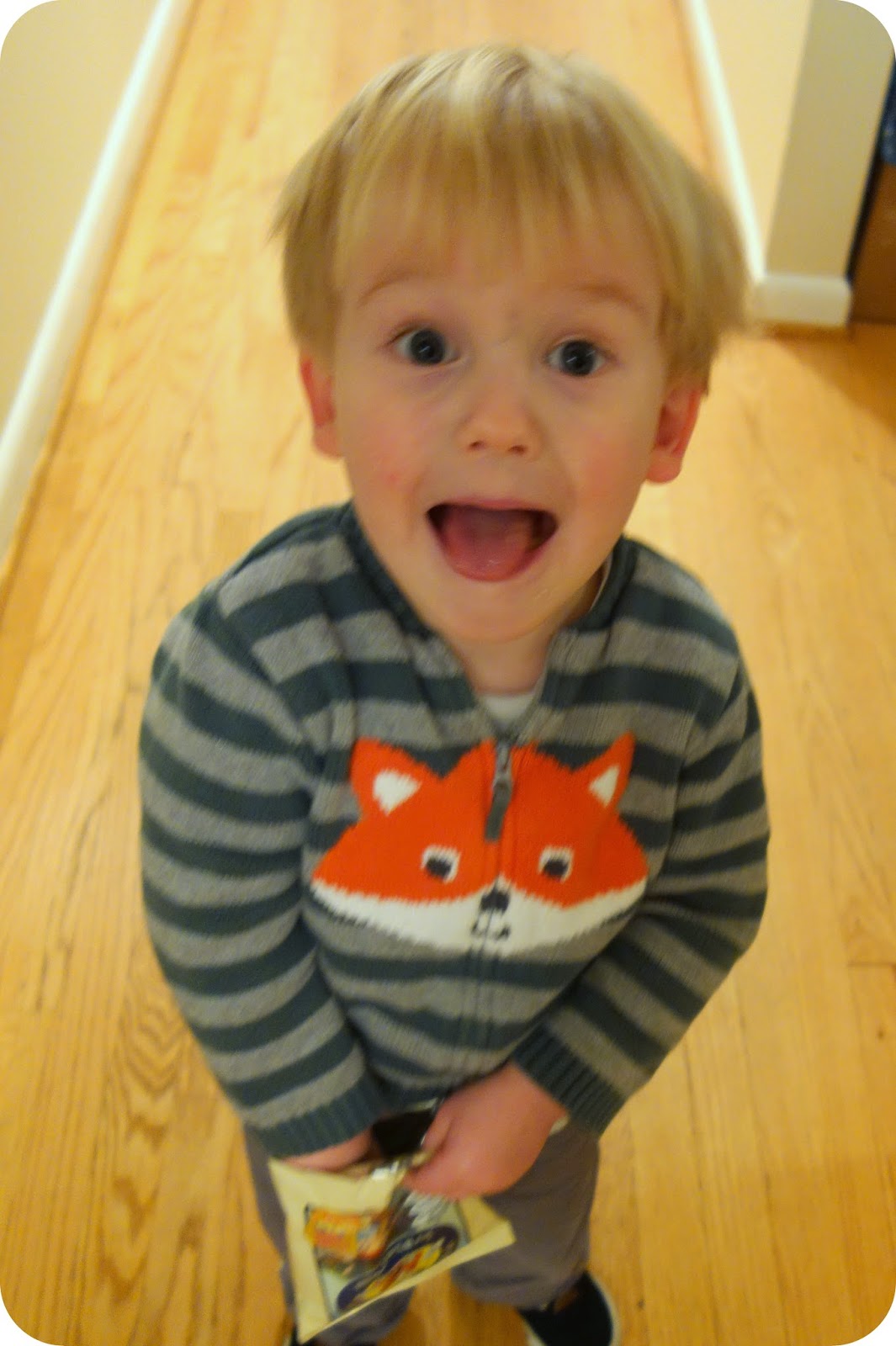 Anecdote of the Day:  Angus made some cute faces when I was taking photos of him that day.  Other than that, nada. 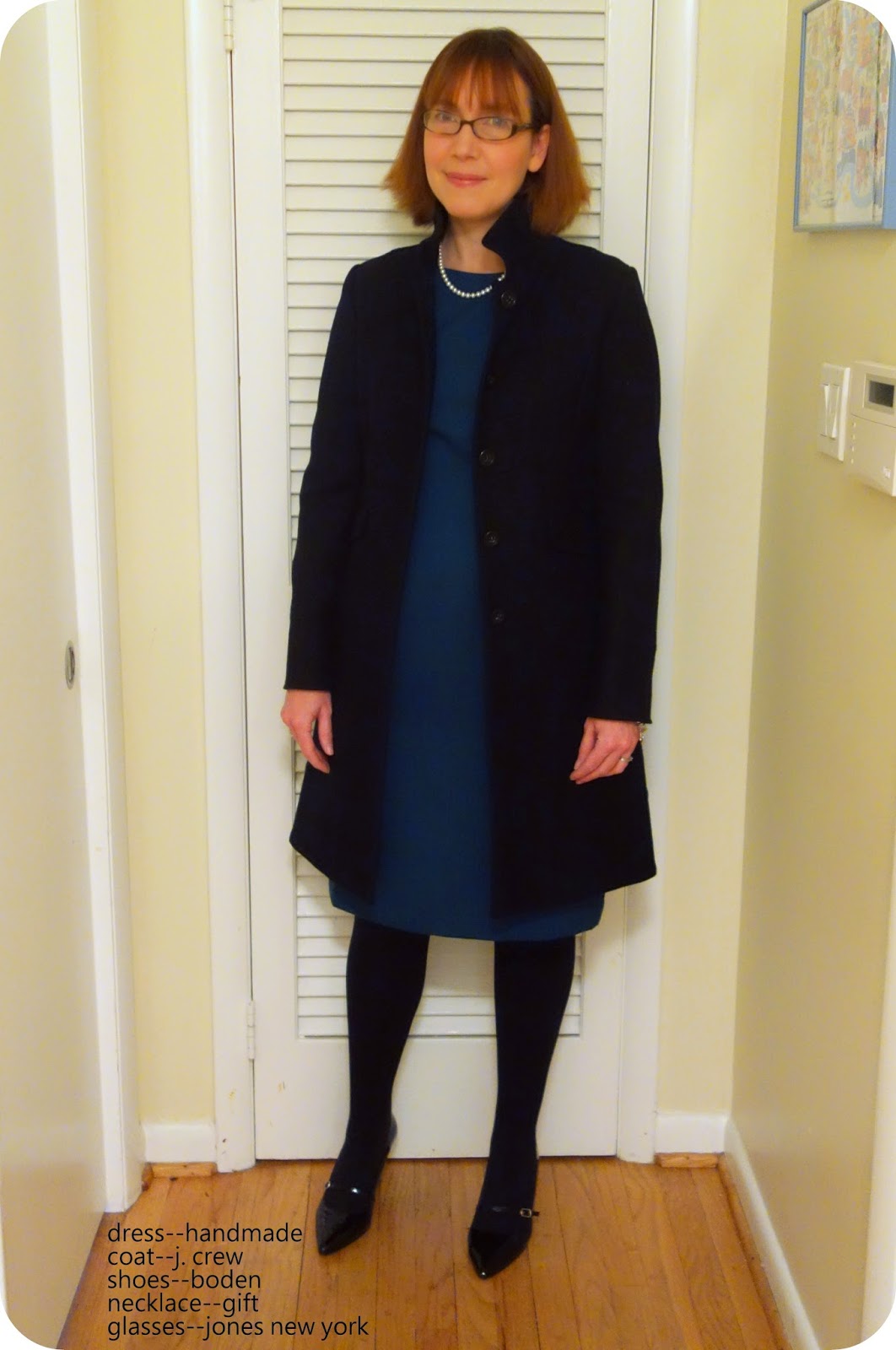 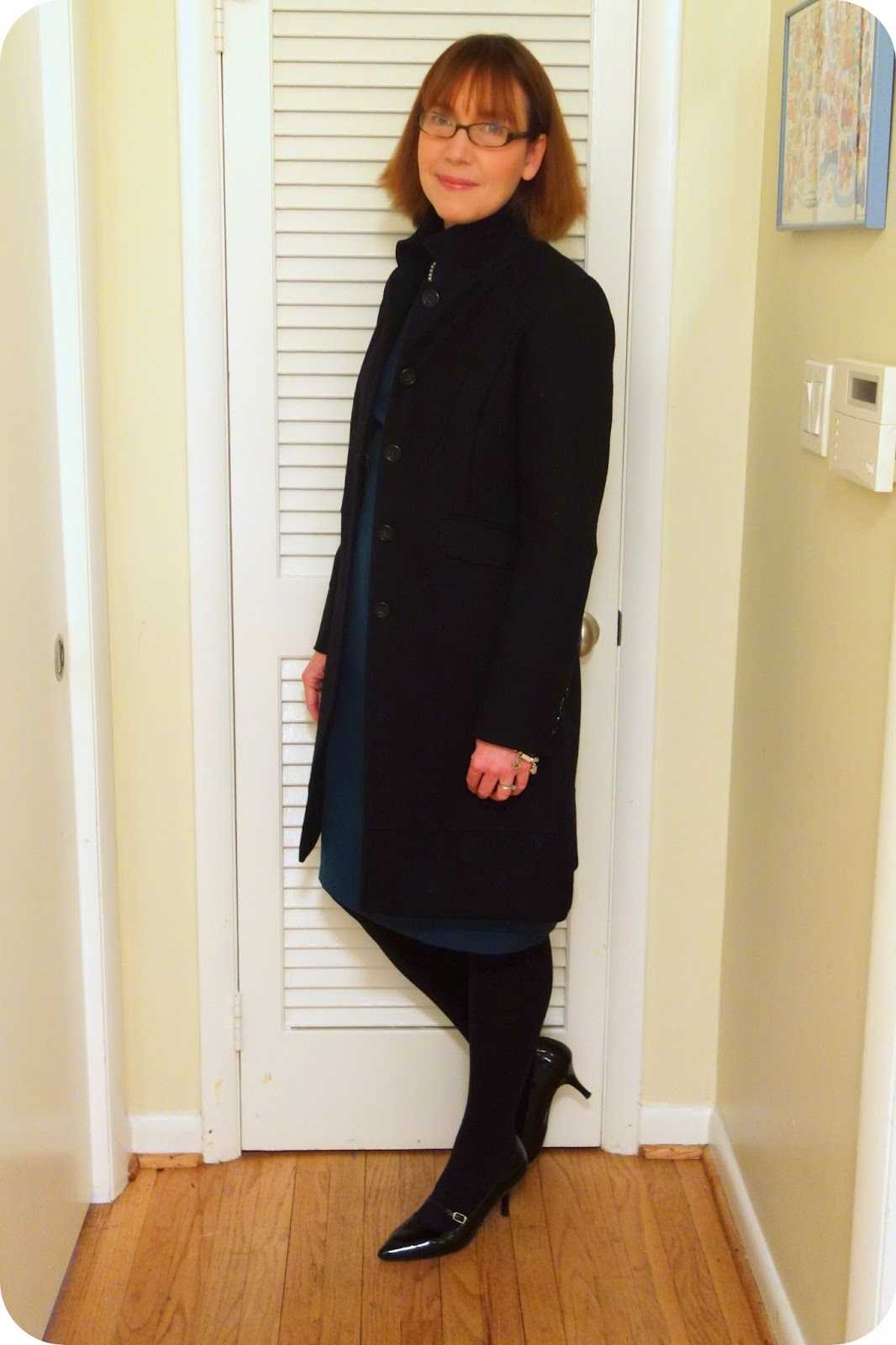 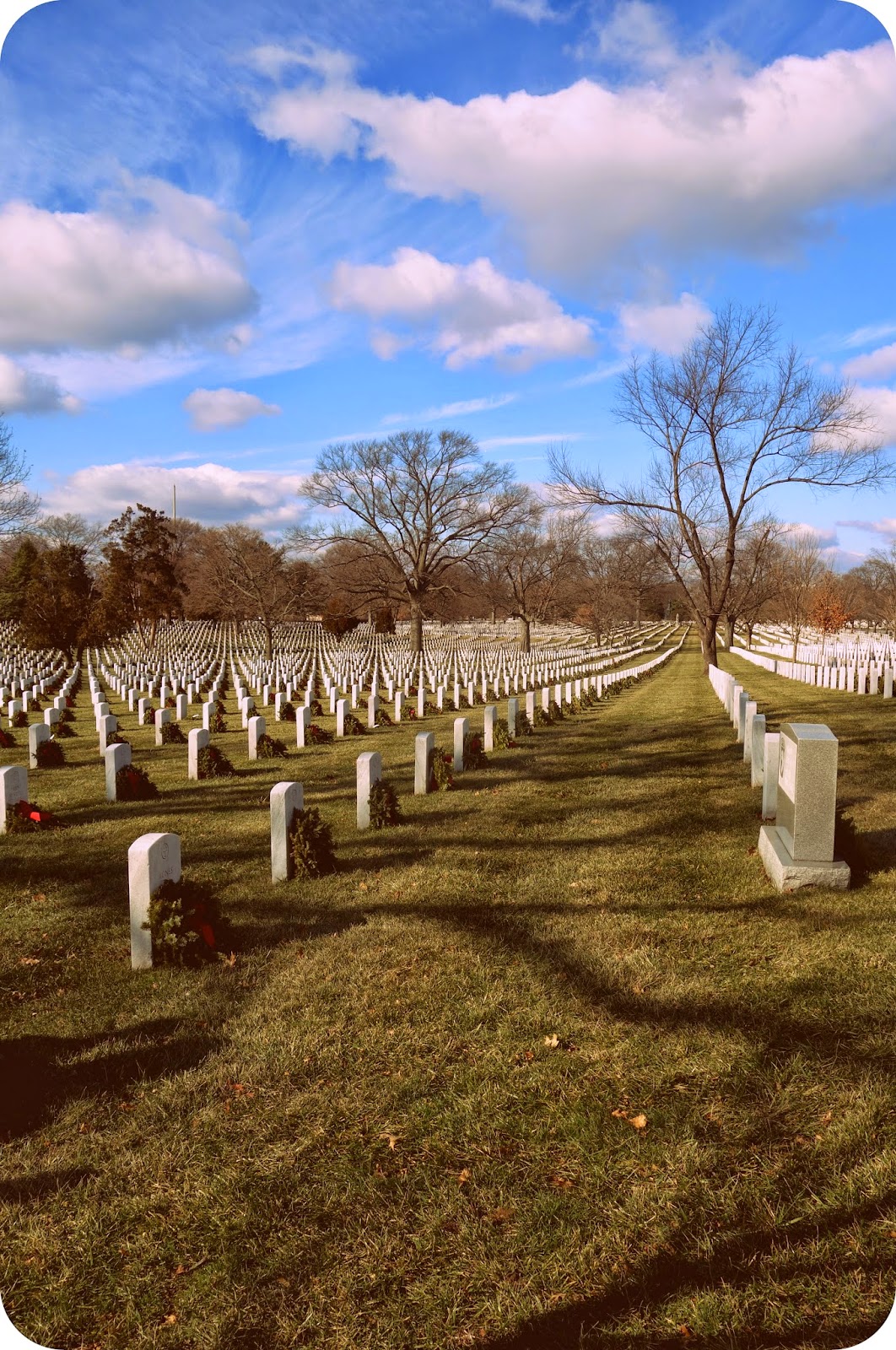 Where:  A friend's father's interment at Arlington National Cemetery.

Ease of Wear: (3.5 of 5 stars--5 being the most easy to wear.)  It wasn't about ease that day, since the occasion called for very formal.  I am glad I had proper funeral clothing, but with the very chilly day and windy weather, I have to admit that I was close to frostbite (especially on my feet) by the end of the ceremony.  But again, more than okay by me, we were honoring a man's service to his country on this day, my cold feet are nothing to complain about.

Cool Factor: (N/A of 5 stars--5 being the coolest.) Again, unimportant.  Not a concern of mine that day.  The look is very proper, very put together, and in sedate coloring.

Anecdote of the Day:  I cried at one point, even though I had never met my friend's dad.  The ceremony was so moving.  I felt honored to be there for her and was in awe of how reverent the military is in honoring their deceased veterans.  And the day, though bitterly cold, was incredibly beautiful, and from what my friend said, she knows that her dad would have been so pleased with both the weather and the ceremony.  :-) 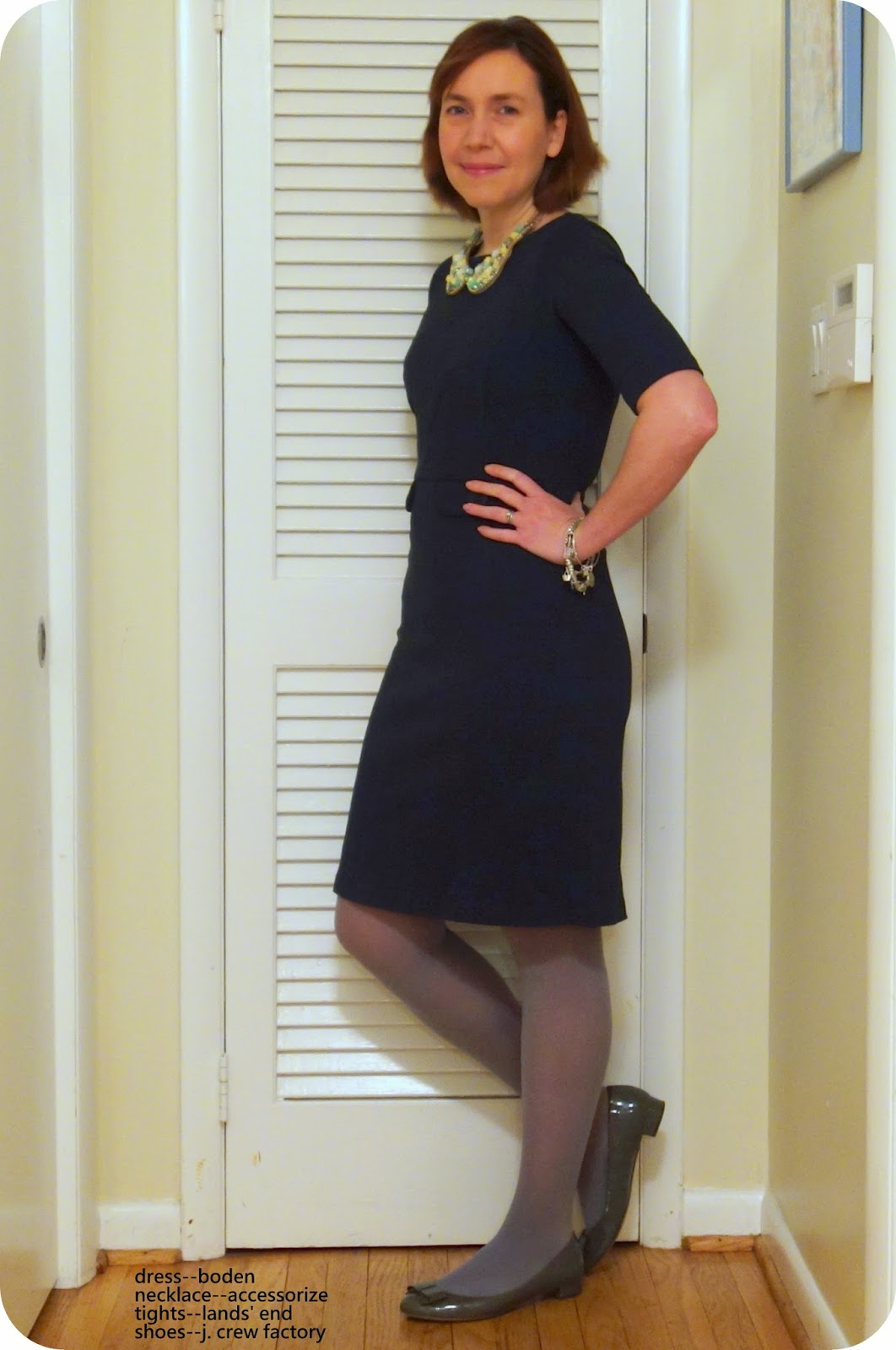 Ease of Wear: (4.5 of 5 stars--5 being the most easy to wear.)  Super comfortable, and the outfit kept me warm.  Let me give a shout out to the J. Crew Factory Harper Double Bow ballet flats.  These shoes fit well on first wearing and have been worn at least fifteen times since I purchased them in early January.  I bought the 9.5, which is my normal size.  They are great for folks who want something pretty but are also flat enough for those of us on our feet all day.

Cool Factor: (4 of 5 stars--5 being the coolest.) Exactly the right look for substitute teaching.

Anecdote of the Day:  Everyone loves that collar necklace from Accessorize that I bought when I went to Ireland two years ago.  I have a pattern for collars from Simplicity, so I bet I could figure out how to make the base from a firm fabric (like canvas) and bedazzle it with beads.  Hmm...

Okay, thanks for stopping by!  Hope my next post is sooner than later, as that means the suit sewing didn't do me in...
Posted by dinagideon at 12:59 PM