Made by Me File: The Burda Magazine and the Anthropologie Jacquard. 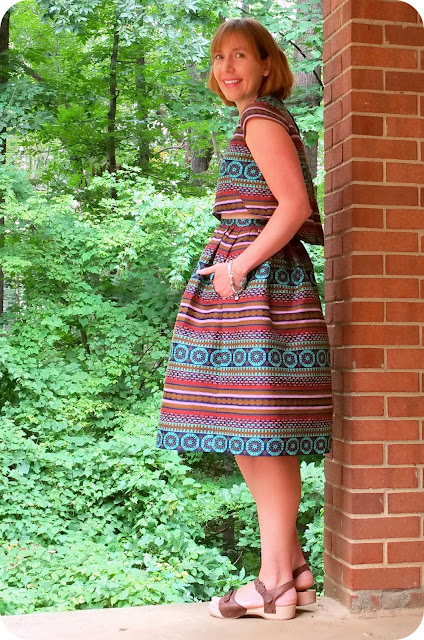 I know most of you who read this blog read it because you just love clothing, and more than likely most of you are fans of the same brands I am, Boden, J. Crew, J. Crew Factory, Zara, Madewell, and Anthropologie.

(I do know some of you are here for the sewing, too, but that bit of my audience is much wee-er, so I try to keep the "style" element in these sewing posts as much as I can.)

Anyhow, I know some of you eagle-eyed fans of Anthropologie will IMMEDIATELY be able to recognize that this crop top and full skirt combo is made from a jacquard fabric that Anthropologie used in its Iremel skirt, which is from November 2013.  I cannot believe my luck.  With the actual Lilly Pulitzer fabric for this make a few months ago to this one, I feel like I have scored fabric gold, and both times by total accident.  :-)

*You all are gonna laugh, but I discovered the skirt from Anthro by randomness, I was sitting around waiting for something, and I decided to paw through my old catalogs sitting nearby.  I opened up the November 2013 catalog and was all, "what the wha, is that the fabric?" I couldn't believe it! 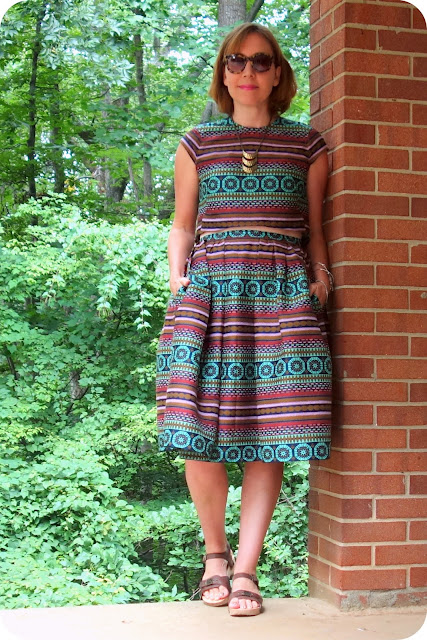 I figured that because Burda magazine does the best job in staying on trend while also having the best drafting, I would do well to choose two patterns from their magazines I have been holding onto, but not tracing.  (Tracing their patterns are a bit of a pain, to be honest, but worth it in the end.)

The crop top from their February 2015 (02 2015 #127) seemed to be a very good version of a crop top, and with some work, I could make it work on my more "mature" self.  (I lived as a teenager in the early 90s, and yes, I wore crop tops back then, lol, so I figure I should only repeat it in small and more modest doses.)  The full skirt from their October 2010 (10 2010 #117) seemed a good fit for my full skirt requirement, but even though I thought I would be able to just sew it up as the pattern is, I realized fairly quickly that this fabric and that pattern wouldn't work as is, so I had to make some changes there, too.  Oh, well, I am not one to step back from small defeats, so I figured all of it out, with only a tiny bit of cursing. 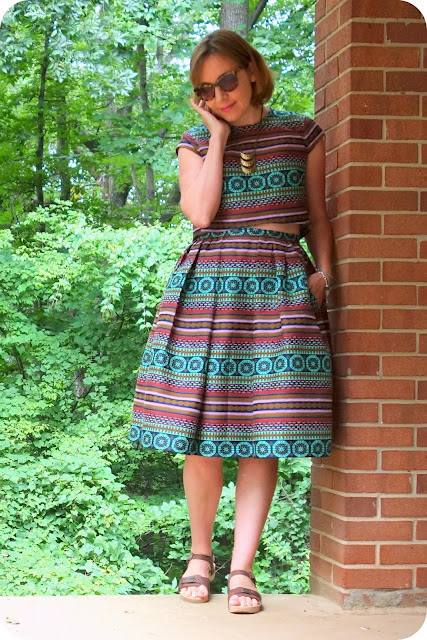 When I showed my husband the nearly finished project, but before I had ironed the fabric in the skirt into submission, he was all, "why in the world would you want a skirt that big?"  He didn't have a word to say about the top, so apparently a bit of tummy skin is okay in his book.  Ha.

The top is a bit longer than the pattern called for in the initial draft.  I chose to lengthen it, not because it was a petite pattern and it was too short, but because I needed the extra bit of length if I had any hope in wearing it out more than for this set of photos.  In my life, too much skin is too much, and I can't get away with it.  I am petite from shoulder to my upper hip (I measure the same as someone who is around 5'3.5" there, even though I am 5'8" tall), so technically the proportions of the pattern are perfect on me.  I didn't make my adjustment on the pattern from anywhere but the hem since I love having a top where the shoulder seam to the bustline is the right length.  That normally never happens, and I usually get a weird bit of bunching there because it is too long.  I also love that the bust dart was pointing at my bust instead of somewhere else.  So the only way I could lengthen this pattern was to add at the hem so I could keep the integrity of the petite sizing as original as possible.  It did the trick and I was happy to see that it gave me a crop that was showing a bit of the belly without being too risky for my lifestyle. 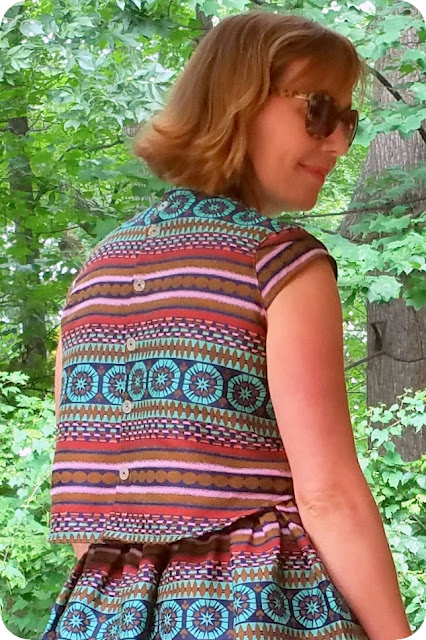 I also chose to close up the back with a button closure instead of just having it hang open with a single closure at the top of the back.  Again, I want to wear this more than just once!  I drafted a facing that was incorporated into the pattern, so I just had to fold it over at the drafted fold line, press and sew in my buttonholes and buttons.  Because this fabric is so thick and tightly woven, I didn't even need any interfacing at the buttonholes, they sewed in very nicely and look quite well done (I am not usually so successful with buttonholes).

I would say I spent the most of my time focused on the pattern layout on the fabric in order to get the lines/medallions to line up properly.  You can't take a bold striped jacquard like this and half finish the job...it would be very obvious that the lines are off and all the time and effort to sew up this pretty fabric would be somewhat in vain, since even non-seamstress eyes can see when tailoring is done shoddily.  So I would say 25% of my sewing time on this project was even before any of the sewing actually got started! 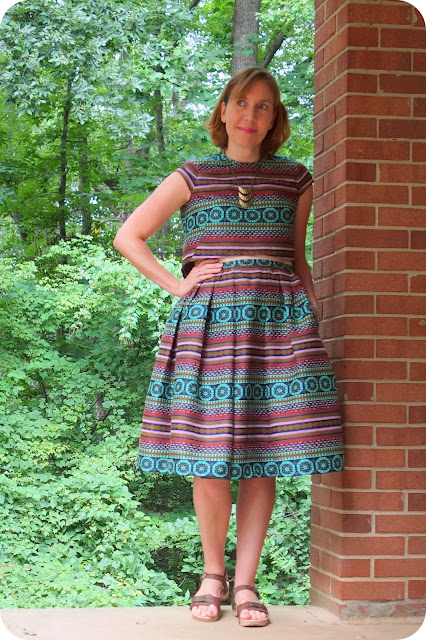 The skirt, as drafted, had so much fabric used that I would have had to use four full yards of fabric to get this skirt made.  Come on!  That's Civil War era skirt sized.  The jacquard would have been too stiff and heavy to do that, and since I am not looking to create a look for a runway, I knew I would have to take those proportions down a notch (although in a lightweight cotton voile that much fabric and drape would look super pretty).  I took out something like fourteen full inches from this skirt's pattern (I just folded over my traced pattern paper) to still end up with a very large, very full, deeply pleated and gathered skirt.  I definitely made the right call to do that!

Amazingly enough, even with all that fabric, it isn't that heavy.  It was a bit of a bear to sew up, especially when hemming (more awkward, but still).  I am pleased, though, that it is as flowy as it looks in the photo.

The pockets are fab.  They sit precisely at the right place and fit a cellphone, no problem.  And because the skirt is so full, you wouldn't know the pocket holds a cellphone! 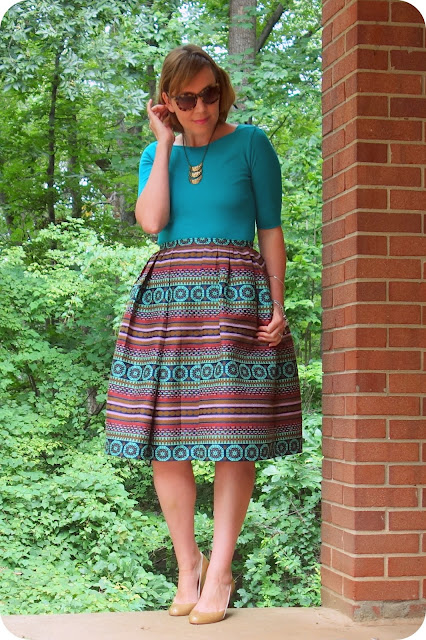 As much as I dig the crop top and full skirt look, especially since it is a bit different from my usual "look," I have to say the pieces separately work nicely with other pieces in my closet, like above with my J. Crew tee, Nine West wedges, and Target necklace.  This is actually a look I could wear to go to church or teach in, so that's a bit thrilling.  I don't think I can get away with the top at either place I just mentioned, but with a cami and a high-waisted pair of trousers, it would look pretty darling at a playdate or dinner out with friends.

Okay, that's it for now.

I wrote a ton about the sewing and the history of crop tops/full skirts in fashion here at this Fabric Mart blog post.

I also wrote up a review of the construction of the crop top here at Pattern Review.

Thanks for coming by and looking at my latest make!
Posted by dinagideon at 9:18 PM