A Few Outfits for a Vacation (aka Let's Go to the OBX)!!!

I realized I had not gotten my outfits up from my trip to the Outer Banks (which I took all the way back in early September). Since we are going away fairly soon to another beach-y location, I knew that I just had to publish. the. pictures. already.

Untitled by dinagideon featuring J Crew
Here is the polyvore of the outfits I wore (except outfit #1, which is directly below). 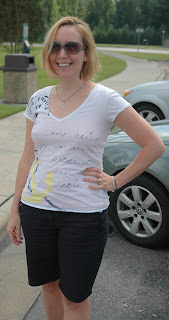 I wore this on the way to the beach. It was actually kind of cold (mid-60s), so I wore a light jacket (see next photo), but this is what I wore under the coat. The top is a tee from J. Crew from maybe two or three summers ago? I love this tee, it is so soft and pretty. The V-neck is a nice neckline, and I adore the anchor detail. The shorts are the ubiquitous summerweight stretch bermudas that you all know now that I own in almost every color. (These are the navy pair.) The sunglasses are from Boden, and from this summer. I ADORE these glasses! 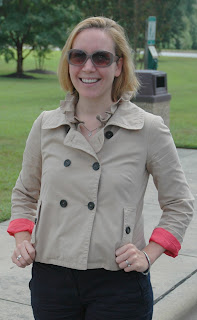 The light jacket I wore is the Ruffle-neck short trench coat that J. Crew made this last spring (2009). I remember Slastena loving it, so I bought it, and I loved it, but it is definitely too heavy for me to wear in the summer...but 60s? Yes, I will definitely pull it out again...plus, look at the tea rose contrast color in the sleeves!!! Too freaking adorable. Love it!

This is from Target (and is in my polyvore). This giraffe-print is so sweet. It is a Merona Collection item, but lucky me...I found it on sale. YAY! (And in my size...even better!) This may be my favorite dress from the weekend. It fit perfectly and the giraffe print was not especially overwhelming (the way animal prints can often be)...I saw this dress on sweet tea in seattle and fell in LOVE, so thank you! :)

I wore it belted with the skinny leather belt in hot pink, which is from J. Crew this last spring. The shoes are some knock-off gold capri sandals from Target from a year or so ago (I think they were ten dollars--definitely a steal).

Oh, the giraffe print obsession continues. This time, for the next day, (the day I visited the crewlet), I wore the giraffe-print belted top by Merona Collection (also on sale) and a pair of aqua shorts (also on super-sale...something like 5 dollars). I wore the fake capri flip-flops again, natch.

I wore this delightful dress to dinner the last night we were there. Dinner itself was a nightmare (thanks, Rex), but I still felt good and eventually even Rex was well-behaved enough for us to enjoy ourselves at least a tiny bit.

This is the linen constellation strapless dress from J. Crew this last spring 2009. I tried it on in a ten initially, and decided it was too big, so I went back to J. Crew later (and armed with the Mickey card) and bought it in an 8 and for 25% off. That works for me. But here is the kind of sad thing...I just got around to wearing it (some five months later) and I find the 8 fit, but a 6 would have been better. Here is my advice to all you post-partum moms out there...if you buy it while you are still losing baby weight, be prepared to do some tailoring or else you will have wasted your money. I got by with it being a bit too big by doing the old tug, tug, tug. Sigh. (And I must say, I didn't have to tug this one nearly as much as the Sanur dress...that dress is really hard to keep up...)

And here is the dress with the linen seafront cardigan (I think that is its name). I love this cardigan. I am obviously a huge fan of the linen (what with it being all southern preppy summer friendly) but I especially love linen sweaters...they are so unique and the texture so special, that I usually buy one or two linen sweaters a summer. I believe gigiofca also wore this one for you all at some point.

I will be publishing my pretty pics from this trip (which will include some of the kids that are super-cute) later tonight. You all have a great day, I am off to comment on the other posts (hopefully) and to go sub...
Posted by dinagideon at 9:03 AM

Love the outfits. Hope we get a full recap of dinner with Rex, hehehe. Constellation dress is fab on you! Love the giraffe dress, too!! (I tired it on in orange, but fit was just ok). What a fun weekend!!

wow, those were some very pretty vacation outfits! I love the constillation dress on you. Did you get it tailored to a 6 now?

I second Heidi - I'd love to hear the recap of Rex at dinner.

Love that Constellation dress on you with the belt! Great styling!!!

You look super cute in all of your vacation outfits Dina! :)

The constellation dress looks fabulous!
I am also intrigued by the whole dinner with Rex story.

of course you looked gorgeous in every last one of your outfits, but there's a special place in my heart for the first tee you're wearing from jcrew. I LOVE IT!!!!!

very cute outfits!- i have the giraffe dress also, and LOVE it- I only wore til twice, and then fall happened :(

You make the constellation dress shine! I'm glad dinner out went so well (sarcasm.) Life with toddlers is a constant upheaval, at least you look happy and well turned-out dealing with it!

Hi, guys! Thanks for your patience, I am FINALLY energetic enough to comment back. Well, I say energetic, but I am not 100% so I am only going to do my whole "comment to the group and answer individual questions, etc."

I am glad you guys enjoyed seeing my retrospective of NC beach wear. :) I will tell you the story of Rex at that dinner soon...it was terrible. But then, amazingly enough, it wasn't. Two-year olds are like that, I suppose!!!

Jemma Ruby: I haven't gotten it tailored yet, but since I anticipate the nursing of CW will cease soon, I will most likely have to take it in by next summer, which is JUST fine by me! ;)

Pamela: I can't take full credit for the belt thing...the Personal Shopper over at Pentagon City did that for me and I think it looked so good that I fell for it hook, line, and sinker. :)

Patina: Girl, how many clothing items do we have in common? Great minds and all, huh??? ;)