First things first...I finally joined the 21st century and made a Facebook page for My Superfluities.  I would adore it if some of you decided that you wanted to "like" that page.  :)  My plan is to do preview outfits that will eventually appear on the blog (I get so behind, this would be a great way to show off each outfit as I wear it) and to tell folks when Boden has sales and I have received news and/or coupons that I can share with you here.  There will likely be more, but since it is in its infancy, that is the plan for now.

So you all have seen the Pleated Blouson Dress in action already when I wrote about my experience wearing it on my birthday weekend (also known as the weekend when derecho Dina hit the east coast).  I only gave the dress a passing review, with one photo, as I was beyond tired from all the festivity and craziness of the unplanned sojourn from electricity...

I have worn the dress twice now (ooto--outfits of the "occasions"), the first time being when I wore it for the birthday/Baptism (which was mentioned in that post I linked to in the paragraph above), and the second time for a wedding of some close family friends (the groom was a boy I used to nanny for--agh--I AM SO OLD). 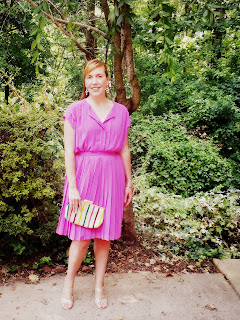 This is the way I wore it for the wedding.  I felt like I could loosen it up a bit since I wasn't going to be at a church (the groom is a Unitarian and decided to have it outside, my wedding had to be at a Catholic Church)...it felt good to totally change up the look from conservative to a bit more flashy.

Dress: J. Crew Pleated Blouson, Size 6 (fit for my waist, hips/bust free-ish).
Shoes: Via Spiga Mystique, Size 9.5.  These are seriously sexy shoes.  I don't own a lot of sexy shoes.  I bought them on a whim when I saw them at DSW for a ridiculously good price (one of the clearance items plus 40% off).
Bag: J. Crew Candy Stripe Jute Clutch.
Earrings: J. Crew.

I went with no belt this time as I felt like the dress could do well on its own.  I was right.  I far prefer this styling to my original styling. 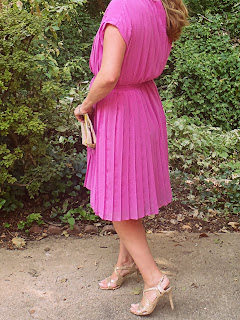 I kind of like this photo, plus it gives you good look at those amazing shoes.  I kind of feel like these shoes belong in the Eagles song, Those Shoes (that link has the song and some silly dragon avatar--huh?). 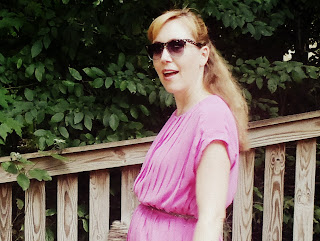 This was from the first outing.  Mr. Dina caught this angle, and I ended up liking the image.  You can see the belt here.  I really don't mind the belt, but prefer the styling as worn to the wedding. 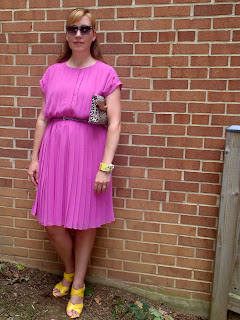 Original styling.  It is fun, it is colorful, and it is "current," but I definitely won't be replicating it.  I am having issues with those yellow Lena wedges, too.  I have now worn them three times and while I love them on their own, I have not liked them with the skirts and dresses I have paired with them.  (I think I may need to wear them with shorts and capri pants instead.)


Onto photos from the occasions that the dress was worn to:

The polyvore of my preferred styling for this dress is above.

Alrighty, then, we'll talk soon.  Hope you all have a great night, and maybe I'll see you over at Facebook.  :)
Posted by dinagideon at 10:35 PM