Before I start the post, I wanted to congratulate Julie, she won the NOVICA $50 giveaway. Random.org gave me the result of #18 of 20 entries, and that was Julie's comment.  I will email Julie with more information.  Very excited Julie gets to enjoy some NOVICA shopping.  :-) 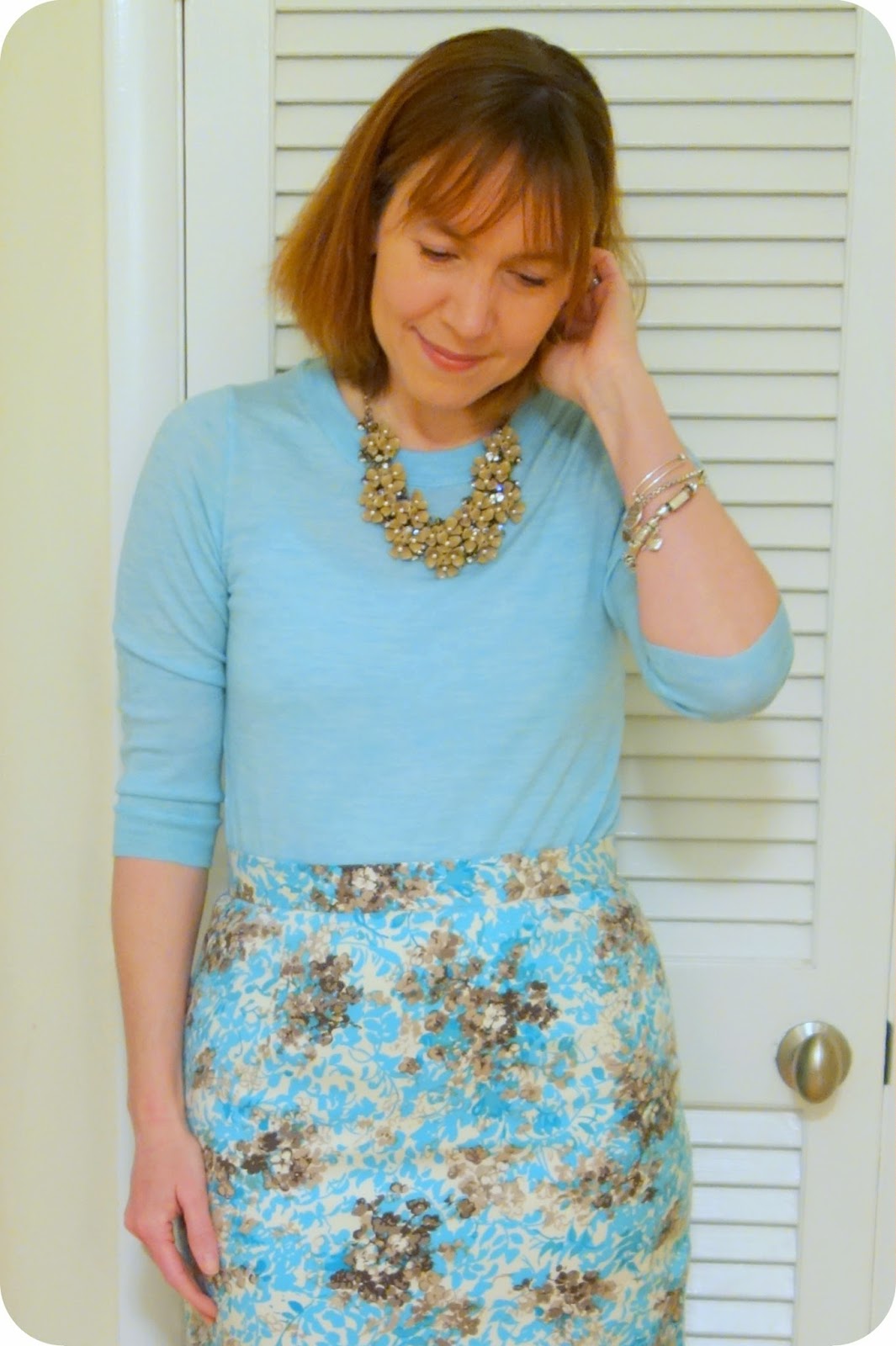 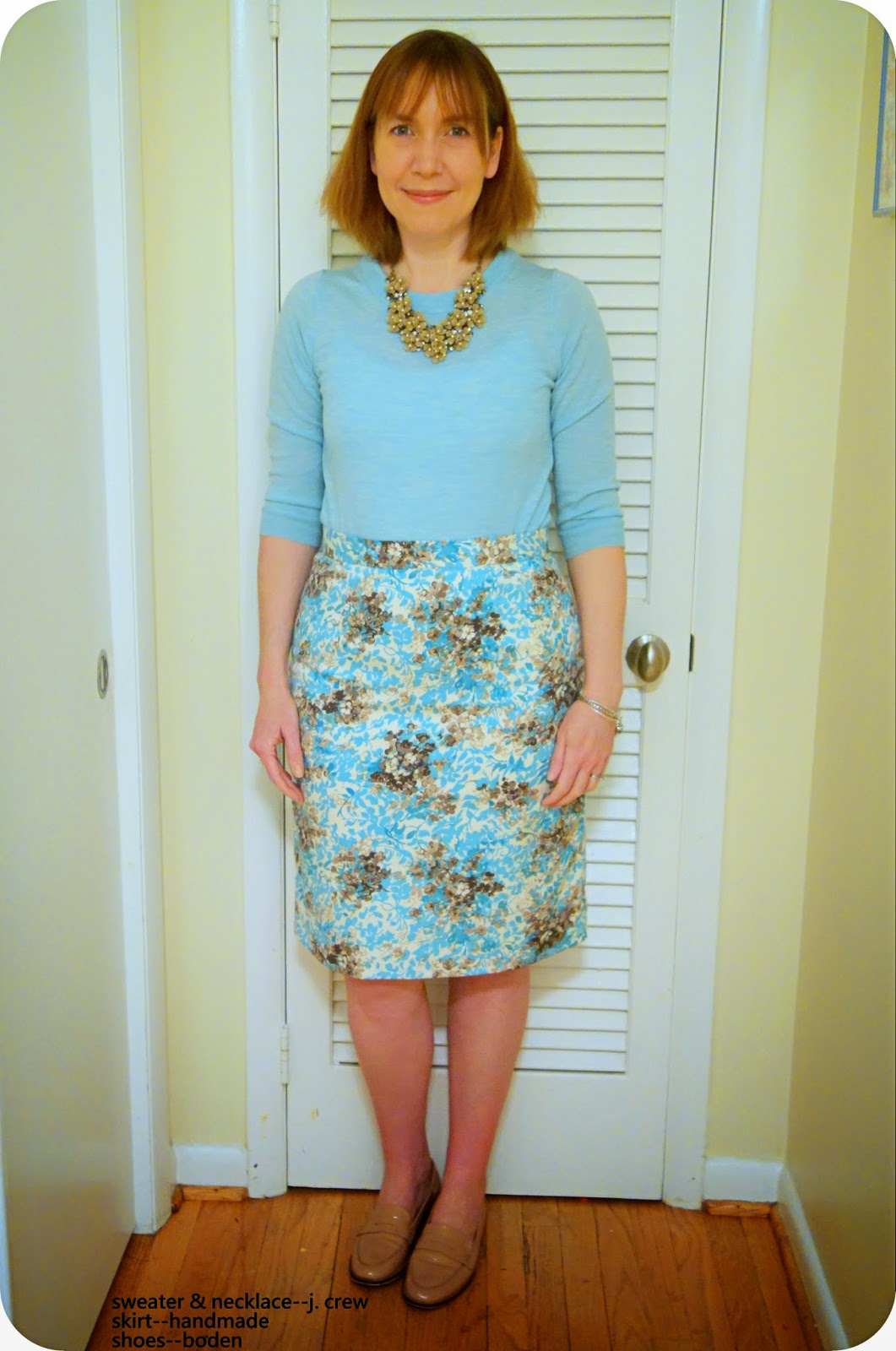 Where:  Substituting for the upper grade's Spanish teacher.

Ease of Wear: (4.25 of 5 stars--5 being the most easy to wear.)  Skirt was made by me back when (here is the original post on its construction), and I have lost a couple of pounds since then, so it fits very well now and is very comfortable.  The Tippi sweater from J. Crew is also amazing, I know there are lots of women who are fans (and own multiple colors) but I haven't really dipped into the Tippi pool, outside of a handful of versions from years past.  I am a fan, but I don't actively seek out having multiples of it.

The only ding came from the loafers, which fit fine, but after standing all day in class and then walking to Harris Teeter on my break (in warmish weather), I found they felt really small and were rubbing against my feet uncomfortably.  So I went ahead and purchased those "half-socks" from the grocery store and that helped a bunch.

Outfit Details:  When I made this skirt, I was thinking I would have no problem matching tops to it, but I was surprised by how hard it was.  I either just don't buy these shades and can't get things to work with it, or the print has a very specific look and needs something especially unfussy for it to work with it.  I had tried regular white tee-shirts and blouses, but it was too plain, however anything with any amount of print or sequins or embellishments was too much.  The top I wore with it originally is fine, but I want to sell that one as I don't really love it.  I did not purchase the Tippi with the intent of matching the skirt (I just really loved the color), but found that it was exactly the right shade for my skirt.

Long story short, lol, is that you can find the Tippi here at J. Crew (this is the heather aqua shade).

Anecdote of the Day:  The big burly cashier at Harris Teeter really liked the old school J. Crew necklace and said it perfectly matched the skirt.  LOL.  I love it when people you don't expect to be into style are into it.  :-) 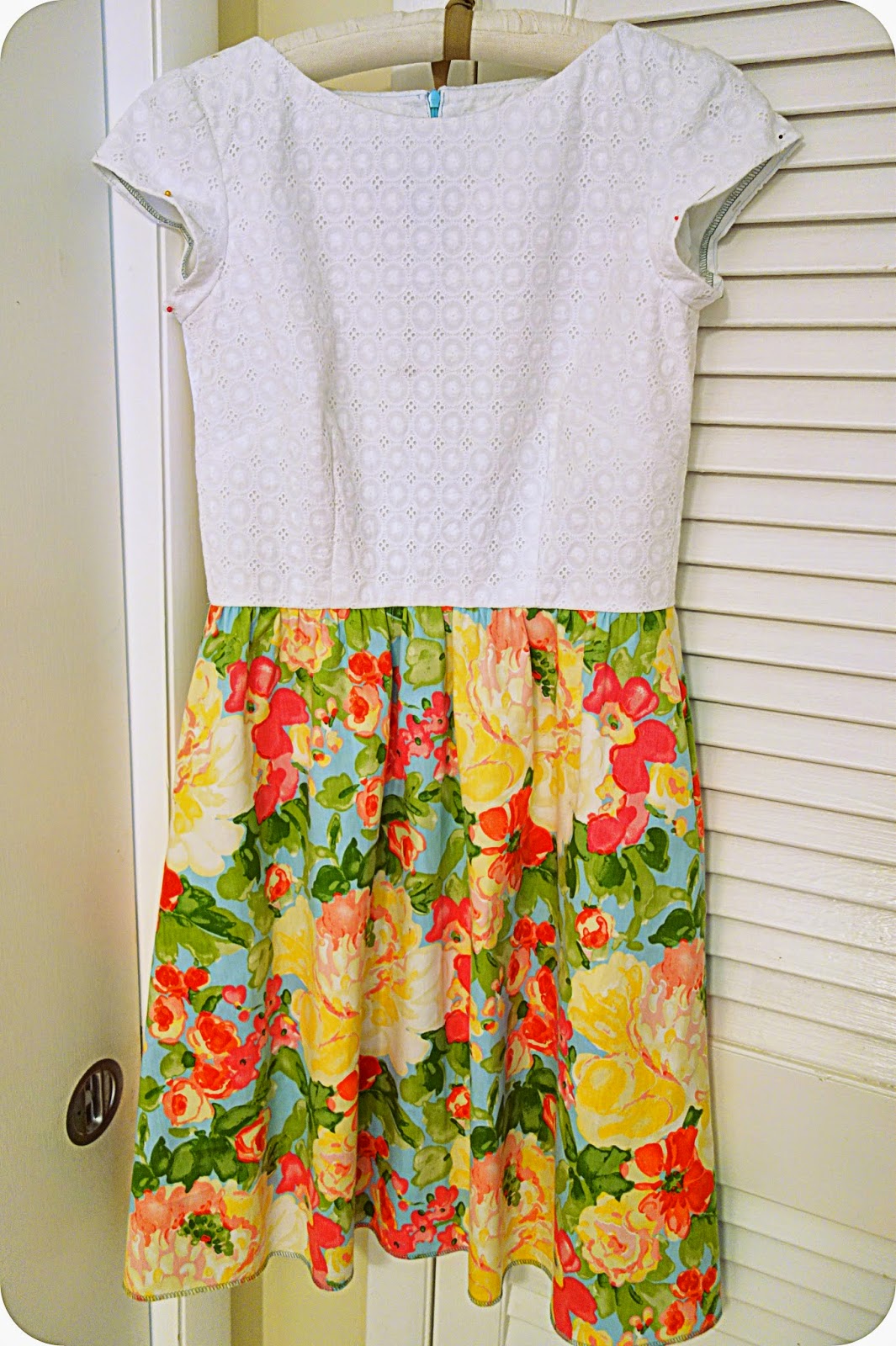 I am not 100% ready to reveal the dress on me yet, as I still have hemming of the skirt and sleeves to do, but I know that a lot of you are both fans of sewing and of Boden, so I kind of figured you would be into seeing my latest project, which is my Easter dress.  It is New Look 6262 and is supposed to be a close approximation of Boden's Rosalyn dress.  I had originally ordered the Rosalyn dress, but after the huge mess of the preorder and my card company having problems with the double charges showing up, I decided to cancel my order and just make the darn thing instead.

The floral fabric (called Waverly Blossom Boutique Twill Aurora) is actually a home decor fabric, but it is lightweight enough to work with this pattern.  I have to admit to preferring this floral pattern to the one Boden used.  And based upon the fact that I know the Boden version's bodice would have likely been too long for my short torso, I was glad to have creative control and a tape measure in my hands to ensure my version wasn't too long.  I also decided to add a back invisible zip instead of a side zip, so I won that way, too.

It's not that I don't love the Rosalyn version, in fact, seeing it on AudreyBella made me realize it is a very beautiful garment, but knowing I could make my own gave me fuel to just get it done.  I also had enough fabric left over to make my daughter a version, and so far so good.  Wish me luck on getting that one done in time.

If you would like to see the nearly finished version above on me, I gave the Instagram folks a sneak peek last night. 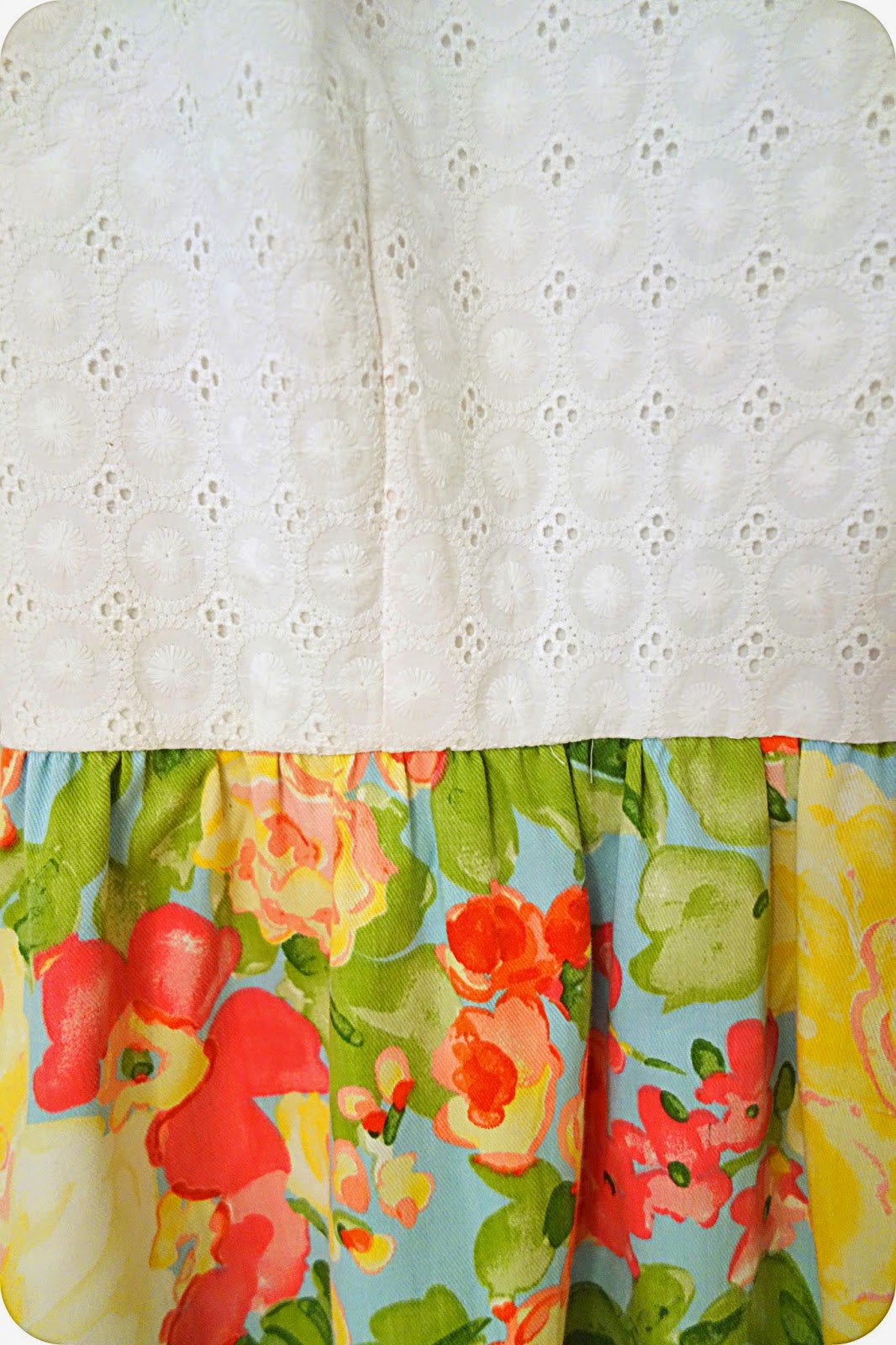 Here is a close-up of the fabrics.  The eyelet broderie fabric is from Fabric Mart last year and is definitely not around anymore.

Real quickly, before I go, Boden has upped their mid-season sale to 50% off on some items

, including a lot of the ones I have reviewed (Rainbow Knit sweater, French Knot sweater, etc.), so go on over to this post to learn more about the sale.  (The post says "up to 40%," but it was written earlier this week.)
Posted by dinagideon at 3:56 PM