We are a split decision family here in our house, but only during any Nats vs. Orioles games.  (When they play each other it is called the Battle of the Beltways, although we could call it Momma against everyone else.)

So why would I, a native of Northern Virginia be adamant in rooting for the Orioles over the Nationals, when the Nationals are our "home" team?

Well, if you know anything about baseball, DC did not have a team for many years between the 70s and the early 00s.  We had a football team, a basketball team, and even a hockey team, yet no baseball.

We had exactly one team we could root for and they were not so conveniently located an hour north in Baltimore (well it was an hour in 1997, the last time we went to B'more--for this Rush concert--it took us 2.5 hours to get there).  It didn't matter...if you were a fan of the boys of summer (fave Don Henley song, btw), you needed to head up 95/295 to see them playing in Charm City.  My fave boy of summer was always BJ Surhoff (showing my age there, lol).

One day my hubby came home and announced that Montreal was losing their team and they were coming to DC.  I was stoked but also a bit bewildered.  Would I forget my team?  Would I not root for them any longer?

Well, in most cases, yes, I do root for the new home team of the Nationals, but like most folks who grew up between Richmond and Baltimore in the 70s, 80s and 90s, when the Os play the Nats, the Os win out purely because of nostalgia.

They play each other a few times a year and I always pull out my Os hat and don some bright orange to let the world know my allegiance.  My hubby tolerates it, but only because I let him dress the kids up in Nationals gear.  (He did not grow up here.  Which I have no problem reminding him when he gets lost on his way anywhere in this area without me--the streets here are "challenging" to put it mildly.)

We were stopped a lot by folks, mainly other Os fans giving me a thumbs up and asking why the baby on my chest had a Nats cap on...it was fun, and it was nice to have a heated "frivolous" rivalry in the house.

My beloved Orioles?  They lost.  Sigh.  (Yeah, Mr. Dina, Rex, CW, and even darling Angus totally rubbed it in my face.)

I was not super heartbroken, though, had it been any other team going against the Nats I would have been cheerful at the win. 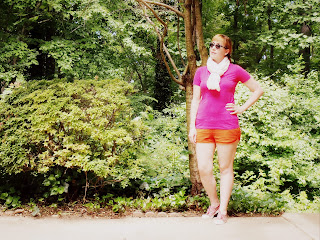 I was inspired to wear this outfit not only because the shorts are the exact right shade of orange, but also because Madewell sent out an e-mail with items from the beach shack a while ago that paired these shorts with a hot pink top.  I so loved the look that I immediately purchased the shorts along with a bright pink v-neck that was on sale (the one in the e-mail was too pricey).

I plan to show off that image in my inspired by Madewell post that is upcoming, but until then, I will give you all a sneak peek at the bottom of this post. 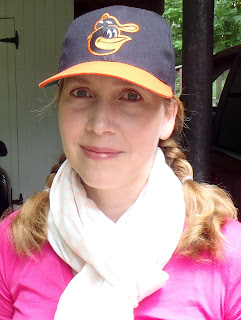 My hubby really likes me in braided pigtails.  I sort of thought he would outgrow that, you know seeing as I am no longer 18, but every time I wear them, he says, "I love you in pigtails."  Whatever.  :)

The wacky bird is the best mascot, btw.  It is rare to see actual orioles in these parts, so if I ever saw one in real life, I would probably be surprised that it isn't a big fat black bird with a grinning orange beak.  :) 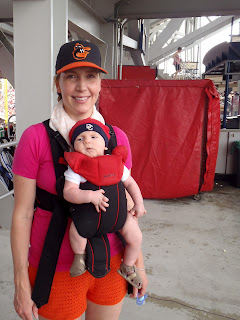 This was Angus's second game as a Nats fan, and because he faced outward, he definitely was a favorite of many of the people at the game.  I think my favorite part is his fisherman sandals, so cute! 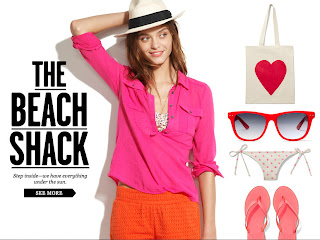 This was the image I was inspired by.  I also have the red sunglasses, again because it was less expensive than the ones I had been eyeing at J. Crew (a near $75 difference, btw!).

Do you have any family fun rivalries?  It could be anything...political, tv shows, etc.  Do tell!
Posted by dinagideon at 3:39 PM