Made by Me File: McCall's 6844...Heavy Wool Knit Sweater Jacket!

As promised, this is the first post of four that centers around my first big project for the Fabric Mart blog.  The original blog post is here at their site.

What makes these four posts here at my site different is that I will focus on the individual pieces a bit more here, and end with a post on packing with these three pieces as my base for the whole travel wardrobe for my trip to Mississippi in a couple of weeks.  The rest of the posts will be published over the next week. 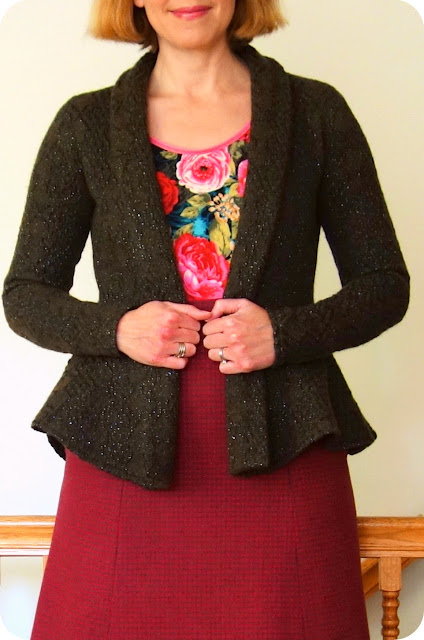 In 2013, McCall's issued the most amazing cardigan pattern, McCall's 6884, and I, along with every single sewer out there (including Mrs. C, who has made it five times?), purchased it.  Unlike every other sewer out there, I didn't get to my version right away since I am the world's slowest sewer (although my stepmom thinks that title should belong to her, lol).  In fact, though I pulled this one out multiple times over the past year, I never sewed it up until Julie over at Fabric Mart asked me what I wanted to do for my first blog post as an official contributor to their blog.

Because I am me, I had a gazillion ideas, one of which was to use this amazing heavy wool jacquard sweater knit (on sale today!) with view C of 6844.  I didn't know if the folks at Fabric Mart would go for it since it is a dear price for a couple of yards, but they said yes, and upon receiving it, I think I fondled it for about an hour.  It isn't that it is especially soft (though it is lovely to touch), it is that the sparkles from the silver threading combined with the heavily textured diamond jacquard pattern knitted throughout are stunning in real life (I hope you can get a sense of the texture in the above photo).  My stepmom was equally in love and was excited to see how it would look as a cardigan.

I do want to point out that if you are sensitive to wool, I would recommend lining this fabric, and since it is a lot like a felted wool woven, you should be able to do so easily.  If I needed to line it (I am not sensitive to wool, though), I would use something like this since it has a bit of stretch.

Well it turns out that because the fabric is so thick this cardigan is now probably closer to a sweater jacket because of the weight and heft of the fabric.  If you get cold in winter and like to have a wool knit that will keep you toasty, this is your fabric.

Here in Virginia, this is actually a jacket I can wear as outerwear in the fall and spring since there are always quite a few days where the temps will be in the low 50s, and this jacket is perfect for those conditions.  Otherwise this is a great dressy topper for chillier days when you need something to keep you warm inside. 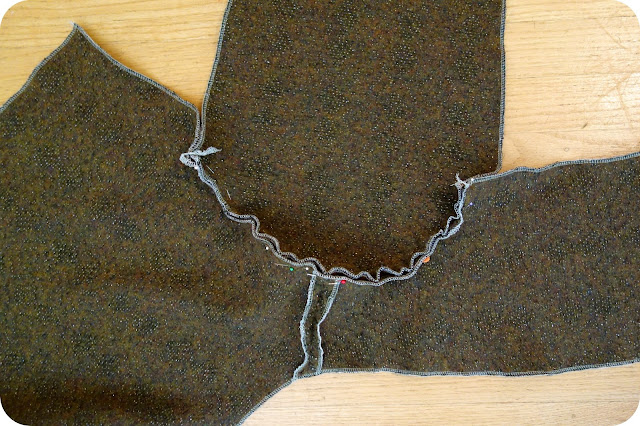 If you can believe this, I had never sewn a sleeve in flat on an adult garment.  Ever.  Children's garments, sure, but not for me.  I was all set (haha) to set in this sleeve, just like the instructions told me to do, but after reading a gazillion and a half reviews of this pattern, especially Detective Houndstooth's awesome review, I decided that this fabric, while not the stretchiest ever, had enough give in it to properly set the sleeve in flat.  Above is how I did it and it worked perfectly.  So unless you have some reason to not sew it in flat, go for it.  I would dare say this fabric is pushing the limits of this particular type of sewing, so I suspect 99.5% of you making this pattern could sew the sleeves in flat.

Detective Houndstooth best describes this procedure, so I definitely encourage a visit to that blog post she wrote. 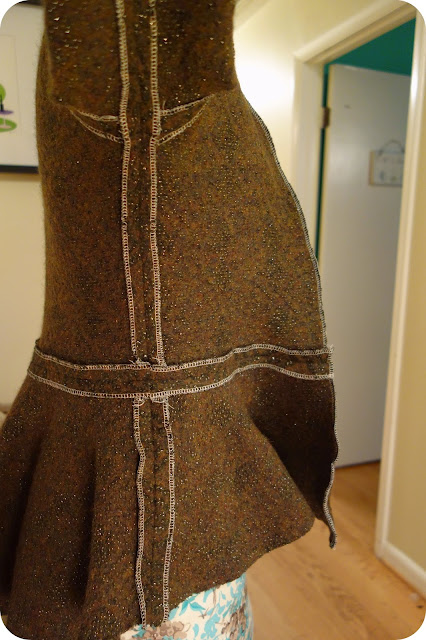 I know I didn't have to serge the raw edges of this fabric since it is a sweater knit, but this fabric is so special that I wanted to take the extra step to keep the edges tidy.  I didn't serge the hem raw edge, though, since the back peplum wrong side does show when wearing, and so far so good.  If the edge does start to unravel I will probably hand sew a edge finish (ugh...that's a lot of hand sewing!).

I want to point out that with a lot of steam from your iron, these seams were very easy to press.  I knew that I was going to keep the whole seam allowance intact, so I realized that fully pressed seams were the only way to go.  I used my tailor's ham for all of the seam pressing, and even at the armscye I got a very flat finish.  Success.  By properly pressing these down, I was able to control the bulk, and you can't tell from the outside that these were once very thick seams! 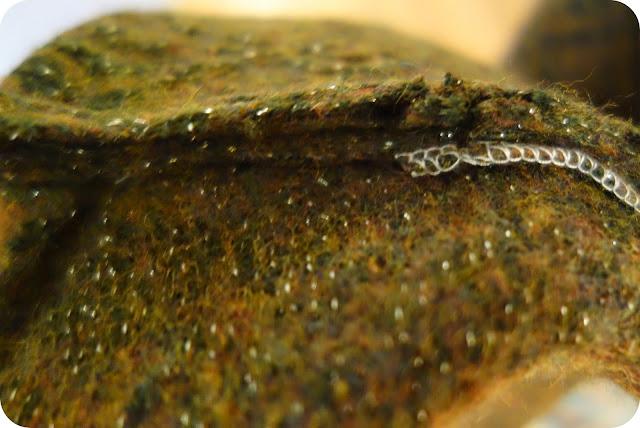 Speaking of bulky seams, in order to get what you see above (that is the join of the three fabrics where the collar attaches to the main body), I had to do quite a bit of trimming.

On the left side of the image you see the newly trimmed seam, where only the upper most seam was left full, the two below were trimmed to nearly an 1/8".  On the right side is the full thick seam as it was before the shears came after it.  ;-) 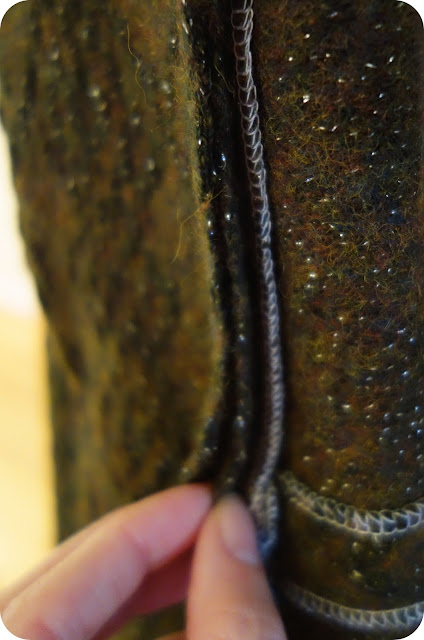 I first found the two lower seams and separated them from the upper layer. 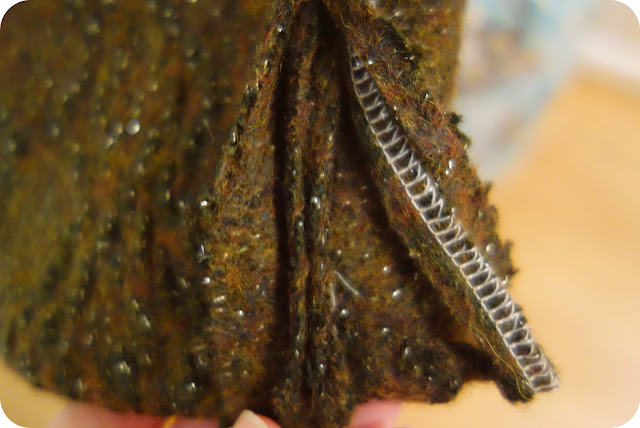 I then cut the two lower layers with the scissors VERY carefully, leaving the top seam intact (it gets folded over the seams under it and is topstitched from the right side, which enclosed the lower seams under the upper seam).  Gosh, I hope that makes sense. 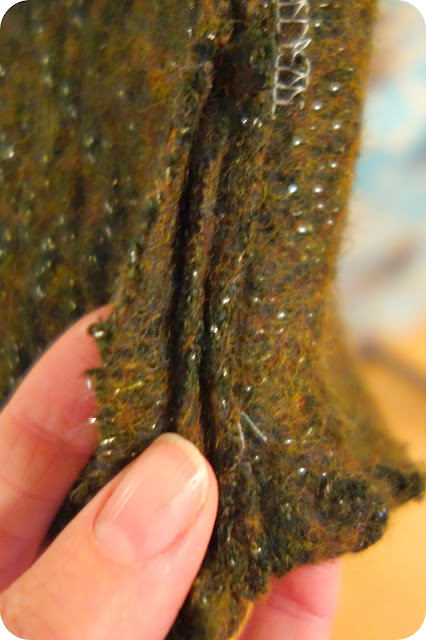 All cut away.  I would say the trimming took me a good ten minutes, and after that pinning the allowances so the upper layer encloses those newly trimmed under layers so it could be topstitched from the right side took another thirty.  Worth ALL the effort.  The topstitching looks great and the seams lay flat.  I didn't serge this seam, either.  Again, if it starts to unravel, I will hand sew a finish.  I really hope that its current state stays, since that is a lot of hand sewing.  ;-) 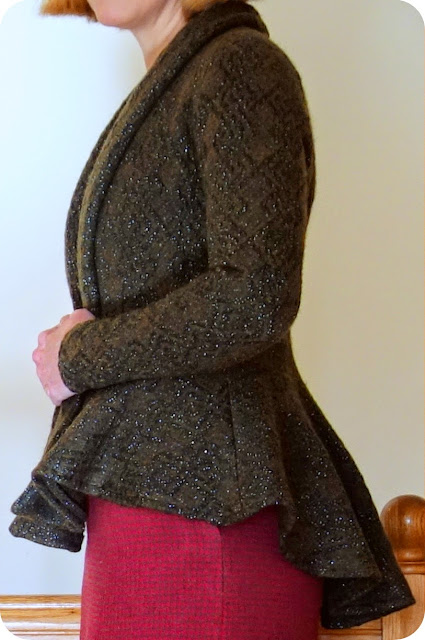 This pattern's view C is very extravagant.  That peplum flounce is not for the shy, especially in a thicker fabric like this one.  A lighter sweater knit would like fall more loosely and shyly, but this thick knit means that peplum will be super-pronounced forever.  And I am okay with that.  Obviously I don't mind clothing that is a bit dramatic.

What is great is that it is very easy to dress up, but surprisingly very easy to dress down.  It looks super cute with a tee and jeans, for instance.  And since this olive brown color is in my wardrobe in quite a few items (whether in a print or this exact shade), I will be able to wear it often! 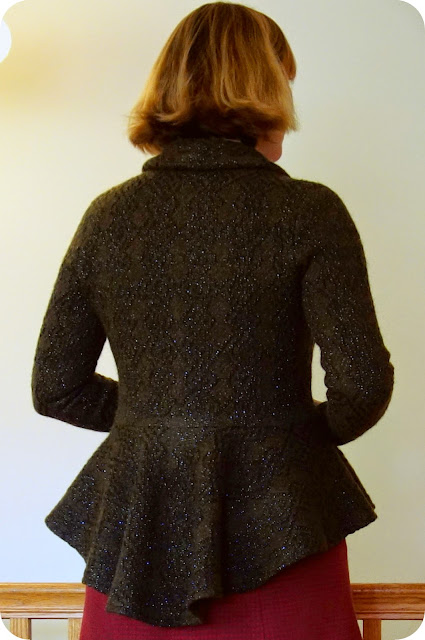 Back view of the the pronounced peplum.  I have a rather large bottom, and this covered it nicely, so pear shapes, go for it.  Don't bother to grade up the bottom half, too, since there is more than enough room for all of our "assets."  ;-)

I did make a size small, but in a stretchier knit, I will likely have to size down to an extra-small since I suspect that the stretchier knit would make the small too large for my frame, especially in the shoulders and neckline area. 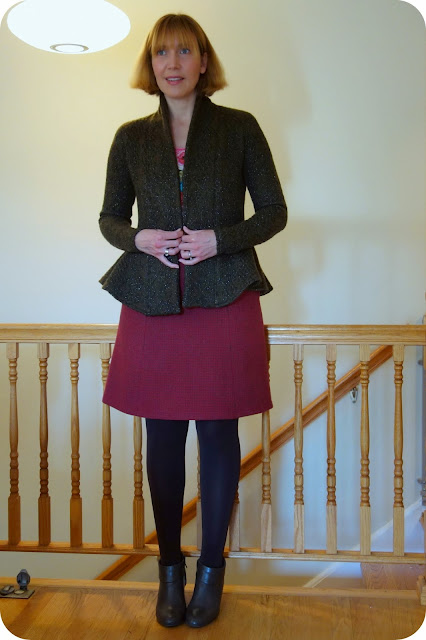 Even though I added snaps to keep the collar properly back like you see on the pattern cover, this collar looks darling when folded flat.  And since the snaps are black they don't even show up that easily (though my hands cover them in the photos I took from far away).  I may even prefer this way, especially with the collar up like that.

BTW, that is another bonus to this thicker fabric, the collar easily stays up, and I didn't even interface the collar.  (Can you imagine how stiff this would be all interfaced up?) 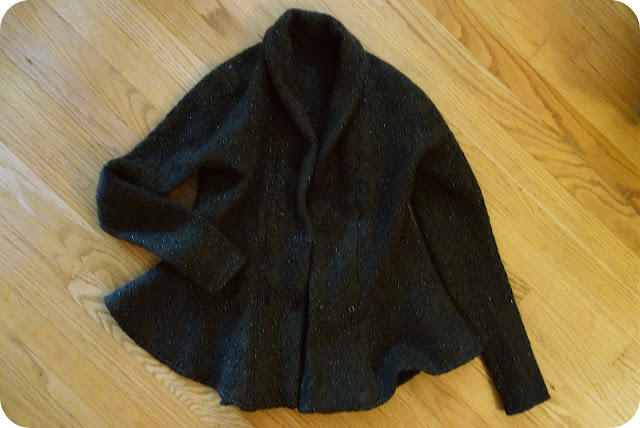 This is a photo I took this morning of it from above and though you can see the snaps, they are not that obvious, so I am fine with having added them.  It is really hard to get the collar to stay back without them, so it was a nice addition, in my opinion. 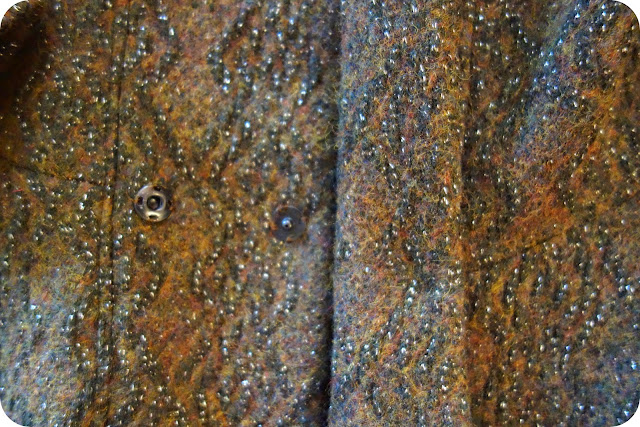 Close up shot of the snaps, both closed (right) and open (left).  I like this shot, too, since it shows off the amazing texture and shine of the fabric.  The fabric is not this light, though, I lightened the shot so you could better see how I did the snaps.  :-) 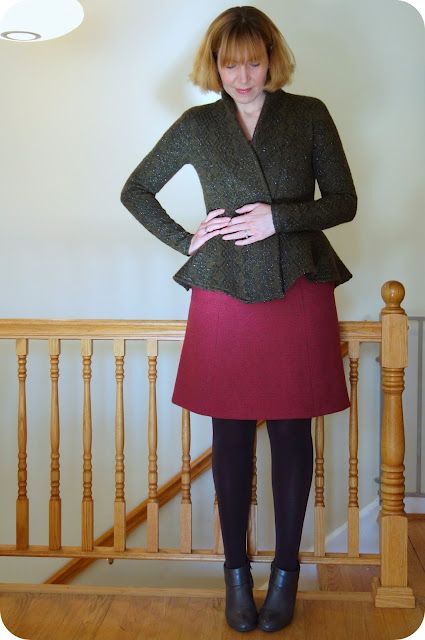 I haven't done this yet, but I did figure out a way I could add one snap to the front part of the collar to attach to the other snaps allowing for me to properly close the front of the jacket so it actually fully functions as a jacket.  I also have plans to belt this jacket since I bet that would look cute, too.

Thank you to Fabric Mart again for the fabric.  So beautiful!
Posted by dinagideon at 10:57 AM