OOTD/Made by Me File: Halloween and a Pizza Costume.

Hey, all.  It has been a week.  Woah.  There hasn't been a lot happening around here, but there is a lot on the docket to be published.  I have been living real life fully, though, so my virtual life has been very muted.  ;-)

For those of you who would like to see the post I wrote for Fabric Mart on the skirt that was part of my last made by me file, check it out here.  I did do that last week, but still have to get around to publishing those posts for here.

Okay onto this post which is not super late, but not exactly timely, either.

OOTD will be first, followed by my son's pizza costume next. 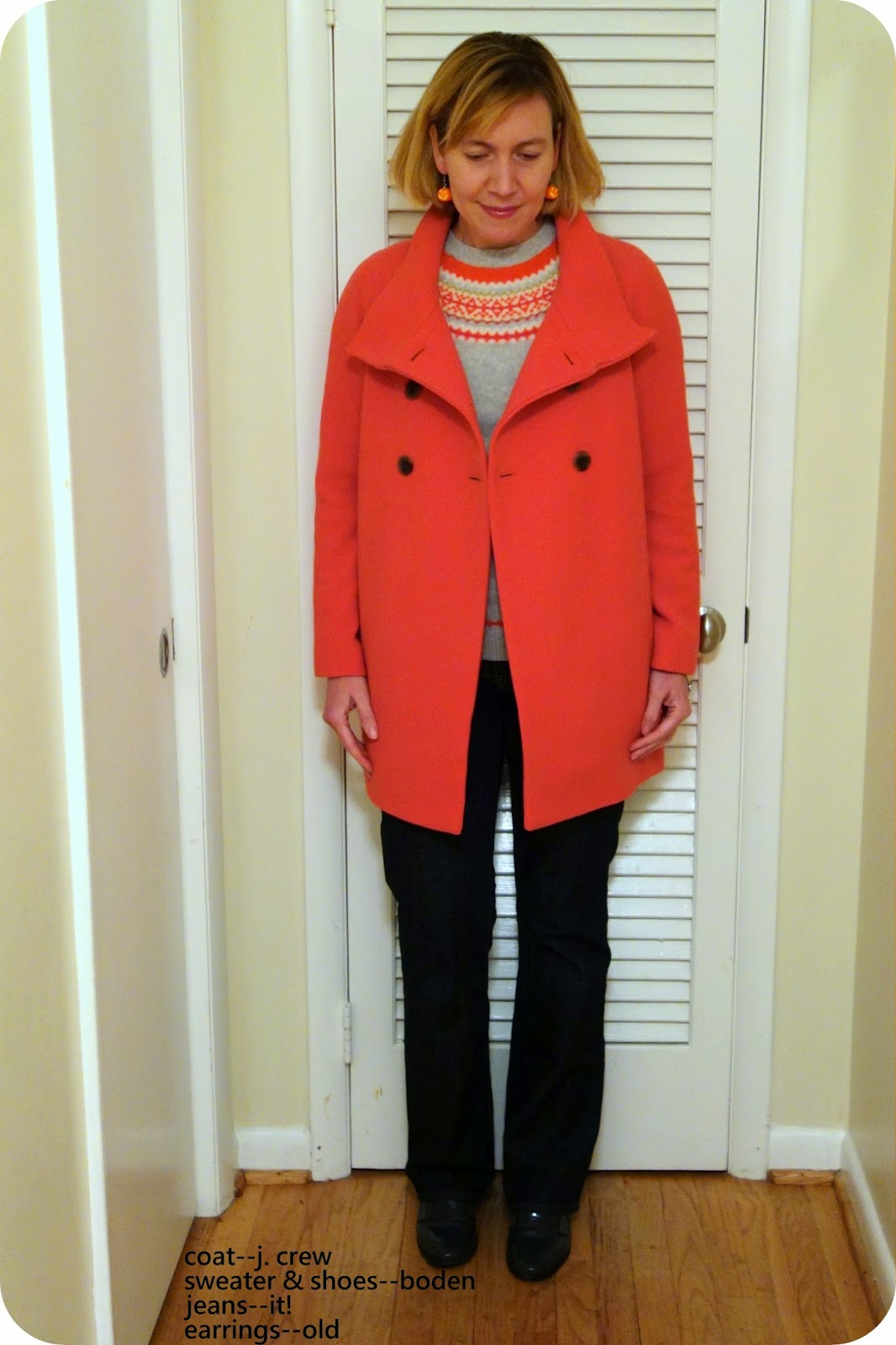 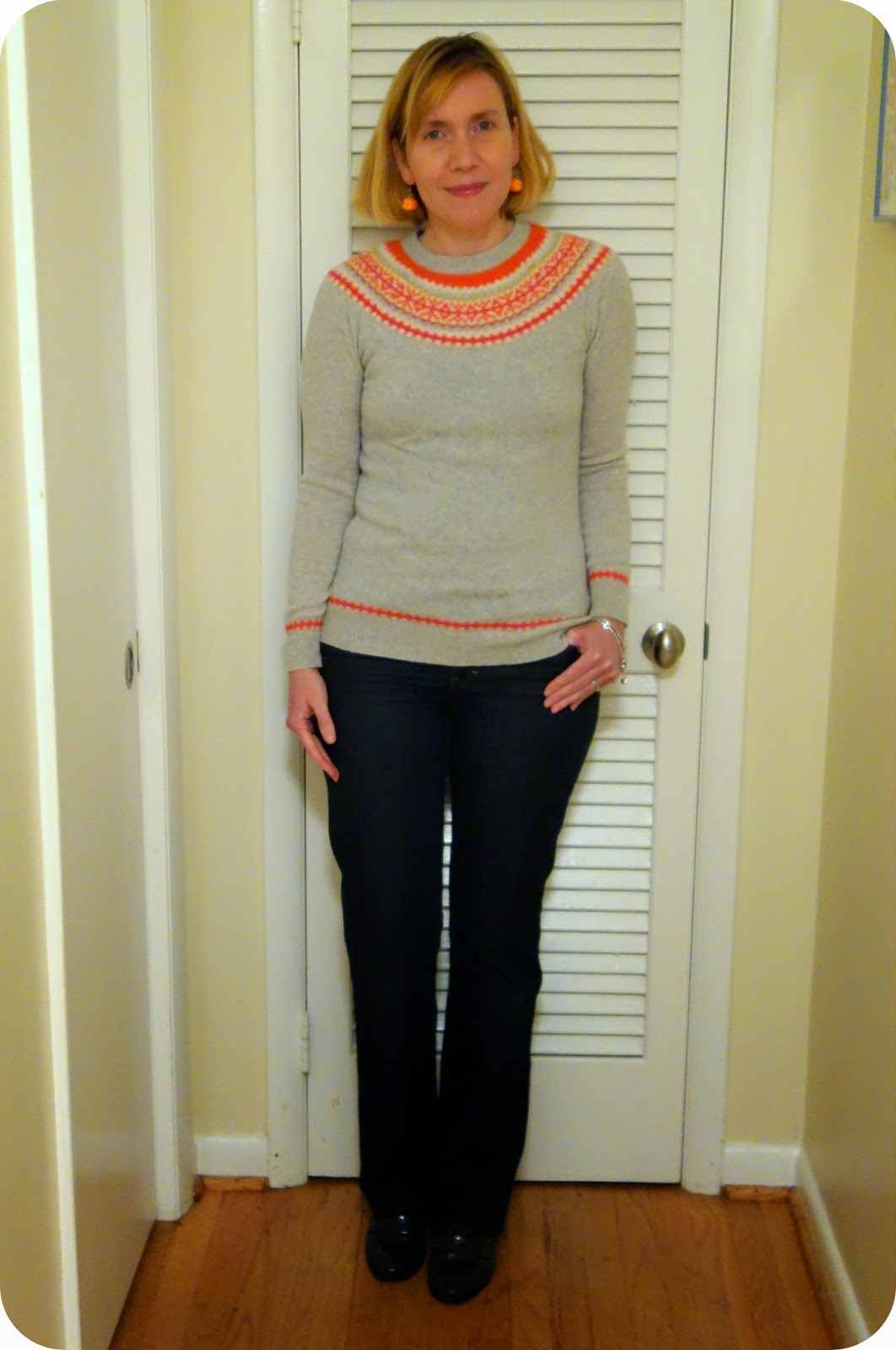 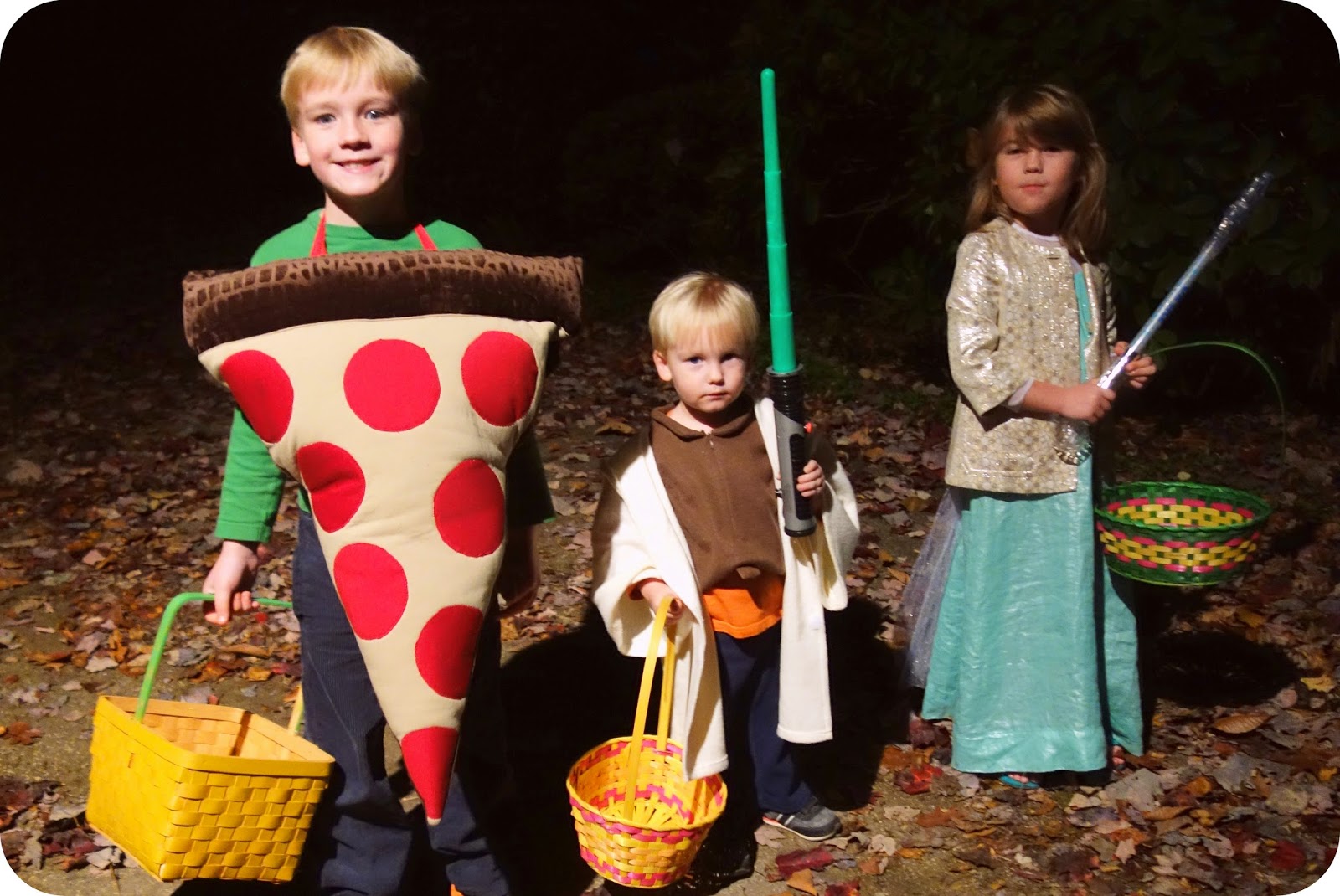 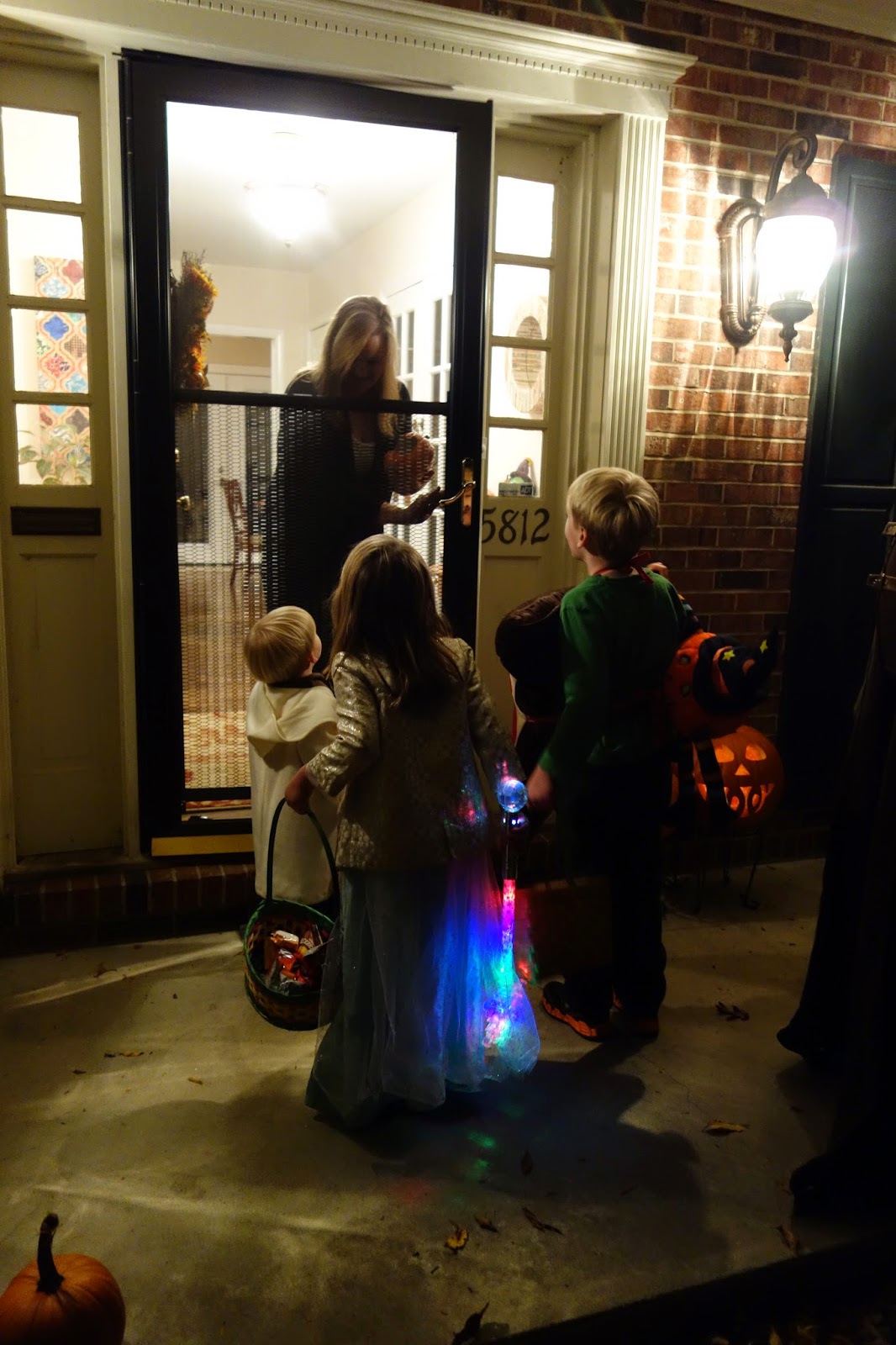 Ease of Wear: (4.5 of 5 stars--5 being the most easy to wear.)  I have had all the bits of this outfit for years (barring the shoes and sweater which I bought last year) so these are time-tested comfortable favorites.  I love the coat, what an unusual shape and color, but very comfortable, and thankfully warm.  It was so cold that night.  (WHY?  It isn't like we live in Manitoba!)

Cool Factor: (4 of 5 stars--5 being the coolest.)  The silhouette works for my frame, so that helps with the cool factor.  At the end of the day it is a fairly simple casual outfit though spiced up by funky Halloween earrings and a very interesting coat.

Anecdote from the day:  The kids had the day off from school that day.  I am a fan, it made getting ready for the night easier AND they weren't super-tired walking around.  Wish they would do this every year.

Also Angus was supposed to be Yoda.  He refused to wear the hat so he was just a regular Jedi. 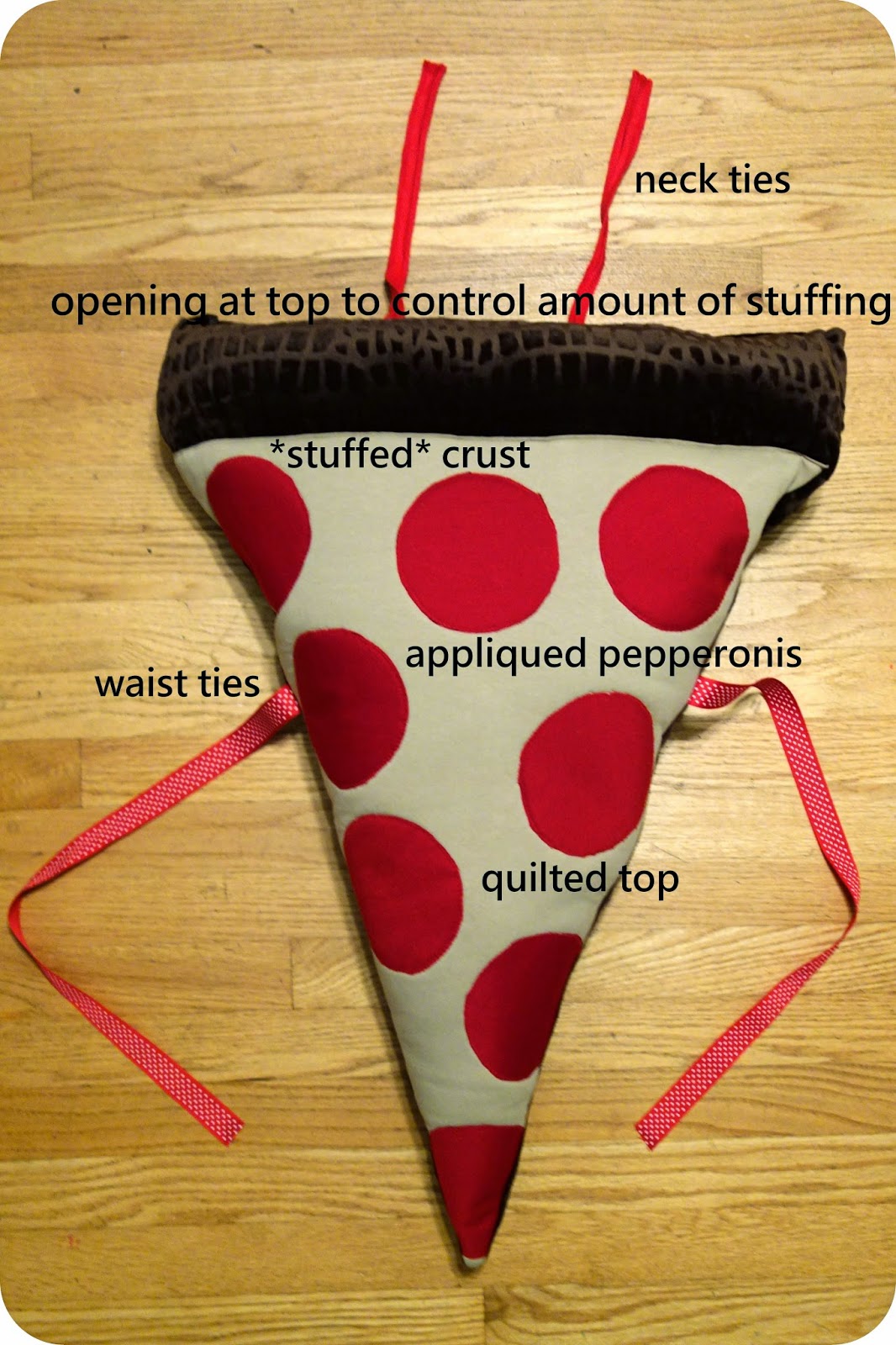 So if you are thinking this pizza costume looks like a stuffed toy, that is because it does function as one, just with added ties to make it wearable as a costume.

When Rex came home from Target one day and said he wanted to be a pizza costume after seeing one in its aisles, I was like, "challenge accepted!"

In the end I decided to make it stuffed, tied on, and in the shape of a slice of pizza. 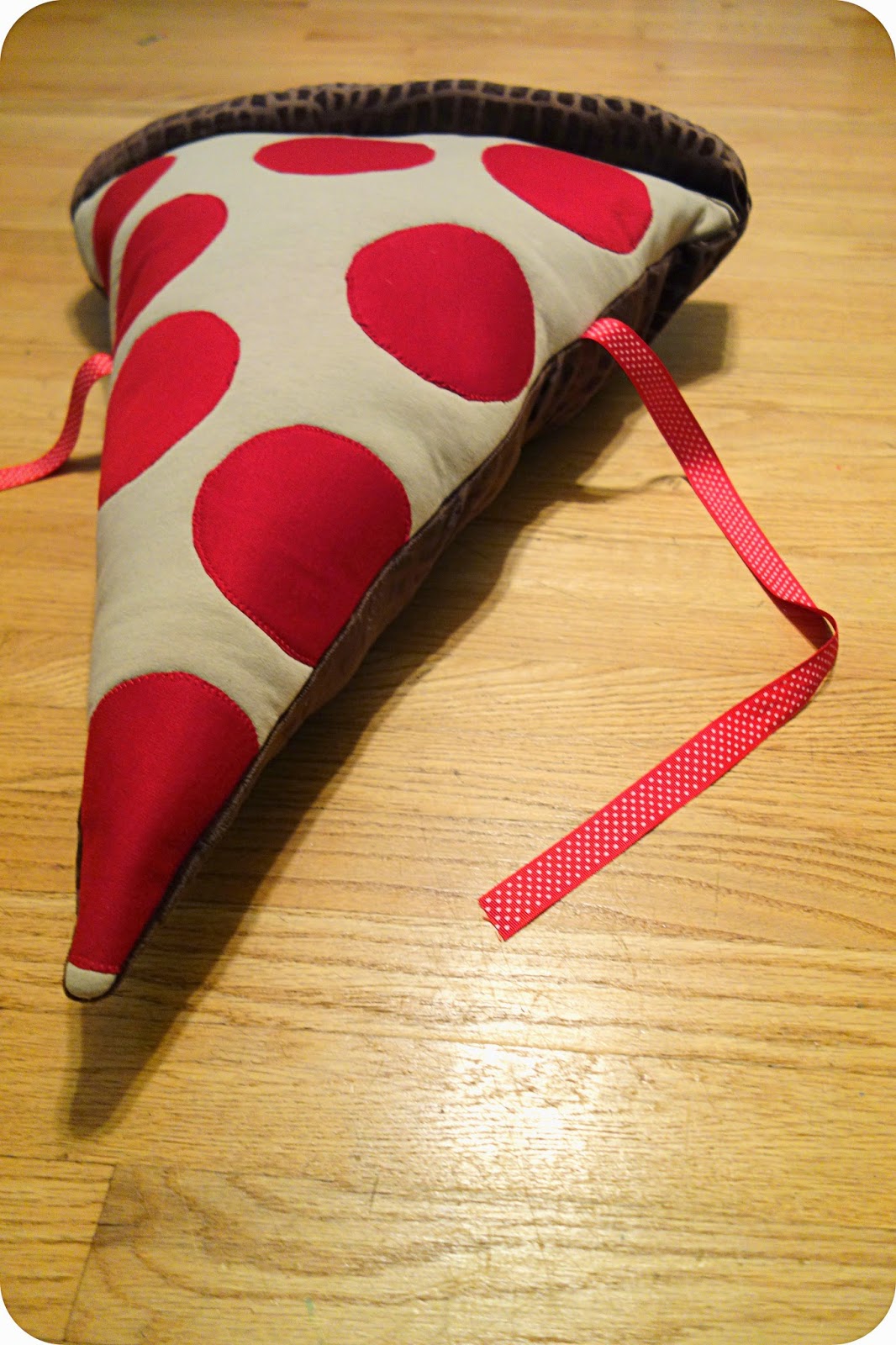 The process of making it was somewhat involved, but the measuring part wasn't terrible.  Basically I laid his school uniform over the tan colored jersey and drew checkmarks where the points were (shoulder points, waist, crotch, and knees).  From there I determined the crust at the top would be at his shoulder line, not above, and that the bottom of the slice would be near his knees.  I then connected the marks with a ruler and made a triangle shape.

Then I figured out that if I used some smaller glass bowls as the template for my pepperoni slices, that would make for the right sized pizza slices, which I then appliqued to the tan jersey using special fusible fabric bonding interfacing with a blanket stitch on my sewing machine.  (The applique looks okay, but circles are really hard to applique as it turns out!)

To give the pizza top some heft and to keep it from collapsing on itself, before I appliqued the slices of pepperoni, I decided to treat the tan jersey and one layer of the (awful looking) brown jersey as a quilt and bonded those two together with a thin fusible batting.

(Btw, the top crust was part of the bottom layer of that quilt sandwich, it just wasn't fused to anything and hung out above the quilted tan and brown jersey lower layer until I was ready to fold it over and stuff it, which happened later.)

Once I had my tan jersey/brown jersey fused together, that is when I appliqued the pepperoni slices on the pizza.  That, in essence, quilted all of the layers together.

After that I went ahead and made the top crust part by folding it over and sewing it to the quilted pizza top.  Then I added the poly-fill and sewed up the seam left open by the stuffing process.

I wasn't done yet with the costume (though that could have worked on its own, I suppose).  I decided that the pizza would look great stuffed, so I made a duplicate layer of brown jersey to match the bottom triangle.  I then took the piece and the quilted top (with crust top), right sides facing (wrong sides towards me and the machine) and slowly and carefully sewed them together, LEAVING the top open.  I also made sure to attach the ties in the side seams at this point (at the waist).  I would later add the top ties, but since the top bit is open, the process of sewing them in was straightfoward.

I then fully stuffed the pizza with more poly-fil (the same stuff from the stuffing the top crust).  It took a lot of the stuff, but this is truly a stuffed pizza and not only can serve as a costume but a stuffed toy and pillow.  Rex has now slept with it multiple nights in a row, so yay for multi-tasking sewing projects!

The top is still open, closed with simple closures.  If I were to wear this as a costume (I can, it just ends higher up on me), I would take out some of the extra stuffing since I don't need all that girth, lol.  For now all the stuffing is staying in... 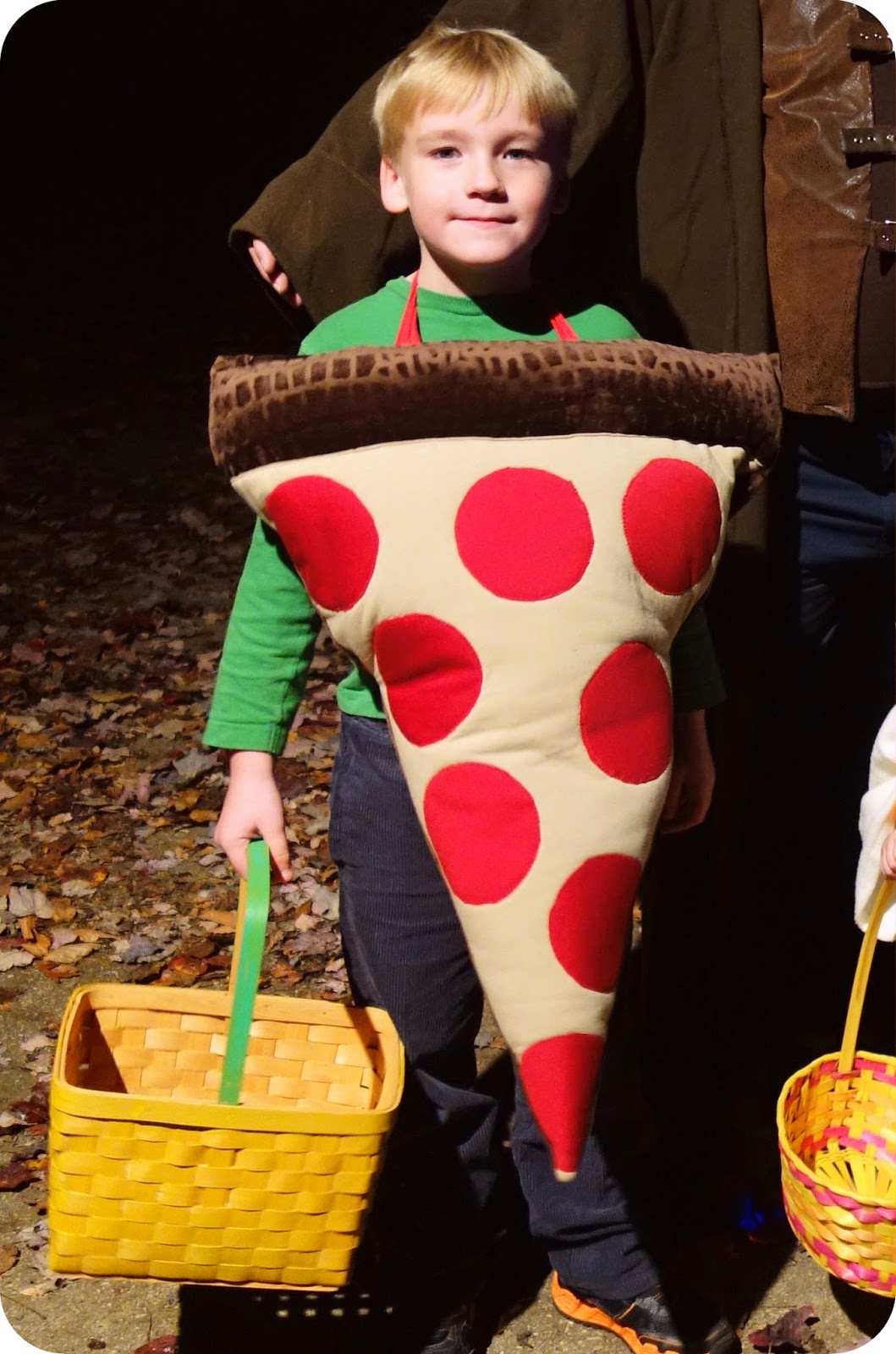 Here it is on him before we were just about to go out.  He really liked it, so I consider that a success.  I also dig that I drafted and figured how to sew it up on my own without a pattern.  :-)

I am not digging that we forgot to get Halloween buckets, so my kids had to use Easter baskets instead.  I thought we should use pillowcases (that's what I used!), but he was like, "NO!"  LOL. Okay, then... 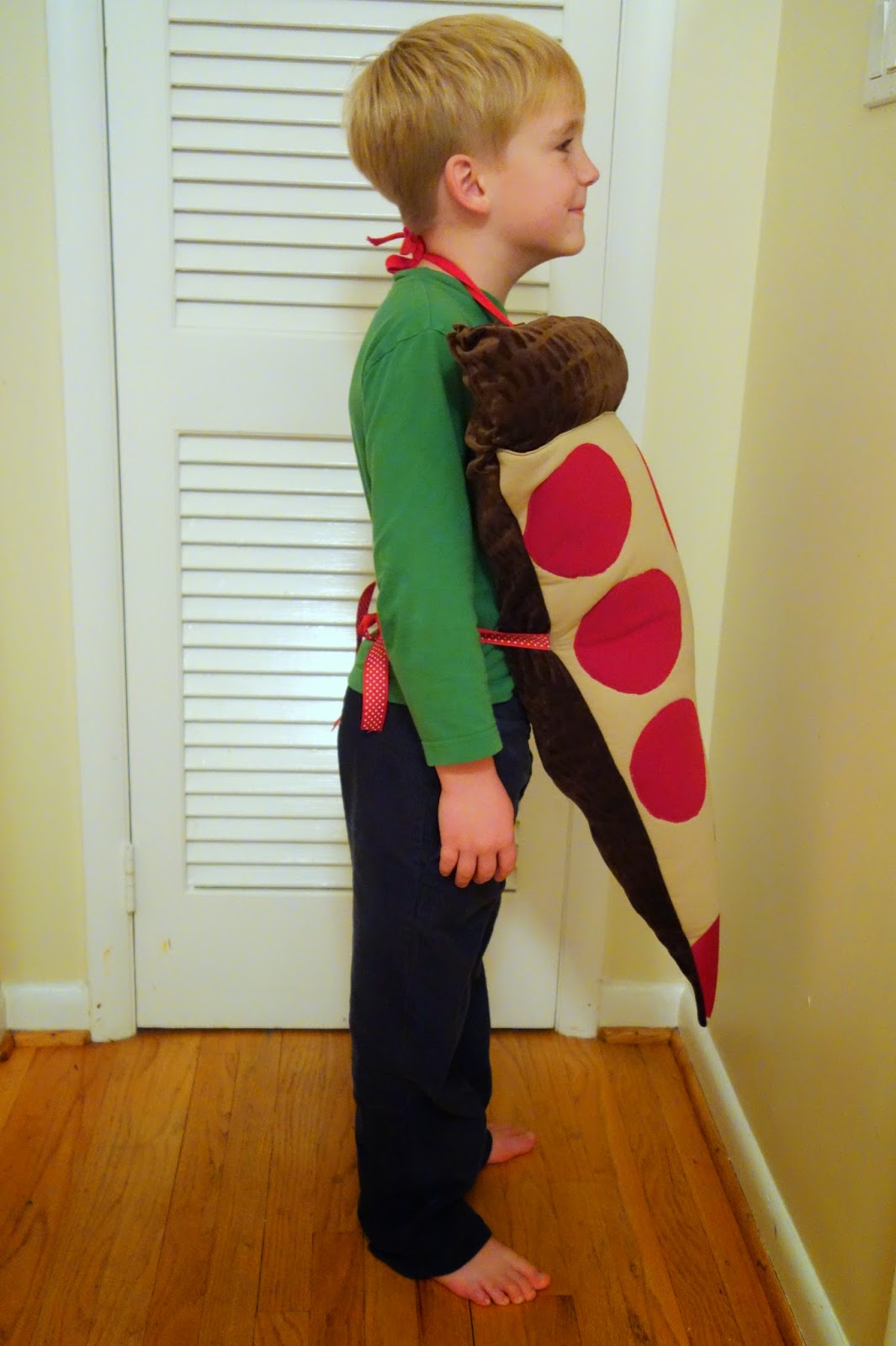 My little man from the side in his stuffed pizza costume.  This view allows you to see what I am talking about when I speak of the quilted top, the bottom layer, and how the ties ended up in the side seams.

(I am not sure if any of you are going to want to try this, but just in case you really want to make a pizza costume it is nice to see this view!) 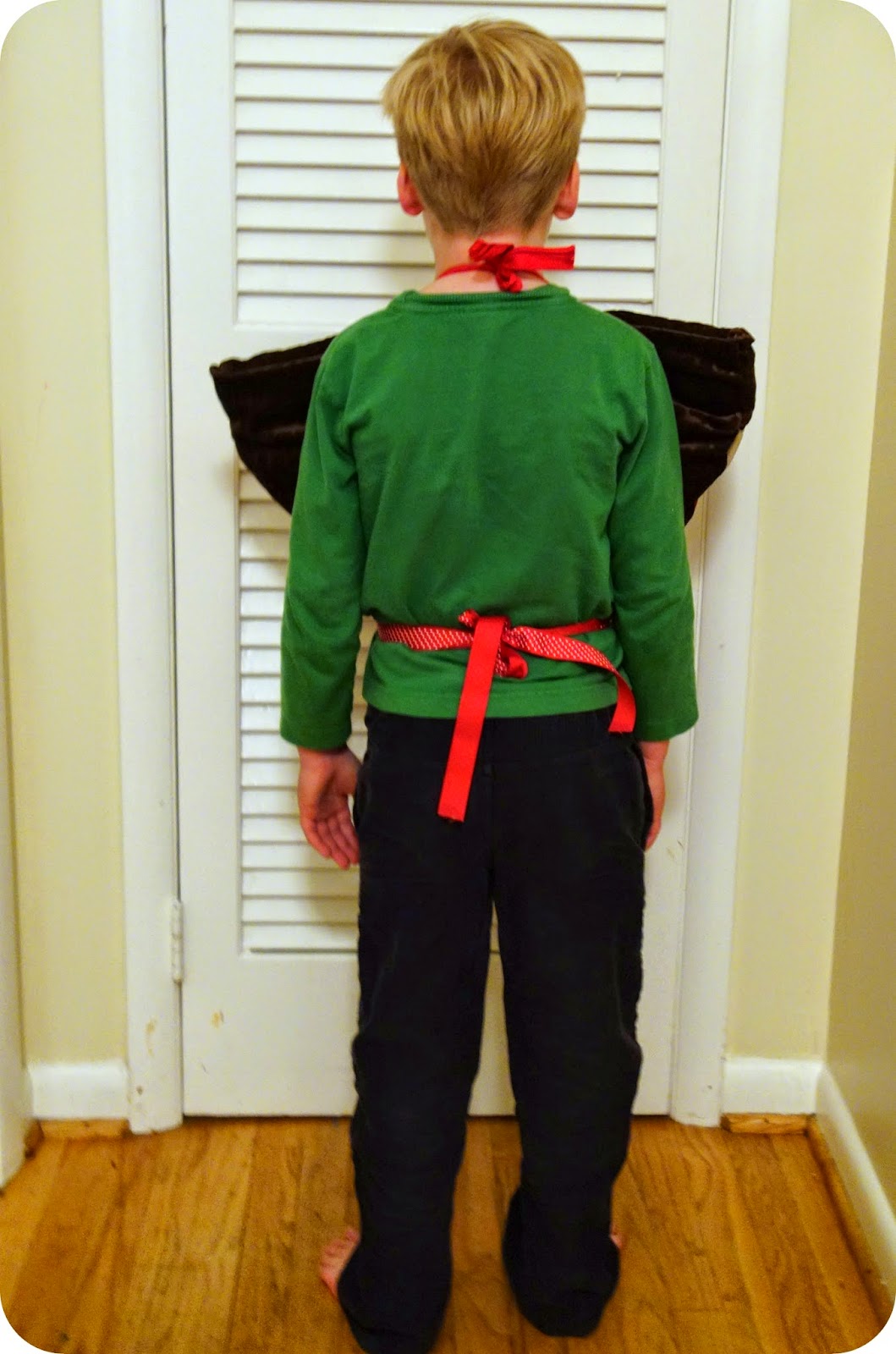 And the back.  Very simple tie closures so that he can grow into it or others can wear it, if they so choose.

I did write this project up at Pattern Review, btw, so head over there if you would like a bit more info.

Okay, that's all for today.  I have a lot of free time now for a while, so I am excited to get back to hanging out at my blog again!
Posted by dinagideon at 8:18 AM