A Pattern, a Texture, and a Bit of Sparkle.

A few weeks ago, I was in NYC for a weekend away.  You mommas out there know what I mean...no kiddoes.  LOL.

We were able to go see a show, have a fancy pants dinner, hang out, enjoy the subway WITHOUT a stroller...it was nearly bliss.  (Of course there were a couple of snafus, but more on that later...)

Above is the outfit I wore to dinner with Mr. Dina on Saturday night.  The top is the Goldenrod Brocade Top (Size 2--I sized down one size) which is the sparkle and pattern from my post's title, the skirt is a herringbone wool skirt with a velvet bow that J. Crew made in 2005 (size 8, purchased from ebay) which is the texture from my post's title, and the heels are Cole Haan, and while comfy enough were immediately exchanged for loafers as soon as we left the restaurant.  The shoes do not spark me as important enough to have their own special part of my post's title, but you all are welcome to come up with an alternate title if you feel like it. 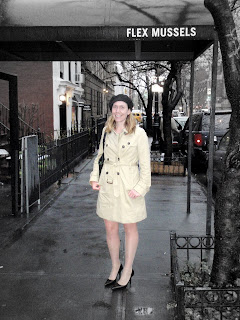 We ate at FLEX MUSSELS!  Yay!

I saw this restaurant randomly on a cook's channel show a few weeks back.  I was literally flipping the channels and not knowing what to watch and I saw the show on yummy seafood places and this place was profiled.

I told Mr. Dina that we needed to make a reservation to ensure we could go at a decent hour.  Did Mr. Dina do that?  No.  He waited until THURSDAY.  We got a reservation, but barely...at 6 pm.  I felt like we were 80.  (Remember that scene from Modern Family?)

Anyhow, once I got over the fact that we weren't going to be eating at the infinitely cooler time of 8:30, I fully embraced the night.  So even though it was raining cats and dogs (LITERALLY--I saw Toonces and Spot both hit the ground), and it was something like 40 degrees (not below zero--but close), I chose to have a great night.

I wore the Icon Trench, a jaunty black beret, and forced Mr. Dina to take a snapshot of me under the Flex Mussels awning, like the crazy tourists we were.

Best part of the Flex Mussels experience?  The mussels were beyond amazing, and the stew-like concoction I got was exactly the right stuff for the terrible weather we had just been through, and the cocktail was decent, but our favorite was dessert!  See, and I didn't know this until the waiter told us, the pastry chef had been on Top Chef: Just Desserts.  Umm, it showed.  His deep fried whoopie pie dessert was eaten by the two of us in under (not kidding here) four minutes flat.

As we were leaving, we actually walked out with Mr. Top Chef (Just Desserts). Zak Young, you are the {dessert} man. :) So here was the snafu, as photographed by me.  You can ALMOST see Toonces and Spot, right?

Have a great Sunday.  Tomorrow, in the midst of a Outlet Bella post spectacular, you will see the other day in NYC, which had no Toonces sighting (meow).

P.S. I am sort of in and out over the next few days.  If you leave a comment, be aware I might take some time getting back to you.  :)  But if you leave a question, I will try my hardest to get back sooner rather than later.
Posted by dinagideon at 9:00 AM