Made by Me File: The Joy of the Red Coat. 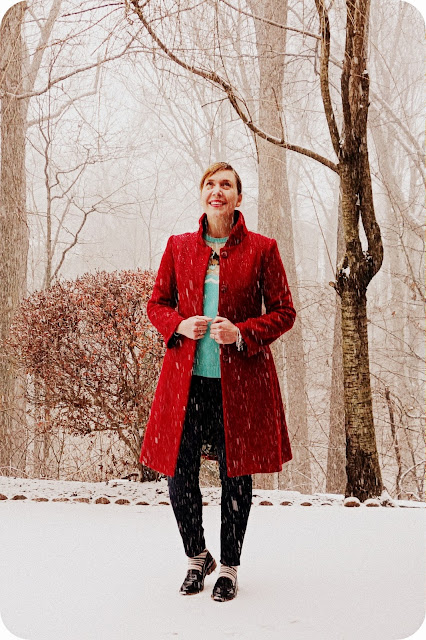 Before I start talking about the joy of making the red coat, I encourage you to visit the post I wrote up at Fabric Mart first, especially if you are a sewer.  I am sure it would be fine to replicate, word for word, and photo for photo, that post here, but since this blog is more focused on style, fashion, and garment reviews, I am choosing to leave the bulk of heavy sewing info there.

I am choosing to focus here instead on the journey I took to getting to a place where I made up a fully lined, fully tailored red coat in a month's time.  :-) 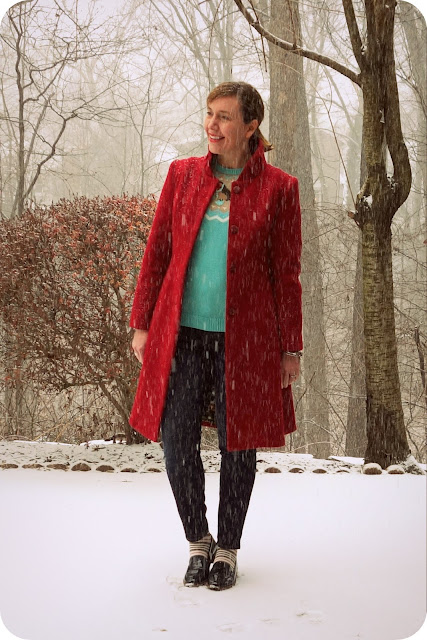 The back story here is important.  I wrote to Fabric Mart and told them I would love to make a coat for my January make.  I always enjoy picking out my projects with them, but most of the time the projects are not so involved.  Usually I'll make up a dress, or a top and pants, but I tend to not sew up intense projects as they don't really fit in with my hectic school and life schedule.  But dang it, I really wanted to challenge myself, so I said to myself I could figure it out and make it happen.

I asked what coating they had in stock and they mentioned that they were getting in a red wool, and if I was interested they would send it my way.  After looking at, I leaped, even though I wasn't fully convinced that the red would be "classic" red enough.  It definitely didn't look like a yellow-based red (which I usually wear, it suits my warmer complexion), but it didn't look like a blue-red, either, which I know would look horrible on me.

It ended up coming and I fell in love since it was indeed a true red, with no additional tones of blue or yellow.  The color is one of the four universal colors all people can wear, regardless of skin tone.  Looking at that universal color chart, it's true.  I normally can't wear purple, but the one purple on the list is the only shade of purple that doesn't make me look ill. 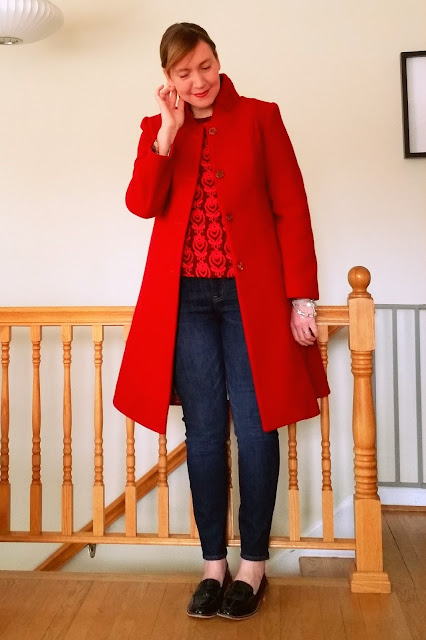 Deciding on a coat shape and design took me FAR longer than you would think it would.  Especially considering that once I had figured it out, I knew immediately what to do.  I hemmed and hawed over which design I wanted for a week or so.  Did I want a double-breasted trench, did I want a full a-line skirt on the coat, did I want a more modern shape like a cocoon?

It wasn't until I put on my Alabaster Tweed coat from J. Crew that I realized my design was under my nose.  Even though I didn't use a shape or coating like the Alabaster Tweed one, I decided I was being silly not looking through my coat closet for inspiration.  After all, you all here (especially if you have been reading for years), know how much I love my coats.  We may not wear them all the time here, but I adore them all, and wear them every chance I get.

If you have been reading the blog for long enough, you'll know exactly where I went to find my design inspiration, my Sybil coats, and my Bella jackets.  Ever since I started sewing, I knew that one day I would want to try and make my own version of these and get them in my wardrobe, but with my personal measurements and aesthetics leading the way, not one of J. Crew's designers making those choices for me.

And I do fully realize I am being derivative here, but at least my version is a bit different, especially in the lower half of the coat (the Sybil is a more straight up-and-down shape). 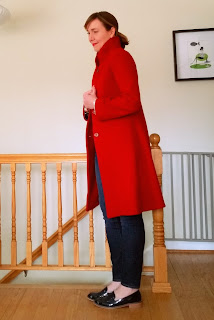 So I stopped my constant searching through my coat patterns and ebay for the "perfect" coat choice, and decided on the two coat patterns that would come together best to suit me and to realize my vision of the red coat I had in mind.

Vogue 8626 is a pattern I had seen over at Sewing Pattern Review a couple of years ago, and when I saw it, I swooned.  It was so pretty, feminine, and yet regal, at the same time.  And it was out of print.  It took me a few months, but eventually one in my size came up on ebay, and I bought it without hesitation.  The only issue I had with the coat was the design of the collar.  I don't know if you can tell, but when the collar is buttoned, it makes a weird pointy collar jut in one direction, and the asymmetry is too much for my eye, and I knew it would bug me if I made it up that way.

McCall's 7024 is a pattern I had seen when it came out and bought it as soon as possible.  I loved the collar because of how much it reminded me of the Sybil and the Bella.  Really the rest of the jacket is fine, but the collar was what I most wanted.  Though it is designed with a drawstring, I knew I could probably (and eventually) figure out what to do to omit the drawstring and have it properly stand up. 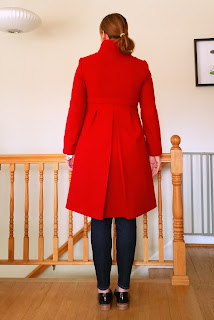 I had to make a muslin to ensure I was using the correct measurements, and thankfully, they were pretty close to right.  I did note that I needed to change up the way the side pleats on the back laid (they favored opening up to the center pleat and it didn't look right on me, so I chose to turn them into box pleats).

I am pleased that Vogue 8626 has cup sizes.  I have a very small bustline, 32B if I am lucky, and I have noticed that any pattern that doesn't have specific cup measurements built in will often manifest themselves in a bit of wrinkling above my chest below my collarbone.  The same thing happens when I wear a bra that is too big (which is a lot of the time, it is really hard to find a 32B bra that doesn't have underwire).  This coat has an A cup bodice, and it is a dream fit up there.  Seriously, hands thrown in the air, waving around, kind of fit.  I know fuller-bust ladies get a lot of attention for having to make FBAs on their clothes, but for those of us who are wee-er up there than average, have to do the same thing if we want a good fit.  People notice it less when things don't fit me properly since it doesn't mean gaping plackets or straining streams, but I get really bothered by those darn wrinkles.

This doesn't mean I am going to take on the challenge of the small bust adjustment every time I sew anything for my top half, but for tailored garments I darn well will.  It is worth the effort!

BTW, the belt above is called a Martingale belt.  I always just called it a "half-belt at the back," but now that I know what they are called, I am gonna throw that term around like it's hot.  LOL. 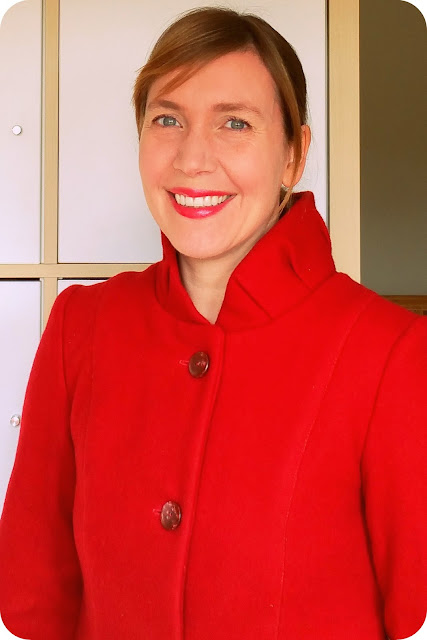 So the collar, the most important portion of my coat in realizing my vision...turns out the McCall's 7024 is a great dupe for the Sybil coat.  It is nearly the same.  The Bella is a bit off, as the Bella collar sits on a faux collar stand.  The way I made it stand just so was to interface the non-pleated side with fusible hair canvas on the bias (wanted it on the bias so it would be more easily molded when I was steaming it, on the straight grain I would have had a few more struggles to shape it since the straight grain prevents any stretching).

The buttons.  Well, it turns out that even though I had chosen a near match for the Sybil coat (they seriously are the same buttons as the ones on my other coats, but red), I wanted to use a flatter, variegated reddish button instead.  Now it fully is a coat that is "inspired by" but not a samesy copy. 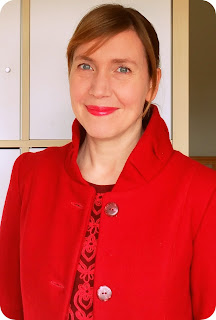 Now that I have published this post I can actually start wearing the coat out and incorporating it into my ootd postings here and at Instagram.  Yes!  (I have to wait until the post publishes over there before I publish here.)

I know that some of you might have questions, so if you do, I encourage them.  Maybe some of you can even make your own versions of the Sybil/Bella?  I would love to see some more of these out there in the world of sewing.  :-)
Posted by dinagideon at 6:35 PM