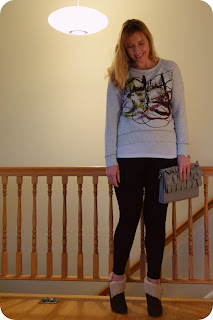 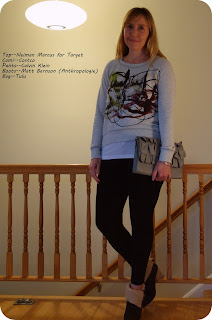 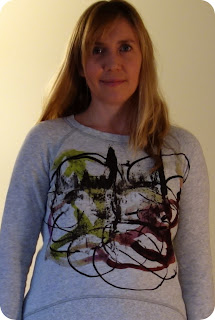 Where: Target to get a gift card for Rex's teacher for her birthday.

Ease of Wear: (4.5 of 5 stars--5 being the most easy to wear.) The outfit consists of a souped up sweatshirt and sweatpants.  It doesn't get any more comfortable than this...

Cool Factor: (4 of 5 stars--5 being the coolest.) For a sweatshirt/pants combo, it does have more cool than I usually have, thanks to the Matt Bernson Minx booties that I got on super sale at Anthro (they call them the Shearling Cuffed Booties).  I have since worn these booties multiple times.  The sweatshirt was the only item (I think this, don't know this) that seemed to sell well from the Target/Neiman Marcus collaboration.  It had the distinction of being unique, wearable, and well-priced (a titch under $30).  The other collab items were much more expensive and not as wearable.  The Proenza Schouler name helped, too, I am sure.

My stepmom also bought it, which sometimes happen.  She will show up at the house wearing something, and I will disappear into my room, grab the same item, and be all, "heehee, great minds!"  ;)

Peggy (She Hath Done What She Could) bought it and wore it recently, too.

Anecdote from the day: CW came with me to Target.  We spent two hours just walking around and enjoying it all.

I also happened upon the vestiges of the Neiman Marcus collab and saw that there was quite a lot left and at insanely great prices.  I ended up grabbing the Tracy Reese sequined blouse that I wore here (on my brother's bday--same as Rex's teacher) for much much less than it originally cost.  In fact, that sequined blouse was less than the sweatshirt.

It was very foggy that night, by the time we got to our car at 9 pm, the entire parking lot was shrouded in a cloud.  Pretty cool, as I love dark nights, ambient lighting, and fog.  But I am weird, I gather most people don't like weather like that.  But then, I have always wanted to live in a haunted house (and did, briefly, in 1995). 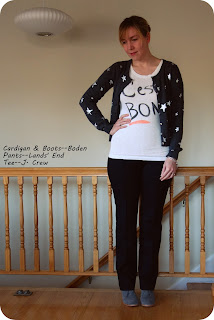 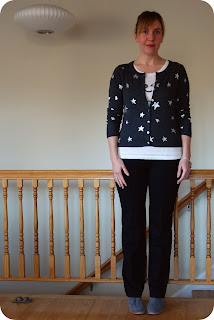 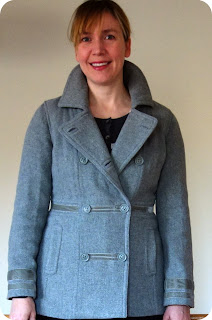 Ease of Wear: (3.5 of 5 stars--5 being the most easy to wear.) The whole outfit was meant for comfort since I was to be seated next to my (now defunct) sewing machine for the class.

pants are really comfortable, but not especially sturdy.  They, for who knows what reason, placed a raised seam on the front of the pants.  By the end of the day, the seam had been broken in a few places which means the seam looks shoddily done.  Guess it is good that I replaced my now defunct sewing machine with another, so I can sew the seam back.  Sigh.  (Other pants I have received from Lands' End are much more sturdy.)

is a Johnnie b. item that I reviewed a little while ago.  I like how I styled it here way more.

Anecdote from the day:  The tee was popular with the other sewers in the class.

I will get to the story of the defunct sewing machine later, but let's just say that I was beyond ticked when the bobbin screwed up the entire innards of my machine.

I did replace it with a much higher rated Brother machine that has no bobbin issues, so here's to hoping I have that machine for many years to come.  Thankfully the sewing machine primer class taught me everything I need to know about sewing machines in general, so I can get the new machine ready for my next sewing class (I am making a very basic top). 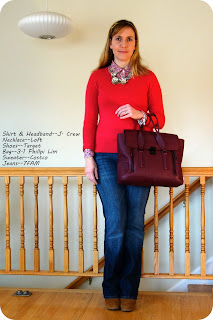 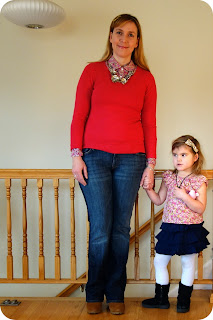 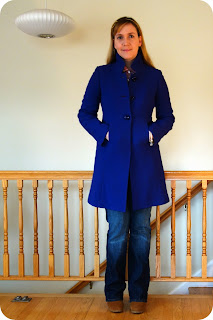 Where: We went somewhere, but I literally can't remember where*.  It was Inauguration day, though!

Ease of Wear: (3 of 5 stars--5 being the most easy to wear.) Outside of the shirt coming untucked from the jeans, it was a very nice, comfortable outfit.  The jeans are a size too big, which means I should probably sell them, since I am most likely never going to get pregnant again, which means I shouldn't be gaining so much weight that I need a pair of "in between" sizes jeans.

Cool Factor: (2.5 of 5 stars--5 being the coolest.) The Pashli Satchel and the Sybil Coat are the only things in this outfit that are even remotely cool.  I definitely have the ultimate SAHM outfit going on here...jeans, printed button-up, v-neck sweater*, boots, coat...

CW's little outfit and pose are pretty cool, though.

*Did you all know that if you go to Costco at the very end of the holiday season you can get cashmere v-neck sweaters from them for $30?  And it is really nice cashmere, soft, no pilling, etc.  I lucked out in finding this hot pink one, though, since it was the only one left in that color and in my size.

Anecdote from the day: Well, since I can't remember what we did, outside of chores (those always happen on days off from school), I don't have any anecdotes.  I do recall CW asking me to wear this shirt because she was wearing hers.

I can give you an anecdote for my seemingly tired face, based on these photos, I am wondering if I should get checked for anemia.  I had no idea that I looked that pale, and whenever I get that pale-looking, it usually means I am suffering from anemia again (I have a history of getting it, sigh). 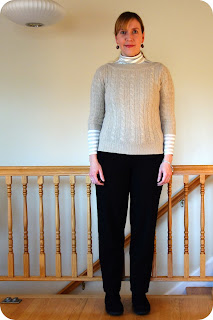 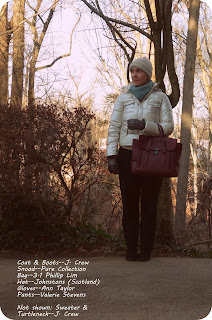 Where: Preschool Run and the Little Gym.

Ease of Wear: (4.5 of 5 stars--5 being the most easy to wear.) People. Those are cashmere pants.  They are all at once warm and perfect for running around after the world's largest man baby.

Anecdote from the day:  Coldest dang day in three years.  I even made Angus wear a fleece coverall (outerwear with a hood, built in gloves, and snaps for changing) from baby Boden

to his little gym class (he took it off to participate, obviously).  We don't usually have cold enough temperatures to justify its purchase, but I know once he outgrows it, I can sell it for near what I paid.  (And it does feel good to know he won't freeze on those really cold days.)


Okay, lovely folks, that's it for today.  What have you all been wearing lately to keep warm, yet stay comfortable?

For my readers who are Pure Collection fans, they have introduced their new spring line, and I have been able to access a coupon for 25% off with free returns that is currently in my sidebar (and below this paragraph).  I am slowly working on a "picks" post, but that will be whenever I get a few spare moments.

Also, I didn't do a specific Boden Catch of the Day post today since most of the items in the sale today are ones that I have already talked about to death here at the blog.  I will say that the tops and sweaters that they included are of the "versatile, practical, and basic" end of the sartorial spectrum, so if you (or one of your family members) has a specific need for that kind of top in their wardrobe, it may be worth a look around.  I have added the affiliate coupon below for you all to use for free shipping (the 15% off in the coupon doesn't work with Catch of the Day items). 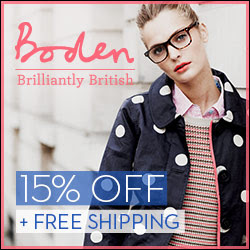 Posted by dinagideon at 6:29 PM