Made by Me File/OOTD: High Waisted. (Vintage Simplicity 7688.)

Gonna do the ootd portion of the post first, then go into detail about sewing up the shorts. 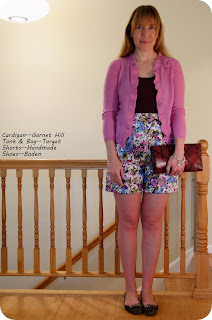 Ease of Wear: (4 of 5 stars--5 being the most easy to wear.)   Since the shorts were crafted to fit my body exactly, and made from a nice soft stretchy cotton sateen, I was very comfortable all day.  Too bad my hip really hurt (more about that below in the anecdote section) because had I been feeling fine, this outfit would have been a 100% winner.

Cool Factor: (2.5 of 5 stars--5 being the coolest.)  High-waisted shorts had a resurgence last year in fashion, and likely are going to be present this summer as well.  I like the look, a lot, but because they have been done up in a pretty floral and not a distressed denim, they are not "cool," just lovely and pleasant.  And that works for me.  :)

with  the outfit, they worked perfectly with the outfit but have a teeny edge that allows them to be a bit unexpected.  Originally I had planned on sandals, but switched to the flats at the last minute.

Anecdote from the day:  (If you are really not into "wah-wah, woe is me," and that's fine, of course, you may want to skip this section.  LOL.  Trust me.)

I don't like being vulnerable here at my blog, but ever since May 2, I have been feeling really blue.  It all started on the evening of May 1 when my left hip felt like it had been wrenched out of place.  I have had issues with my hips since having the kids (the last few weeks of CW's pregnancy I had to use a cane my hips hurt that bad), but never enough to justify a visit to the doctor.  Honestly, I am just tired of having to be "fixed" all the time.  Fortunately I took some ibuprofen the night of the 2nd and was fine the next day, but it still zapped my energy and spirit to be in pain.

This "blue" period has absolutely nothing to do with my blog, my kids, or my family, in fact it is all on me, and my perception of how others perceive me out in the real world.  To put it mildly, I have been feeling like a misfit that no one likes.

Every day I amble around, trying to keep my cool and a smile on my face, and in return I get doors slammed in my face (while holding the baby), pushed out of the way by strangers, tailgated by drivers who are angry that I am only going five miles above the speed limit, yelled at by administrators at my son's school because I was hoping to have Rex sit for two minutes in extended day so I could take CW to the bathroom (while holding Angus), and being snubbed by the other moms at pickup time when I go up to talk with them*.  Of course I am human and not a robot, so in all of these cases I have (as soon as I am alone) cried.  As soon as the tears stop flowing, I don't just brush it off and pick myself back up, either.  I wish I could, but honestly, it has been easier to face my bedspread and shut out the rest of the world.

From time to time I do meet other people in this area who are genuine and sweet and caring, but they are definitely few and far between.  I hate that where I am from is like this, full of "me first" people who are only looking out for number one and don't care who they step on to get there.  I think of the examples above there are only two instances where it wasn't a "me first" situation, the one with the school administrator (though she didn't have to scream at me, of course), and the one with the other moms (as much as it hurts to admit it, I am probably not cool enough, especially since I don't have the tight "lululemon butt" that they all have--I am not even kidding, btw, can bounce a quarter off those tight derrieres).

I realize I am not going anywhere, can't leave my home of thirty years and don't really think I should feel I have to in order to find kindness, but I do know that as I am aging, it is all starting to tire me out.  I just don't have the right stuff to ignore the a-holes and be okay with being treated like dirt because I am not fast enough, assertive enough, or cool enough.  Ugh.

*this happens only at Rex's school, the same place I went to as a kid, btw.  CW's preschool parents are super nice and friendly.  I am a little worried that it is going to be like this for the next thirteen years--Angus is going there, too.  I will probably figure it out soon enough, and find other moms who do like me for who I am, but it feels like I am invisible most days.

(BTW, those of you who read the above, and stuck through, thank you.  I just needed to get it off my chest.  I have a few good friends who know not everything is not rosy in my life, but in general, I have to hide my true feelings every day and a lot of this has been building inside of me.) 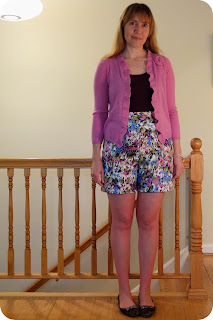 I have a stash of vintage patterns in my collection, some gifted to me and some found on ebay (so cheap, btw), and though I want to jump right into them, I want to make sure I can really sew before cutting into them.  That said, I knew that I could at least give Simplicity

7688 a try.  This 1968 pattern is pretty awesome, btw, since it has three lengths of shorts/pants in one package that can be customized to your height. It also has an insert on fitting for trousers, which is really valuable to me since I have the biggest problems with fit on my lower half.  With the assistance of that chart, btw, plus some internet searches (Colette has a great tutorial, too), I made these shorts and other pants exactly right for my legs/hips/crotch depth.

I had planned to make the "Jamaica shorts" length, but after examining what came with the pattern, I realized that was the one pattern that was not included (this happens with old patterns, pieces may go missing).  No biggie, though, since the short shorts were in there, and armed with my info on lengthening pants/shorts, I decided to turn the three inch inseam into a much preferable five inch inseam. 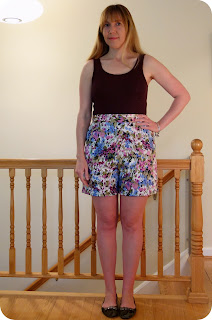 The only thing that ended up being a bit off for me was the waistband to crotch length.  I am tall, and though most of my height is in my lower half, after spending many hours figuring out what is going on with my body for perfect alterations, it turns out that I am shorter than I thought between my natural waist and crotch.  The next time I make this pattern, I will probably go ahead and cut it down to the "average" height length, while maintaining the five inch inseam.

To fix how high the waistband was going to be, I decided to fold down the waistband which meant that instead of being "grandpa-waisted," I would end up with a shorter (and less ridiculous) "high waist." 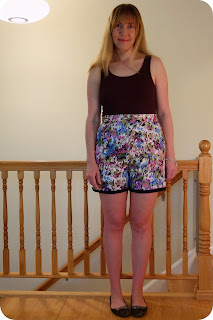 I didn't want to lose any length off the leg, so instead of hemming it like you normally should (folding under about 1/2 inch, then another 1/2 inch to get a 1" inseam), I decided to use some bias tape to face the hem.  Basically I attached the single fold tape to the front of the shorts, then folded it under and secured it in place.  A nice bonus is that if I ever decide to change up the shorts, I can flip the tape up, and voila, a different look.

Fwiw, I decided to wear the hem down that day. 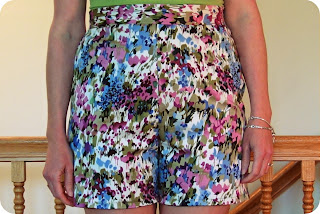 Patterns back then were all one sized, and the one I used was for a 29" waist and 40" hips.  I was nervous the 40" would be too small, but it fit exactly right.  The 29" was a good call, just the right ease to keep these shorts super comfortable.

BTW, this pattern came together fast.  I cut, prepped, and sewed them all in one day.  My current pattern, though, has taken me so so long.  (Admittedly I have done a lot of extra things to the top, including underlining and facing all raw edges, but still, ugh.  At least I can finally say it is done, though!)

Okay, that's it.  Again, thank you all for bearing with me through this post.  I know most of the time I keep things light, but I felt like it would have been disengenious not to let you all know that I have been struggling emotionally.  :-P

Boden fans, today is the last day of the current "trim," which includes many current high summer items.  I am planning on grabbing the Harbour Island Dress

, which if I am lucky will come in the mail from PA.  (Would love to wear that one soon!)  If you use the below coupon, you will receive an additional 15% off, which equals decent savings.

Have a great Sunday (or what's left of it)!
Posted by dinagideon at 2:52 PM