Two days ago, I very belatedly announced that tops and tees were on sale in Boden's catch of the day.  I also made a promise to be back the next day with more on the sale that followed it, which was yesterday, and was for knitwear.  Of course as you all know now, I didn't announce that one, since I chose to publish this post instead.  But I do want to give a big thank you to both Lou and Lisa who did give us the schedule of items that would be in the Catch of the Day sale.

Unfortunately (or fortunately depending on your wants and needs), the American version is different than the British version.

It's trousers and shoes Thursday and more excitingly 20% off clearance on Friday and Saturday.

Hmm.  Well, I am not sure which one I prefer.  And I am not sure why Boden didn't make outerwear a bigger deal for the Brits, especially considering half of the United States will start seeing warmer weather in a couple of months, or are already seeing warmer weather simply by existing in the lower 15% of our country, where winter is a sneeze of cold weather for a day in January.  (Ask my mom in San Antonio about southern Texas winters, and she will get enraged at how flipping hot it is there.)

Anyhow, so today is outerwear as the "catch," and if you like something from the section and need it now, go for it.

Regarding any past reviews I have done, I have one for the Eliza coat here, one for the Ingrid Coat here, and one for the Rainy Day Mac here.  I am irritated by the Eliza coat being back as part of the regular Boden section, though, since right before Christmas that same coat could be had for around 30% off.  I know it is only 10% extra off, but that there is a winter coat (okay, it is a "light" winter coat) and should be part of the winter sale schedule and not this transitional time.  I think I am being extra crabby tonight, in case you can't tell.  ;-)

Just realized that the knitwear is on sale today, too.  I went to go peek around a bit and see what was in that section, and all of those pieces say "20% off," so I guess they extended that sale?  Well, good!  That hopefully helps some of you all out there.

Okay, that's it for today.  Tomorrow--yay for pants, skirts, and shoes!  Unless you are in the UK where you get to celebrate an additional 20% off sale items!

P.S. My son is doing better.  His broken leg is still broken, but he is able to be moved without screaming in my ear, so that's good.  He doesn't have to take as much pain medication to feel good, as well.  How fast he will be up and able to use crutches in school is another thing entirely, but I am glad that he is feeling like himself again.  He is napping a lot, so I think that probably helps, too.  Thanks for all of your kind words about him to me, they helped keep my spirits up, too!  :-)

Link to sale.  If you see this tomorrow, it probably will take you to the pants, skirts, and shoes sale. 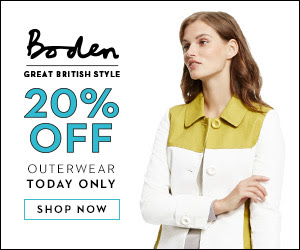 Posted by dinagideon at 6:32 PM