Hey, all.  I am feeling mildly uninspired lately.  I 100% know it has to do with pain and feeling like the bottom is going to drop out if I don't get things done *right* now.  Because I am super crazy (obviously), I decided that I would handmake 70% of my gifts this Christmas, all the while knowing full well I would be recovering from wisdom teeth extraction.

So the actual wisdom teeth procedure went fine, as I have told you all already, but unfortunately some "tooth bits" were left in my upper left wisdom tooth cavity (this happens often enough that it isn't a big deal) and they have to. work. themselves. out.  WORK. THEMSELVES. OUT.  Read that as:

"Oh my God, it feels like a dagger is attacking my gumline and my cheek."

"Why aren't there more painkillers over the counter?"

And of course she did what she needed to and now I feel marginally better, but I am irritated at myself for not calling her two days ago.  Sigh.  Stupid stubborn streak.

Anyhow, because I have zero energy, but figure I should let you all know that...

Onto a secret, and I really hope Boden fans are reading this, 'cause this is good...

Boden has allowed some of us to pre-order from the Boden clearance sale this weekend.  I noticed that the Boden Preview site was down for maintenance yesterday and thought, "hmm, that's odd."  Turns out they have the sale section there, with the great prices ready to go, and you can preorder.  At least I could.  Now, I received an e-mail that stated it was for my eyes only, but it seems that we should all be able to do it, so long as we have a Boden account, right?  Would one of you who did not get the e-mail try it and let me know so we can officially confirm that we can do this?

UPDATE (10:13 pm): Stephanie has confirmed that only us with the official e-mail are able to access the early sale.  She says:

it wouldn't let me on the preview sale site, i randomly found it earlier today and when i tried to log in it said i wasn't on the list to get it :( very sad.

Thanks for letting us know, Stephanie.  Agreed.  :-(

About the above, I commented this back to Stephanie:

I certainly can't go over the whole list of items, but I will say that if you like something that is popular, it appears that it is only reduced between 10% to 20% off. If the item is unpopular, there a whole lot of 40% to 60% off items. :)

Maybe this can help you all a little bit?

I decided to throw this info in here because I don't really know if I am allowed to tell you all, and would hate to find out I screwed up.  Heck, I might get in some trouble, but the percocet is making me all sorts of wild and daring.  ;-) 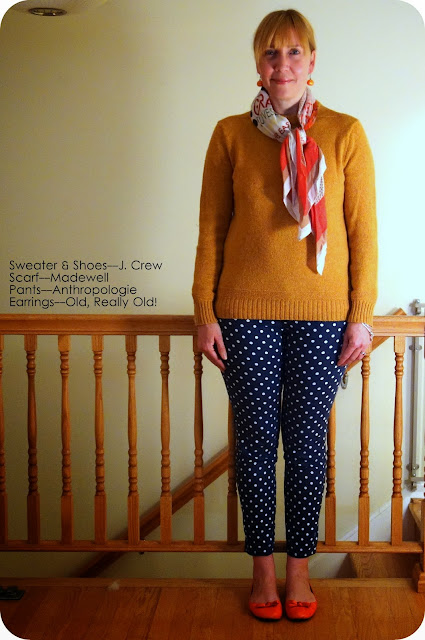 I had spent most of that day creating CW's Glinda costume.  I was spent by the time trick or treating came.  I figured the orange sweater, shoes, and pumpkin earrings was definitely festive enough.

I could have gone as Glinda my own self, but eh, maybe next year.  ;-) 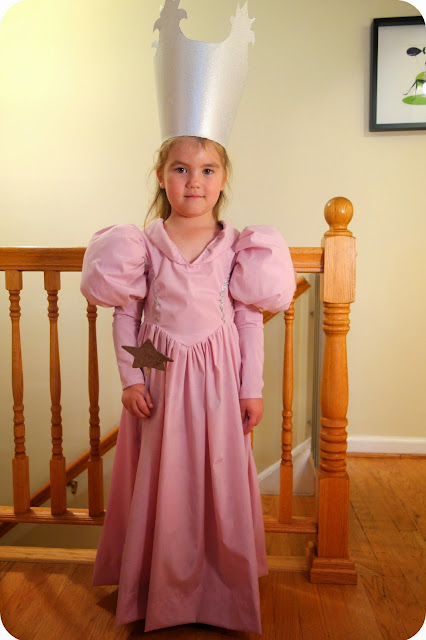 So this Glinda costume basically exacted the same amount of time and energy as CW's Rapunzel costume did.  In other words, WAY too long.  And then of course I jumped into the Vogue Paris Original dress right after that, so I guess I should just accept I like a challenge.  My stepmom thinks now that I have made three insane outfits, I should attempt a jacket or coat.  And of course I was all, "yeah, let's do that."  Let me sleep straight for three months first, though.

(The Christmas presents I am making are far easier than any of these dresses, a bunch of pretty infinity scarves, some tote bags, a few stuffed animals, a few *simple* dresses and jackets, and a pillowcase.)

This dress is made from Simplicity 4139 ( here

) and is a pretty close replication of what Glinda looks like in the movie.  (The original movie, not the most recent one.)  My daughter isn't an exact Billie Burke, but there is absolutely no mistaking who she is.  So mission accomplished, two ginormous "it looks like it can eat CW's head" puffy sleeves and all. 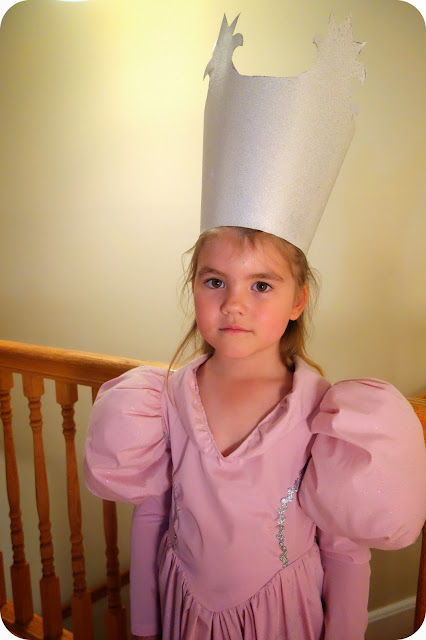 Most of the dress gave me little challenge.  In fact, this material is a plastic nylon fabric of some sort, probably meant for rain jackets, that I got at G Street fabrics at one of their "$2.97" tables.  It wasn't terrible to sew, it made a funny sucking kind of sound as I sewed it, but I loved that I didn't have to finish off the seams to prevent fraying fabric (plastic doesn't fray, hey!).

What ended up getting to me was the stinking sleeves since although they look fully puffy and definitely "good witch,' they are not evenly placed in the armhole and that irritates me.  No one else probably even notices, but after watching "Breaking the Faith" on TLC and seeing all the FLDS and their perfectly formed puffy sleeves, I just know I could have done better.  I did puff out her sleeves with the help of poly-fill.  That stuff is really great for more than just stuffing stuffed animals.

I also hated the princess seams (they are covered by the silver rick rack to make up for the horrible job I did on sewing them).  Apparently you are supposed to ease the seam before you sew it (basically cutting it to fit the curve on the other piece).  I didn't know that and desperately wondered how I was supposed to fit them together.  By the back, I had figured it out, but the front was a mess.  So yay silver rick rack, I appreciate your hiding powers.

I did like that I chose to use a very sheer sparkly tulle over the puffy sleeves and collar, and a very light application of silver fabric spray on the skirt.  She literally shined as she moved.  It's pretty darn magical. 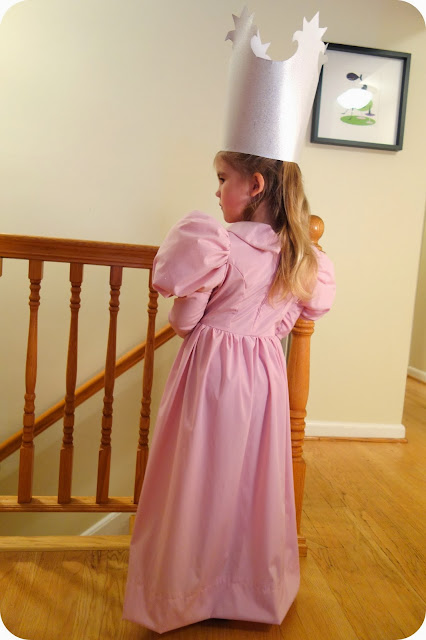 I think the back looks way better than the front.

I also made the crown from posterboard, also sprayed with the silver fabric spray.  The crown is destroyed now, though, sigh.  Kids!  ;-) 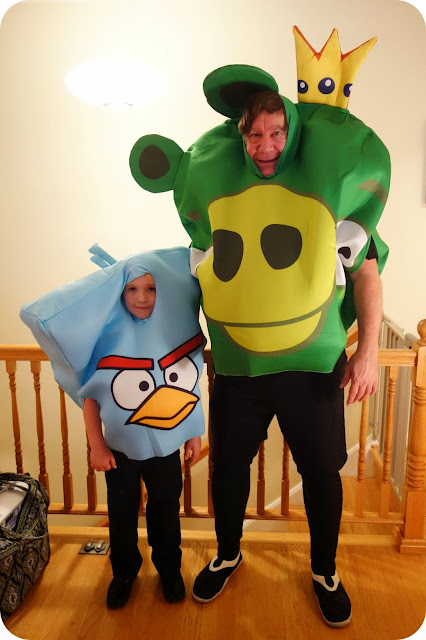 My dad and my son's Angry Birds costumes also needed some polyfill.  Good thing I had some, just hanging out, huh? 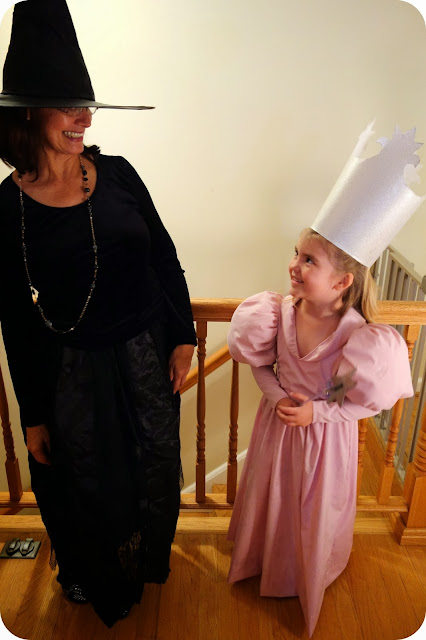 My stepmom wanted to match CW, so she dressed as the Wicked Witch of the West.  CW was sad to hear that the wicked witch was not supposed to be her friend.  She almost cried, in fact.  We changed the story just a touch to make her feel better. 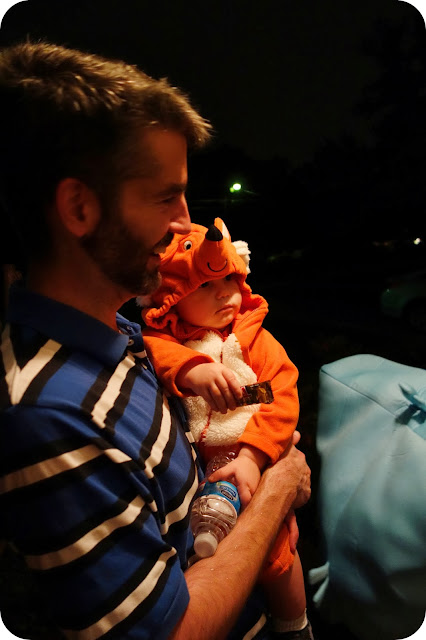 And there is our lone fox.  I bought that for Tiny at Carters in September, and he has actually worn it as a coat a handful of times since then.  He gets a lot of smiles, and yep, a lot of "what does the fox say?"  Ha.  He says "yip yip yip yip yip yip yip," of course.  (We have a few foxes in our forest behind the house, and I assure you foxes sound weird and deranged.  Turns out that angry zebras do, too.  Yeah, that's right, I have heard an angry zebra!)

Okay, that's it for now.  Remember to try the Boden preview site (sign into your account first!) and let me know if you can access the sale.  Also, if you see something that goes UP in price at the clearance time, definitely better to buy now.

The coupon link below says it's expired, even though the affiliate program says it is good until tonight.  The link barely matters since the prices are all around 25% off, and lolcatgirl has let us know that you can use the code Z2H4 for free shipping.  If I get a new promo, I will update this post and my sidebar! 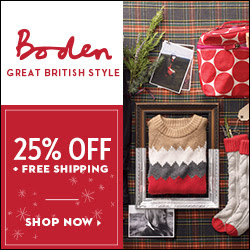 Posted by dinagideon at 9:58 PM