Boden: 20% Off Selected Items, Including Some New Summer Arrivals.

Hey, all.  So I didn't know it this morning, or I would have posted in my first post of the day, but Boden is offering 20% off selected items, including quite a few from the new summer arrivals.  (Not the ones I want, but still.  Ha.)

Anyhow, for some of you this may be the extra % off that you wanted to go and enjoy some of the current line offerings.  The 15% coupon in my sidebar and the bottom of this post do not work in conjunction with the 20% off (drat!), but if you want to sneak in another item that isn't on promo, it will work for those.  I don't know when this promo expires, but when I find out I will update the post.  I will also attempt to get a list of current 20% off items in a special sale review post so you can see what I think about certain items that I own (or have sent back, depending).

I have no idea about some of these new summer arrivals, though, BECAUSE Boden, once again, has severely screwed up my preview order.  Like in the past, Boden has put holds on monies in my account (this time on a credit card with a very low credit line, thank goodness, and not a bank account's overdraft) which made my card company balk and say "no way, Jose."  I swear, I don't get it.  And based on a few emails I have received from blog friends, I am in no way alone in what's going on.  There are quite a few people out there that this is happening to, as well.  Unless I put my preview orders on my husband's card (with a higher limit), I consistently see issues with Boden.  I tell you, nearly every time I receive a phone call saying the credit card company won't authorize my purchase because the double holds (so weird, basically items are charged twice while in the pending status because they are shipped from two separate facilities) push me over my (self-imposed) low credit limit.  Sigh.

So I have declared a breakup with the Boden preview.  From here on out, it is pretty items to look at in my "Preview Picks Post," which are some of my favorites to write, but no ordering in preview.  EVER AGAIN.

I went ahead and canceled quite a few of the orders, and was done, and washed my hands of the process.

THEN--I get a call and an email saying that I didn't pay for an item that had already shipped out from their warehouse.  First--why ship an item if I didn't pay, and second, with three seconds of sleuthing work at my credit card statement online, I did pay and it wasn't even in pending status, nope, "fully paid" status.  Dumb.  So of course I called them out on it, but said, "fine, I'll pay by paypal if I have to," as I don't want the headache of Boden collectors, but added, "if I find out that I have paid double for a couple of items that you say I didn't pay for, but I did, and TWICE, I will be sure to think about my future transactions with your company."  The items did arrive, and since the email have heard nothing from them about it, but to be safe, I have kept the items wrapped up (they are for my daughter), and am more than willing to send them back if need be.

Okay, rant over.  But obviously I am not alone, and while I still love their products and their style, I am getting very tired of things that I was having issues with years ago still being unresolved.  Ultimately they decide how they run things, but some of their customers do not have unlimited bank accounts and/or credit limits that allow for double charges just because Boden can properly process the orders the way. every. other. dang. company. out there can.  ;-)

(I also want to point out this was one of my smallest Boden preview orders ever, and had budgeted for the smaller amount.  Sigh.)

So from now on, it is ordering in regular season only.  I'll live without the extra 5% off and free returns to save myself the hassle of all of that above. 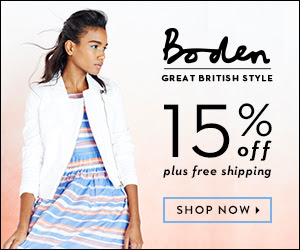 Posted by dinagideon at 3:51 PM