Been a bit behind in the ootd posting, so in an attempt to catch up will keep the copy brief and focus more on the photos.  If an item is still available, I will make mention of it, but in general, all of these items are older and definitely gone.  :-) 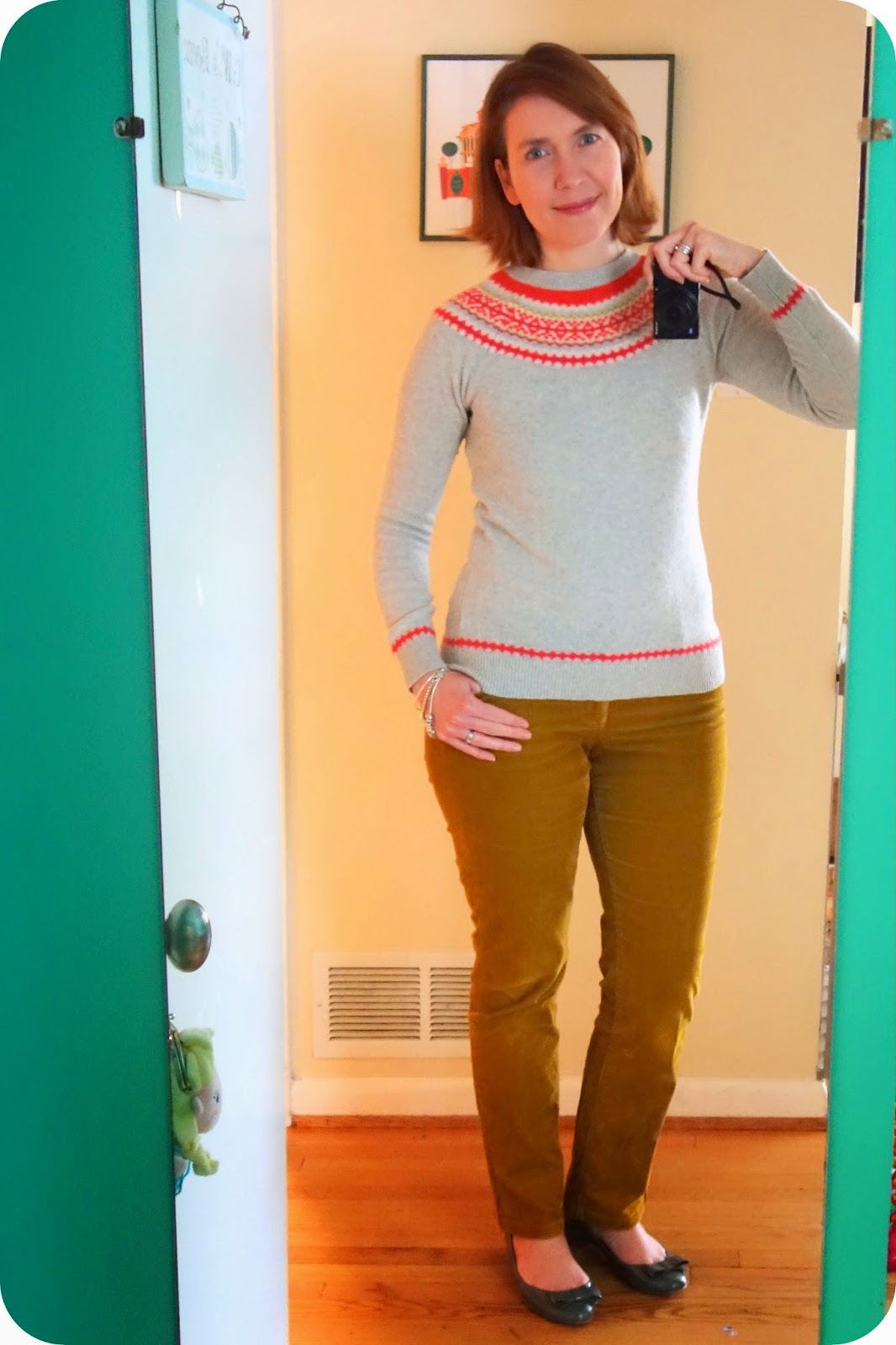 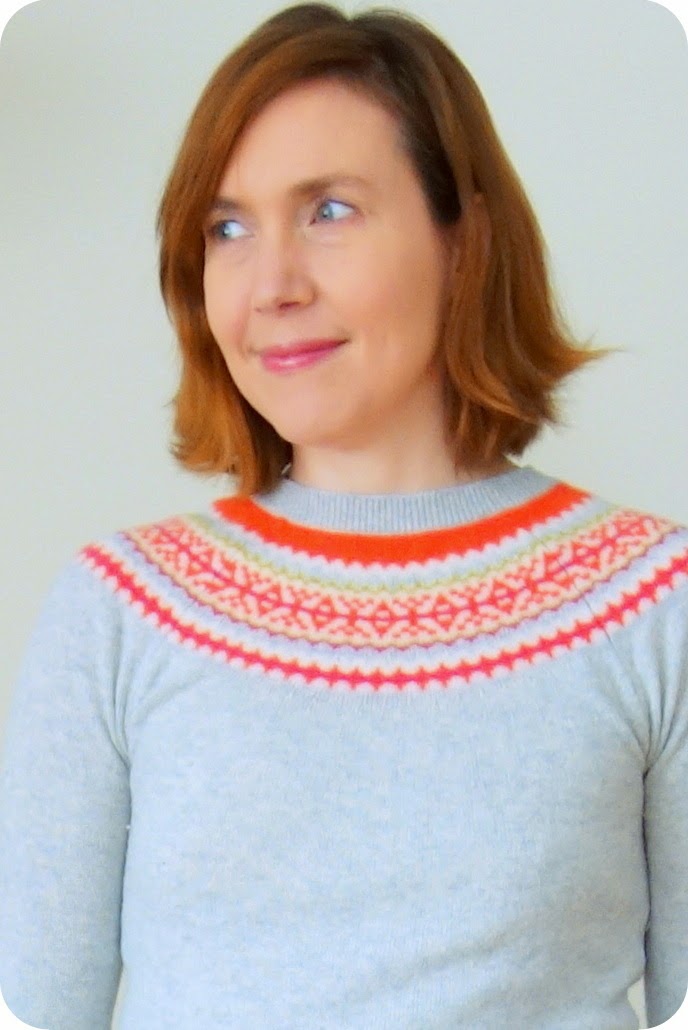 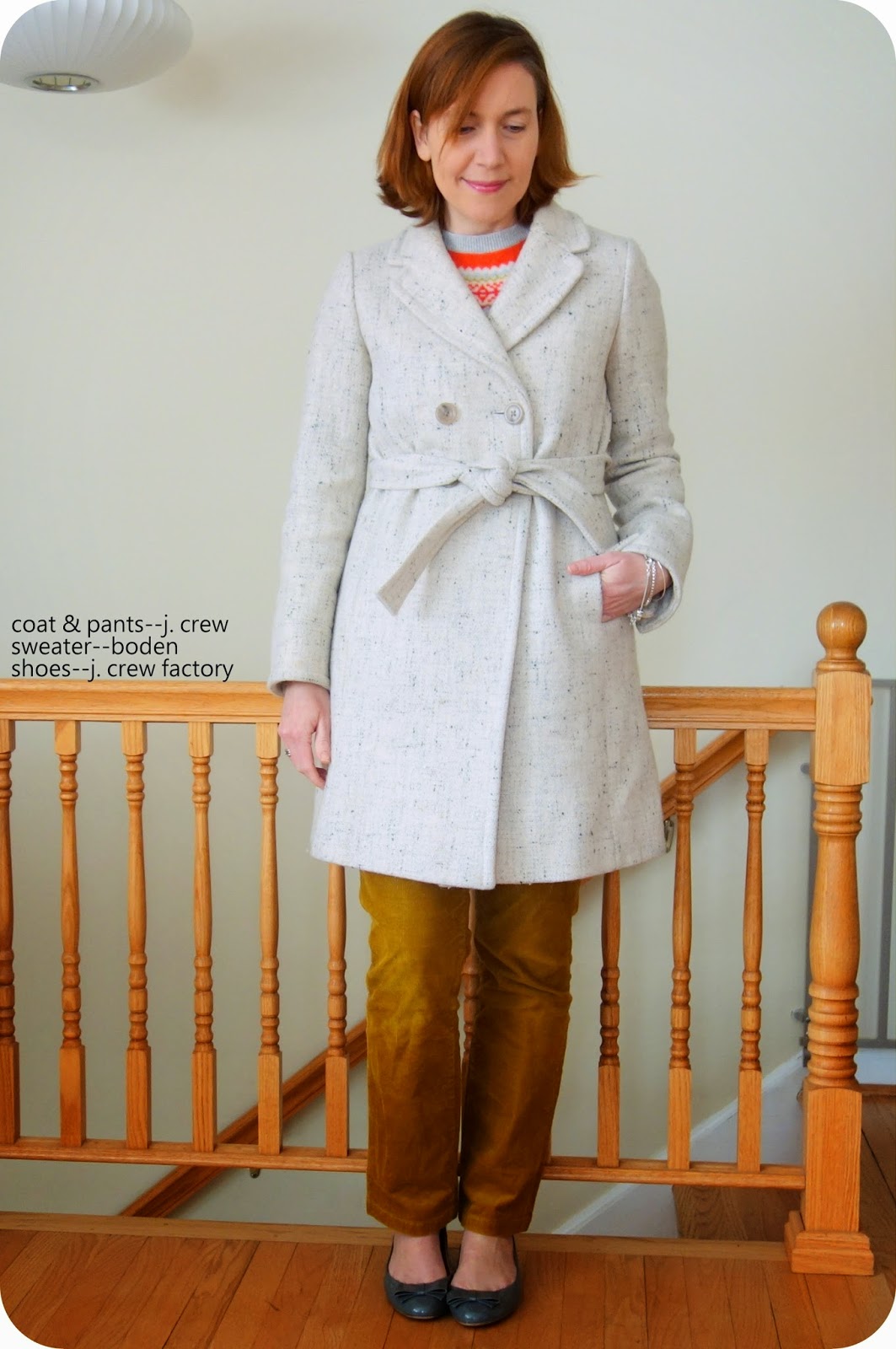 Outfit worn on March 3, 2015.  I went out that evening to G Street Fabrics with a friend after having some dinner with her.  I remember we were talking about the snowstorm that was set to come and wallop us a few days later (and it did, in epic form).

I wish my hair always looked like this.   Since I am not a stylist, I will just celebrate when the right combo happens.

None of the above is available, I have owned most of these for years, but the shoes can still be found at J. Crew Factory if you catch them on popback.  DO not pay $108 for them, though.  I got mine for under $40. 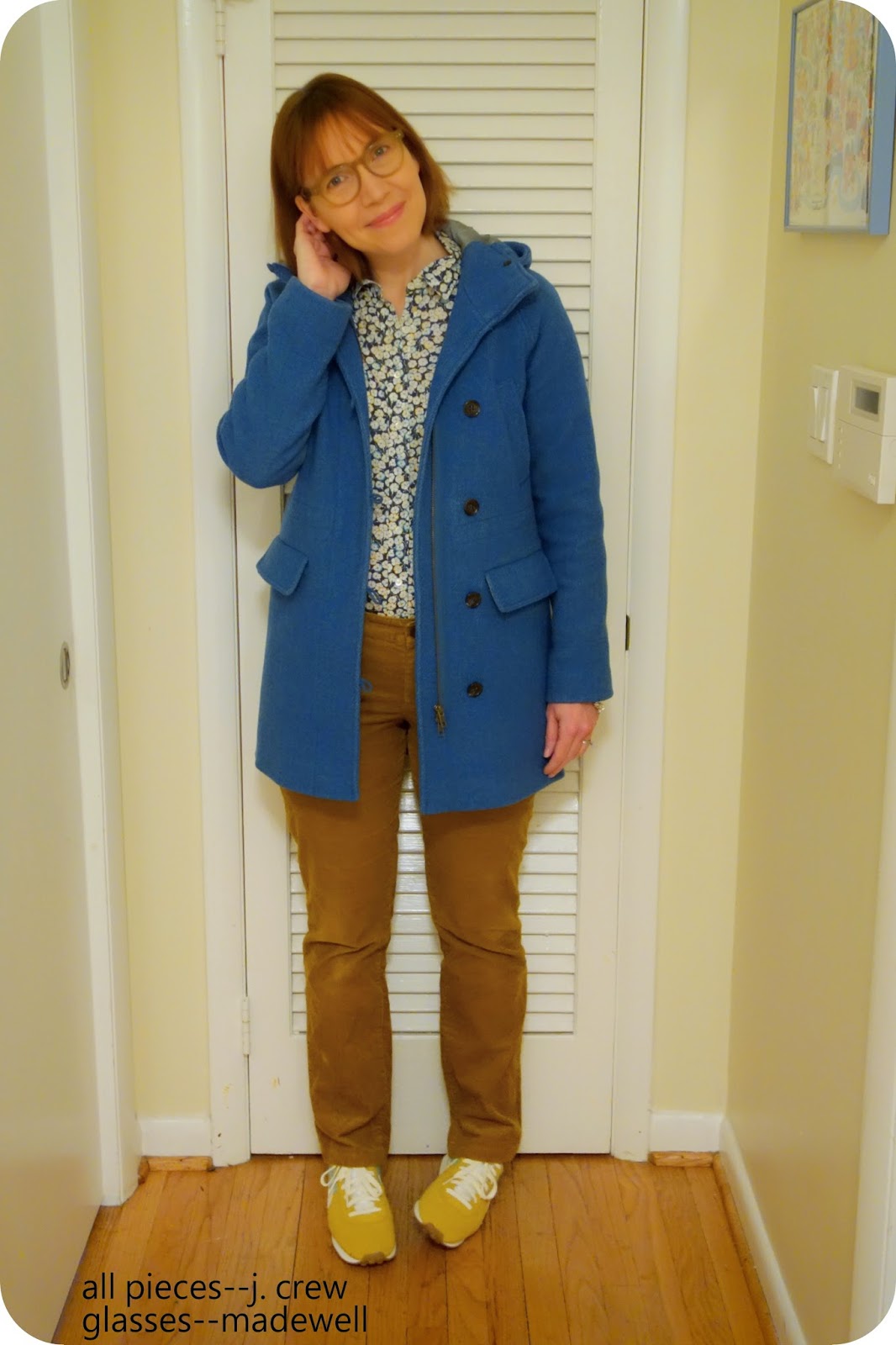 None of these are available, ancient clothing one and all (and clearly I love these corduroy pants).  There is a newer color of those Nikes available, in a grey, so much more of a neutral than my yellow pair.  :-) 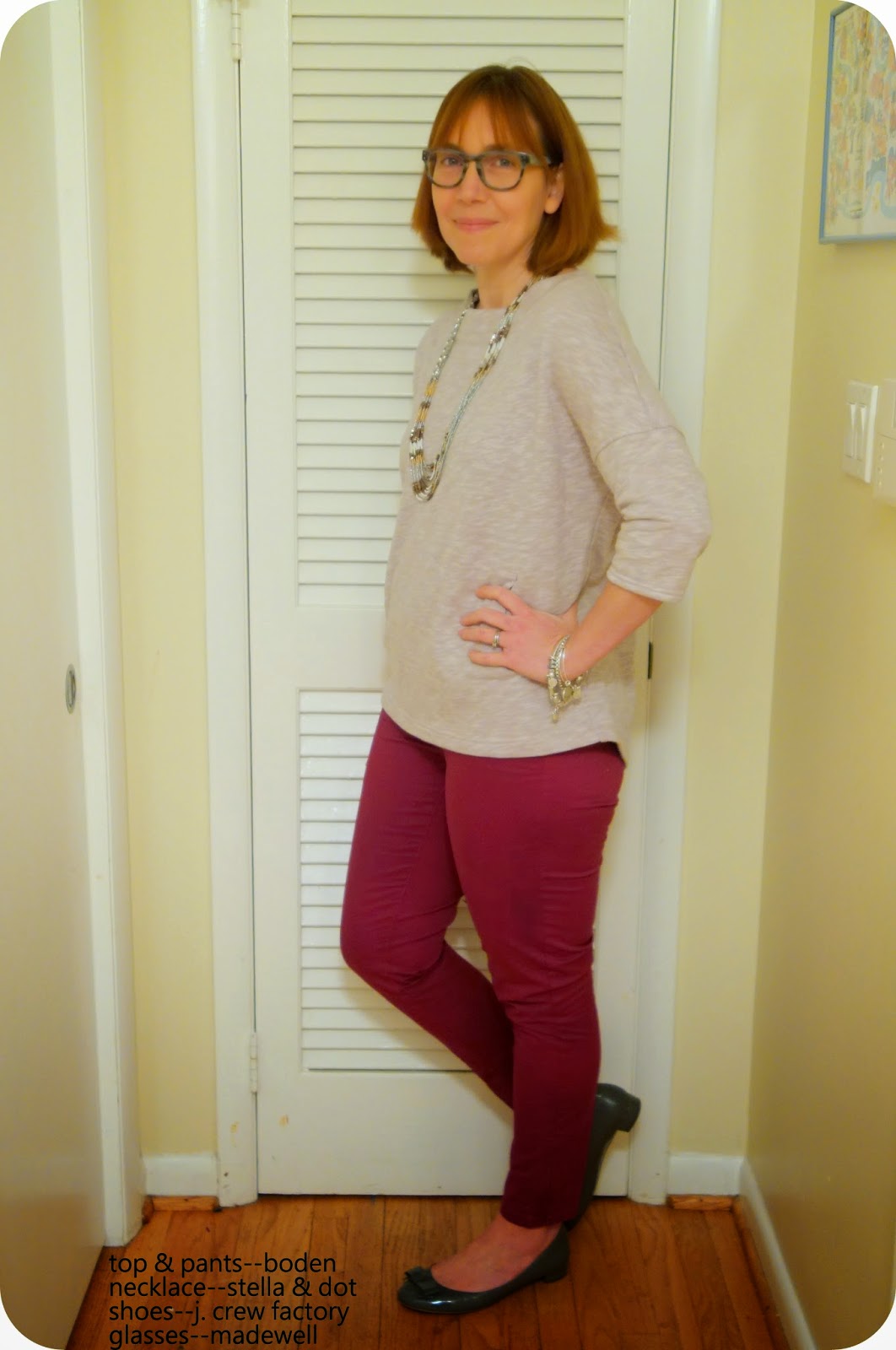 Worn February 2, 2015.  This is a Monday.  Rex was still injured, so I was home with him.  I did something that day, if it is just me at home and no place to go, I don't bother with necklaces.

(I just went to FB and found what I did that day--I met with the school and discovered that I would be homeschooling Rex for the foreseeable future.  No wonder I don't remember, I am trying to block the memory of that from my brain.  I mean I love Rex, and I love teaching, but together at home?  It's been a trial.)

The shoes are the same ones from the first outfit in this post.

The rest of the outfit is old, but I will point out that these are Lou's favorite pants from Boden, and when she saw them on me recently (in a photo on facebook), she asked if those were here favorite Boden trousers.  I happily declared that, "yes, indeed, they are." 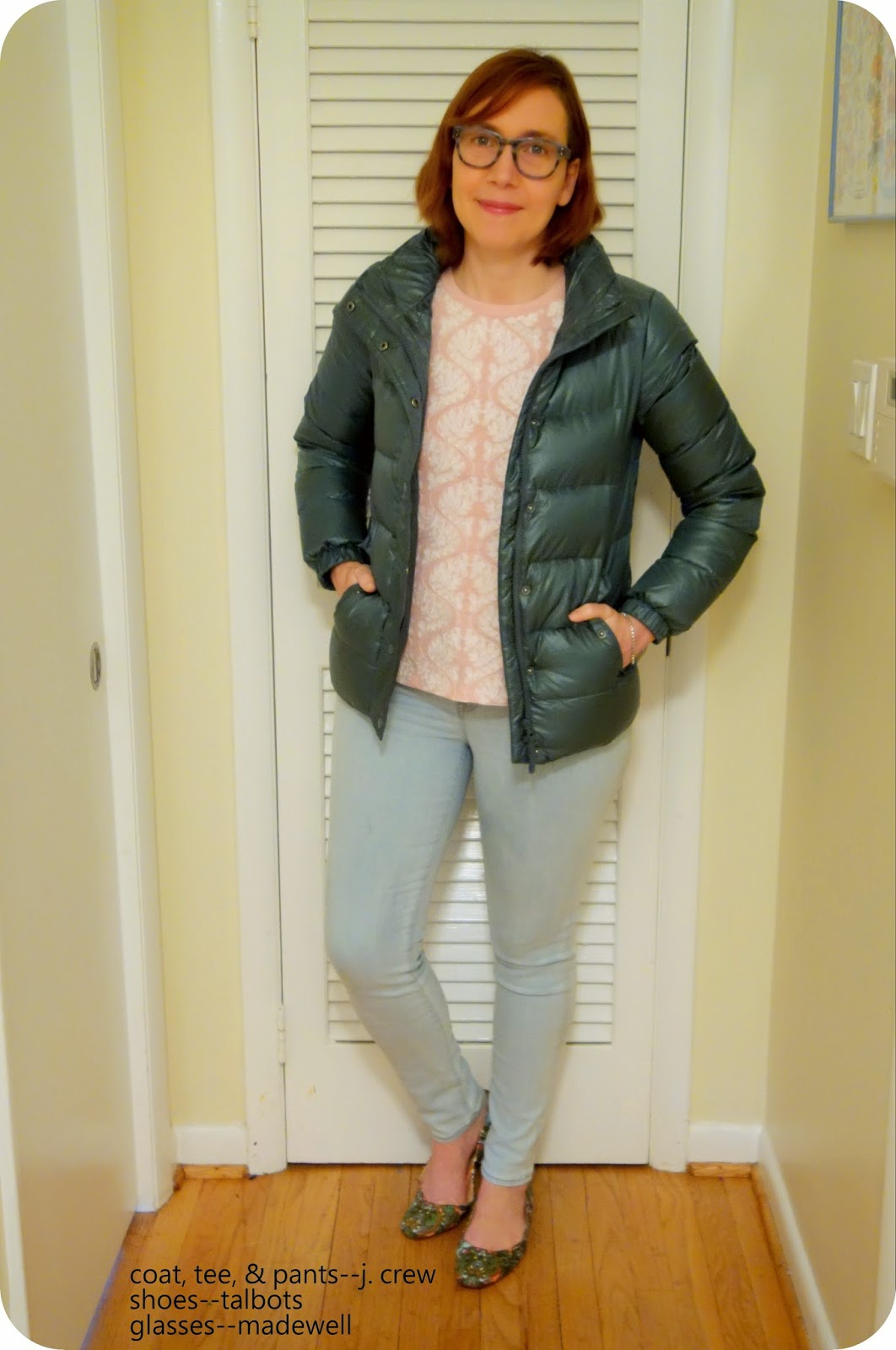 Worn on February 4, 2015.  Again, no clue what I was doing that day.  Still home with Rex.  Going somewhere as I have on the shiny puffer down jacket, which is available at J. Crew still, btw. 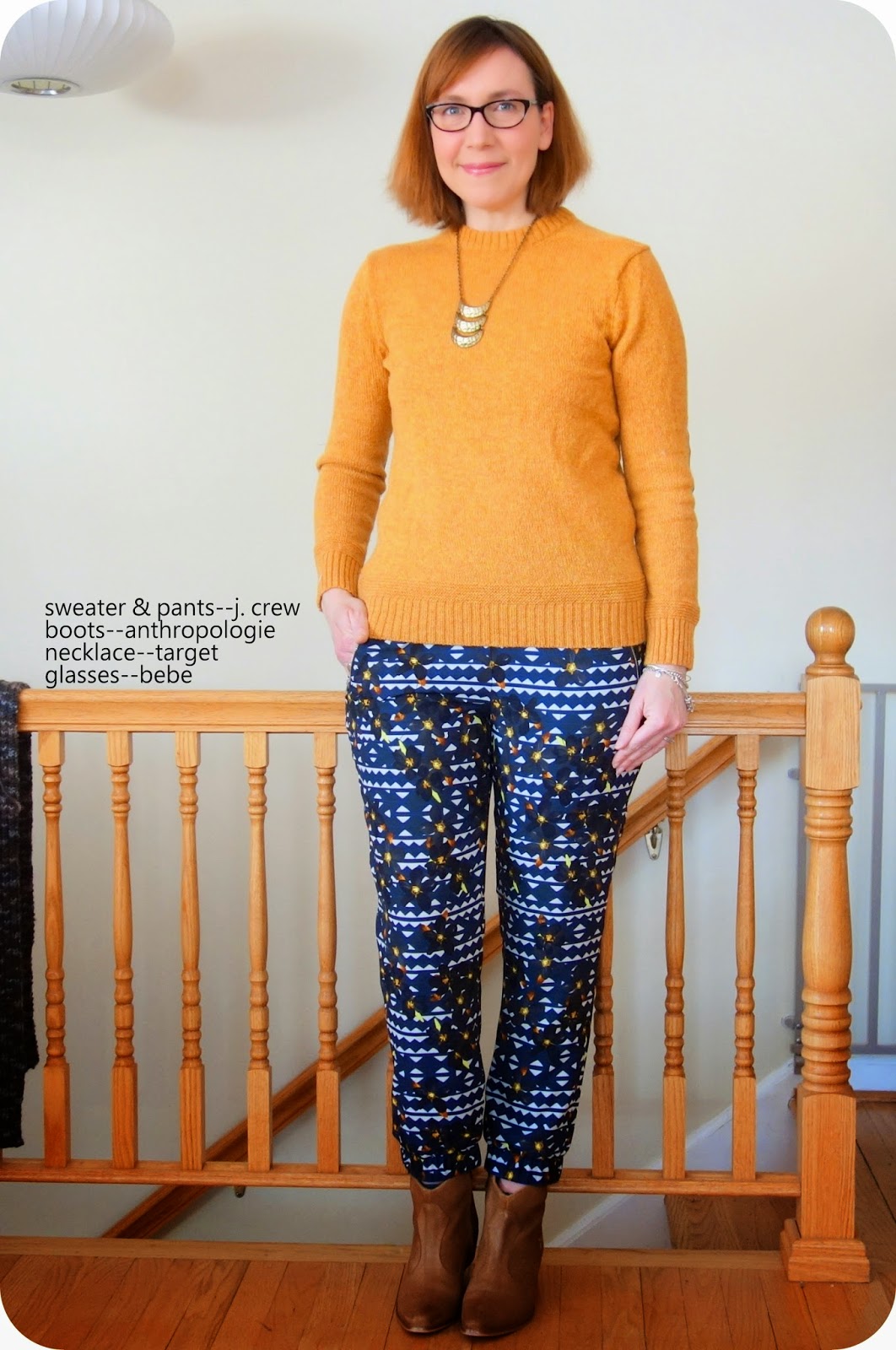 Worn on February 24, 2015.  It was a Tuesday and although I would normally be at bowling, that week I wasn't.  However, I did work on Rex's blazer that day, which I needed to finish by the 28th, so it is very possible I nixed bowling in favor of getting it done.

The Turner pants are definitely still available in the solid shades, though these weirdly printed versions are gone.  (I bought them after finding I loved the Turner pant silhouette and these were only $25 or so.) 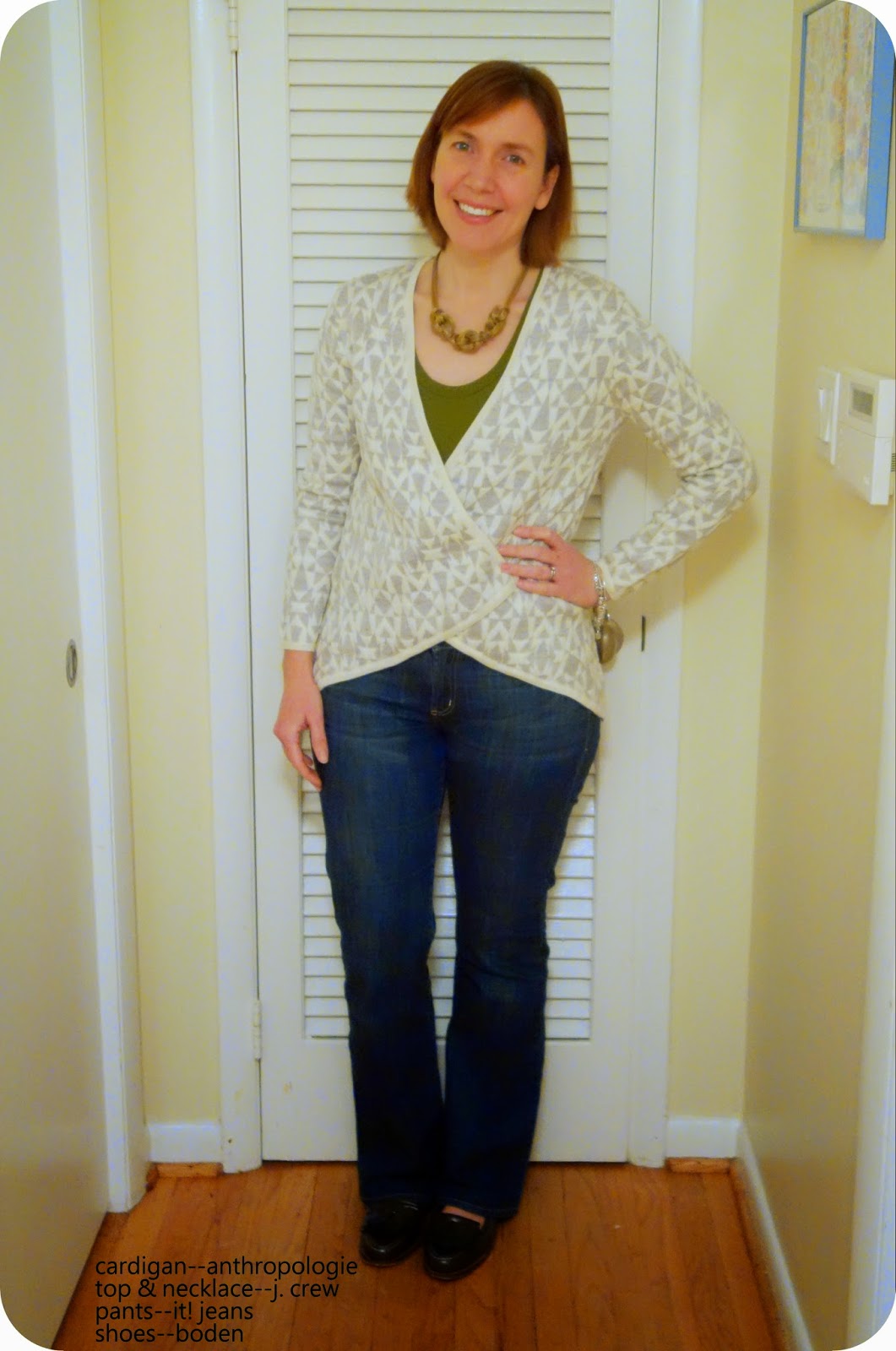 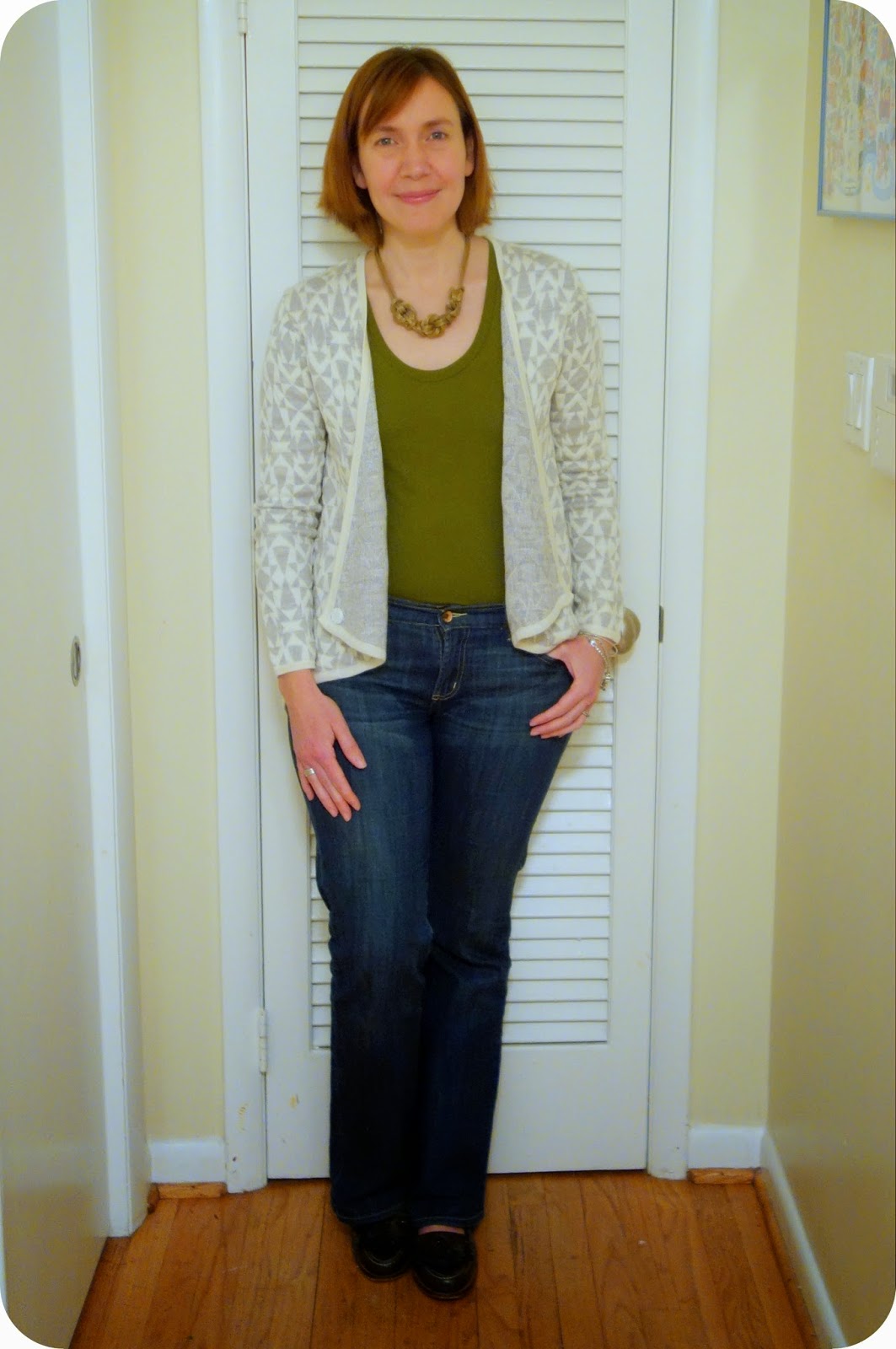 I wore this on January 3, 2015.  It was a Saturday.  I have on a necklace, so going somewhere.  LOL.  I love this cardigan from Anthropologie, it is called Jacquard Sweater Blazer, and like most items that I love from Anthropologie, is from the brand Moth.  It is not around, but the fact that it still has a page at Anthro means there are pobacks every once in a while.

Those jeans, btw, are so old, I have had them since 2003, and I will one day clone them into a pattern so I can so up additional pairs for me to wear, they are that comfortable.

Okay, that's all for now, I hope everyone is having a wonderful Monday!
Posted by dinagideon at 11:21 AM