Before I start, I wanted you all to know that if you use the code W4U4 to receive 30% off everything full-priced at Boden until midnight tonight.  I saw this yesterday in my email, but since yesterday was spent doing everything except being on the computer, I couldn't let you all know until today.  :-)  I apologize if you see this on Monday morning and missed the promotion, but Boden called it a weekend only special.

So, Happy Father's Day!  We don't have a ton of plans, but I am planning on sewing up my hubby a Hawaiian shirt made from this Michael Miller Fabric soon.  I will definitely post those photos when I get a chance.

Because it is Father's Day and I am working with borrowed time, I am going to show off the outfits but only use the date, where worn, and the anecdote of the day to describe the outfits, and not include the "ease of wear" or "coolness" ratings.  I will also include a link to the post on the handmade item for reference's sake. 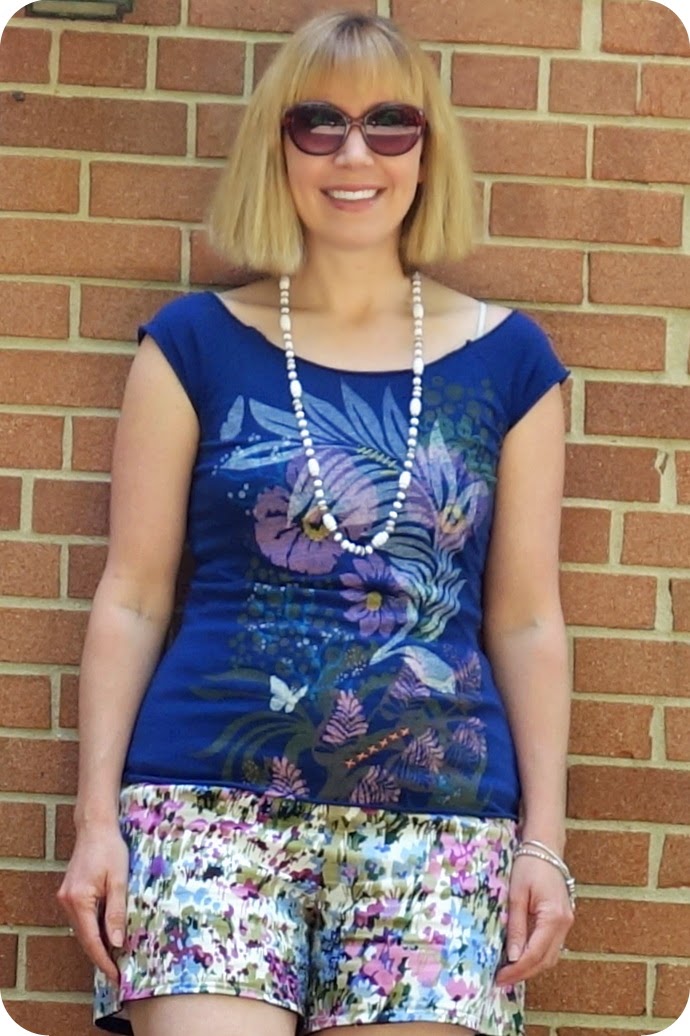 Anecdote from the Day:  Instead of hosting a regular baseball practice with kids doing regular exercises and drills, the coaches decided to have a parents/kids scrimmage game.  My hubby is not known for his athleticism, so he made me play while he took Angus and CW to the Little Gym.  Ha.  I was only as great as I could be at my age, but at least I enjoy playing the sport, I suppose.  ;-) 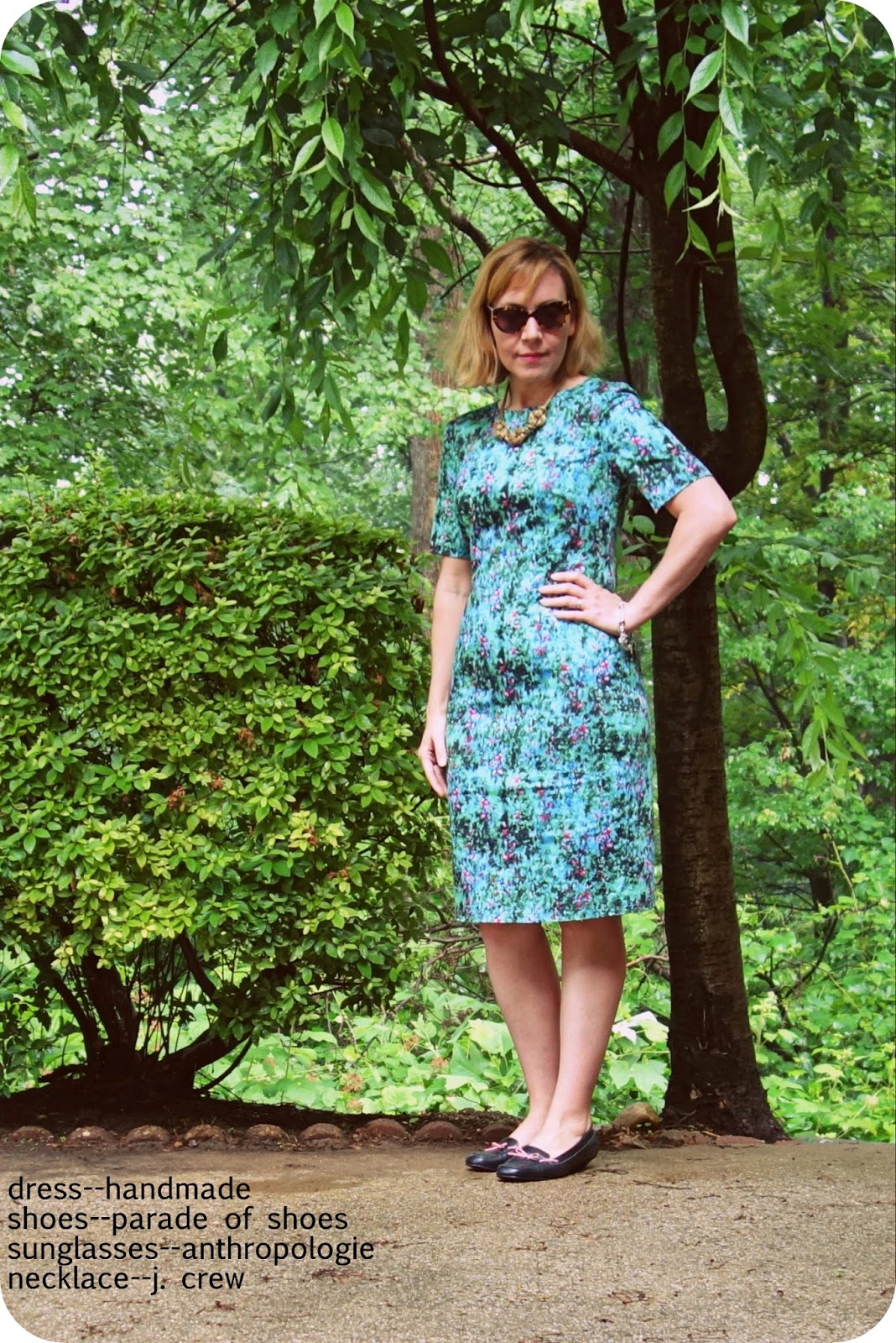 Anecdote from the Day:  I realized partway through the day that the dress hem was not completely staying up.  The stitches at the hem were fine, but I hadn't stitched far enough up on the hem to keep the part not stitched from falling over the rest of the hem.  Sigh.  Newbie mistake.  Definitely will be correcting that, and soon.

I was told by one of the teachers there at the school, who also is a seamstress, that my darts looked spot on and perfect, so that made me smile.  :-) 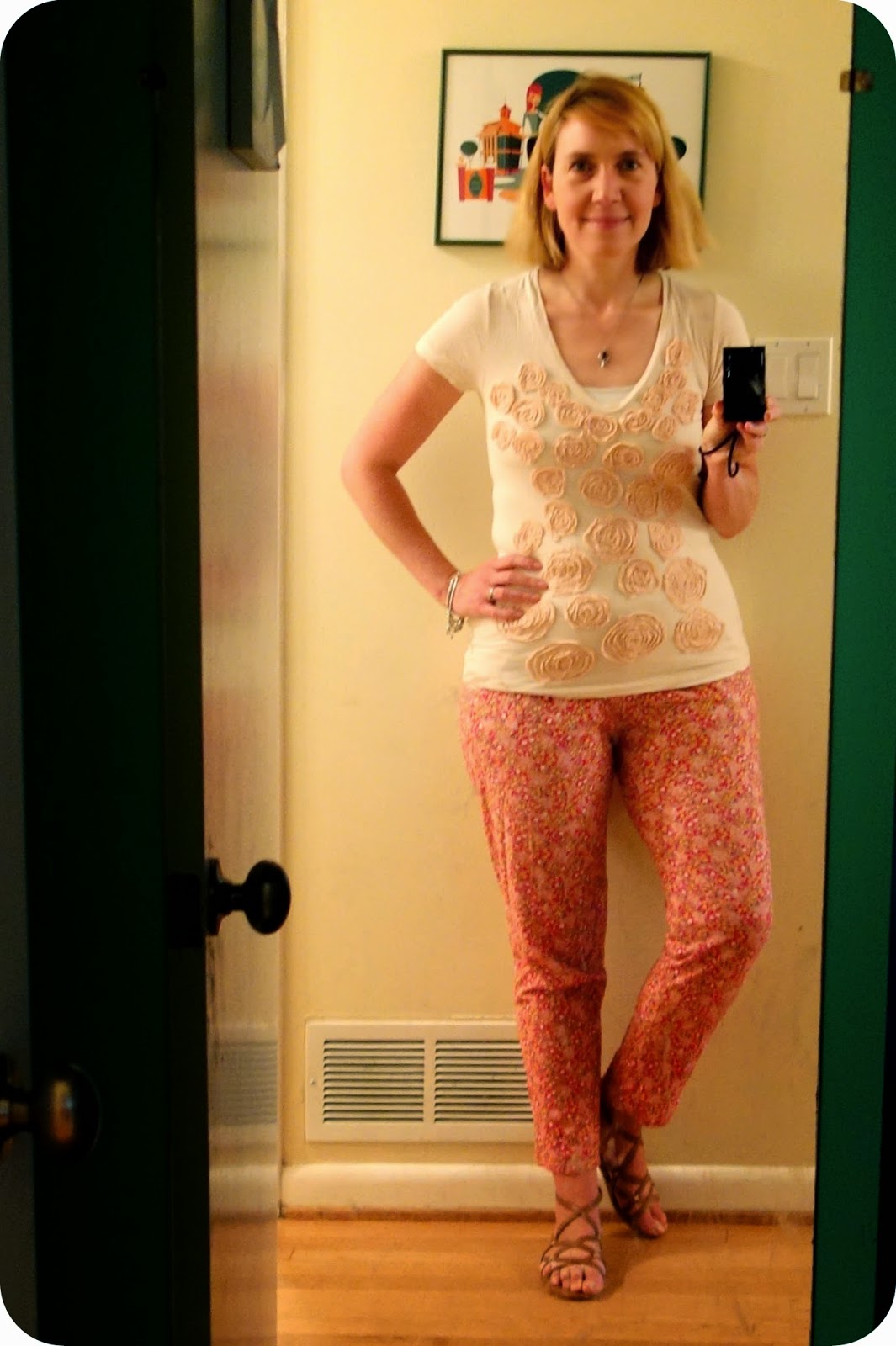 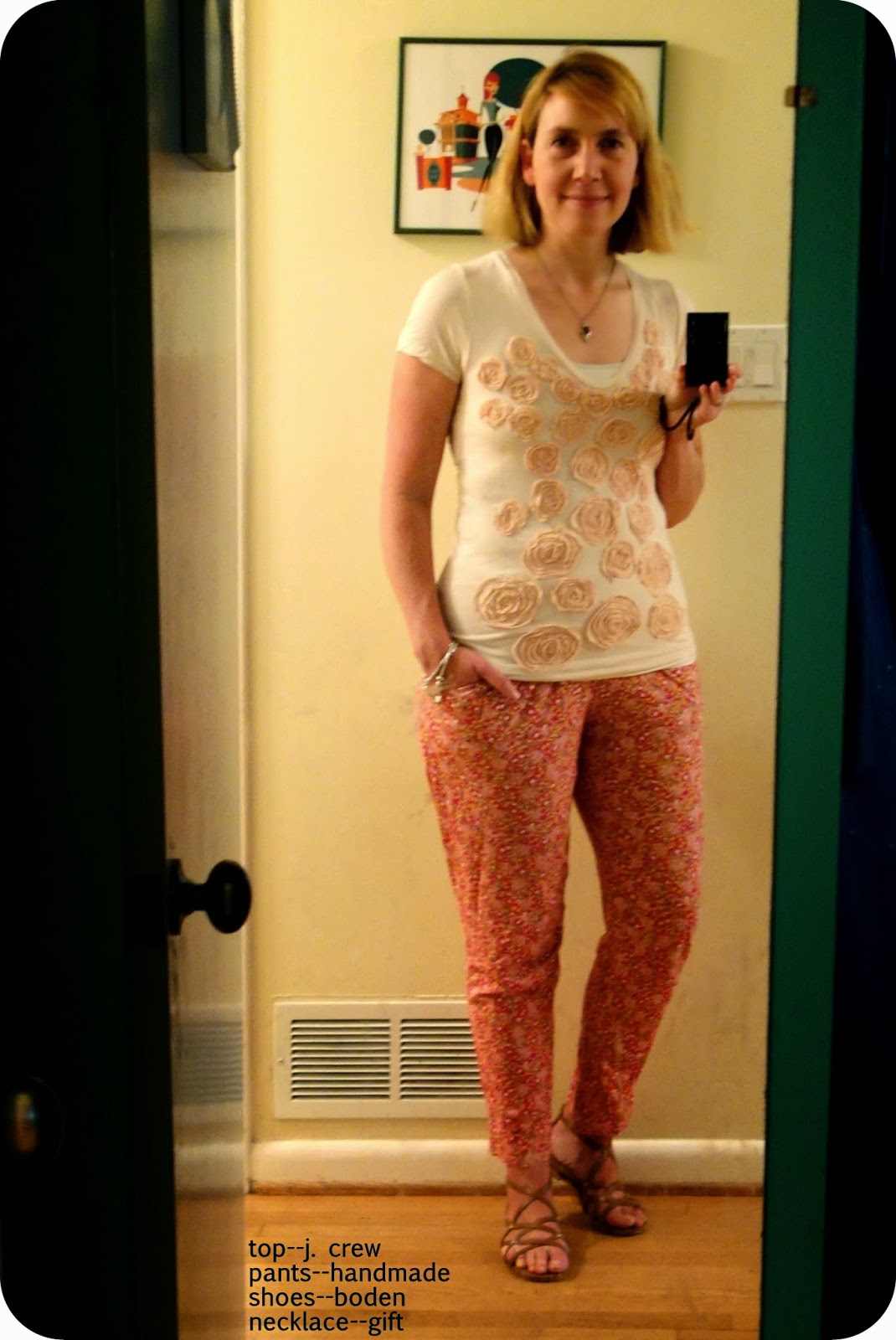 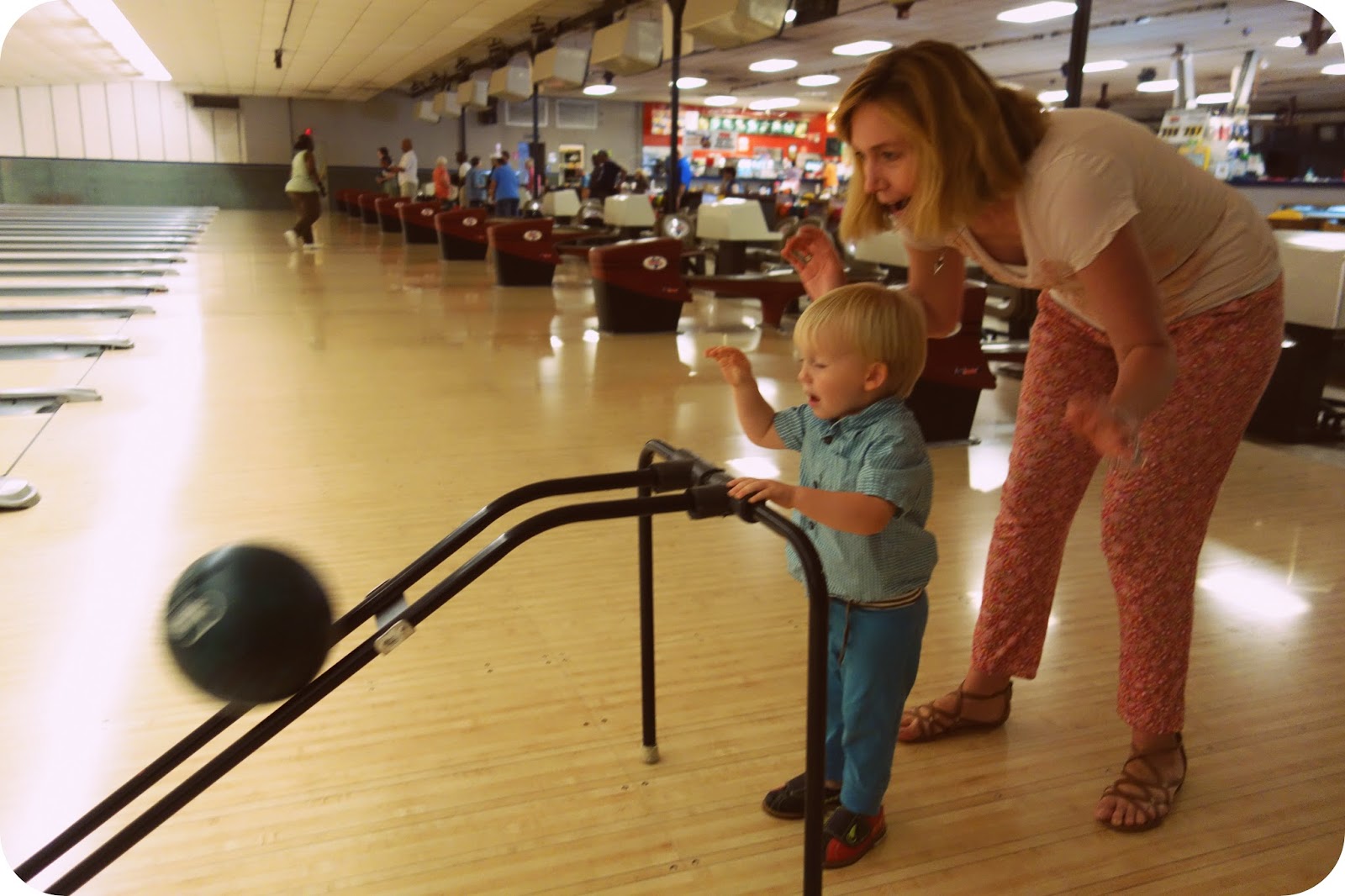 Where: Bowling with the kids.

Anecdote from the Day:  After ages and ages of begging me to let him bowl, Angus got his chance to try it out for himself.  Above you will see his first ever push of the bowling ball.  He didn't take to well to waiting for his turn, so in the end, we just let him have his own lane where I pretty much stayed by his side assisting him in getting the ball on the ramp.  (And also to prevent him from pushing it before the pins had "fixed" themselves at the end of the lane.)  He did REALLY well, considering his age, but sadly, I couldn't bowl, and I could barely hang out with the friends who came to the alley with me.  At lunch we were able to catch up, but Angus would look back at the lanes and sort of get a "why am I here eating when I could be bowling" look on his face.  Oh, dear.  I think I know what my future holds. 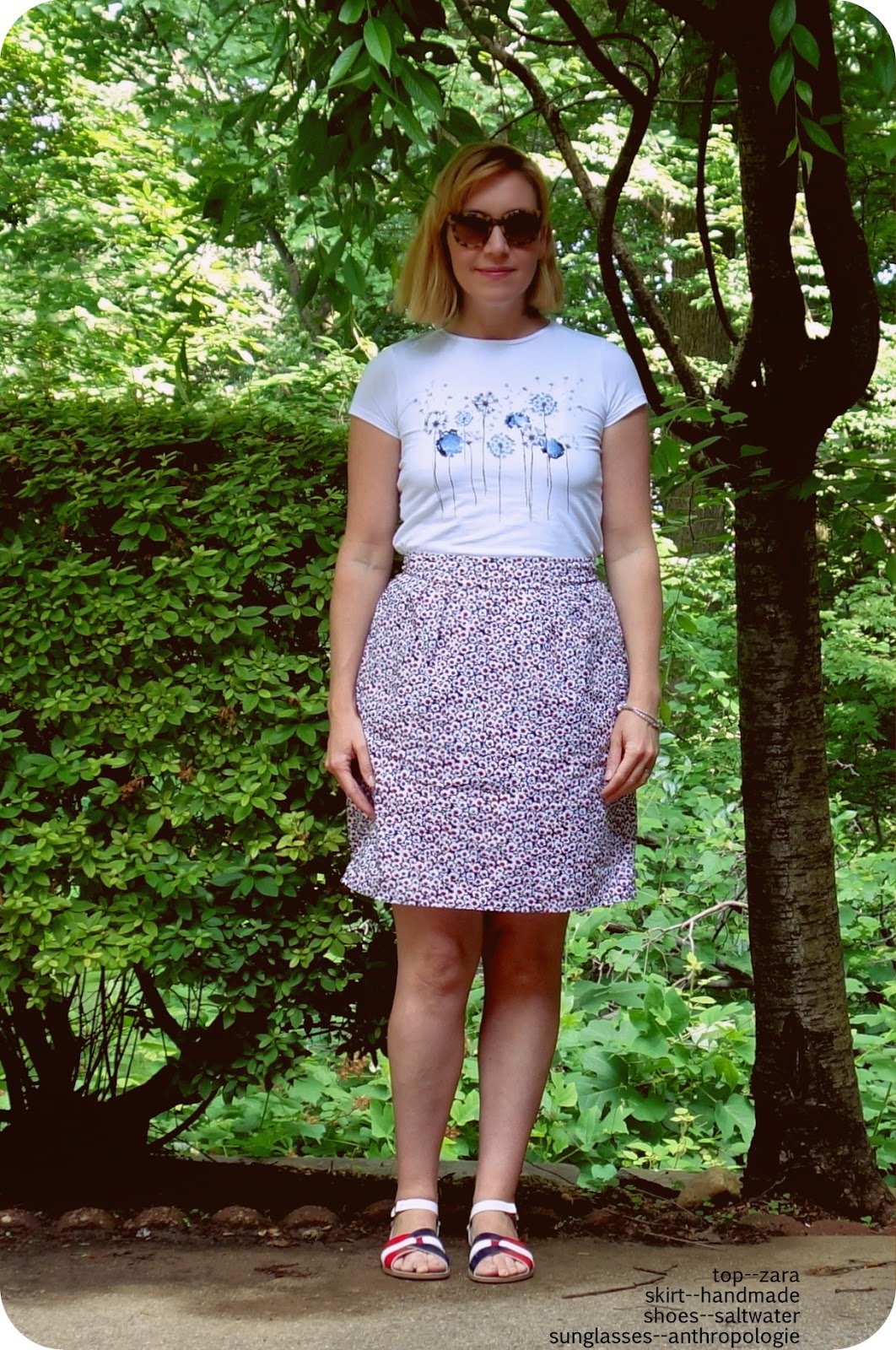 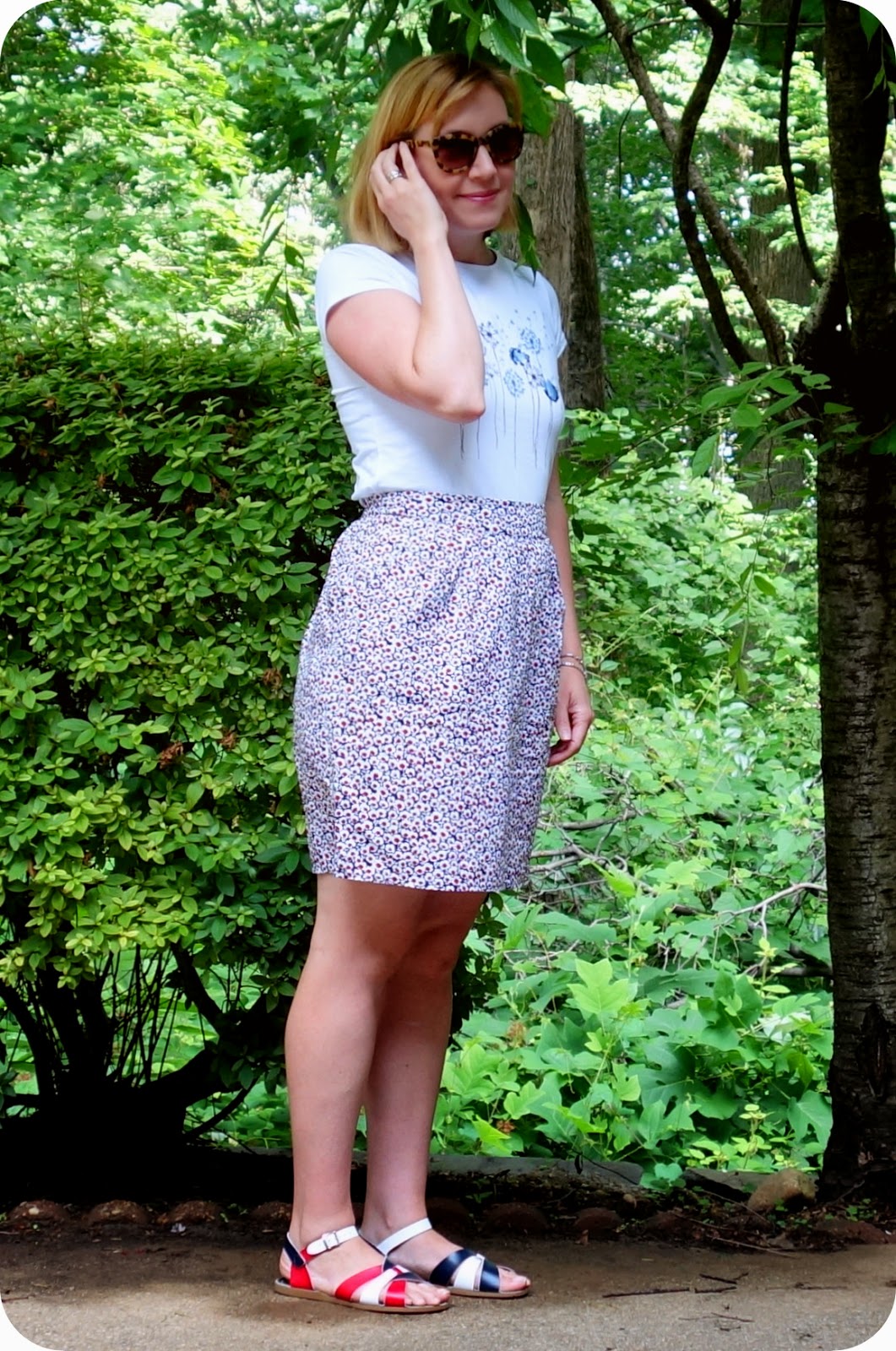 Anecdote from the Day:  Since there is no extended day at the school on the last day of school, every single parent who has to get their children that normally don't were there.  Sigh.  It was a freaking madhouse in the parking lot, out onto the side street, and even threatening to force its way onto one of the MAIN streets.  Not good.  I mean I get it, and I have zero problem with the parents getting their kids, but seriously, there has to be a better solution.  It would truly suck to have one of the parents get hit on the main road because they are caught in a horrible traffic situation.  Yuck.  Hopefully next year they fix that issue. 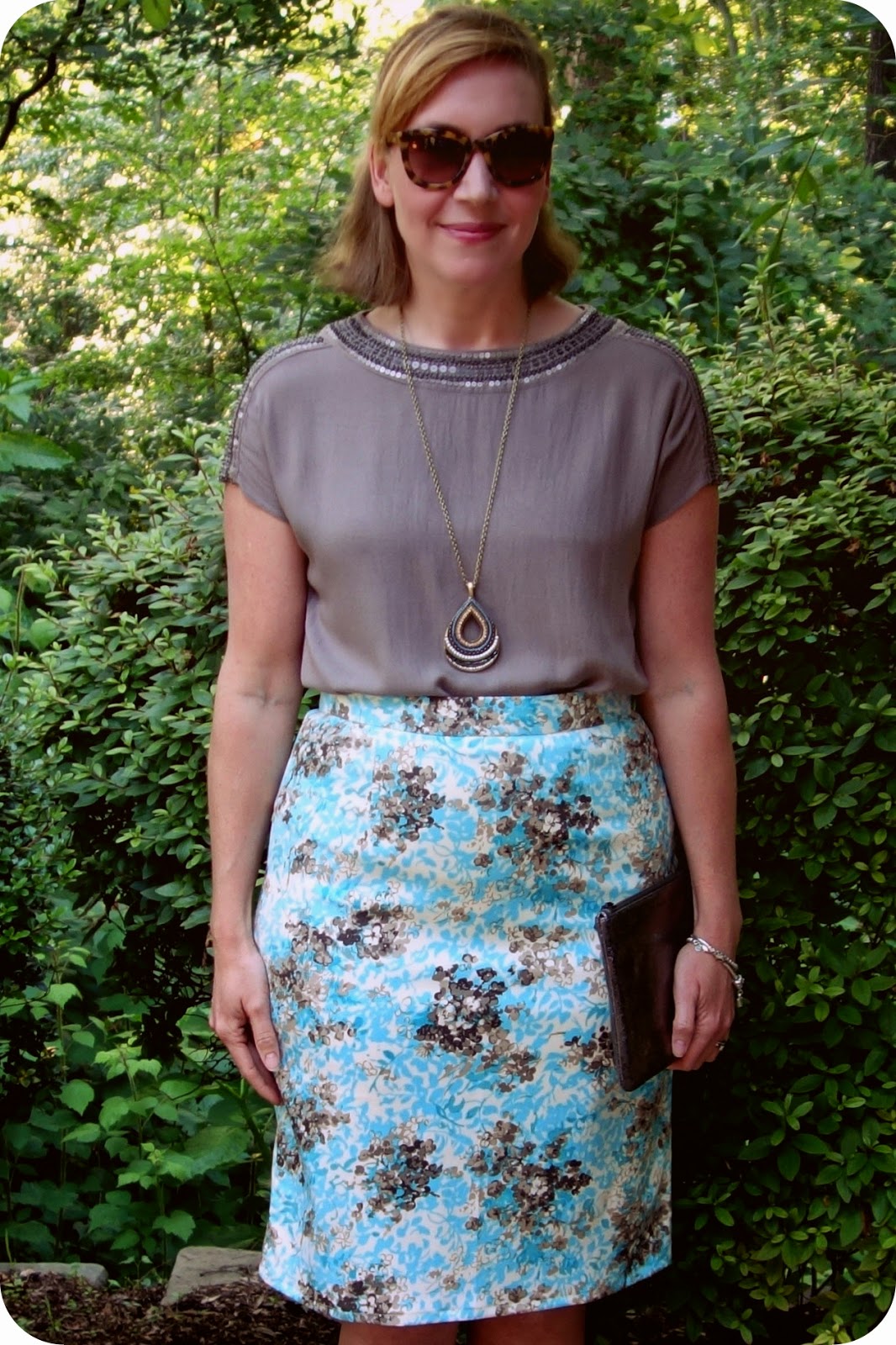 And now for a little sneak peek, the skirt that I made recently and wore last night.  Isn't it a pretty pencil skirt?  I fell madly in love with this fabric at G Street Fabrics, but found the price at the time to be too steep to buy it, but later saw the very same fabric for FAR LESS at one of the online shops, so I bought quite a few yards of it, since I knew I would want to try it in different garments.  The pencil skirt, based off this Vogue pattern, fit the bill for a relatively easy first pattern to try with it.  Anyhow, I will blog about this creation and another one in the next few days.

Alright, that's it for today.  You all have a very Happy Father's Day!

Remember W4U4 to receive 30% off all full-priced merchandise at Boden (put the code in the shopping bag page to override the 25% off below):

Posted by dinagideon at 3:37 PM