Made by Me Files: McCall's 7000 (That Elsa Dress). Plus Great Sewing News!

I have been working hard this weekend on an Elsa Dress for CW for her 6th birthday, which is on September 18, 2014.  Last year I made her a Rapunzel dress, but last year I was able to work on that a couple of days before her birthday, but this year I had to get into action FAST because I found out on Thursday night that I was going to be one of the competitors in Fabric Mart's second Fashion Challenge.  There were eight of us chosen for a six-week competition, and to be quite honest with you, I wasn't expecting to be chosen.  I put my ring in the hat after a lot of thought about whether this would be the right time for me to join in, and even then, I was all, "ooh, I am not sure if I should do this!"  But in the end, I knew I needed this, and if they chose me, I knew I would definitely give it my all to be a great competitor.  Now all I need to do is do that--work hard to be the best sewer I can be during the challenges.

I have seen the work that those other seven ladies have done, and I am going to let you know that I am in awe of their abilities.  So I am going to have to work doubly hard to even have a chance!!!  But again, worth my energy!  Half the votes per week come from "actual voting" from fans of the look, and the other half of the votes are from the people in charge of the contest at Fabric Mart.  I will let you know each week when the voting opens if you feel so inclined to send a few votes my way!!!

Okay, so because most of my sewing time (starting this Friday) will be tied up in these challenges, I decided to get as much work done on my daughter's Elsa costume as I could.  I am nearly there, so I figured I could publish a few photos for those of you who are considering making an Elsa costume for some little lady in your life. 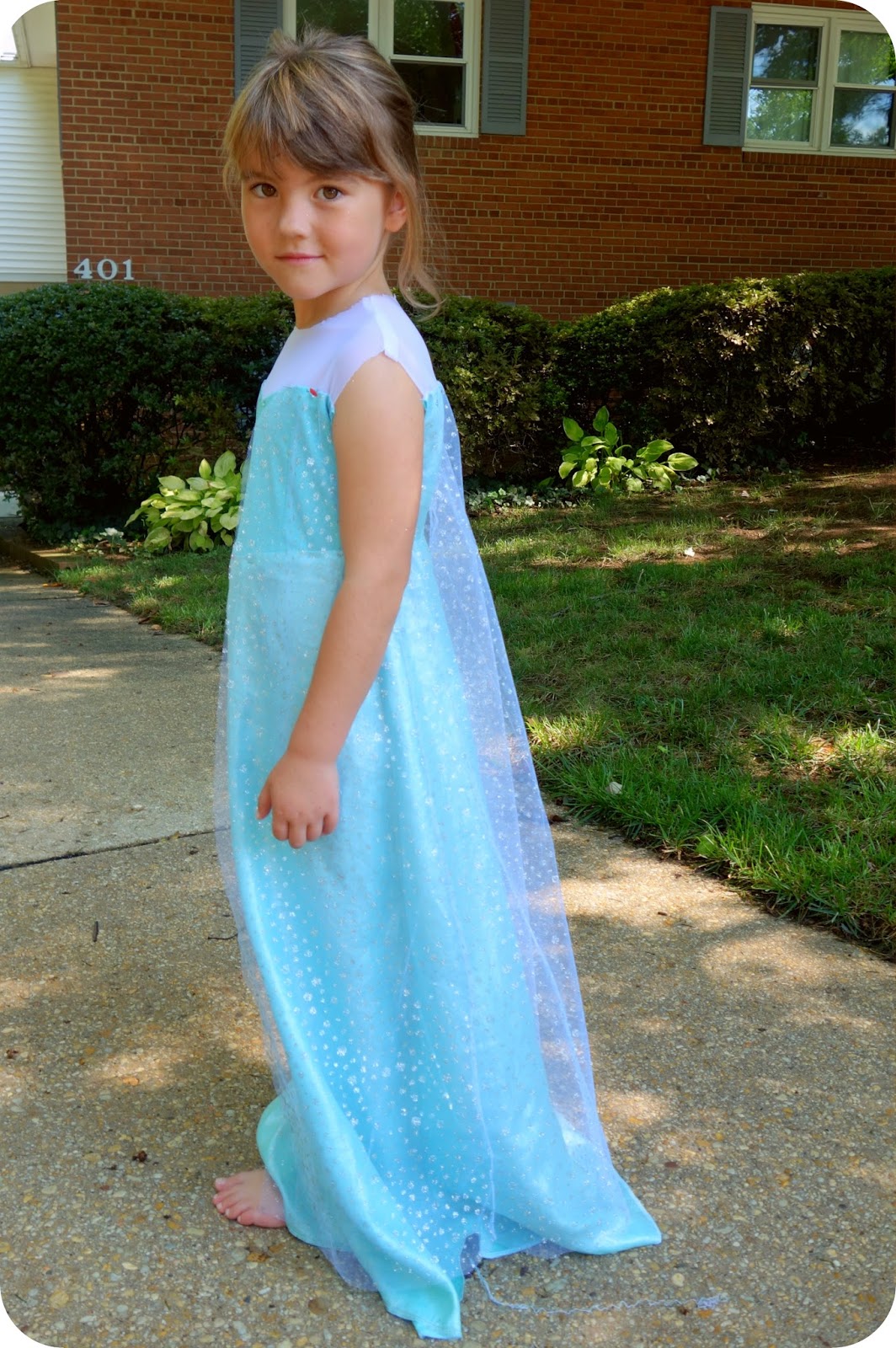 It is obviously still unfinished (hem, sleeves, neckline, and some seam work), but you can see how close this is to being a very good dupe of the Ice Queen look in the movie Frozen.

Although McCall's does not have an official license with Disney to call this an Elsa dress, they got around that by calling it a "Winter Princess" costume.  Okay.  LOL.  If you want the official version, Simplicity came out with their version, and one of their costume designers, Andrea Schewe, led a very good and detailed explanation on how to make an Elsa costume for yourself or your little one. 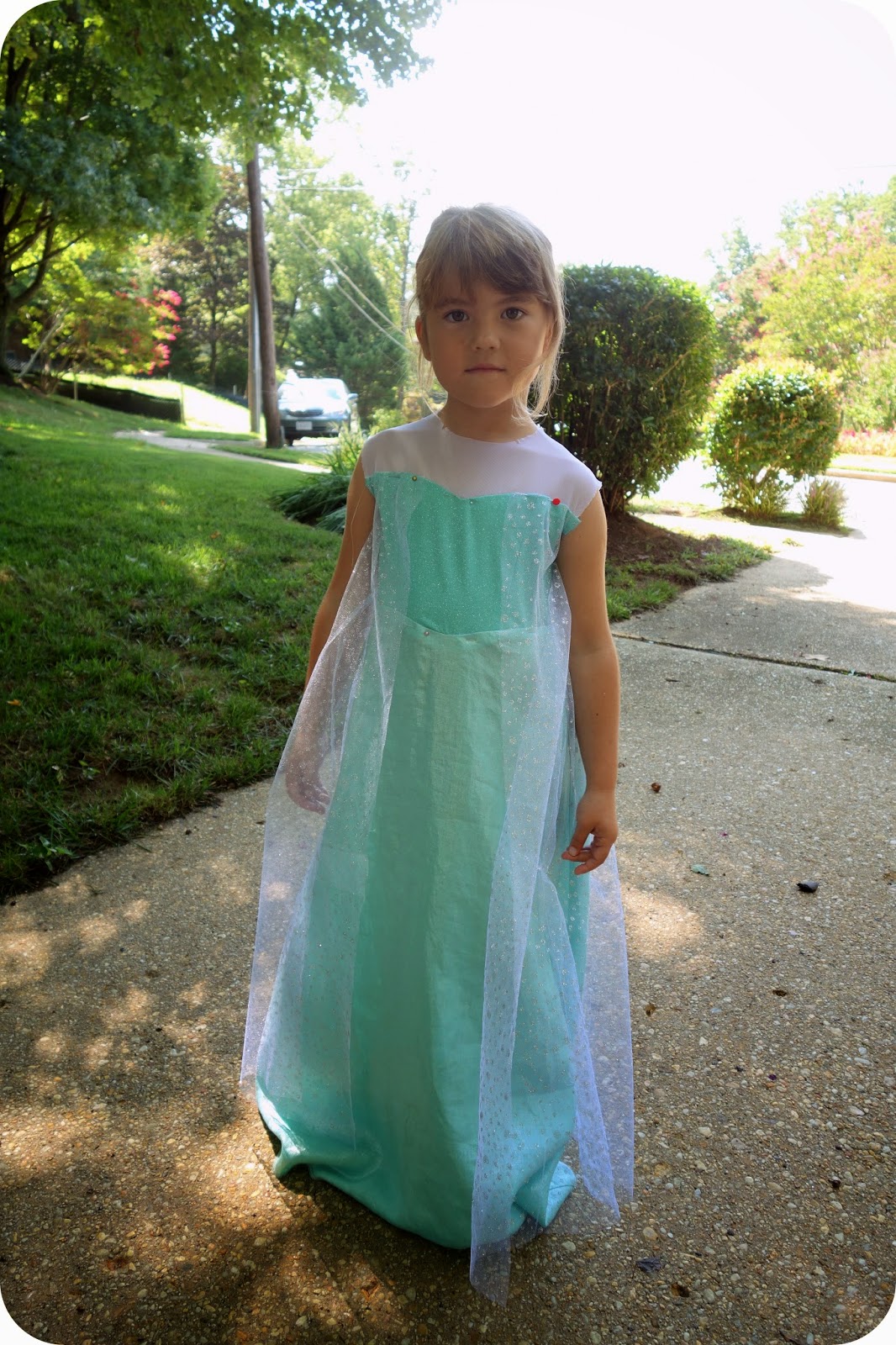 The gown is great for little girls since it doesn't have an off-the shoulder yoke, which would be a little much on a six-year old girl.  I know I could have chosen to use a sheerer material at the yoke, but I prefer this amazing power mesh that I found at G Street Fabrics for a song (was a 1.5 yard remnant--have plenty left over).  It holds up well to the weight of this dress (which admittedly isn't super-heavy with some metallic sheen linen, tulle, and sparkly jersey).  The only thing I had to do to work with the power mesh was to use Stay-tape at the seams in the shoulders so they wouldn't get stretched out over time.

The power mesh is so stretchy that I don't even have to have an opening in the back for her head to get in and out, the neckline stretches super-easily over her head and then goes back to shape no problem.  I can see why all sorts of ice-skating and dance costumes are made with this fabric!  (Don't any of you dare tell my dance/ice-skating friends that I can sew with power mesh, I can only imagine all the requests I would get to make costumes!!!  (Which I get--those puppies are super expensive!) 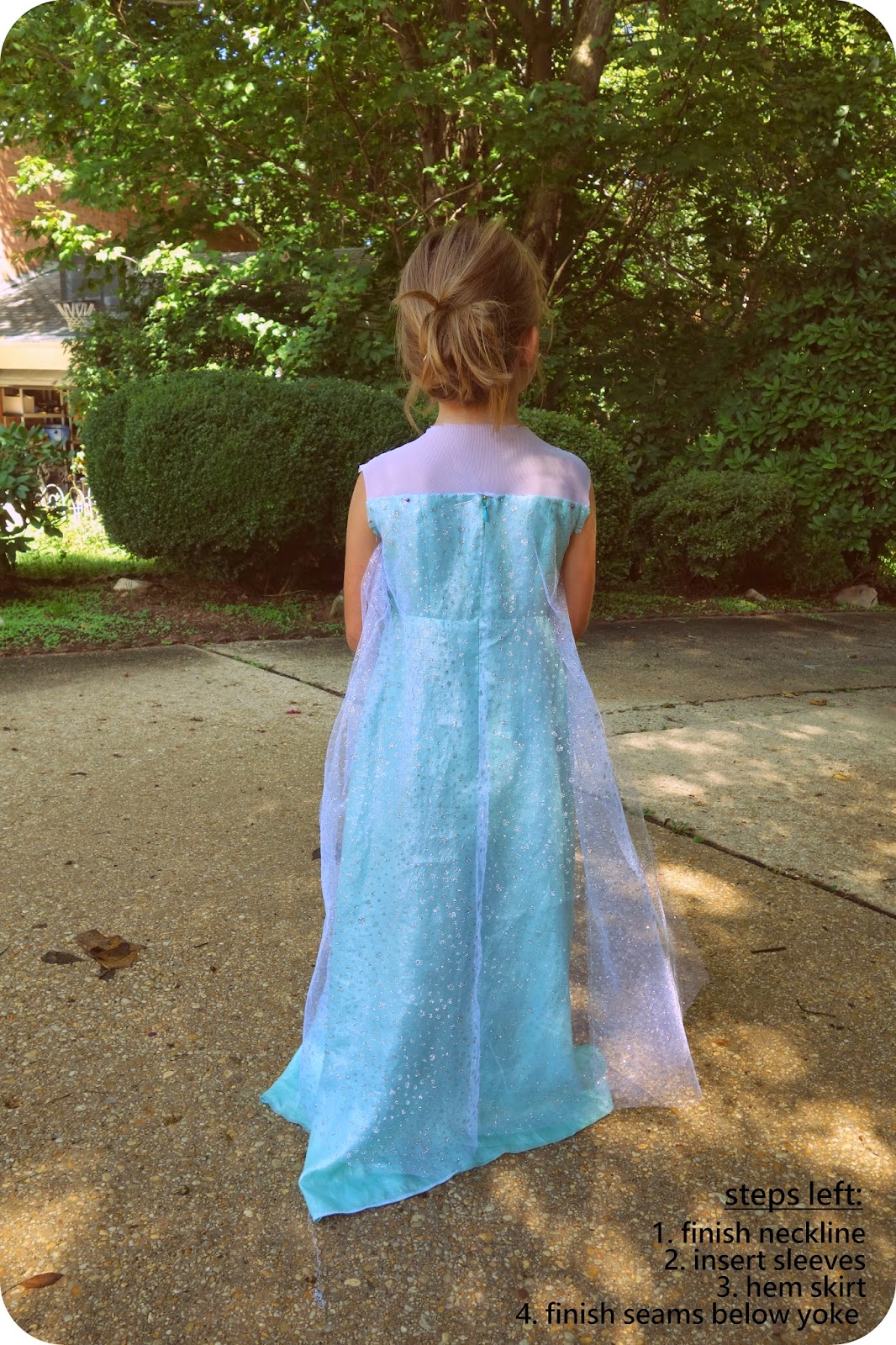 From the back, you can see the closure, which is an invisible zip in the linen only.  It looks like it is in the tulle, but that is an illusion.  There is a small slender opening in the tulle to allow for ease of access to the zipper.

A note on sizing.  CW wears a size 5, 6, or 7 in Boden and Target and crewcuts clothing, and she is in a size 3-4 in this dress.  No that isn't a typo.  A 3-4!  If I had sewn up the 5-6, she would have been swamped by fabric and it would have been way too long.  As it is, it is still really long (even though the tulle bit is the perfect length, the skirt is about 3.5 inches too long).  Definitely tissue-fit your daughter or little friend, just in case.  I am so glad I did.  It looks more Elsa-like when it is fitted to the body (again, within reason for a kid!)

I have noticed that Simplicity patterns run truer to size for kids.  Most of the Simplicity ones I have sewn up for them have fit in their RTW sizing, but the McCall's ones always run a bit big.  Her Easter dress fit great in a size smaller than I thought she should wear (in width, the length I made longer), so I think that is something to keep in mind when sewing for kids...is the company known for its excessive ease in their patterns?  At least I can keep sewing this dress for her until she is 12...she will likely fit into the size 7-8 at age 12.  Ha.

The steps I have left are in the photo, mainly as a reminder to me to get them done asap.  I will likely get as many as I can done before Thursday, hopefully all of them. 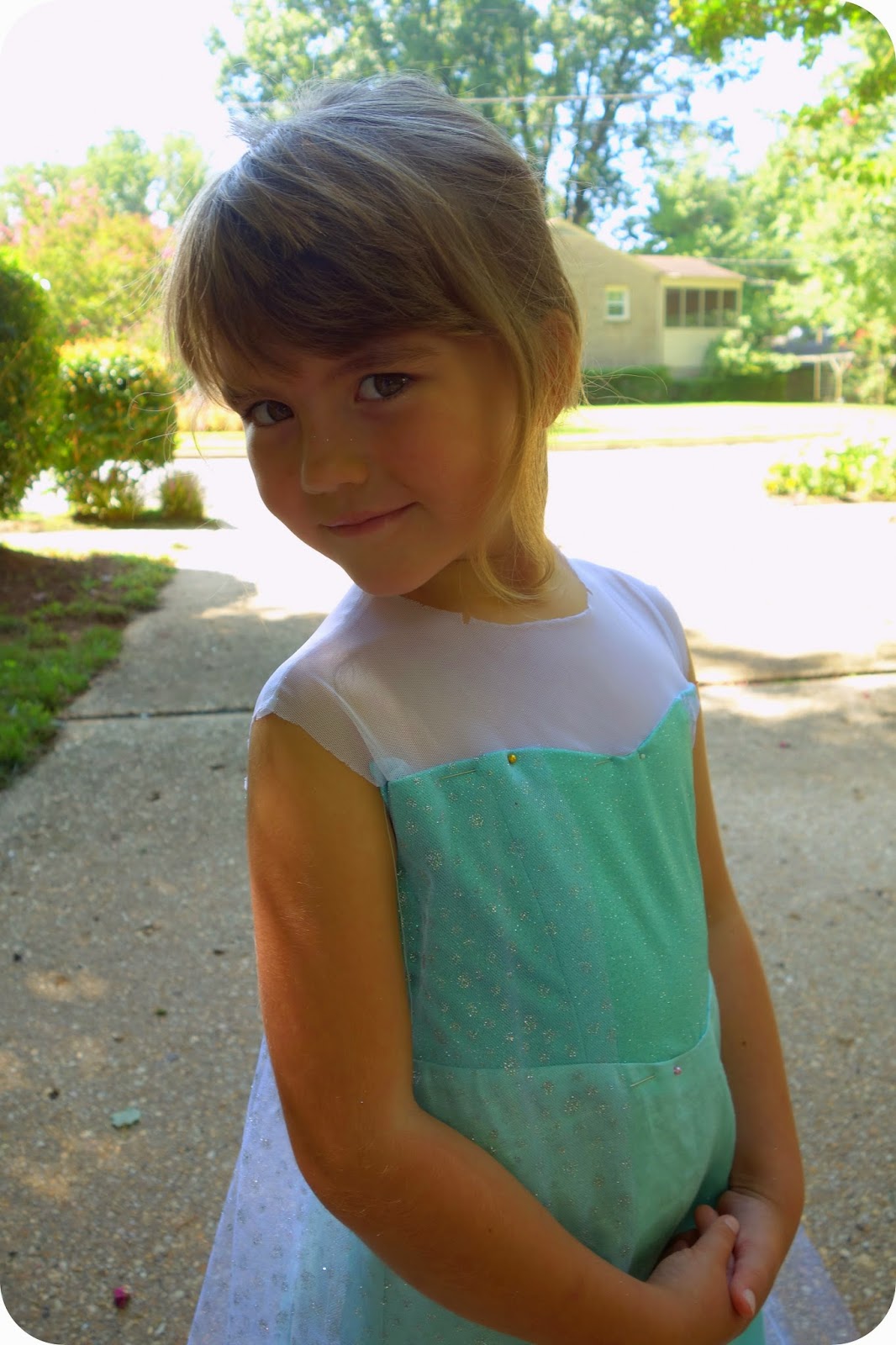 I love this photo.  She wanted to know if she could wear it today.  I told her no, but thankfully she wasn't too bummed that I had more to get done.

The color is weird, btw.  Sometimes, and in some lights, it looks very aqua/Caribbean blue, and in other lights, it looks more icy blue, the way it does in the movie.  I guess it is close enough, but I want it to be the right color, especially since I am working so hard on this!!!

Okay, that's all for now.  I hope you have a great rest of your Monday.  I should be back later tonight or tomorrow with some ootds.
Posted by dinagideon at 4:36 PM