OOTD/Review: Breton and Some Liberty, Please. 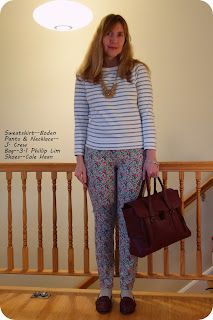 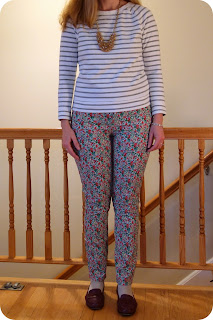 Where: Little Gym and Preschool Run.

Ease of Wear: (3.5 of 5 stars--5 being the most easy to wear.)  Yummy.  Everything, from the thick rugby fabric of the Boden Breton Sweatshirt (available here--review below) to the easy, stretchy twill Liberty print cotton (in the Emma and Georgina floral here--review also below) was so comfortable.  I often think I will be comfortable at Angus's Little Gym class, but I will get there in my "comfortable" outfit and find I am definitely not nearly as easy-peasy as I thought I was going to be.  For those who don't know what Little Gym is and what it entails, the parents or nannies of the toddlers have to run around just as much as their little ones.  I definitely sleep well on the nights I have Little Gym with Angus.

Anyhow, yay for finally choosing an outfit that feels as good as it looks.

Cool Factor: (4 of 5 stars--5 being the coolest.)  The whole outfit is pretty cool, but I still very much give off the stay at home mom vibe in it, probably because I am happily wearing a pair of Cole Haan penny loafers.  ;)  If this outfit was on a fabulous twenty-something blogger, I am sure it would look far hipper.  But that's fine with me.

Anecdote from the day:  Angus's birthday is today (yay for #1), but because all the Little Gym locations are closed this week for spring break, I had him wear his "Birthday Boy" tee to the class that day so his friends and their families could sing him the Little Gym version of the Happy Birthday song (think it is so hilarious that the song is copyrighted and all businesses are forced to create their own song so as to avoid copyright infringement).

Breton Sweatshirt.  I purchased the size 4 since I didn't want to chance another sweatshirt coming to me and being too big on me, which has been happening a lot lately with the Boden tops.  It was a good call, the 4 fits perfectly everywhere, although if you did happen to buy a size too large, the sweatshirt would still look great a bit slouchy.

I really liked the grey color, since I haven't seen this particular color combo on a Breton yet (although I probably just missed it when it did come out).  I also have plenty of striped tops, but it is nice that Boden made this in a sweatshirt, which means I can use it alone once it gets warmer out, and when it is super chilly, it is a very warm layer.

The material is more like those thick rugby shirts that were popular in the 90s (please tell me that some of you all remember those*), which I think is step in the right direction, as I think some of the sweatshirts recently have been too thin and too stretchy.

*I linked to a video of my favorite "guilty pleasure," the show "Fifteen," which ran on Nickelodeon in the early 90s.  Matt Walker (played by Todd Talbot**) is wearing a thick striped rugby shirt in this video.  He's the "hunk" sitting at the table.

**Todd Talbot is now, inexplicably, on the show Love It or List It, Too, yet another one of my guilty pleasures.  Clearly I majorly {HEART} bad Canadian television***.  Shh.  ;)

***And early 90s Canadian country/rock bands, too.  Brad Roberts, love you and your deep deep voice! 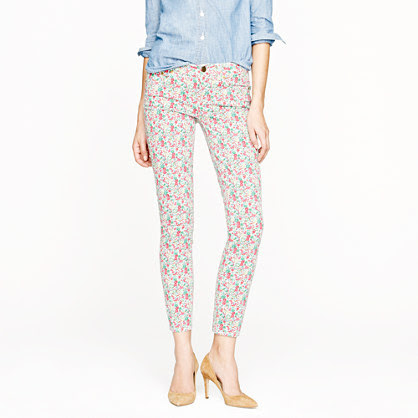 Liberty Toothpick Jean in Emma and Georgina Floral.  I bought these in a tall 31 since I had run they ran small (I wear a tall 30).  Another good call since the hip and thigh area fit perfectly.  I have a smaller waist/upper hip area which means I sometimes have a gap in the waistband, and yes, I did have a bit of one on this pair, but not nearly as bad as it can be.

My inseam is 34 inches, and the length in the tall is a hair under 30 inches, which means it hits right above my ankles, which I love, and appreciate.  Now if J. Crew could get away from making Cafe Capris, I think there would be a whole slew of tall women celebrating.

The floral is beautiful, and much brighter and more primary than it looks on-line.  I thought I was going to end up with something more muted since the J. Crew catalog and stock photo depicted it as almost a pastel (the still shot of the pants, though, is very accurate).

The current sale price, plus the extra 20% off, makes this pair nearly 50% off, which is a pretty good price for what you receive.

P.S. I announced it yesterday, and I am s-l-o-w-l-y working on my "picks" post, but Boden is having one of their diminishing discount sales right now, with 20% off until Wednesday (all current season womenswear is included--Breton sweatshirt, too!), but clearance and any mini Boden in the separate "up to 35% off" sale are not able to be further reduced by this 20% off sale.  You can use my sidebar coupon to access the sale or the one at the bottom of this post.

Fabulous Florida Mommy has a few picks (plus other sale announcements) at this post!  I think she made some great choices.  :) 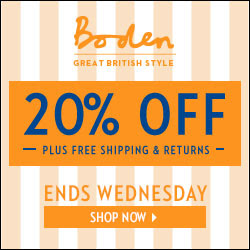 Posted by dinagideon at 3:55 PM