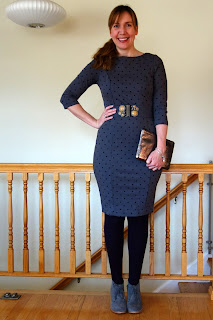 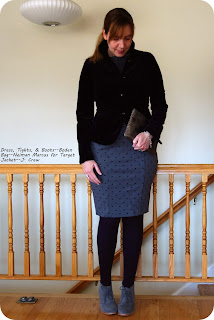 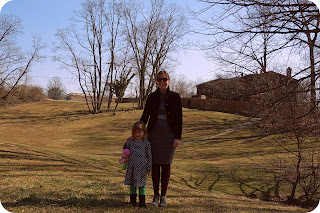 Where: Clyde's for lunch with my girl.

Ease of Wear: (3 of 5 stars--5 being the most easy to wear.) I am taking a couple of points off because the dress's skirt kept hitching up on my tights.  It wasn't anything unbearable, but I did notice it.  I wish I could be less OCD about things like this, but I *know* other women have the same hangup.

If it had been a touch warmer, I could have gotten away with wearing the fitted ponte dress (review here, btw) sans tights, but since it was only forecast to be in the mid-50s, I knew it was tights all the way. (As much as I adore the velvet Bella jacket, it isn't super warm.)

The effortless suede boots, once again, proved why they will always be a fixture in my wardrobe.  I love how they can give a little lift (literally and figuratively) to most of my outfits, yet are so very comfortable.

Cool Factor: (3.5 of 5 stars--5 being the coolest.) I think it looks pretty good, but it may be a bit too much "look" for some of you since I decided that a knee length dress and tights and ankle booties worked.  From what style 101 dictates, that combo is tremendously awful on the leg line, creating stumps instead of stems (remember this scene in Clueless?).  I am fairly tall, and most of my height is in my legs, so I am okay with the *stumping,* but I get it if this is not your thang.

Anecdote from the day:  So I was approached by a friend at bowling yesterday who asked if CW and I had been at Clyde's a couple of Sundays ago.  Obviously we had been, but I was very amused that someone had seen us walking to Clyde's that day.  She said she had tried to find us, but because of how many rooms this particular Clyde's has, she had to give up after the first five or six.  LOL.  She supposedly stopped right before she got to the room we were in.

CW loves Clyde's, which if you know this restaurant, is slightly amusing, since she is 4.  Anyhow, I got her the kids' meal with a hamburger, asked for well done, and out comes a very pink center patty.  Guess who didn't care?  Yeah, that's my girl, giving Anthony Bourdain and Andrew Zimmern a run for their money.  However, she won't touch mashed potatoes. 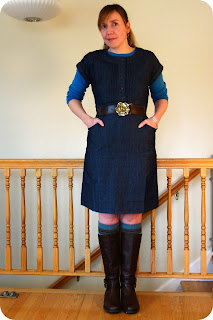 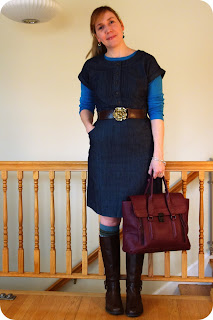 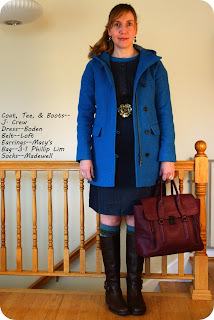 Where: School Run and Jo Ann Fabrics, but no preschool run that day.

Ease of Wear: (3.5 of 5 stars--5 being the most easy to wear.) I had to get over the way the bodice fit (since it runs large through there on me--the review is here, btw), but once I did, and sort of *wore in* the dress, I was very comfortable.  It just took a while to get used to the way the casual pintuck dress felt.

It was very cold, windy, and rainy, though, and I was very happy with my choice of the thick stadium cloth coat (rightly called the Elements coat), thick wool knee socks, and leather boots.

Cool Factor: (3.5 of 5 stars--5 being the coolest.) Since I normally am "Miss Pattern Explosion," this very sedate and monotone outfit is out of my proverbial comfort zone.  It is also the first time I tried the whole "knee socks and boots" look that everyone else does so effortlessly.  I really liked the way it came together, but the outfit isn't super special, so 3.5 it is...

Anecdote from the day:  I decided to go to Jo Ann's before picking up Rex from school.  I went ahead and purchased a rotary cutter and self-healing cutting mat (they were 40% off, too!) since I despise cutting fabrics with scissors.  I try to be so careful with the scissors, but I end up making mistakes, and if you sew, you know what a pain in the a$$ it can be to sew on fabric that doesn't follow the pattern properly.  The rotary cutter has taken some getting used to, but I will say that being more careful with that leads to really precise cuts, and can also take curves better, which my scissors cannot. 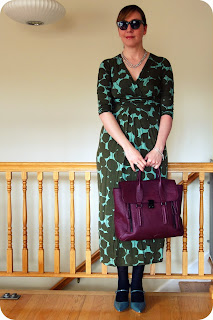 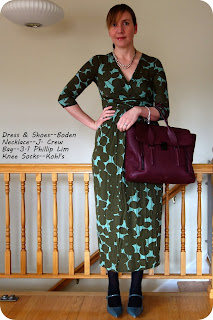 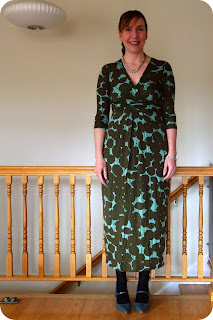 Ease of Wear: (4.5 of 5 stars--5 being the most easy to wear.) I am in a "soft as a baby's bottom" jersey dress, a pair of knee socks (hey, no need for full tights!), and small heels.  It is hard to imagine a more comfortable outfit.  It would be a 5, but the Pointed Mary Janes (review here) are not ballet flats, so a tiny bit more of a challenge to walk in.

I love this dress, and am very glad that it still fits me well, despite having been purchased specifically as a maternity dress (seen here and here on me while pregnant).

Anecdote from the day:  I love that my hubby is willing to let me take an afternoon off once a month to get a massage/body wrap/facial.  I never realize how bad my back/shoulders/neck feels until after Miss Michelle gives me her very intense (read: kind of painful) massage.  I usually walk out of there feeling like I am walking on a cloud of marshmallows.

It is always followed up by Winesday, which makes it even more lovely. 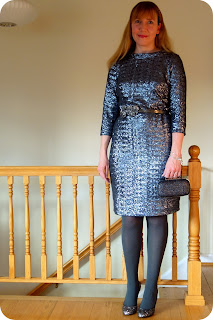 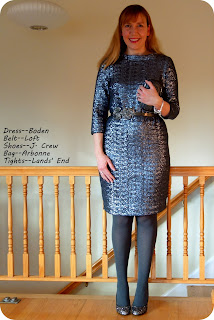 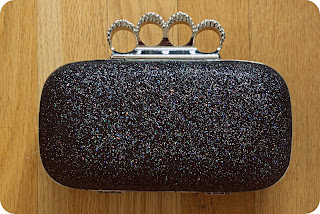 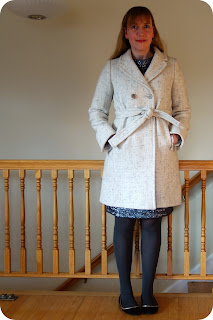 Where: Church and then the school auction.

Ease of Wear: (4 of 5 stars--5 being the most easy to wear.)  For a party frock, this is really comfortable.  The sequinned dress (review here) is a stretch jersey with a lining, so it feels wonderful on, with none of that "ugh, what in the world is pinning/scratching me" feeling that sometimes happens with party dresses.

The least comfortable part of my outfit was the glitter Mona pumps, but even so, I wasn't dying or anything, and managed to stand up in them for at least an hour and a half of the evening.

I wouldn't have minded keeping the pretty metallic trim ballet flats on, though (bottom photo).  I only brought them, though, so I could wear something far less "in your face" to church right beforehand.

(Yes, I just said I went to mass in the sequinned dress and ballet flats.)

Cool Factor: (4.5 of 5 stars--5 being the coolest.) This is such a cool outfit.  It is really hard to mess up cocktail attire, though.  LOL.

The clutch is from Arbonne (comet cosmetics collection), and was one of their offerings over Christmas time.  Basically, you ordered the clutch and it came with four eyeshadows and a bright red lipstick.  I fell for the clutch first (since it is reminiscent of Alexander McQueen), but appreciated the extra goodies, of course.  Only issue with the clutch is that the chain sticks to my hair, but since I don't plan on wearing it that way (as a handbag), it doesn't even affect me.

Anecdote from the day:  AI went to church before because the auction was in the church's basement.  Since I like to kill as many birds with one stone as I can, I decided that I could wear a sequin, spangled dress to church so long as I wore the coat over it the entire time and wore the flats (I brought the pumps and changed into them after).

Once at the auction, it was A BLAST.  My friend (and Rex's girlfriend's mom) and I hung out and drank vodka-spiked lemonades.  Yum.  Mr. Dina bid on two things, a basket of Chik-fil-A free meal coupons, tees, and mugs, and an after-school class for Rex.  He won both.  (Mmm...chicken!)

My friend told me that the live auction was crazy.  The Robert Griffin, III. jersey went for 1000 dollars, which we totally expected, but the handpainted bookcase that Rex and his classmates made (that was from the day I spent entirely at Rex's school--also Rex and RG3's birthday) went for 900 dollars.  You read that right...a very basic, very diy-looking bookshelf went for almost as much as a jersey from a Redskins' quarterback.  Guess it was good we put all that effort into making it!  Yeep. 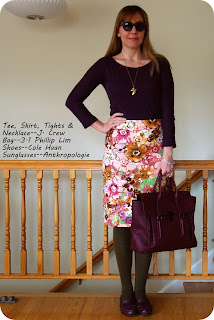 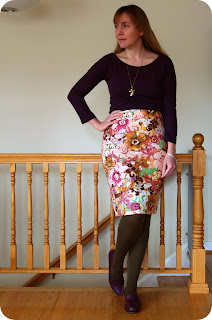 Where: Bethesda run, which means one thing--LOUISIANA KITCHEN (and their amazing cajun martinis).

Ease of Wear: (4 of 5 stars--5 being the most easy to wear.)  Love how comfortable this outfit is, even though it looks like it should be more uncomfortable.  It isn't fully comfortable since the tights aren't control top and I had to hitch them up every hour or so.

Monica H., my good friend from CA (seen here with me in this post at Winesday), gave me this skirt a few months ago since her wee little hips couldn't fit into them anymore.  I was more than happy to accept her gift, and am glad we are now getting to a point (read: warmer days) where I can wear this, finally.  :)  So thank you again, Monica!

Cool Factor: (3 of 5 stars--5 being the coolest.)  Some of you J. Crew ladies are gonna love this outfit, since many of you love this skirt.  Others of you will be all, "yeah, not so much."  Let split the difference and give it a 3.

Anecdote from the day:  Mr. Dina is a terrible parallel parker.  He will give up and drive really far away to find an easier spot to park in, which is no big deal when it is warm and sunny, but on days when it is blustery and cold, it is nice to be closer to where we need to be.  It wasn't that cold that day, but with three kids, and the *perfect* spot nice and wide open, I told him to just let me park the darn car.  If you grow up around here, learning to parallel park is absolutely a necessity (unlike in Mississippi, home of wide parking spaces EVERYWHERE!), so I can get into the tightest spaces imaginable.  Mr. Dina always seems amazed that I have no problems doing so, and to further mess with him, I usually take a bow afterwards.  LOL.

Anyway, after my (only known) feat of strength, I was more than happy to imbibe the Cajun martini.