Made by Me File: Splatter Abstraction Simplicity 1590. Thank You, Jackson Pollock and Lee Krasner.

UPDATE (10/18/14): I just found out the news, and I won the final week, which means I won the challenge!  Wow!  I was not expecting that result, to say that I am stunned is a bit of an understatement.  I am so excited, though, of course.  :-)  It was a great time, I learned so much during these six weeks, and my competition were truly amazing sewers and I am glad to say I have gained so many friends through this process.  Thank you to Fabric Mart for hosting the challenge, and thank you to all the judges for taking their time to look at our pieces.  Their feedback was so helpful for my sewing!

This is the last entry for the Fabric Mart Fashion Challenge!  I made it to the finals.  I really hoped to go far, but honestly, because I started as the "lowest" level sewer (advanced beginner--there were a lot more seasoned sewers in the competition--churning out amazing things every week), I expected to be auf'd sooner than not.  So to be here, right now, is very exciting!  :-)  I want to thank all of you who have so supportive of my creative endeavors of late, having your sweet words and nice comments definitely helped in all those moments when I was so tired I could barely keep my eyes open after a long day of sewing.

I haven't won one of the weeks, yet somehow still here, so I guess I was *just good enough* all those weeks to keep on keeping on, lol.  The final three do receive a prize, so yay!  I'll take bronze if that is what I end up being.  I'm cool!  :-)  (But wouldn't say no to a silver or gold, of course...)

Anyhow, here is my final entry, and because I want to go out with a bang (and take a big risk), I chose to create a blouse inspired by the art of Jackson Pollock, his wife Lee Krasner, and the era in which they both created their visions, the 40s and 50s.

Before I start, the first five photos are done like I am in a magazine, but we were asked specifically to do so by the challenge (stage your outfit in a setting that will go with your vision...think of yourself as a model in a fashion spread), so understand that is why my mid-century Eames rolling chair (mine is the real deal that I was able to save from being trashed!) is perched at the edge of my driveway with the vista of the forest in the background. 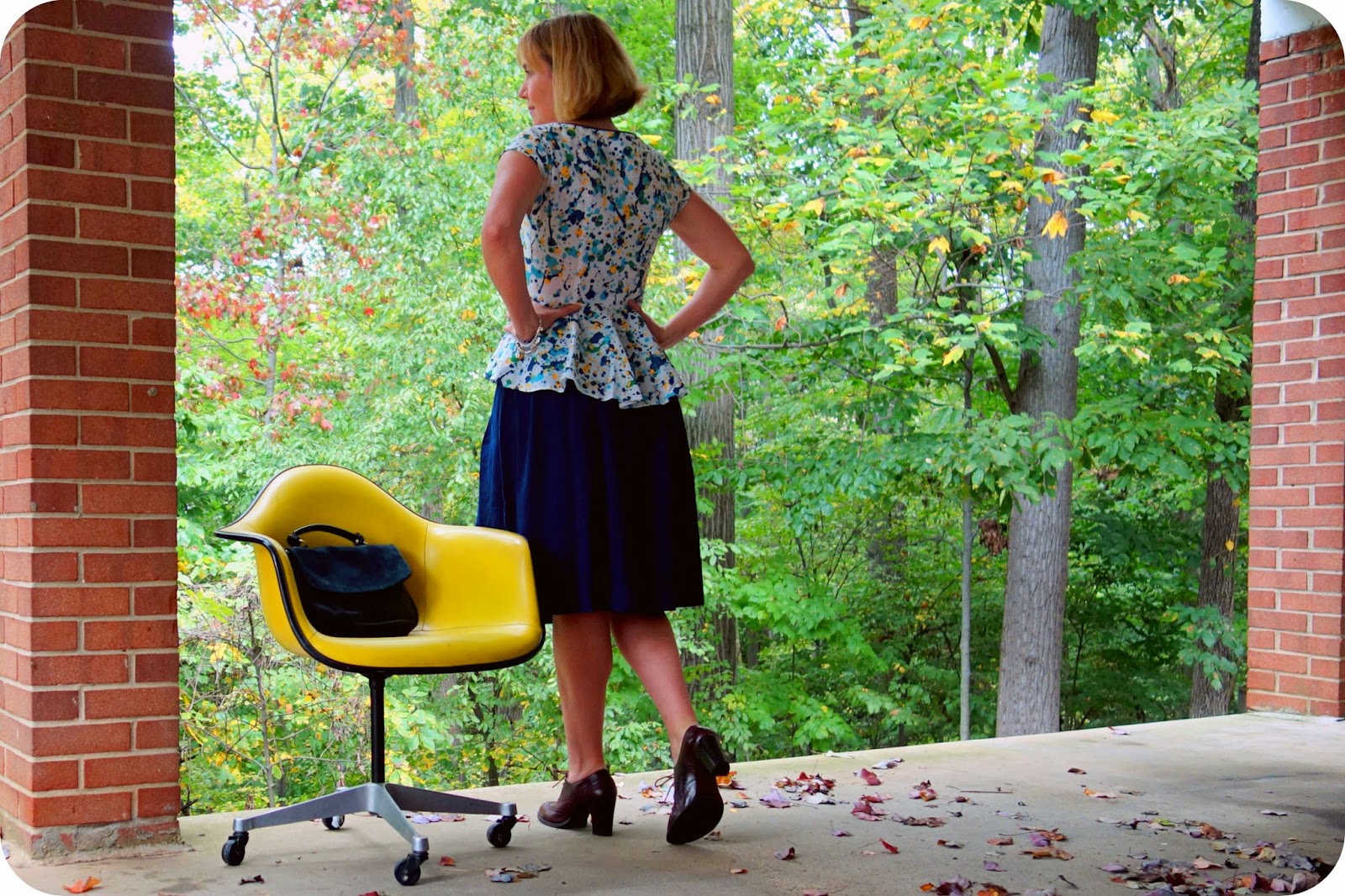 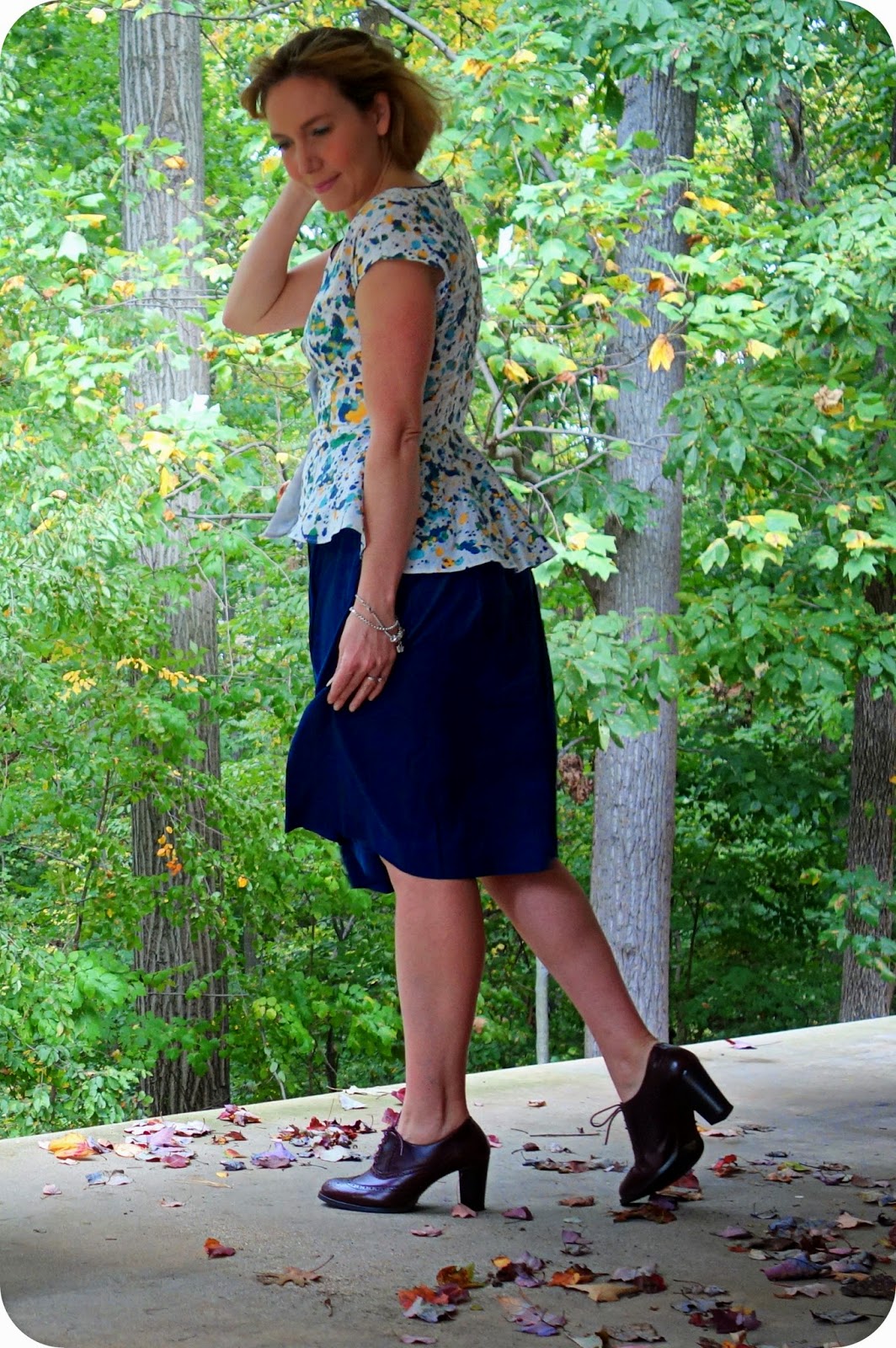 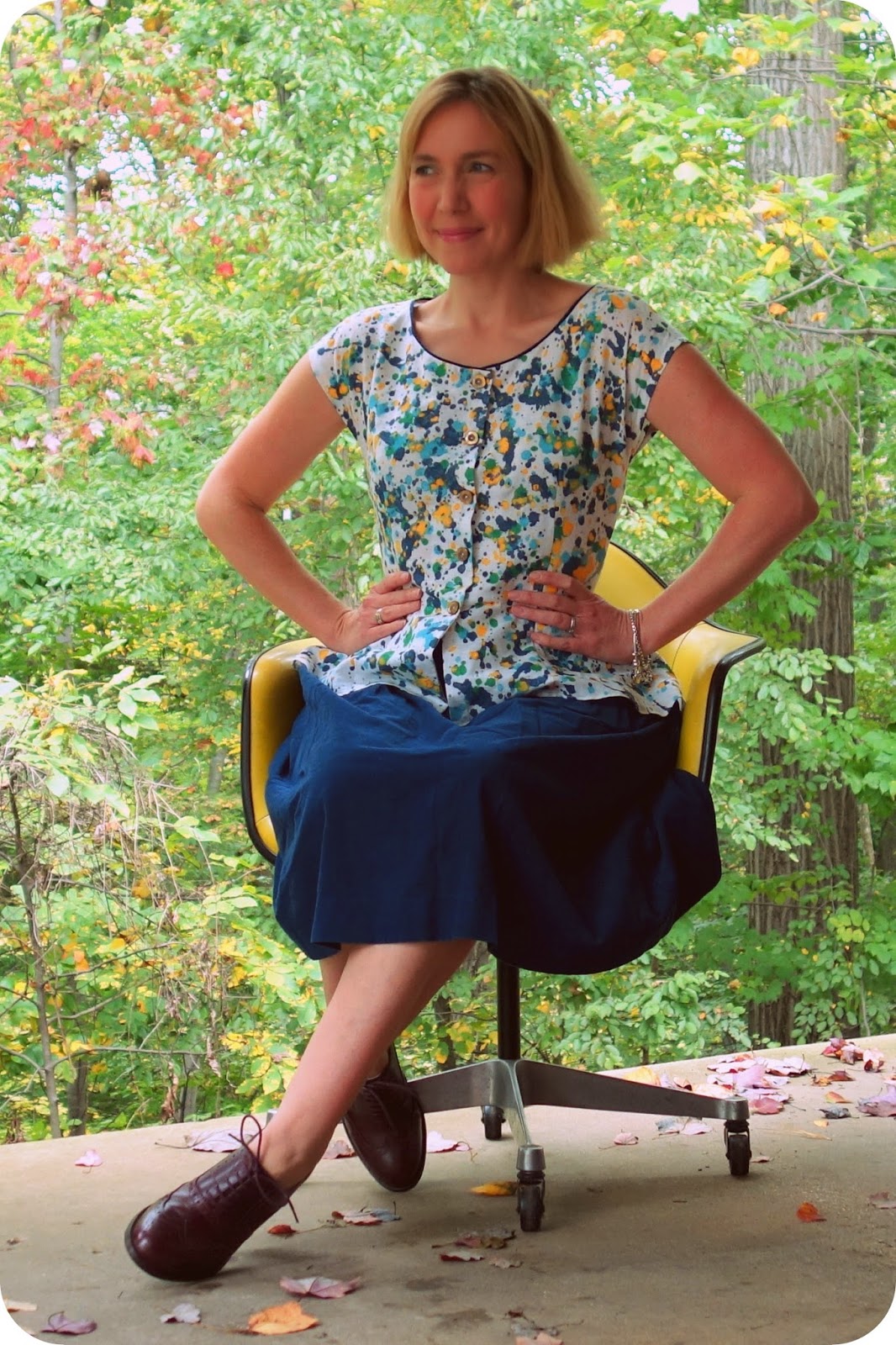 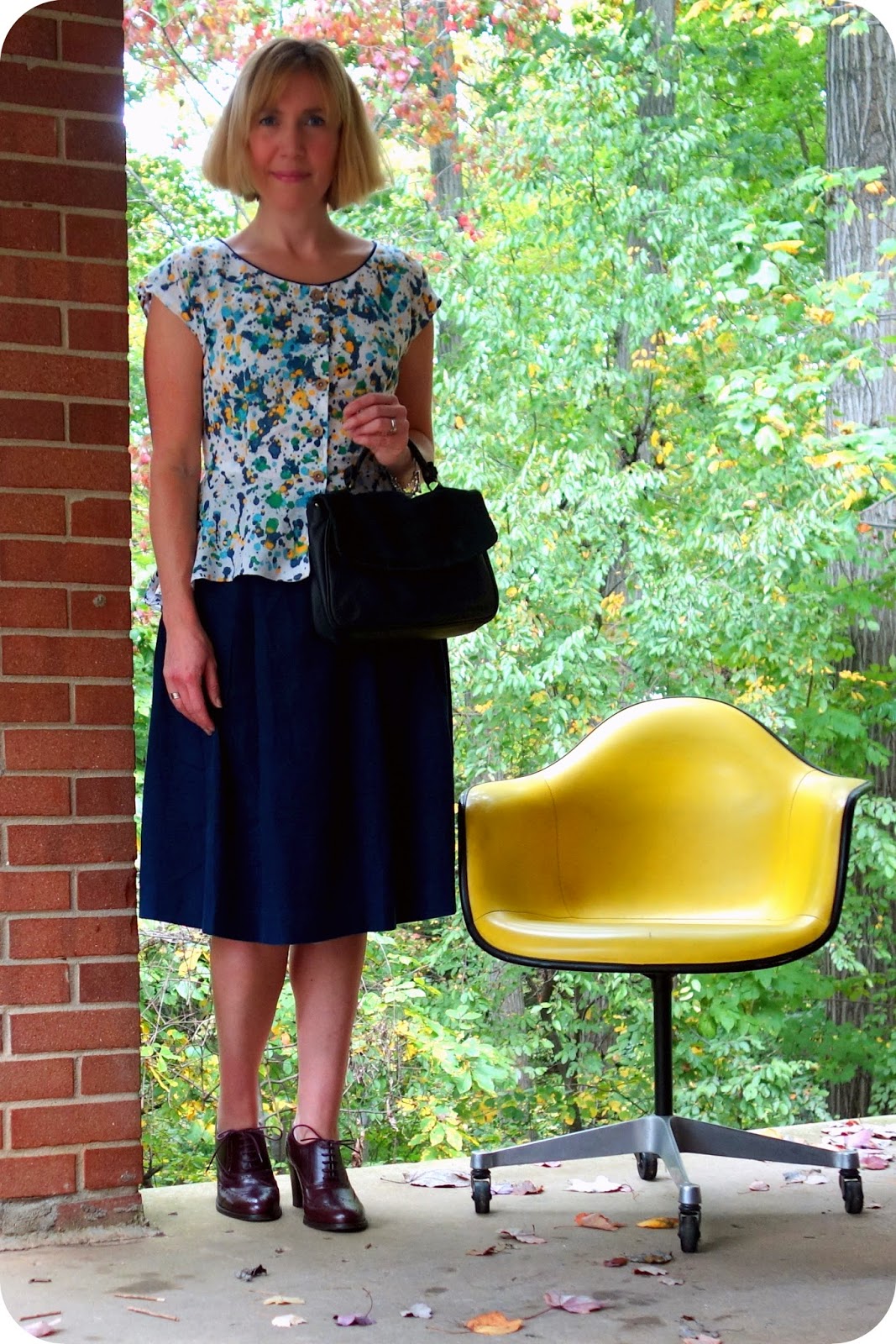 I was asked four questions by Julie, and since my answers pretty much cover everything I would have said here anyhow, I will copy and paste those here.  :-)

Tell us what artwork, movement, etc. you chose and why you chose it.

After reading what the last challenge was going to be, my brain *immediately* went to Jackson Pollock. I own some Liberty tana lawn called Melly that is very reminiscent of his famous "splatter" paint technique and thought I would use that at first to create a design from one of my Japanese dress books. But after doing some research on Jackson Pollock and reminding myself that the National Gallery of Art here in DC has one of his most famous works (that I also happen to LOVE) Number 1 Lavender Mist, I knew that I wanted to try painting my fabric myself, in colors I love, just like he did with his work. To see how he did his splatter paint technique, check out this link. I explain how I created my vision of his work in my fabric in the next questions below.

But he alone did not inspire me in my creation. I also read up on his wife, Lee Krasner, who also was a very successful, if less well known artist, in her own right. She was overshadowed by her husband, but her works also inspired me, as she, too, created works using a similar technique to Jackson Pollock.

The garment I decided to make is from the era of both of these artists and based on the portraits I saw of Lee Krasner, I could easily have seen her in a similar piece.

Then also tell us about your garment, why you created what you did and how you can use it in your life.

I chose Simplicity 1590 which is a reprint of a blouse pattern from the 1940s.  It features a scoop neck, fitted waist, and a peplum hem. There is also a five button closure. I chose this pattern, as I mentioned above, because it looks to me like something a woman like Lee Krasner would have worn, and since I wanted to keep her as part of my inspiration, I was specifically looking for something from that era.

I also felt like the painting method used by Pollock would look good on a garment like this. I saw that other designers (recently, in fact) have used Pollock for inspiration in their collections (Dolce and Gabbana 2008, amongst others--AND Sportmax 2014--Rosario Dawson is wearing one of the dresses here).  Armed with the knowledge that I wasn't alone in my love of his unique art, I forged ahead, willing to take the risk.

I loved the idea of something so prim and ladylike being paired with something so messy and not prim. The disconnect makes this garment exciting to me.

I find it very wearable, but do look forward to washing it. You have to wait at least 72 hours before doing so, but based on how long it took to dry, I think I will wait a week and carefully handwash mine and line dry it.

I will be wearing it with jeans since it looks so cute that way, but maybe for a night out I will wear it as I did in my "editorial/magazine" photos. 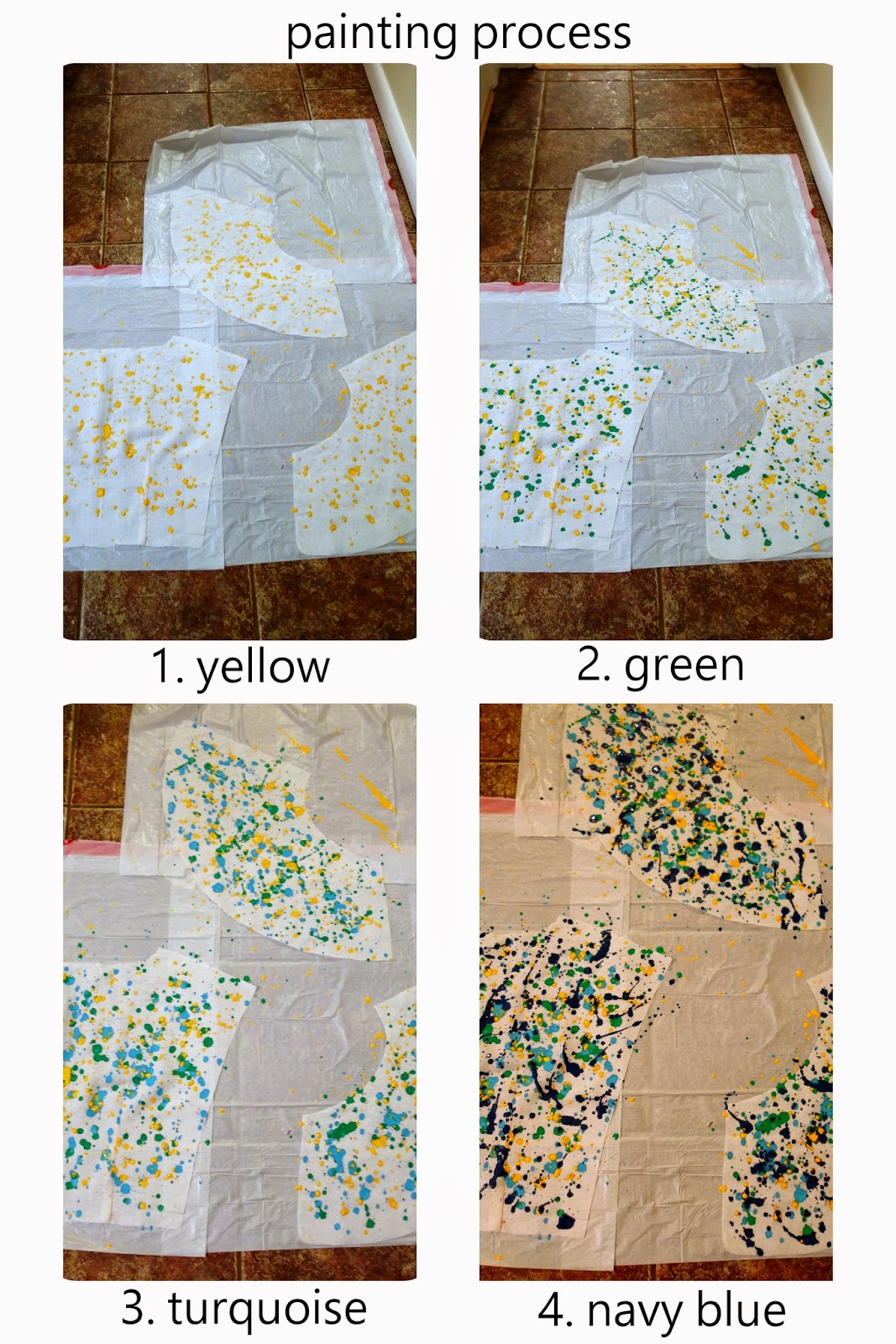 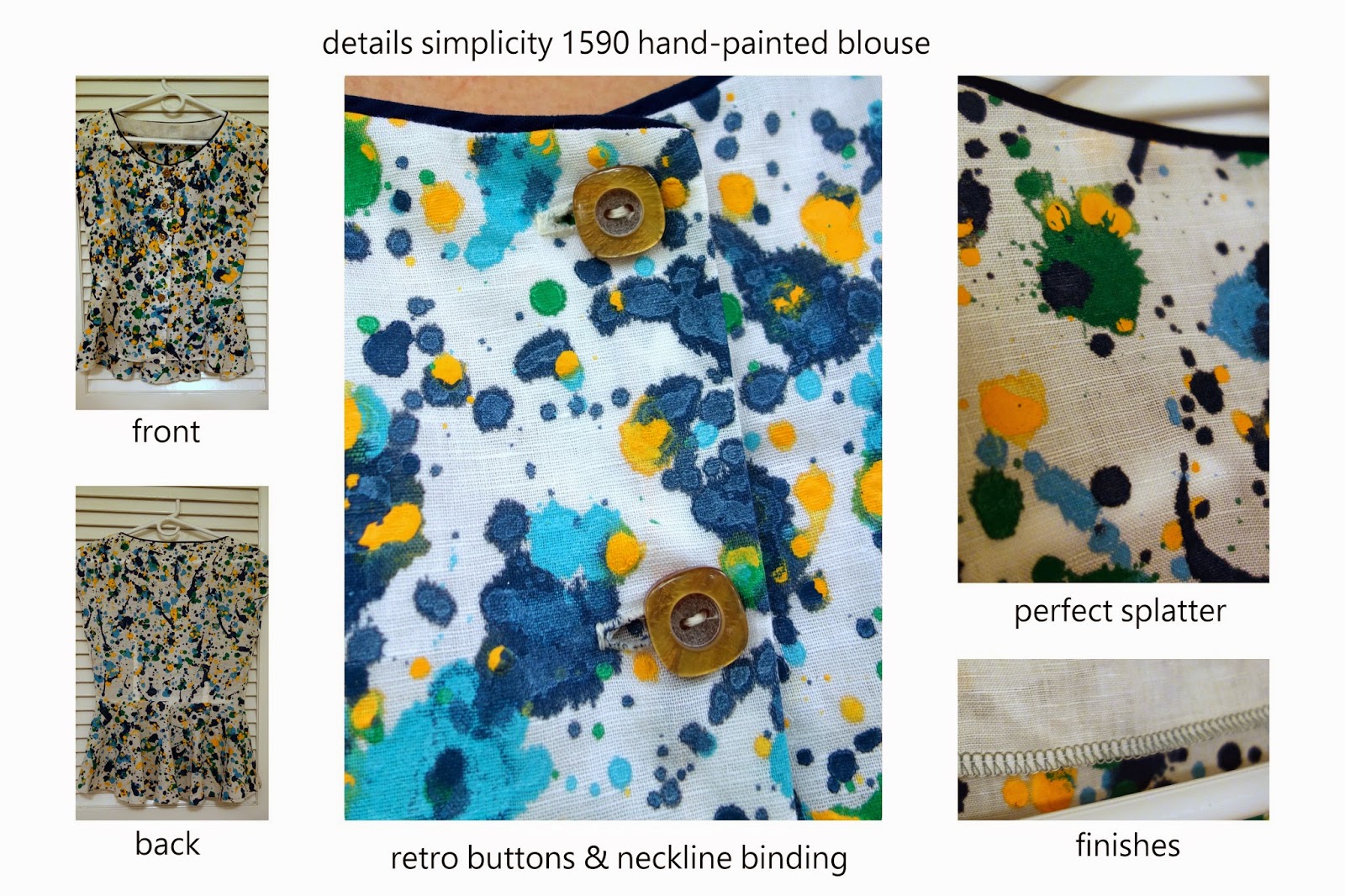 Explain what fabrics you chose and why.

I chose handkerchief linen because I know linen is perfection for accepting paints and colors, so it was a no-brainer choice. I had *just* enough to make my garment with a little left over for experimenting on before I began the big painting job. After deciding on how I wanted to apply the paints--yellow, green, and turquoise were all applied in drips and gentle waves, while navy blue was applied more aggressively, I proceeded and when pleased with the results, I left the pieces to dry. It says four hours on the Tulip soft paint, but it took nearly twenty-four hours to get mine to dry fully.

(I need to point out that I needed to add water to the Tulip soft paint to get it to the correct viscosity for applying the paint the way Pollock did, in its regular form it is far too thick.)

I found that once dry, the pieces were easy to sew together, but the pressing process was very interesting and took me a long time since I didn't want to ruin all my hard work. :) 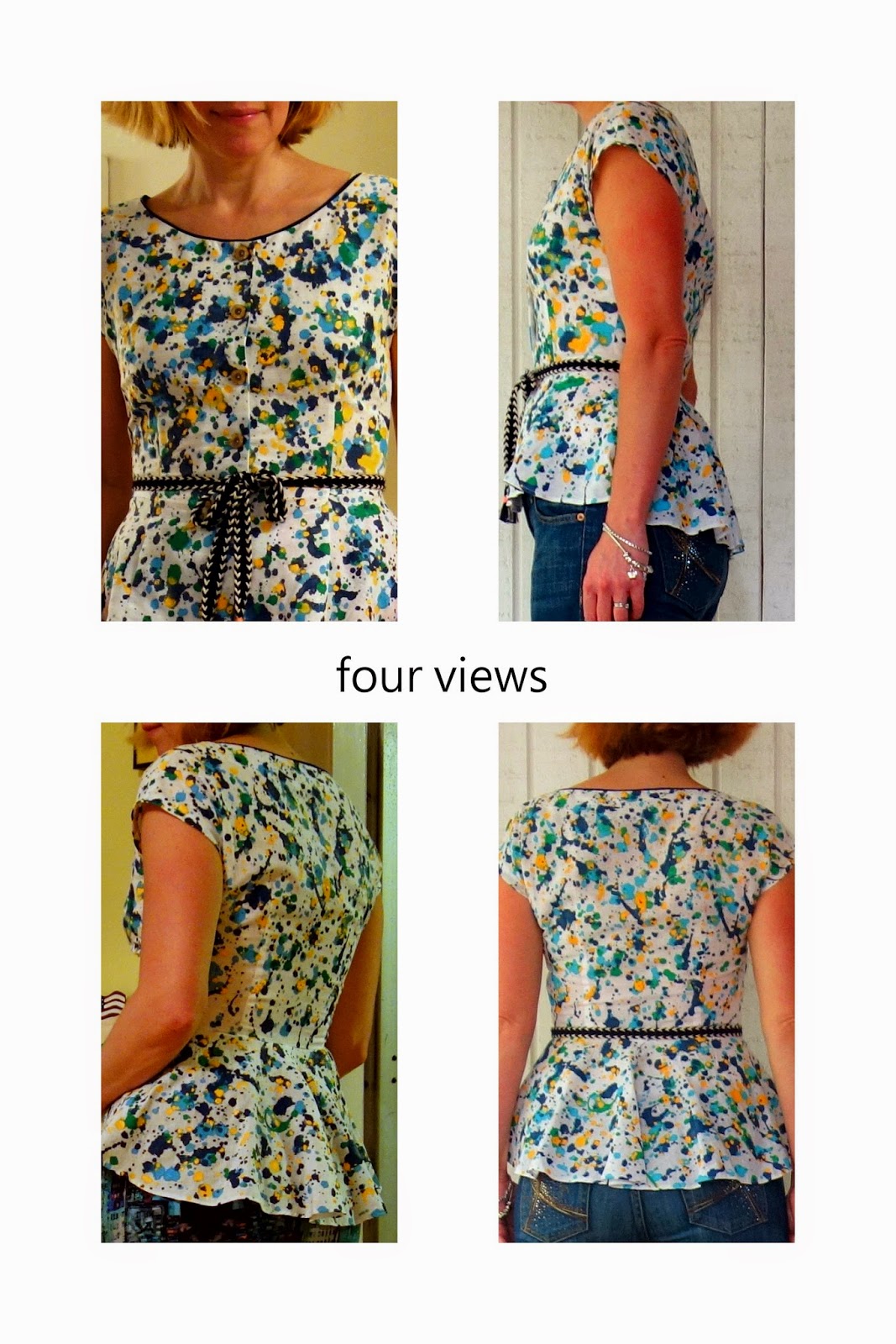 Include a photo of the inspiration too.

I was inspired by this quote by Pollock, which allowed me to fully release and let go during the process of painting my fabric: “When I am in my painting, I’m not aware of what I’m doing. It is only after a sort of ‘get acquainted’ period that I see what I have been about. I have no fear of making changes, destroying the image, etc., because the painting has a life of its own. I try to let it come through. It is only when I lose contact with the painting that the result is a mess. Otherwise there is pure harmony, an easy give and take, and the painting comes out well.”

Okay, that's it for now.  Again, I am so grateful for all the support.  I am definitely worn out, but feeling great that I stayed the course and kept on keeping on.  :-)

Voting will be open tomorrow and I will update this post with a link if you feel *inspired* to vote for me.  ;-)  For now, here is a direct link to the Fabric Mart blog.
Posted by dinagideon at 10:15 PM