I have some turmeric in my spice basket and even though it seems to be an orangey-yellow, sometimes even orangey-red color, Boden keeps insisting that the color that I see as a yellow-green is in fact turmeric. 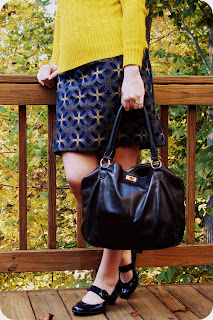 In my opinion, J. Crew had the closest shade to turmeric last year, which is the color you see on the sweater above, which was part of an outfit I wore on Sunday to church.  Boden's Amazing Embroidered Skirt (which is my hands-down favorite piece from them, ever) came close to the real color of turmeric in the threading of this skirt, but since the main color is navy, this skirt was not amongst the items named after this delicious spice. 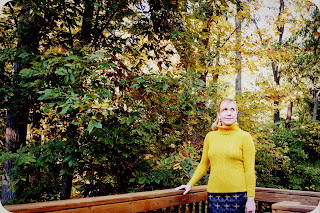 The shade nearly matches the turning leaves of the sassafras tree behind me, which means that if Boden wanted to, they could name the shade sassafras as well and be nearly as close. 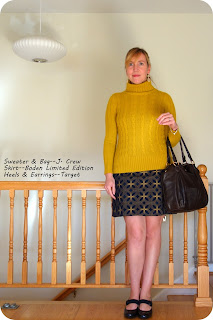 Pieces of the ensemble from Sunday's outing.

Normally I try to be more conservative when attending service at church, but by the time I got to this photo, it was too late to put on a longer skirt.  I had wanted to wear tights, but combined with the very warm turtleneck and the high afternoon temps of 70 F, I would have been boiling whilst singing the hymns. 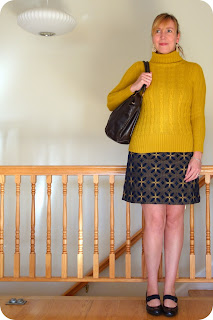 In real life the skirt seemed less short, but looking at it here, I am a bit ashamed to see that maybe it was shorter than I realized?  ;)

Ah, well, still no big deal as I have personally laid eyes on halter tank tops and shorter skirts than this at church, but I don't know that wearing any of those is necessarily the best example for the future generations (my darling Rex, CW, and Angus) that I bring with me. 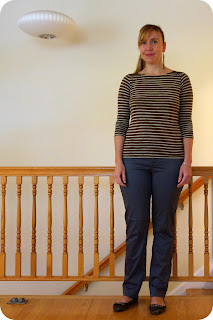 I probably should have flipped my outfits and worn this outfit from Saturday to church instead.  Live and learn.

Was running errands all day with my brother, with a stop at the Sushi buffet. 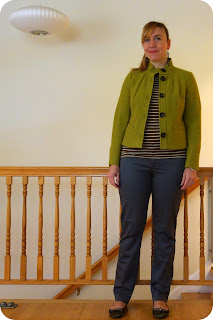 Don't worry...still focused on the title of this post...turmeric.  This Funnel Neck Jacket

is an absolute steal at $88 (down by half), but is also inexplicably supposed to be the same shade as the yellow sweater above.  Do you see any pure yellow/orange in this jacket?  I see a yellow bordering on olive.

But because I don't care, and happen to love this shade of yellow/green, Boden could call is asparagus juice and I would still have bought it. 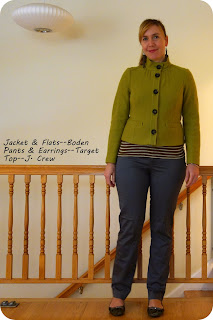 Here is the jacket all buttoned up.  Was a bit much to button it that day, as by noon the day was warm enough to not wear it (I spent most of Saturday just in the striped tee and pants), but since I can't resist reviewing new items for you all, I buttoned it up to show how it looks all done up. 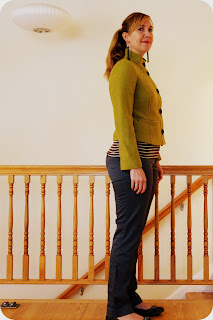 I purchased this in a size 6, and as you can see from the side shot, the jacket runs short in the body but with quite long arms.  I prefer it when my jackets have a fit like this because of how disproportionate my torso is to my lower body (if jackets are longer I have to accommodate my larger hips).  So if you are a pear shape with a short torso, this jacket may be one you should have in your closet.  I tried it with fuller skirts, btw, and it is a great topper for those, as well.  (I often have troubles with what type of top to wear with full skirts since I don't want to look like I have no upper body, and if I tuck my tops into full skirts, that is what I end up looking like.) 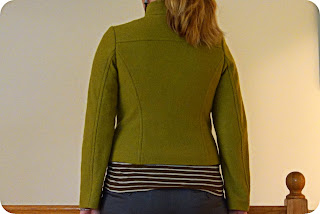 From the back.  Nicely made, great boiled wool fabric, and lined in a luscious purple lining.  I like the funnel neck detail, so I wore my hair up so people could better see it. 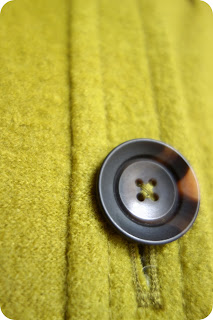 This is the most accurate shot of the color.  Plus if you open up the photo you can see what the boiled wool looks like up close.  Very warm fabric, btw, here in VA, definitely can be outerwear during the mid-fall/mid-spring months of October, November, March, and April. 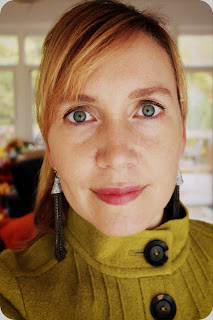 Close up of the makeup and the very cool Kirna Zabete earrings that I found on clearance at Target for $7.50.  I think they look like jelly fish, but I don't know if that is what they are supposed to look like.

P.S. I have received or seen quite a few Boden reviews for this week's Boden Weekly Review Roundup.  Since I *know* there is no way I can get the post up today, if you send me the review by tomorrow morning, I will be able to include yours in this week's.  :)  Thanks in advance, btw.  You all are the best!

P.P.S. Oh, and before I go, I will leave you with an image I found of turmeric, which shows it as both yellow/orange and pure yellow.  You make the call...is Boden correct in calling its items turmeric or should they switch to asparagus juice or sassafras?
Posted by dinagideon at 1:18 PM