How many of you received this e-mail from Johnnie Boden this morning?  I literally lol-ed loudly upon getting it.  I then showed it to my hubby who also lol-ed.  (He insists he doesn't want one, though.)

I always *always* fall for April Fool's jokes, but this e-mail was so over the top that I figured it out pretty quickly.  (Or I am getting more jaded as I age instead of more naive.)

Anyhow, onto the roundup...I have to keep this one very quick as we are headed to Ireland tonight (Rex is off school this week), and I still have to get the carry on luggage sorted.

(BTW, since I will be in Ireland until next Sunday I will definitely not be as accessible as I try to be at home.  We have access to the internet, but I never count on it, so posting this week will definitely be as I can, not as I want to.)

Boden didn't have a "spring/summer trim" this week, again, but there is a little note on the place where it normally is saying that they will offer it for sure next week.  In its place is the continuing mini Boden/Johnnie b. sale instead. 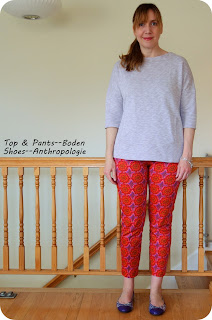 Bistro Crop Trousers and Off Duty Sweatshirt.  I entitled today's post "fit follies" because I had the most ridiculous time trying to get the right size in these pants.  I had originally purchased the size 8 long and 10 long way back when these debuted in January, but was put on a very long backorder.  Eventually both showed up and I was pretty excited that one of them would work for me.

Then I tried them on, and was met with a pair that was a touch too small (in the waist--nowhere else) and a pair that was way too big EVERYWHERE.  I couldn't believe it.  Sigh.

I thought I would end up keeping the size 10 long, because I figured I could use my sewing machine to take the pants in, but I ended up not doing that, and instead kept the pair you see on my above, the 8 long.

(The off duty sweatshirt was reviewed here, btw.  Still love it, and still very glad that I kept it even though it was a size too large.) 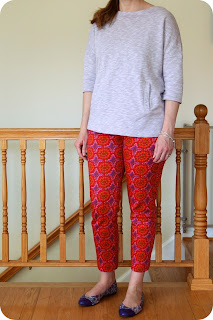 Here is another view of the outfit.  You can see that the overall look works.  There is a lot of print here, so you have to be into color and pattern to want these, but based on how well they are selling, I guess I am not alone in my love of them.

Love the length, just two inches above my ankle, had I bought the regular (which I would never do, btw) they would have been way too short.  If you are short enough you could buy the long and have regular length pants, if you so desired. 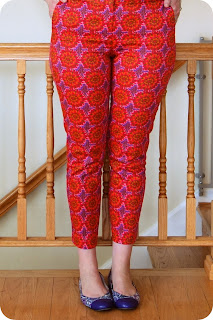 Just the trousers.  Because these are made from a stretch cotton sateen, they gave throughout the day and were very comfortable.  So even though they were a touch too tight in the waist, the rest of it felt wonderful.  I also noted that the day I wore the pants they fit better than the first day I tried them on, which may be due to the fact that I was bloated (ladies, you all get it, right?). 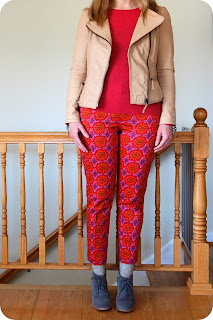 This is the size 10 long.  I had to take the back in by a whole three inches (I used a diaper pin) and it was still a bit too big.  The difference between the 8 long and the 10 long is about 3.5 inches in the waist.  I sort of wonder if I received a mislabeled pair (either the 8 was actually a 6 or the 10 was actually a 12).  Anyhow, had I worn these 10s the whole day, I would have spent the whole day hitching them up, which I hate hate doing.  After this photo was taken I took them off and decided to wear these pants instead.  (The photo above was from the day I was feeling bloated and the 8 felt a wee too tight in the waist.)

The other Boden bit of this outfit, though, held up well.  Effortless Suede Boots 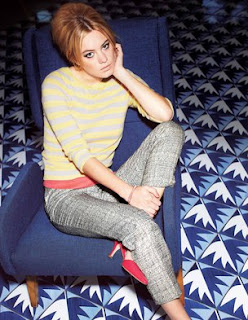 Bistro Crop Trousers (use link to open page) and Off Duty Sweatshirt.  Stocks are getting low for the off duty sweatshirt, especially in the smaller sizes.  The trousers are still on this ridiculous backorder.  If you want the 10 long, I will sell it to you at the price I paid (plus shipping), but bear in mind I can't send it till next week. (I can be reached at dinagideon AT aim DOT com.)

Breton Sweatshirt.  I wore this one with a pair of floral pants from J. Crew.  I love this sweatshirt as much as I love the off duty sweatshirt, except I decided on buying it in the right size this time.  :) 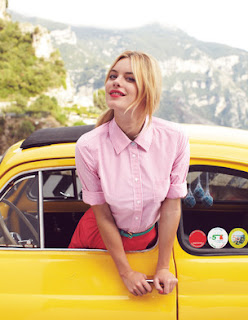 The Shirt (use the link to open the item page).  The lovely Joanna is a big fan of this shirt, especially all of the darling details it has.

Colourblock Points.  Every time I see Lou wearing these, it makes me want them even more, and I am not normally a fan of colourblocking OR ankle strap flats.  They look that good on her!

Adelaide Dress.  I have this dress and yet I have still to wear it.  Lou reminds all of us this dress can be winterized, and successfully to boot.  If it doesn't warm up by the time I get back from Ireland, I will definitely be trying that look, too!

Pique Mini.  Egyptomaniac shows off a pretty and professional look while wearing the golden version of this skirt.

I hope to talk with you all soon, but until I can, thanks for visiting!

Below is the current coupon from Boden:

Posted by dinagideon at 3:31 PM