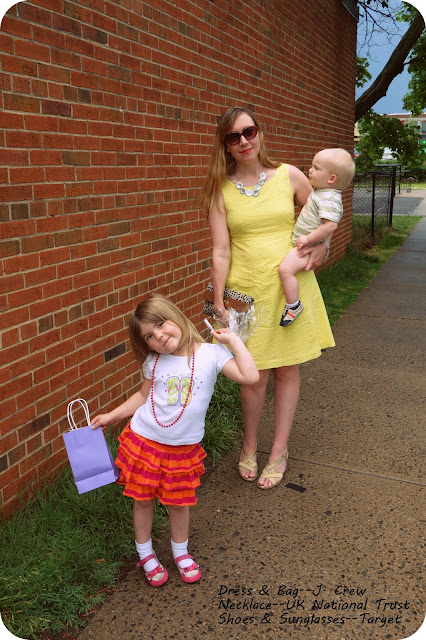 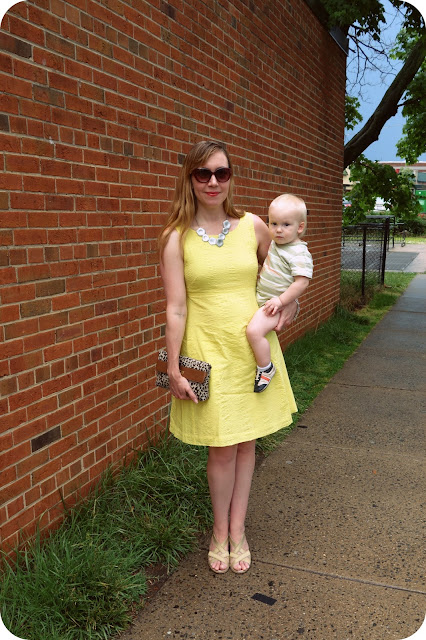 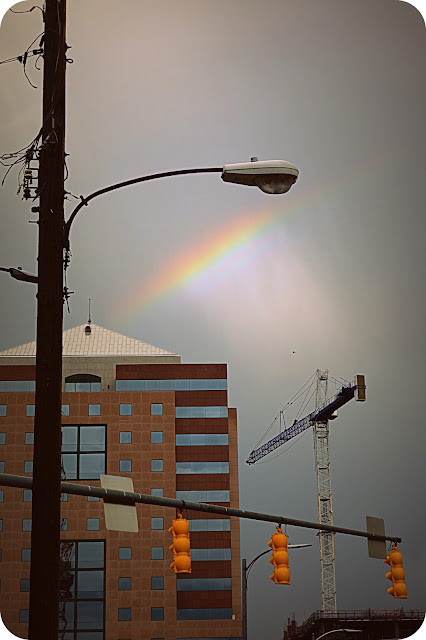 Where:  7000 kids' birthday parties followed by a trip to a Moroccan restaurant.

Ease of Wear: (4 of 5 stars--5 being the most easy to wear.) This old school J. Crew dress (embossed cotton/seersucker fabric that they don't use anymore) is awesomely comfortable.  I especially love that it fits nicely through the bodice but is slightly flared at my hips.  :-)  One of the best pear-shape friendly dresses out there!

One point off because the Target shoes pinched a tiny bit (first time I had ever worn them).

Cool Factor: (3 of 5 stars--5 being the coolest.)   Well J. Crew has stepped away from the embossed cotton, so maybe that is a sign that it is no longer cool?  They did reissue my pineapple skirt, though, so maybe there is hope for the lovely embossed fabric in the future?

The necklace is my favorite bit, though, it was purchased at the Giant's Causeway in Ireland, and if you look closely, you can see that the shapes are taken from the natural stone steps you can see there.

Anecdote from the day:  We were invited to three separate parties for the kids that day.  Originally I was going to take Rex to the pool party for his *girlfriend*, then Mr. Dina would take him to Chuck E. Cheese's for another friend's party, then I would take CW to the SAME Chuck E. Cheese's for her friend's party later that afternoon.  Insane, right?

Thankfully, although sad for Rex, his two friends' parties were at the same time, so he had to choose.  He picked his girlfriend, lol.

The Moroccan food was delish.  Mmm.  Right before we got to the restaurant, it stormed like "woah."  (Hee, Joey Lawrence, hee.)  After the storm passed, and as we were walking to the restaurant from the car, we spied that rainbow you see in the third picture.  I love rainbows, so glad I grabbed the photo. 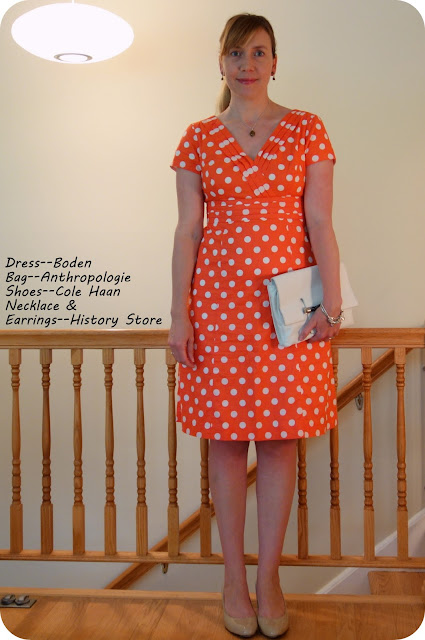 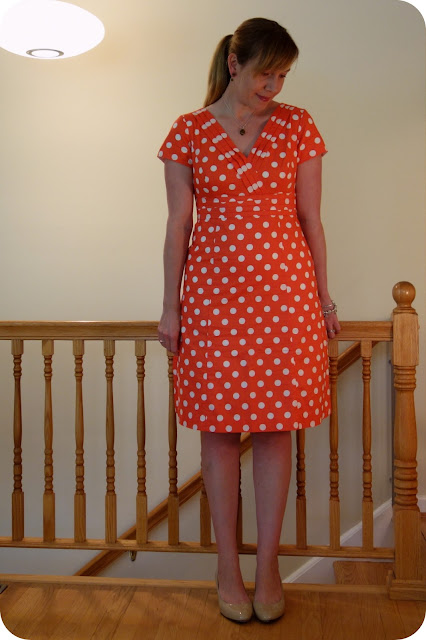 Where:  ???  I know that I was at home with the kids while I wrote the Boden preview picks post, but I know I wasn't wearing this outfit to stay at home.  I must have gone to dinner that night with Mr. Dina and the kids.  That seems right, but it's all fuzzy.  Must write these posts sooner.  ;-)

Ease of Wear: (3 of 5 stars--5 being the most easy to wear.) The bodice of this Regatta dress is a bit large, and the shoulders stand off a bit from my shoulders, so I feel like I have to keep pulling the dress down.  After a while I got used to it, but in the beginning it bugged, so there's why I have the 3 there as a rating.

Cool Factor: (2 of 5 stars--5 being the coolest.)  Hmm.  Well those are really practical nude Cole Haan pumps and a white handbag combined with orange and white polka dots.  Not especially cool, rather pleasantly pretty, exactly right for my lifestyle, I suppose.

Anecdote from the day: Should have one and would have one if I had bothered to write a post on this outfit sooner.  I tell ya... 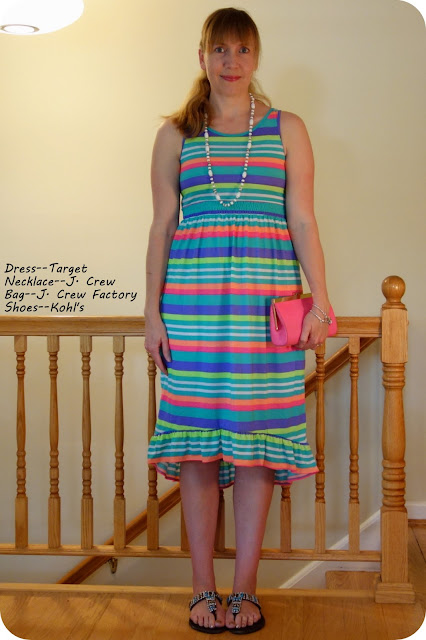 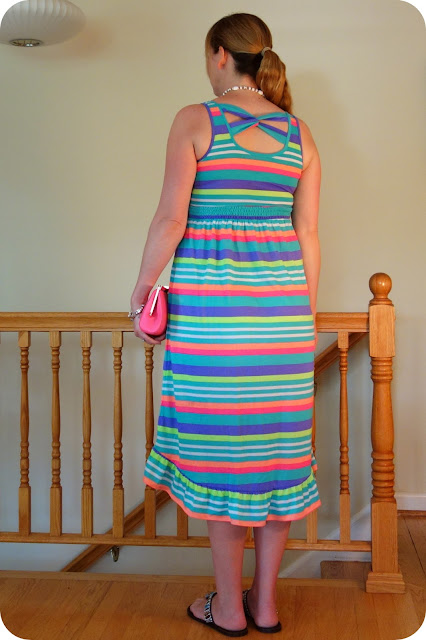 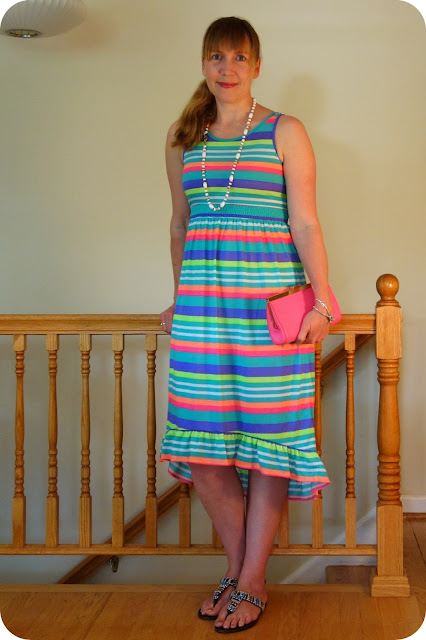 Where:  Winesday at Whole Foods.

Ease of Wear: (4.5 of 5 stars--5 being the most easy to wear.) I dig dig dig this Target (girls!) maxi dress so much, especially how easy it is to wear.  Can't go wrong with a nicely fitted jersey dress in neon stripes with just the right amount of give to be comfortable.

The jeweled flip-flops were very floppy since I bought them before I had the kids when my feet were bigger (???), but it wasn't awful or anything, so only a half-point off for them.

Cool Factor: (3.5 of 5 stars--5 being the coolest.)  Well, I think it is cool, but I suspect the hi-lo hem is "out" or on it's way out, and neon may have played itself "out," as well, but at the Whole Foods, where hemp clothing, Capitol Hill business suits, and Toms are king, I think I brought it that day! 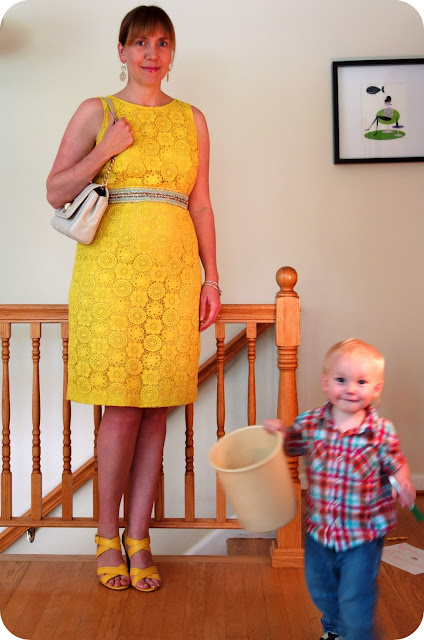 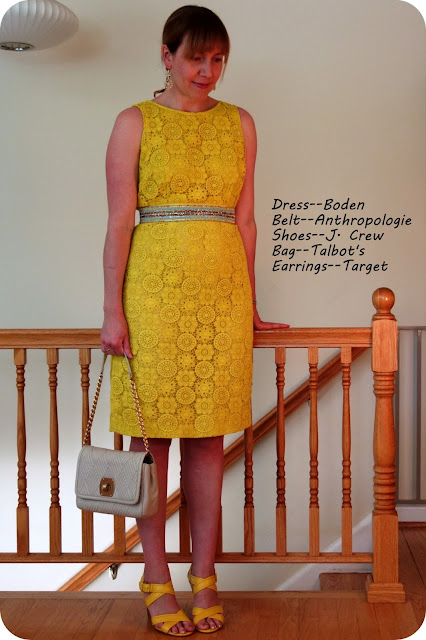 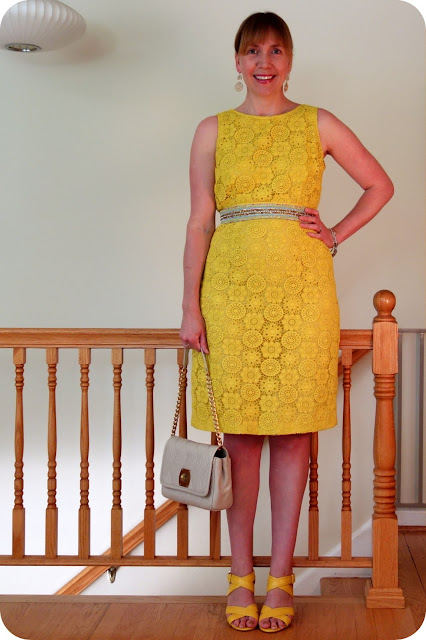 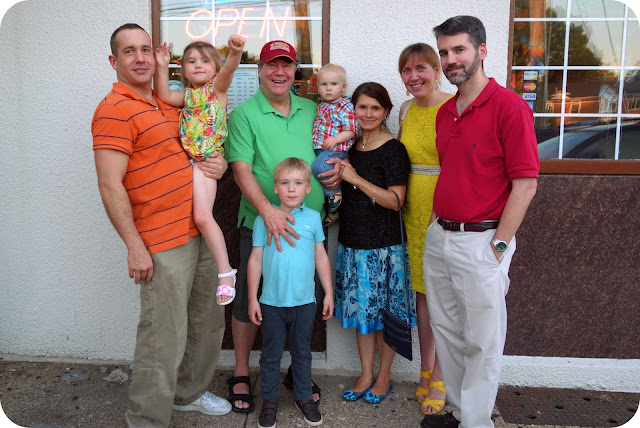 Ease of Wear: (3 of 5 stars--5 being the most easy to wear.) I think this Lace Dress is a superstar, and it is very comfortable since it fits me to my curves (review here), but it is losing points because every. damn. time. I wear it, I snag a lacy bit on something.  Admittedly, my fault, but still...stop being so testy, pretty crocheted lace fabric.

(The one snag I had that day was pretty big, but thanks to the sewing shop ladies, I now know how to fix it.  It requires hand sewing, though.  So nice new machine will be useless for that one job.)

Anecdote from the day:  Oof, what a day.  I finished these pillows for his teacher's wedding present in the morning, visited the sewing shop to buy a new machine (now that I sew nearly daily, I think I have the actual justification for a machine that can do more, including embroidery and quilting--thank goodness for no interest financing), went to the wedding, then back to the sewing shop to tie up some loose ends, then to my dad's to cool down, and then to the Mexican restaurant to celebrate Father's Day.

The last photo shows that my brother and I were enjoying ourselves WAY more than the rest of our family.  We blame the margaritas. 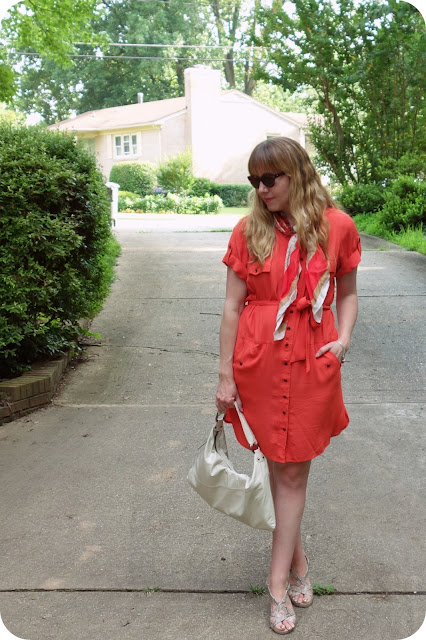 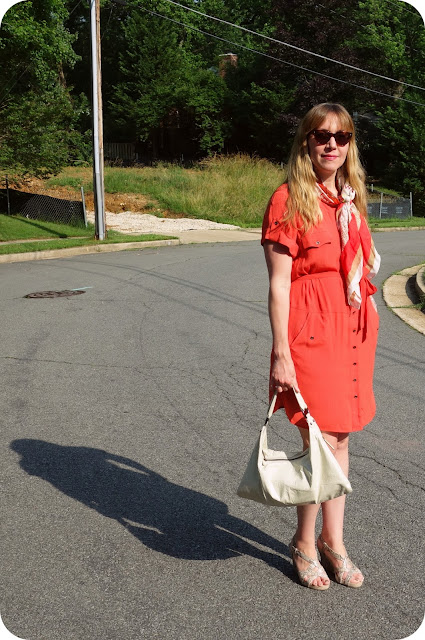 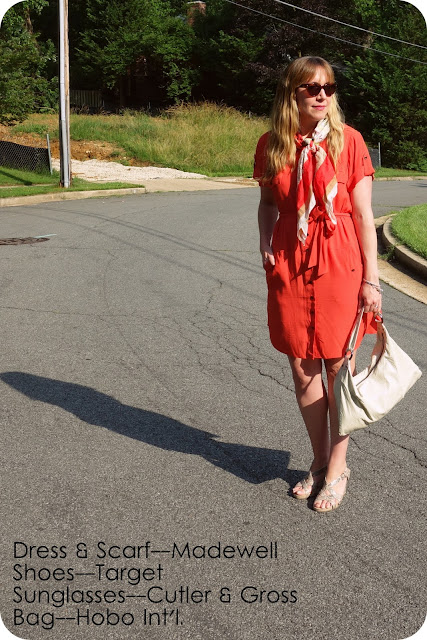 Where:  Winesday at Whole Foods.

Ease of Wear: (4 of 5 stars--5 being the most easy to wear.) This Madewell dress was a postpartum purchase so I could have something loose and nursing-friendly after giving birth to Angus.  It has become even more comfortable as I have lost more baby weight, but not so loose that I look like I am in a sack (thank you, belt!).

Don't adore the fabric, since it is a bit cloying and a bit wrinkle-prone, but I will forgive the dress since I could probably take a red-eye flight in it and feel comfortable.

Cool Factor: (3 of 5 stars--5 being the coolest.)  Hmm.  I think the scarf is tied poorly, should have wrapped it more and in a circle shape...this version makes me look like a flight attendant.

Anecdote from the day:  My hair was so curly that day!  I washed it but didn't immediately comb/brush it, rather I let it air dry and this, combined with the *awesome* (sarcasm) DC humidity created the waves you see.  I sort of dig it, but it was not planned.

Okay, that's it.  Not sure how many folks are reading blogs on a Friday night in June right before a holiday week, but maybe a few of you will peek in?

BTW, Lands' End has a new promo out, 40% off Customer Favorites.  Haven't had a look around, but I have included the link below, as well as in the sidebar. 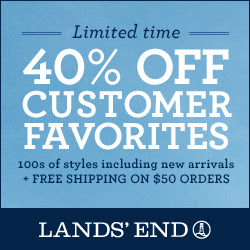 Posted by dinagideon at 5:59 PM