OOTE: Birthday Party and Why I Love Canada. 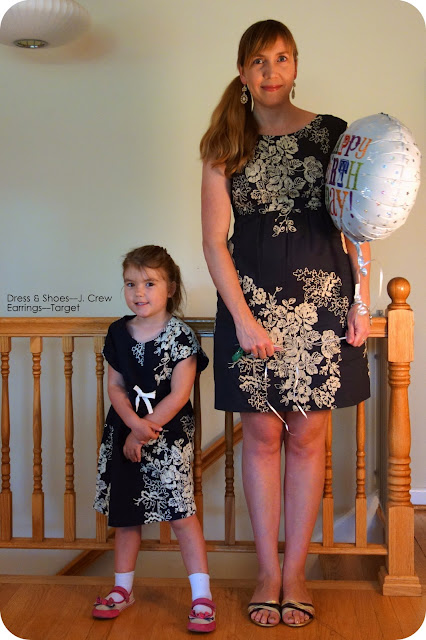 Ease of Wear: (4 of 5 stars--5 being the most easy to wear.)  The Mirabel dress has been taunting me over the past two years since I had gotten pregnant in 2011 and was still too postpartum to wear it in 2012.  I was determined to wear it this summer, so I decided to see if I could fit into it again on Saturday night.  And since CW really wanted to wear her factory version (from the current collection), I was hopeful since clearly my daughter has been on a run of "let's look like Momma" lately.  (See yesterday's post for more proof of that.)

Fortunately, I have lost *just* enough weight to fit into it again.  Now, I am not as thin as I was when I first bought it, but it felt great on and was exactly right for me to play hostess at my "I am getting SO old" party.

Cool Factor: (3.5 of 5 stars--5 being the coolest.)  Simple, great length, with darling embroidery, this dress felt cool and in my mind, looked cool.  The minimalist accessories (barring the balloon, of course) kept things easy and chic.

CW's hair is now long enough to pull back into a high ponytail, so I think she looks really cool.  But I am biased, of course.

Anecdote from the day:  Originally I had decided that I wanted to celebrate my continuing aging by inviting a bunch of female friends over and having "festive" drinks, which depending on the friend either means wine or sparkling orangina.  (Guess which festive drink I prefer...)

But as the numbers came in, it became obvious that only a few women could attend (thank you so much America's birthday holiday week) so I decided to turn the party into a bbq with husbands and kids invited, as well.

It was wonderful, but check out these numbers.

Okay, so since it is my birthday today and since I get to share it with both the wonderful Gigiofca* AND Canada's Canada Day, I thought I would make a list of things I totally {heart} about Canada.

(I have only been to Canada once, btw, in 2004, for one day, and to Vancouver.  I know this seems ridiculous for me to love this country so much--but I don't care.  I still love it.  My husband says my obsession with Canada is only eclipsed by my obsession with clothing.  Har-dee-har.)

I had intended to start this list last July 1, but the Derecho got in my way, and (haha), I lost the wind in my sails to get it done, even late.

1. Rush.  Did you expect I would have written something else first?  And let's be honest, I will admit to loving "In the Mood" which is from their first album and totally LOL-worthy.  But I still LOVE it.

3. Bryan Adams.  I have roped CW into this one since "Cuts Like a Knife" is one of her favorite songs.

5. Survivorman. This guy goes out into remote wildernesses BY HIMSELF, with only a camera, and the barest amount of things to live on...he and the Ice Road Truckers are my personal heroes.  Amazing.

6. Love it or List It, and its sister, Love It or List It, Too.  HGTV has a ton of Canadian programming in its lineup, and of all of the Canadian choices, these two are my favorites.  They are formulaic and I think probably "fixed" for the ultimate "drama" every episode, but I can't help but be on the edge of my seat every time...are they going to "love it," or "list it?"

7.  Fifteen.  Please please tell me someone, *anyone*, out there reading my blog watched this show in the early 90s and remembers both Todd Talbot and Ryan Reynolds from this "so bad it's 'awesome-ful'" show on Nickelodeon?  I would love it if they were to issue all of the episodes on DVD.  I would 100% buy it and re-watch every single episode.  Multiple times.  (My brother would join me, he loved the show, too.)

8. Gordon Lightfoot.  No, I am not joking.  I adore it when his music comes onto Sirius Satellite Radio's "The Bridge."  My fave song?  "The Wreck of the Edmund Fitzgerald."

My dentist *hates* that song.  It was playing while I was having my cavity filled and I told him it calmed me down, and he was all, "glad to hear it, because I hate that song."  Well, then.

9. Metric.  Their "Breathing Underwater" song is lovely, pure and simple.  CW and I sing it so much that Angus can sing it, too, albeit in his own special, "I am only 1-year old" kind of way.  It is more like "Aww ah AW, Oh-oh, oh-oh, oh, ohwwww!"

10. All my Canadian friends, in real life, and in the blog world.  You all rock, seriously.  Sweet, kind, thoughtful, and pleasant.  I would even bear the terrible temperatures (well, maybe for a week, let's be real here) in winter to spend time with them.

There are items not on my list, but I will make sure to add to it next Canada Day.  I think I need to keep a word file for my list of things I love about Canada.  ;-)

Happy Canada Day, everyone!
Posted by dinagideon at 10:33 PM