Made by Me Files: Mini Wardrobe Pieces Four, Five, and Putting Them All Together.

I also could have entitled this post "I MADE LEGGINGS, you all!"

But that seems super lame, and unless you sew, you may not realize that making leggings is actually kind of a hurdle to pass through.  But more on that later.

First, before I begin, I wanted to let you know that a ton of great Boden reviews have been coming through the Boden Reviews tab here at the blog, I have seen some great reviews at other friend's blogs, and I have received a few messages, too, so I am very excited to get the next roundup started, tomorrow am.  Bright and Early.  The children willing, of course.  ;-)  CC, ever the best blog friend, commented on the last blog post and let us know that you could use the code 4Y4D to receive 20% off.  Thank you, CC, for the code.  If you have a review you want to send this way, you can email dinagideon AT aim DOT com or leave a review at the Boden Reviews tab, whichever is easier for you!

Okay, onto the mini wardrobe conclusion.  Reminder, the first post on this (pieces one, two, and three) is here. 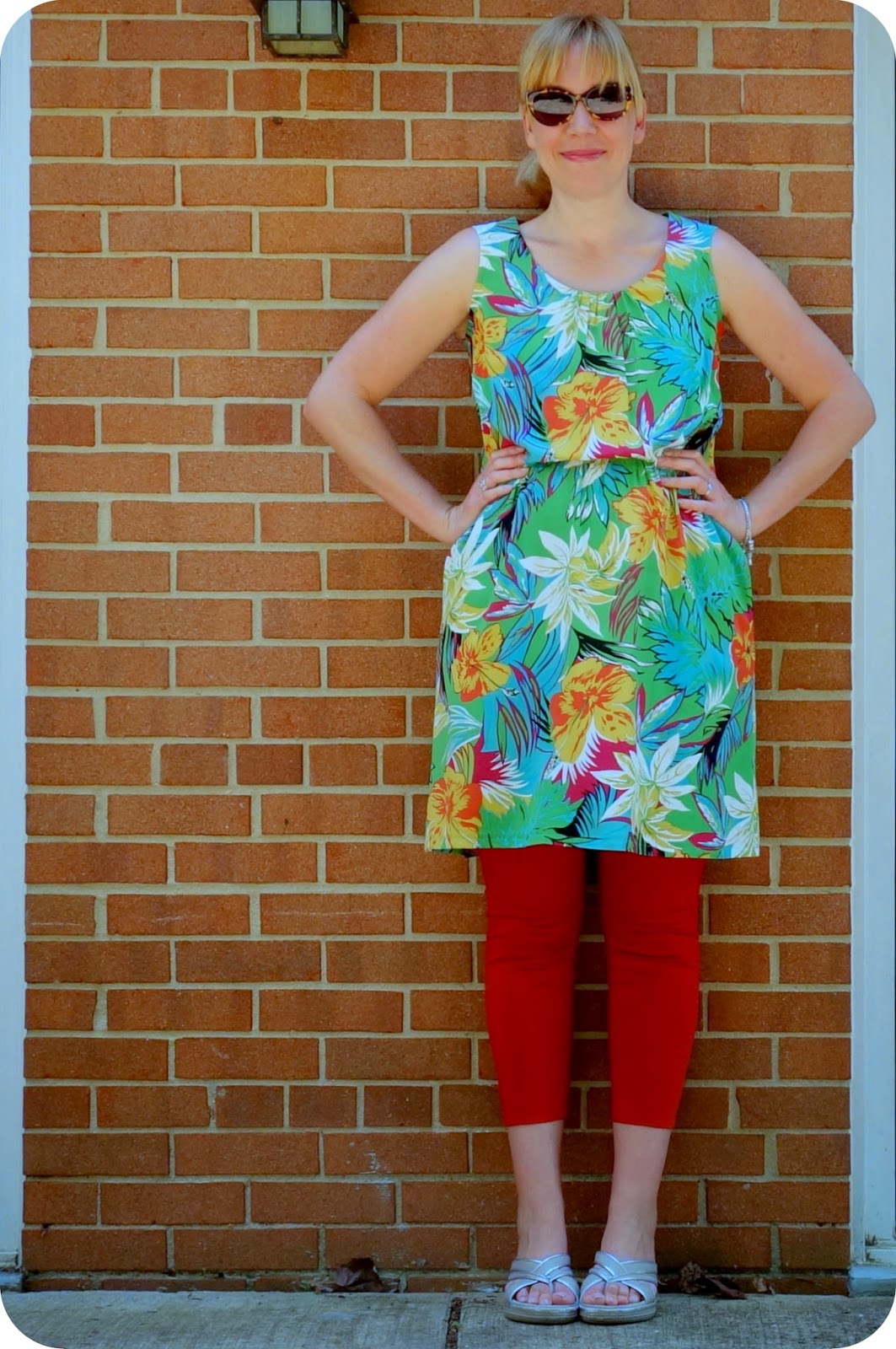 I struggled a bit trying to figure out what the fifth and final piece of this mini wardrobe was going to be.  For a hot second I considered a cardigan or a scarf, but wasn't really feeling either of those since I really wanted this to be a true summer wardrobe.

And although I don't make it a regular practice of mine to wear leggings in summer, because DC HOT/HUMID/UGH, but I also have been known to wear the shorter variety with a long tank or flowy linen blouse under the right circumstances.  So that's when it hit me, make the leggings.

I knew that making them was on my bucket list of things to make since I love them, need them, and don't really love paying over $30 for the good ones at J. Crew, which only ever come in black/grey/navy, anyhow.  And the cute colorful ones at Target are (forgive me, Target) crap. 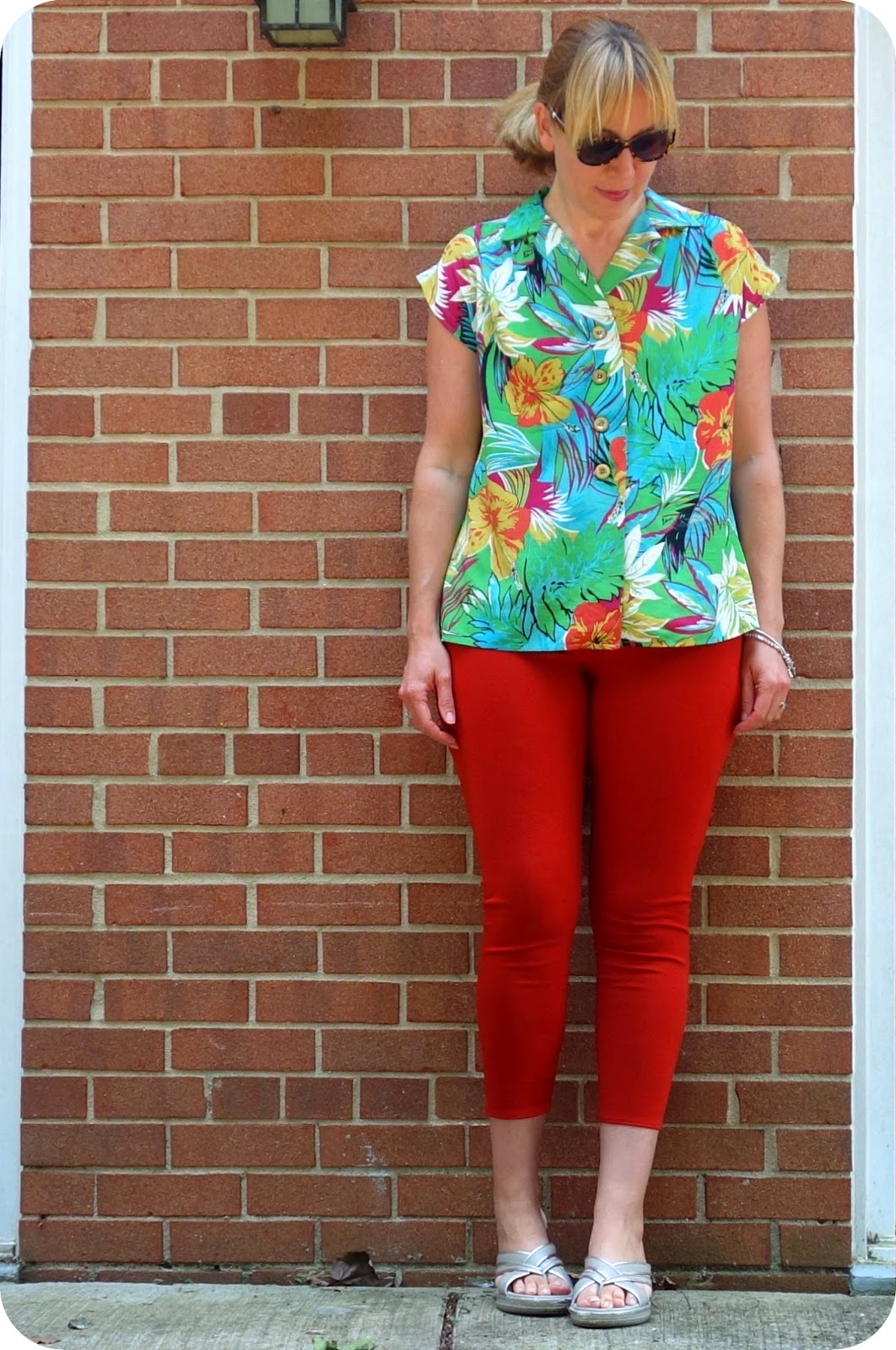 Thing about sewing leggings, or any fitted knitwear, is that you have to sew them sew that they fit with *negative* ease because they are meant to stretch.  That means the flat pattern is significantly smaller than my measurements and if I were to have sewn these up in a woven material, they may have fit CW well.  ;-)

Add to that the fact that while you can sew these up on a regular sewing machine (and bits of this were sewn up that way), it is really great to have the serger on hand to help with sewing the knits up as the way the stitches and loops are formed on it make the seams super stretchy and means that pulling these on and off your body won't bust the seams of the garment.

Serging also makes this project super fast.  Of course if you *accidentally* sew up the front leg pieces to each other instead of sewing the front of the leg to the back, you will have a LOT of seam ripping to undo.  Not that I made that mistake, of course.  Cough, cough. 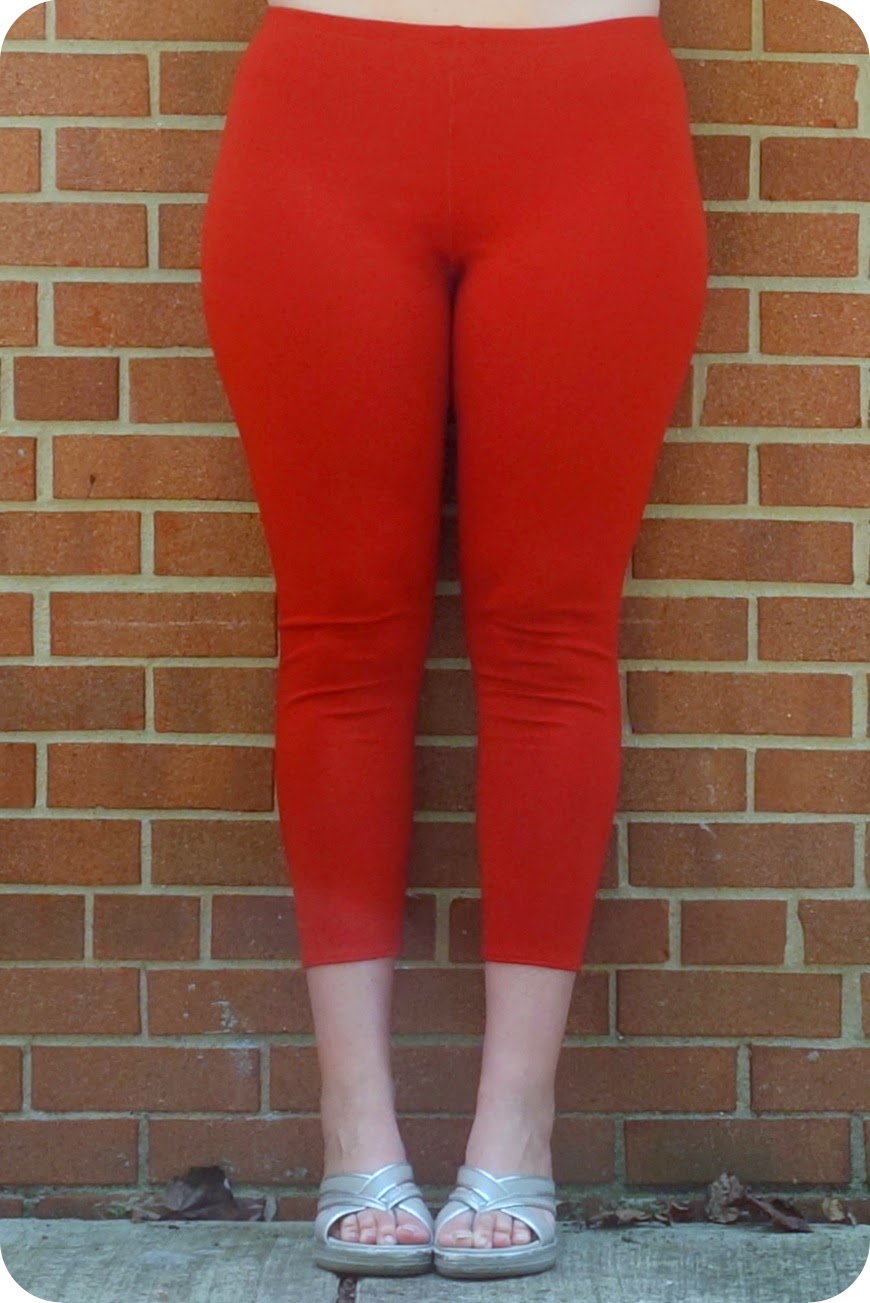 This is not necessarily a great first project for a first time sewer, but if you really are digging sewing, and want to make up some actual functional leggings that fit really well (even over my very curvy hips!), this Kwik Sew pattern (3636) is a wonderful jumping off point.  Every bit of the directions was excellent, and I did everything suggested by them.

Although most of my information on this pattern is at the review at Pattern review (link at bottom of this post), I highly recommend checking out this link as this sewing blogger has a good review of how she made her leggings.  Here, a fabric store in Australia wrote up a great post on the waistband application that is pretty much the same as what Kwik Sew wants you to do.  I did as asked, and it sewed up very well. 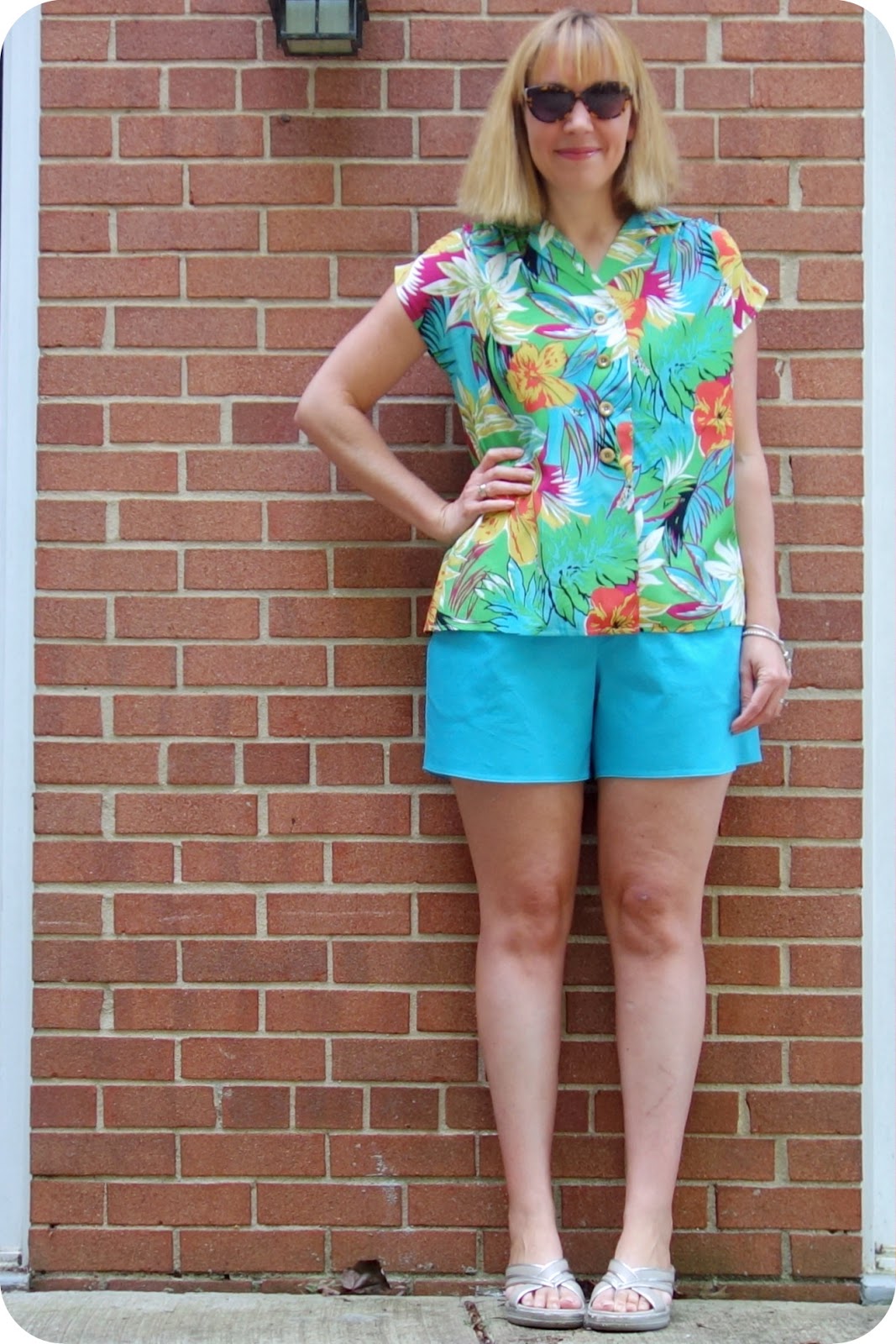 This is a button-up loose fit blouse that I sewed up using a vintage (kind of) pattern from 1979, Vogue 7088.  I was gifted this pattern by a sewing teacher, and was waiting for the right fabric to sew it up in (well, I have some Liberty tana lawn, but wanted to wait until I had tried it on something less expensive first).  Anyhow, knowing that I would want to use the Tropical Print Rayon Challis I bought from Fabric Mart, I also needed a pattern that would look equally good with shorts, leggings, and a dress.  I knew that if the top was too tight, then I couldn't wear it over the dress, and it would be comical with the leggings.  I also knew that buttoning up the blouse would help with wardrobing options (layered over a cami gives it a different look that buttoning it up).  So that is why I chose this one, it is long enough and loose enough to wear with leggings, breezy enough to wear with shorts, and versatile enough to not look super silly with a dress in the same pattern. 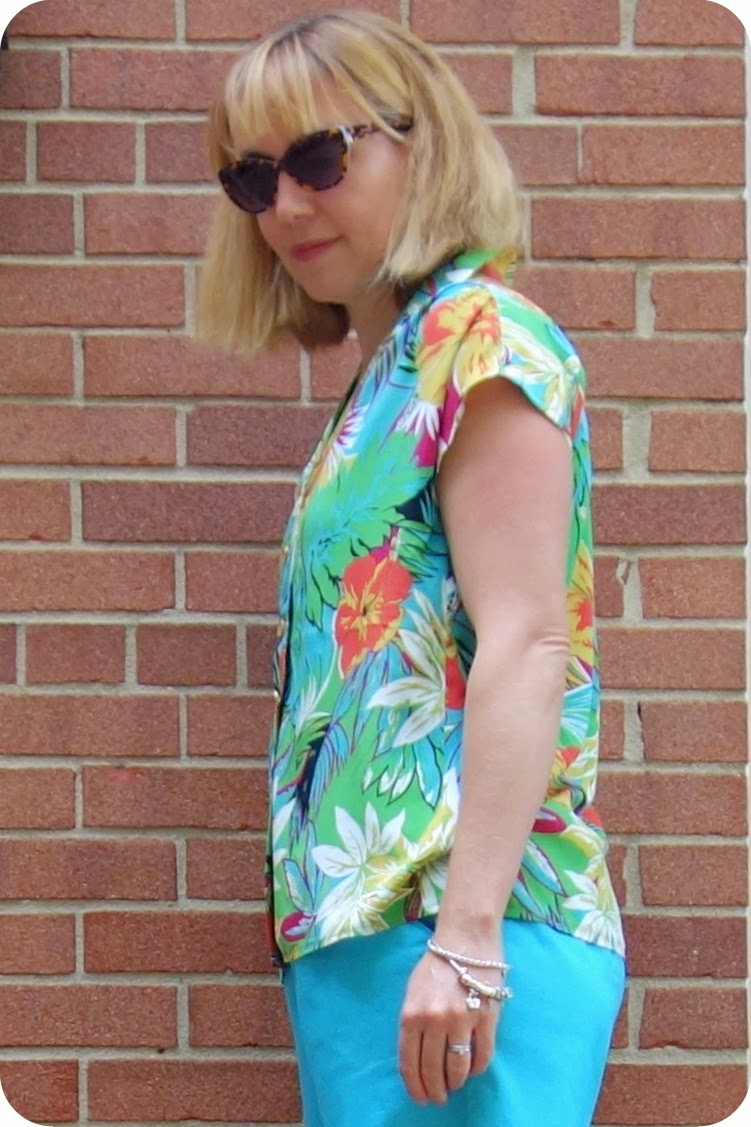 This blouse probably took me the longest to sew up of all five pieces since the pattern has two front pieces with self facings, a button placket, a collar, a yoke (with a facing, too), and a back.  The front and back pieces have gathered bits, too.

Surprisingly none of this was especially hard.  It may have helped that I sewed up a little boy's version of a Hawaiian shirt before this (for Rex from this Butterick pattern), and a lot of what I had to do for his shirt, I had to do for mine.  So good practice and all. 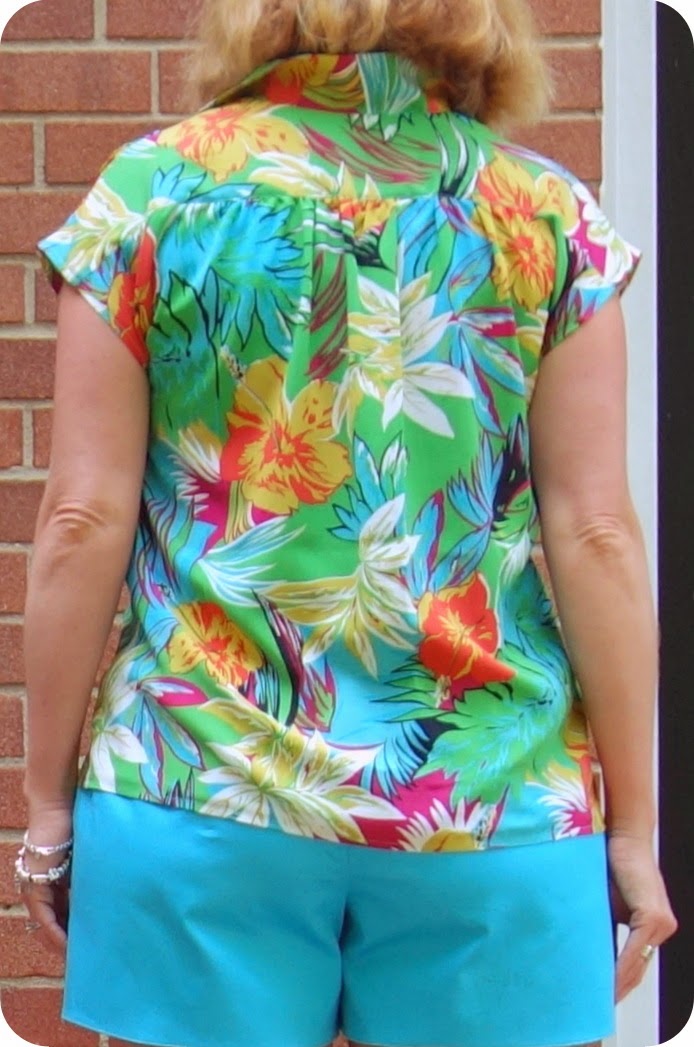 I really like how flowy it is and the gathering at the yoke looks really pretty.  Next time I will add a square shoulder adjustment since I can see the side bits of the sleeves poking up instead of hanging down.  I should just recognize that and do it every time since clearly I am thinking patterns will magically do it for me or something. 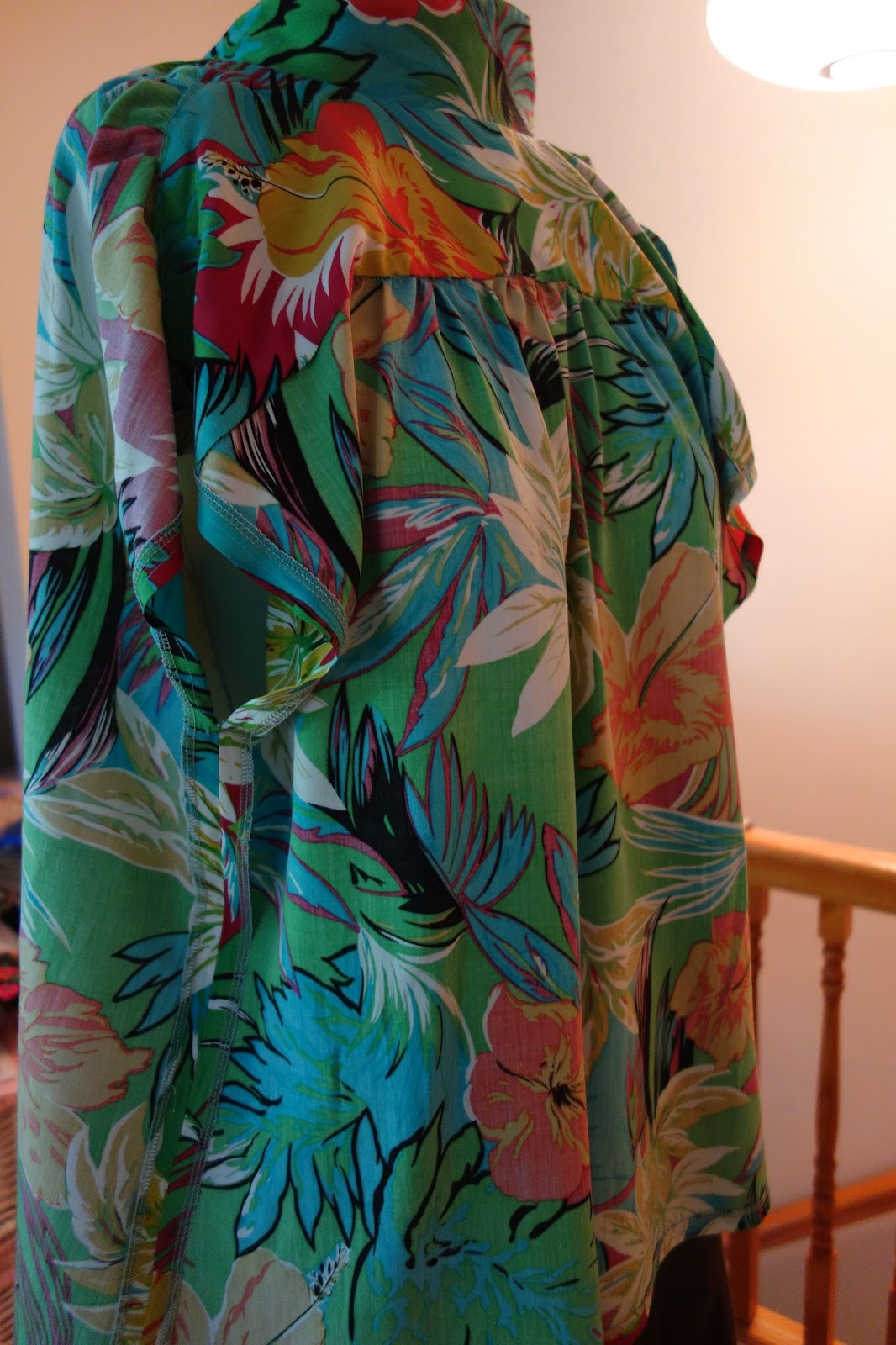 Here is the shirt inside out.  The yoke facing and collar nicely attach to one another.  Provided I take care of this blouse, it should last a long time.  Considering how much I have seen women's Hawaiian shirts retail for, I feel like I did well at around $7 for fabric, $1.50 for buttons, $3 for thread, free interfacing, time consumed (have no idea what to rater $$ for my time), and a free pattern.  :-) 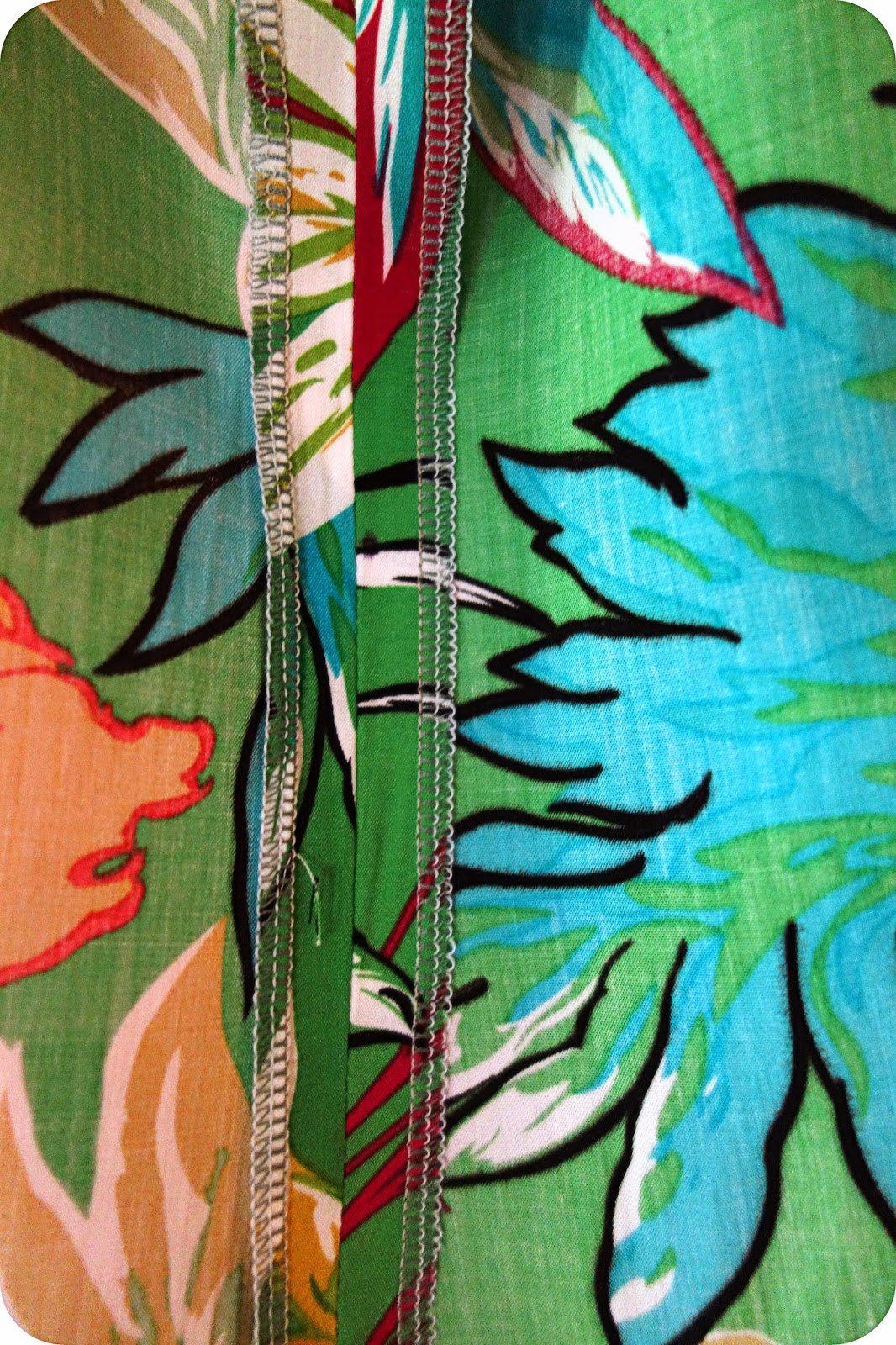 I definitely became besties with my serger with this shirt and the leggings.  I managed to break one of the threads in the looper when attaching the elastic to the leggings, but considering how much I have used it, I would say that is some success.  Yay! 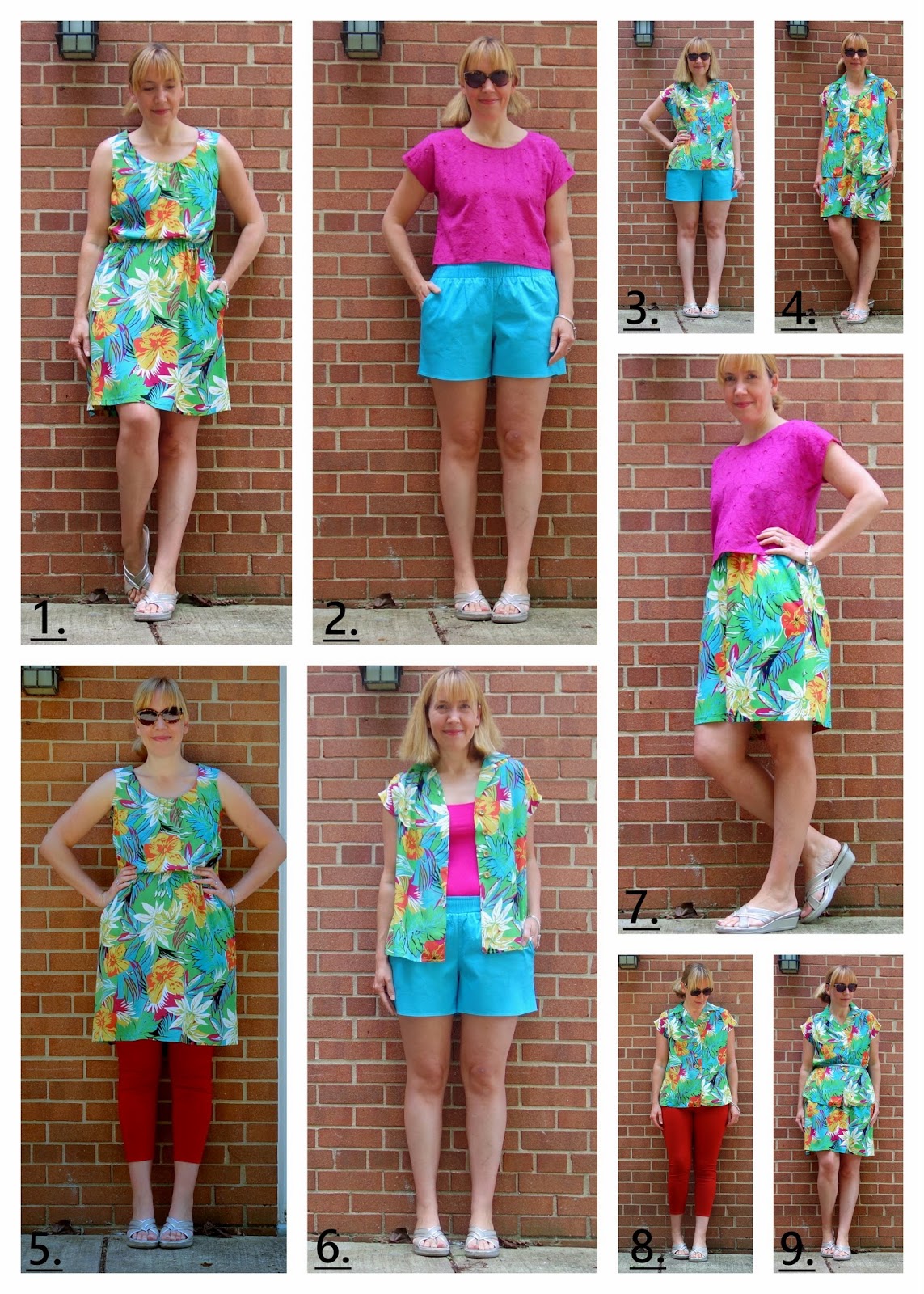 Here are nine possible combinations using these five pieces.  Admittedly # 3 and 6 are similar, as are #4 and 9, but even discounting those, there are seven solid combos here.  I may just bring these five pieces with me on a vacation next year to see if I can actually make this happen for real and under actual strict limitations.  I have worn all five pieces out and about, with the shorts being in the number one spot for most use so far.  I think the leggings will end up winning since I can probably get away with wearing them in the winter here (well most winters here, anyhow, not last winter's freeze fest). 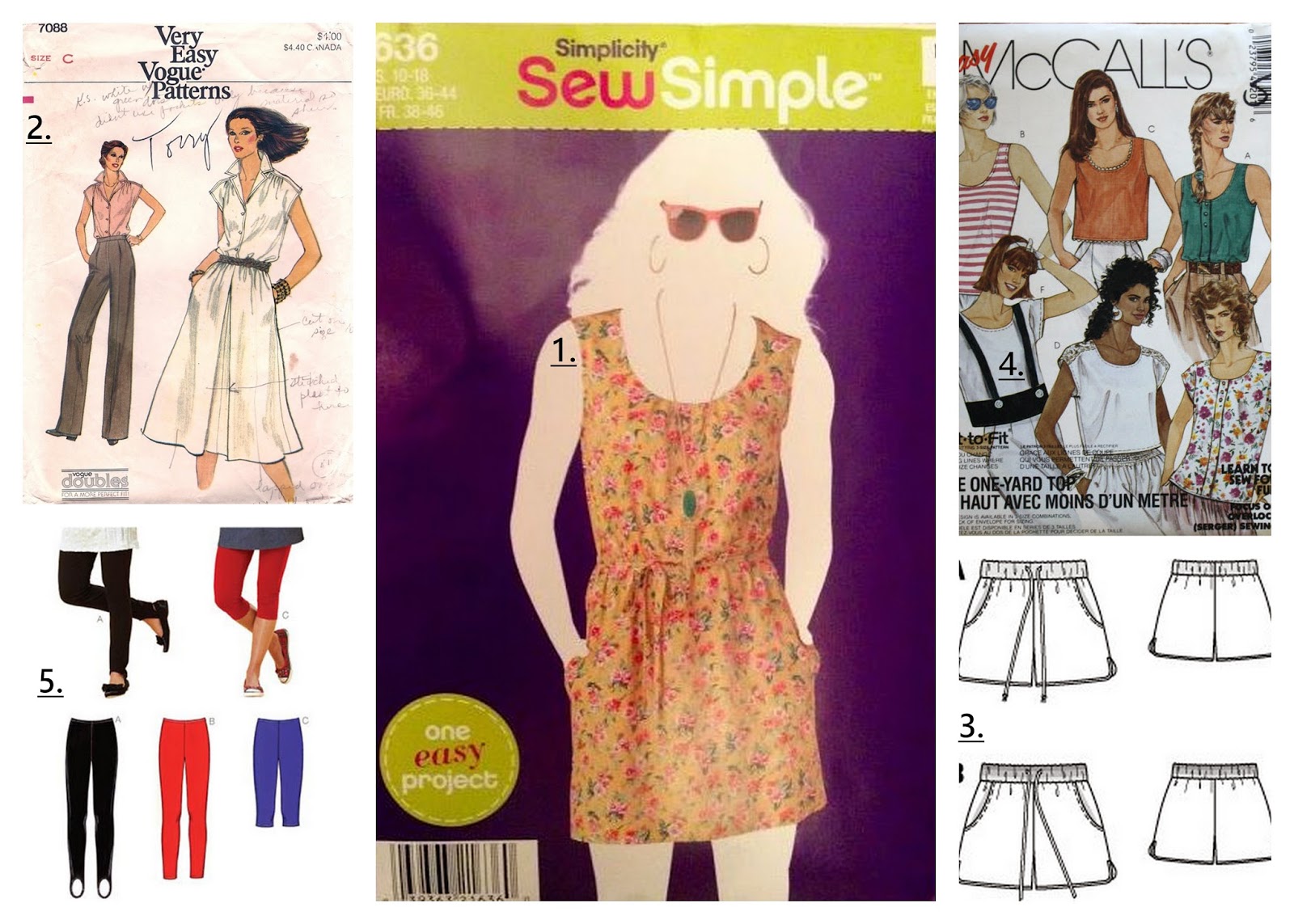 Here are the five patterns I used.

Okay, that's all for now.  I am off to go watch other people sew on Project Runway.

Review of the Kwik Sew 3636 leggings is here at Pattern Review.

Review of all five pieces together for my contest entry is here at Pattern Review.

Have a great night!
Posted by dinagideon at 10:41 PM