Before I dive headfirst into the many Boden reviews I have (most positive, a handful not so), I wanted to get the ootds published from my last trip to Mississippi.  Unlike last year when we stayed there for nearly eleven days, this year was a mere eight total, so I was happy to have far less to pack and to think about. 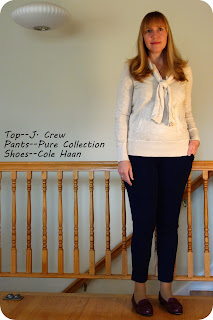 Travel Day.  I love the idea of looking fabulous while traveling, but the reality of flying with three young children means I can't go all "7FAM jeans, button-down fitted shirt, crisp wool jacket, and high-heeled boots."

So instead, I take three lovely and comfortable pieces, wear just a touch of makeup, and fix my hair just so, and am happy when I make it through the process relatively unscathed.  (Which we did--the first travel day was wonderfully easy, for once.) 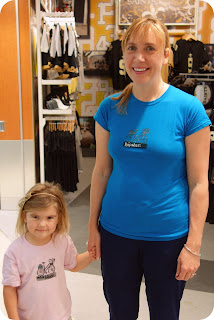 I had read the temperatures in New Orleans would be in the 70s on the first day, so I decided to pack some tees for us to wear once we landed (it was cooler in DC by twenty degrees).  The tees have a hand-printed bicycle (I used a stamp I found at AC Moore), with the words "hipster" and "mini hipster" below the bikes.

I hadn't originally planned to make a tee for CW but she saw me making mine, so she asked if she could have one, too.  I actually like hers better.  :) 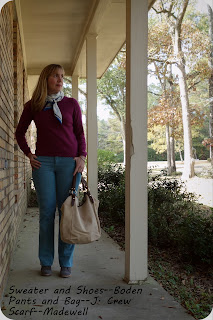 The second day we were there was mild enough to go without a coat, but I knew that a sweater was necessary.  The sweater was reviewed by me here, and I have to say it has held up well, and looks wonderful with a variety of different colors.  Of course, this shade is nearly sold out (as is much over there at Boden).  The Effortless suede boots were my go-to the entire time I was in Mississippi, and I was glad to have brought them.  They are also almost completely sold out, but if you like them, I reviewed them here.

The Madewell scarf I received for a song, as it was a popback sale item with an extra 25% off.  The cords are a wonderful color, and even though I usually stay away from J. Crew pants, I have lucked out this season, since the ones I have bought have fit well and are special and unique. 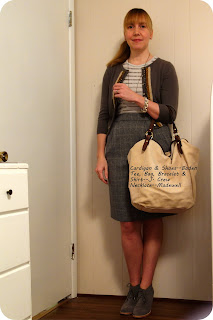 Two days later (didn't get a good shot of the in-between outfit) was Thanksgiving.  We do a very easy midday meal, so none of us ever really "dress" up, but we do at least make some effort.

The collection pencil skirt in windowpane was one of my favorites from the J. Crew Fall lookbook, but OMG, the original price was so expensive.  I can see why they *wanted* to charge that amount, as this skirt is made from the softest virgin wool imaginable, but what J. Crew *should have* done was to mark it at a bit above what they wanted to get for it, and I guarantee they would have sold out immediately.  Instead, the skirt sat in the sale section until it was priced where most of us could afford it.  (And at 30% extra off, at least in my case.)

The rest of the outfit is old, except for the shoes, which I mentioned in the last outfit. 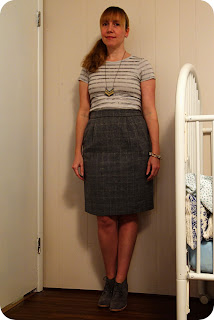 No cardigan in this shot.  I cannot express to you all how much love I have for this tee.  These were from the holiday 2007 season, and I have two of them, this one in silver, and one in a gold stripe.  If I was only allowed to have two tees in my closet, I would immediately grab these two and not look back. 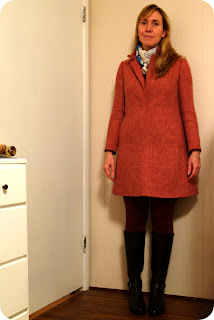 Funny face!  (I love my self-timer, it always catches my *best* moments.)

I wanted to wear the Carriage coat dress again this year, and since I have plans to try it like it was styled by J. Crew (see here), but knew it wouldn't be cool enough to do so down there, I came up with the idea to wear it with lightweight leggings, some black boots, a tank (not shown), and the Madewell storyteller scarf. 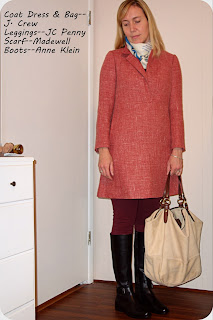 And a bag that holds everything a mother of a baby and two kids might need while at a nice restaurant in town.  ;) 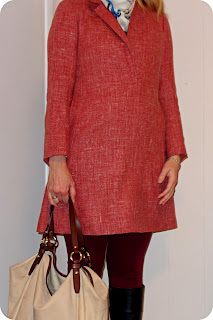 I wore the dress here last, while pregnant, so it is nice to see that even though it fit me then, it still works on me now (although the a-line shape is much more obvious now). 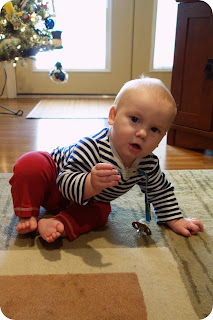 I am throwing this in here because Angus turned 8 months while we were there.  :) 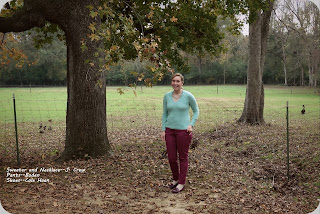 The sweater is the dreaded dream v-neck sweater.  For those of you who are not a JCA, the dream sweaters are dreaded because the fabric pills nearly immediately, usually if you decide to look at it the wrong way.  Now I have no idea how I lucked out, but this year's version in this lovely heathered mint color has barely a pill on it.  Sure, it is a bit "lofty" but I don't need to get out my sweater shaver and I have worn it at least three times since purchasing it (mainly lazing about the house, that's why this is the first time you have seen it on me). 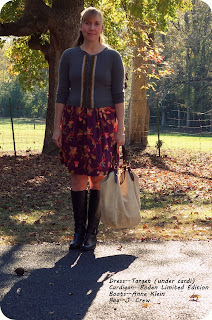 Two days before we left, CW, Angus, and I went to town to get some things.  I love this Liz Lange nursing dress, especially since the colors and pattern seem right for fall festivities, but I wanted to see if I could make it work as a skirt with a buttoned up cardigan.  It almost works, barring the bit of dress you see poking out of the top of the cardi.  (I wore it last here, more traditionally.) 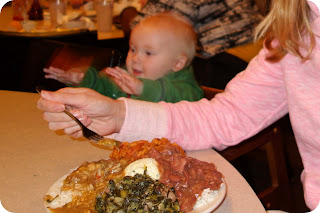 I didn't really grab photos of the outfit the day before we left or even the day we left, but I did ask Mr. Dina to grab a photo of the food I ate at Mother's.  Now I know that this food looks kind of gross, but WOW, it certainly doesn't taste like that.  In fact, as much as I enjoy cooking Cajun myself, and have done so for years, the food at Mother's is my personal holy grail, and if one day I can manage to cook a jambalaya like Jerry's jambalaya (my fork is pointing to it), I would be exceedingly thrilled.

I also kind of dig what Angus is doing there in the back.  Any quotes? 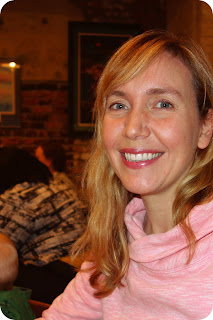 Since I knew I wouldn't get a photo of the last day's outfit, but I really dug the sweatshirt I was wearing, I wanted you all to at least see that, so Mr. Dina grabbed this shot of me.  It is from JC Penny's and looks and feels way more expensive than it actually is.  I liked it so much that I went ahead and grabbed it in heather grey on Black Friday (it was almost half-off, so cheap went down to insanely inexpensive).  I am wearing this in a small, and I would say it fits well (I wear a size xs in J. Crew for reference).

Okay, that's all.  Will be back later tonight with more.
Posted by dinagideon at 6:08 PM