Hi, all!  Good Saturday night.  As some of you already know, I am married to a huge Saints fan and when he found out that they would be playing Philadelphia tonight against the Eagles in one of the four playoff games this weekend, he knew he would be making the trek.  Had this been an afternoon game, he would have headed up to Philly without us, but since it was a night game, he decided we should all make the visit.  Hmm.  I am a bit road-weary after having spent the last two full weeks in Mississippi and Louisiana, but I am always up for a trip, so I once again packed up our things, packed up the car, and traveled again.  :-)

Since it is a very small visit, I only packed one pair of pants, two tops, one pair of boots (hello NE snow--Philly has so much more than we got back home), and the usual pjs/undergarments.  Both tops are new items, today's is the Vintage Sweatshirt in Metallic Triangles, while tomorrow's will be the Lace Peplum top.  Both are from J. Crew, which is a rarity these days, since I have all but sworn off most of their offerings, but if something piques my interest and goes way down in price, I may nibble here an there (which is what happened with both of these tops).

Okay, so the ootd portion is first followed by the review. 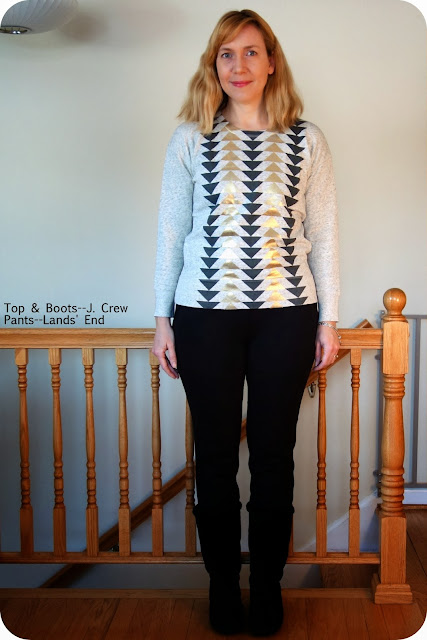 Where: Trip to Philadelphia and the Please Touch Children's Museum.

Ease of Wear: (4 of 5 stars--5 being the most easy to wear) The whole outfit was very comfortable, the pieces being just tailored enough, yet still stretchy.  I dinged the outfit since I hate cold and I hate what the extra coat, hat, and gloves brings with it--extra stuff to carry (coat), extra bad hair days (hat), and the very real possibility of losing one (gloves).

Cool Factor: (3 of 5 stars--5 being the coolest--for both outfits.) Nah, not cool.  The sweatshirt is very cool, but it seriously has to be part of a much better look to really be cool.  Maybe one day, in the warm spring, with a pair of tailored shorts, a pair of lovely heeled wedge sandals, and a cute fedora.  Maybe then...

Anecdote from the Day:  My friend suggested the Please Touch museum.  It was $85 for us all to go in, which is wince-worthy since that is a lot of dough for a few hours.  BUT--it is (by far) the BEST children's museum we have visited, and we have been to quite a few (Richmond, Greensboro, Charleston, i.e.).  The Alice in Wonderland exhibit alone smacks the butts of the other museums, but there was so much more to it than just that exhibit.  If you have kids in their early years, trust me, make a visit to this museum if you can.

This sweatshirt is lovely.  For a while J. Crew was issuing some awesome graphic tees (most noticeably in the 2008-2010 years), but now it seems to be designing some pretty awesome sweatshirts.  Now I *know* I can replicate this exact look with an off the rack sweatshirt and some gold and grey fabric paint, but I also *know* how long it would take to exactly line up the graphics and then precisely and carefully print them onto the surface (a long, long, long time).  So I chose for J. Crew to do it for me and at 30% off, I knew the amount of money spent was probably equal to my own time that would be spent doing this project on my own.

The foil printed triangles are beginning to show signs of wear at the bottom hem since that is very stretchy (made from a ribbed material), but it also makes the sweatshirt look a little more worn, and I kind of dig the well worn tee/sweats look when going for a more casual look.  I tend to look overdone and precise everyday, so a worn sweatshirt takes me away from my typical "Stepford" wife look that I know I can veer into far too easily.  That doesn't mean I condone the foil printing wigging out so early, since it means the design team forgot about that and it makes me concerned since it should be obvious that this kind of fabric printing will lend itself to that.  I personally would have only printed the triangles on the non-ribbed fabric (the main body), but that also means that the line of triangles is broken.  Anyhow, just something to watch for...

The shoulders are dropped, but not a big deal for me since I like having extra interest at the shoulder line as my shoulders are rather narrow.  If you do have broader shoulders, this may not work for you.

I think I like the vertical print since it visually elongates my torso, which runs short.  I have always like how women with longer torsos look and this sweatshirt gives me that look.  So yay for that.

Anyhow, that's enough.  Hope that helps someone out there!

Should be back tomorrow with the ootd and review of the Lace Peplum top.
Posted by dinagideon at 9:45 PM