Hey, all!  Happy Monday.  If you have today off in honor of Martin Luther King, Jr., I hope that your day off has gone well.  We have kept it fairly sedate here, but sometimes sedate is the best kind of day.  :-)

Anyhow, onto the outfits from my recent days.  (I have some from earlier last week, but these three "go" best together.) 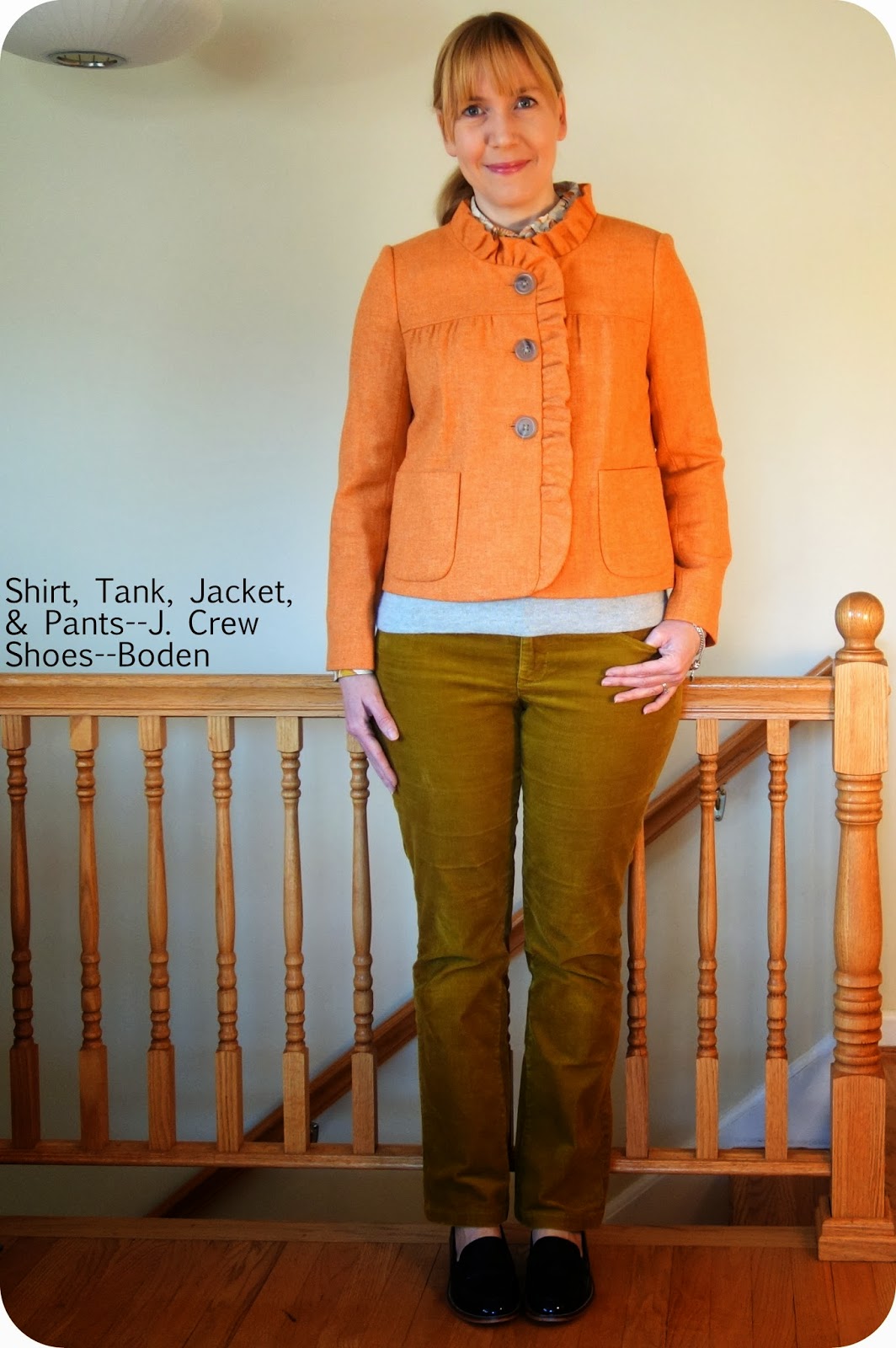 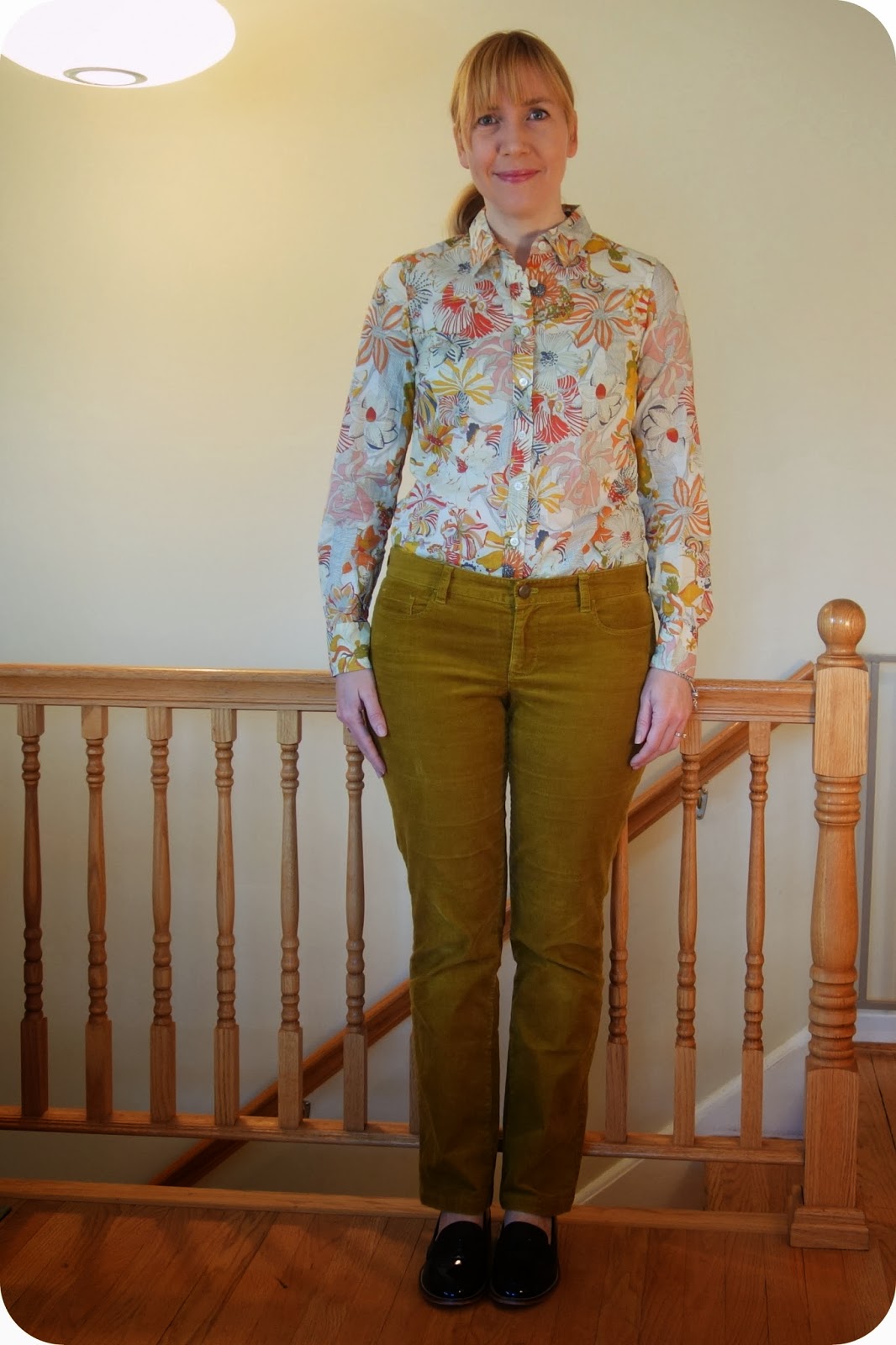 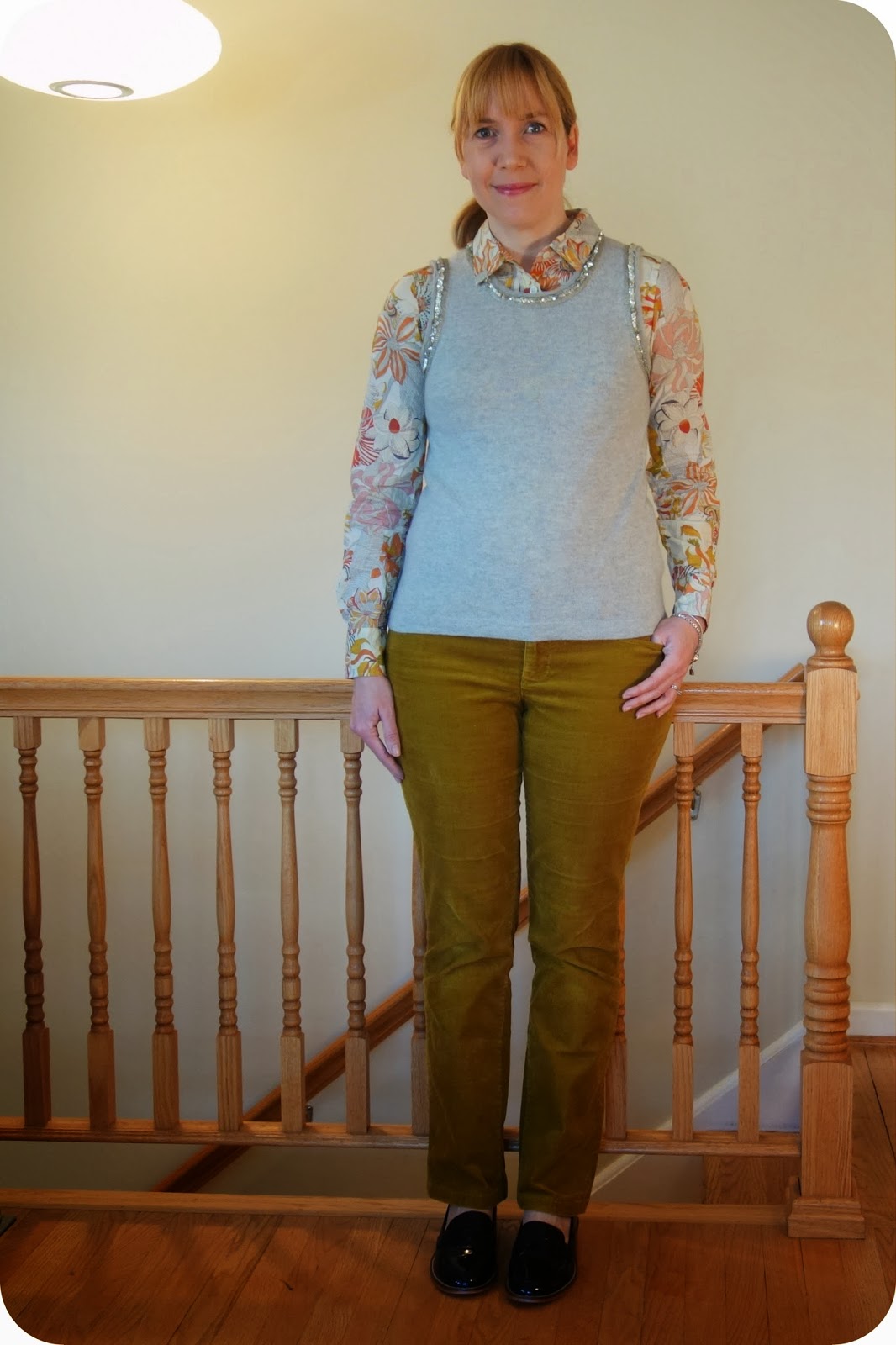 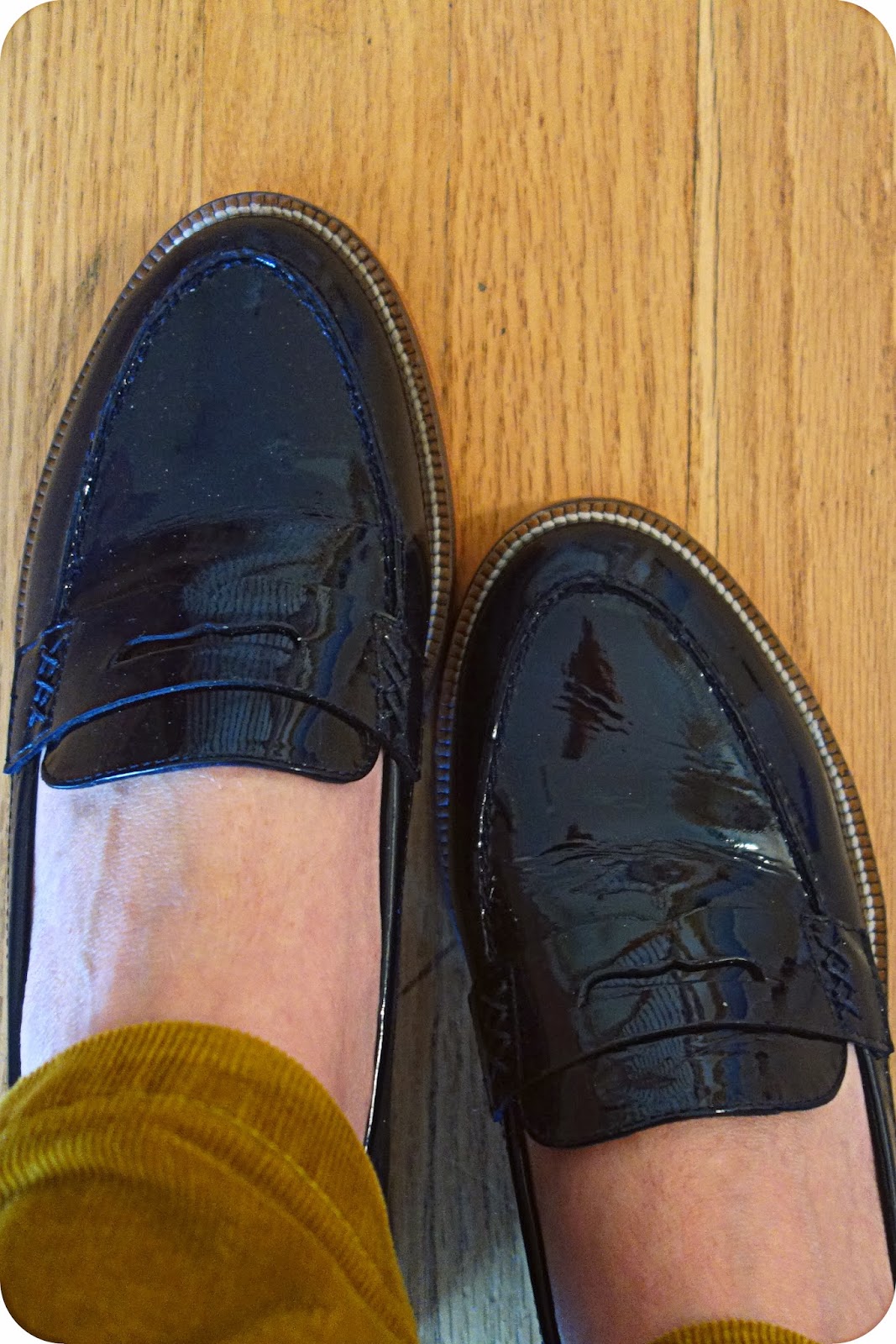 Ease of Wear: (4 of 5 stars--5 being the most easy to wear) The pants are now kinda big, but since I am a big fan of comfort, especially when going to the Little Gym (all three kids had classes that afternoon), I keep the "they're just a touch too big" pants just for that purpose.  I wish that they wouldn't have that weird whiskering at the crotch area, but any pair of pants is going to have that, *unless* you get the exact right size for your body.  And I can tell you from all this sewing experience I am gaining, that even if you sew the exact right size for your shape, that still doesn't mean anything, you could still end up with weird lines everywhere.  Sigh.  (Even really loose pants will whisker if you put your legs together, you will have very deep frown lines radiating from your crotch.  LOL.  That sounds funny.)

The rest of the outfit was super comfy, and even though I don't wear the Fiona jacket that much anymore, I am glad to pull it out once or twice a year since it is so pretty and warm.

The shoes are the Penny Loafers

that I just received the day before.  It took me less than twenty four hours to pull them out and wear them in real life.  Yep, like I feel about all my Boden loafers, it is love.

Cool Factor: (3 of 5 stars--5 being the coolest--for both outfits.) This is a pretty preppy outfit, so I think in some circles it would be cooler than in others.  Fortunately most of you who read here seem to like this brand of preppy, so I think there will be a few fans of this look.  :-)

Anecdote from the Day:  I went ahead and purchased a class at G Street that starts this Saturday (the 25th) on drafting a pants pattern to your exact measurements.  Maybe, just maybe, I will eventually have a pair of pants that have no whiskers, at all.  (Crosses fingers!) 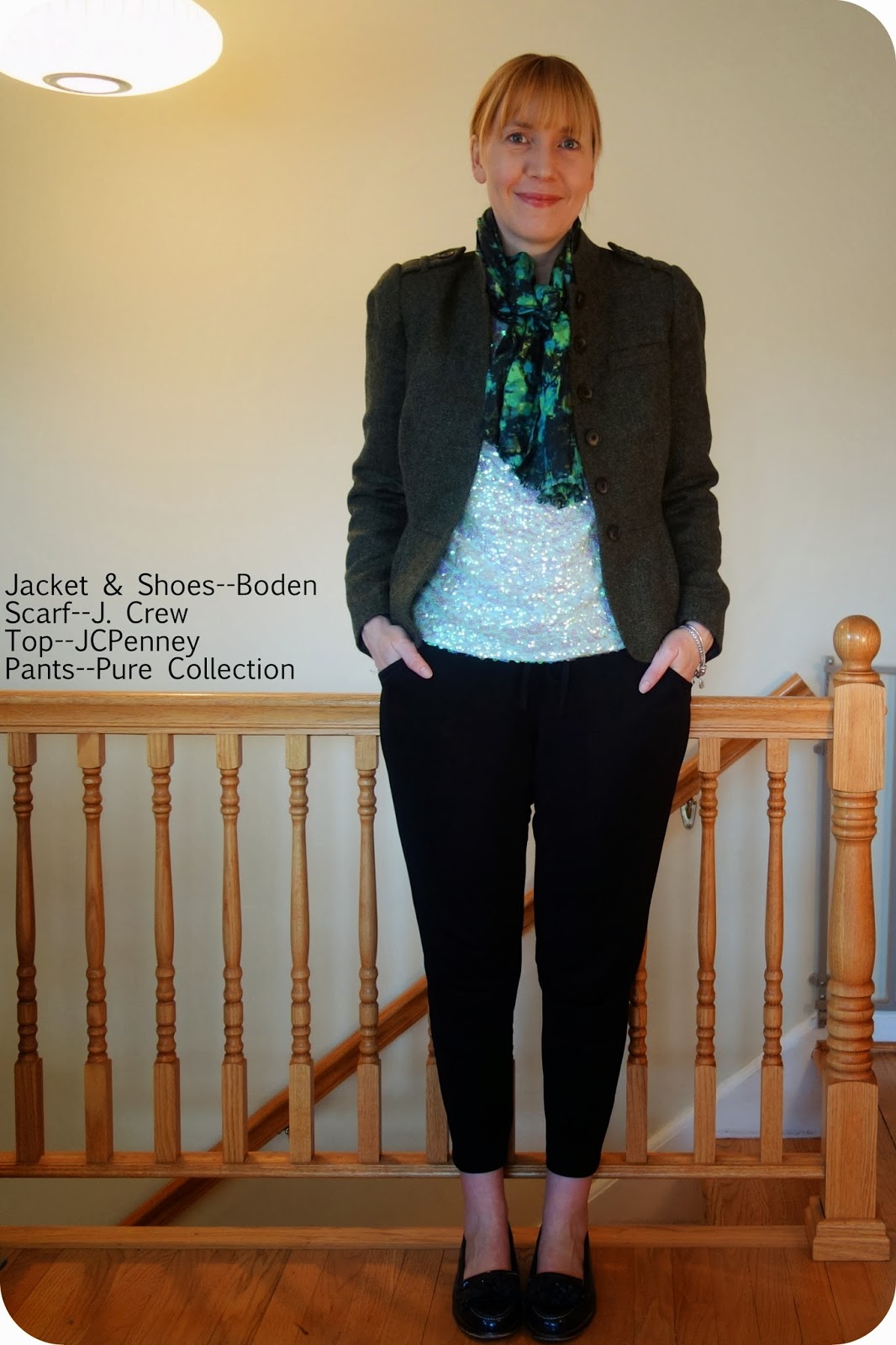 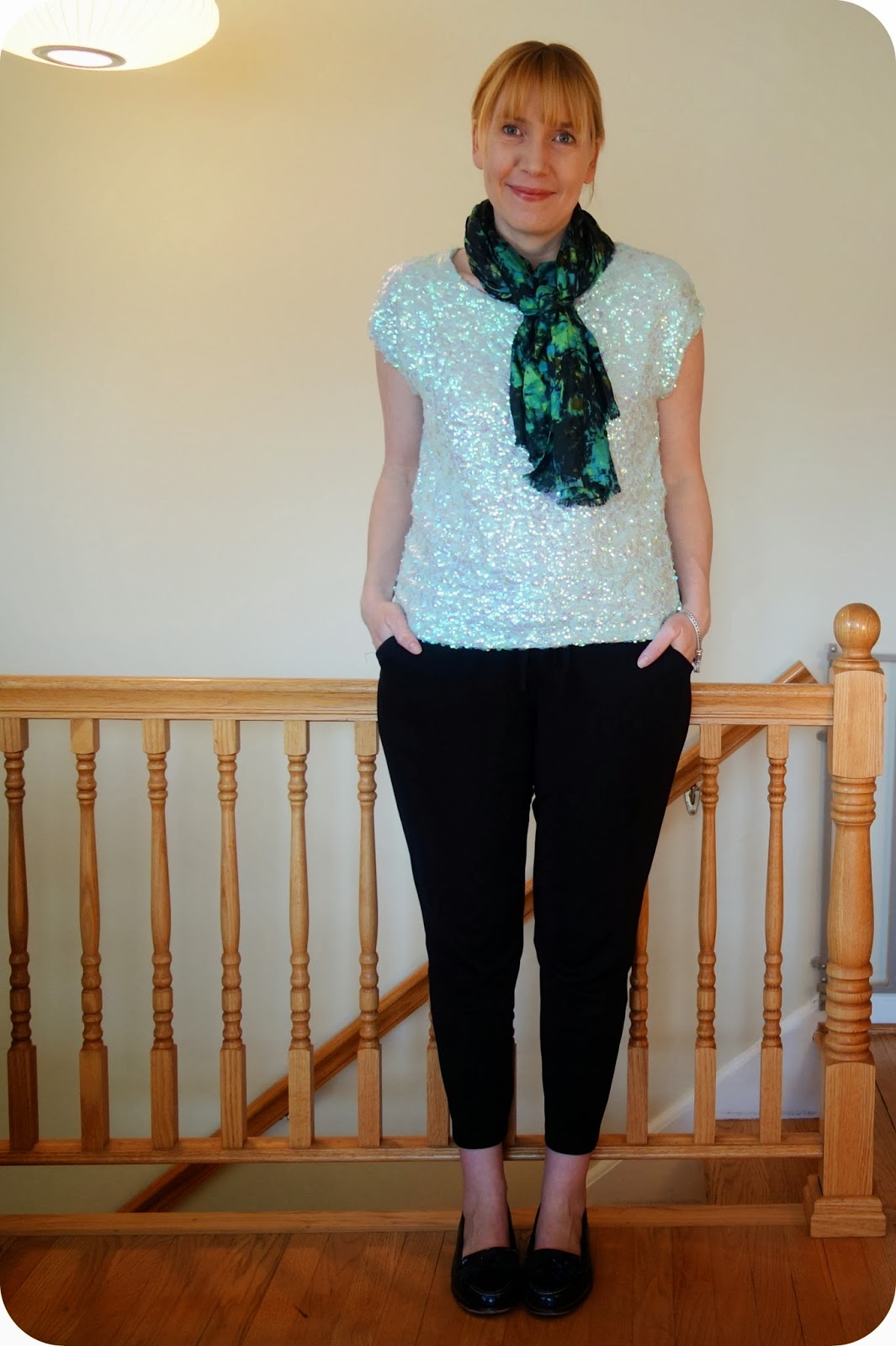 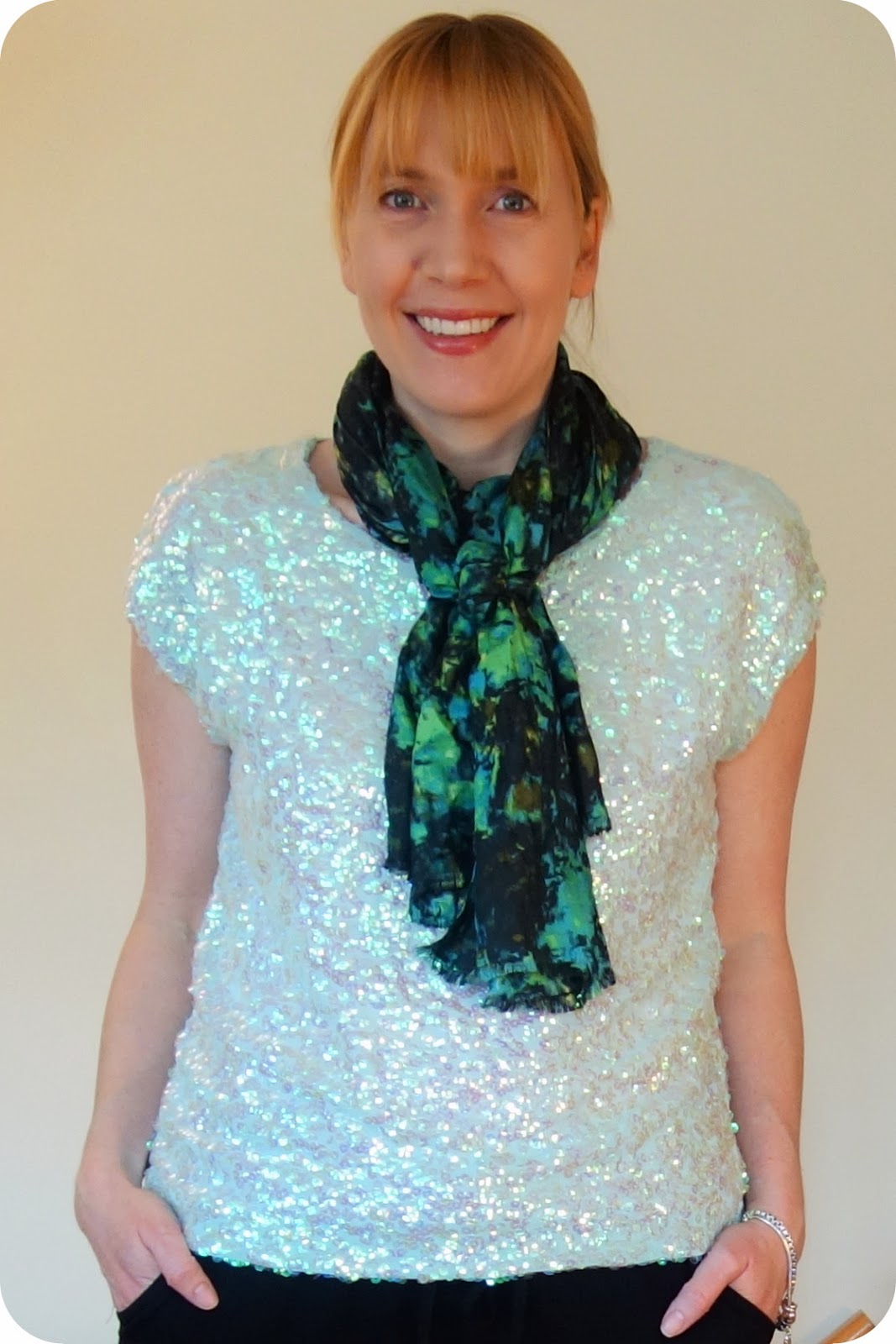 Ease of Wear: (3.5 of 5 stars--5 being the most easy to wear) Overall a very comfortable, weather-appropriate outfit, but I wish that I looked less "matron of a German women's prison" when the jacket is buttoned up.  I rarely button it up, but it was chilly enough that day to have a need for the full buttoned-up look.  No biggie, I am sure no one was staring and saying, "get back to the Fraus, dear lady," but still.  I guess the more severe cut is emphasized in the name, the Military Wool Jacket ( here

--and on deep discount in all shades).

Anecdote from the Day:  That is not a typo, we went to the Little Gym twice in two days.  I had missed so many of their classes when we were gone in December, that I have had a lot to make up with them.

And I went to Harris Teeter with all three kids.  They were very well behaved, by some minor miracle.  Hallelujah! 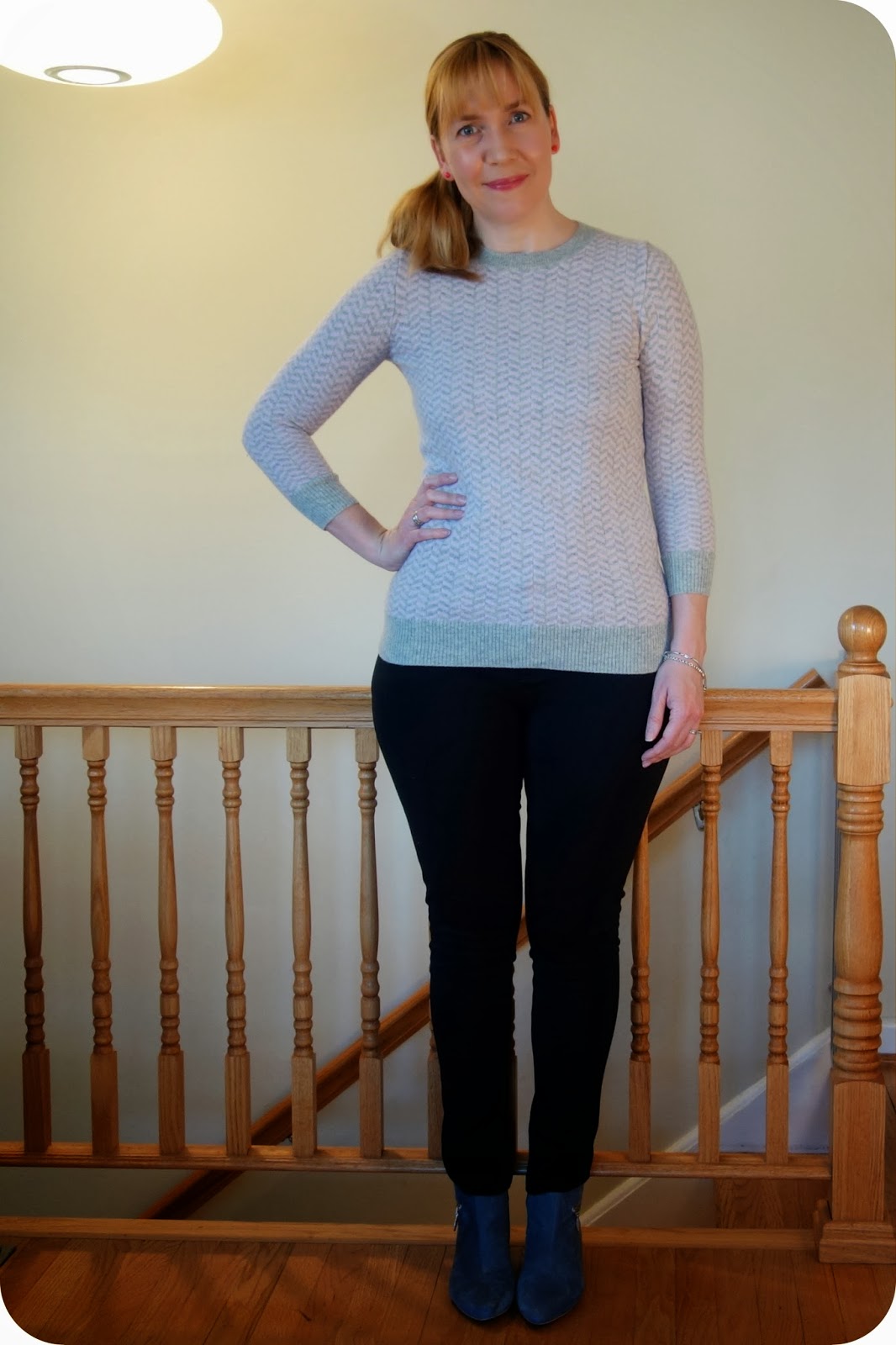 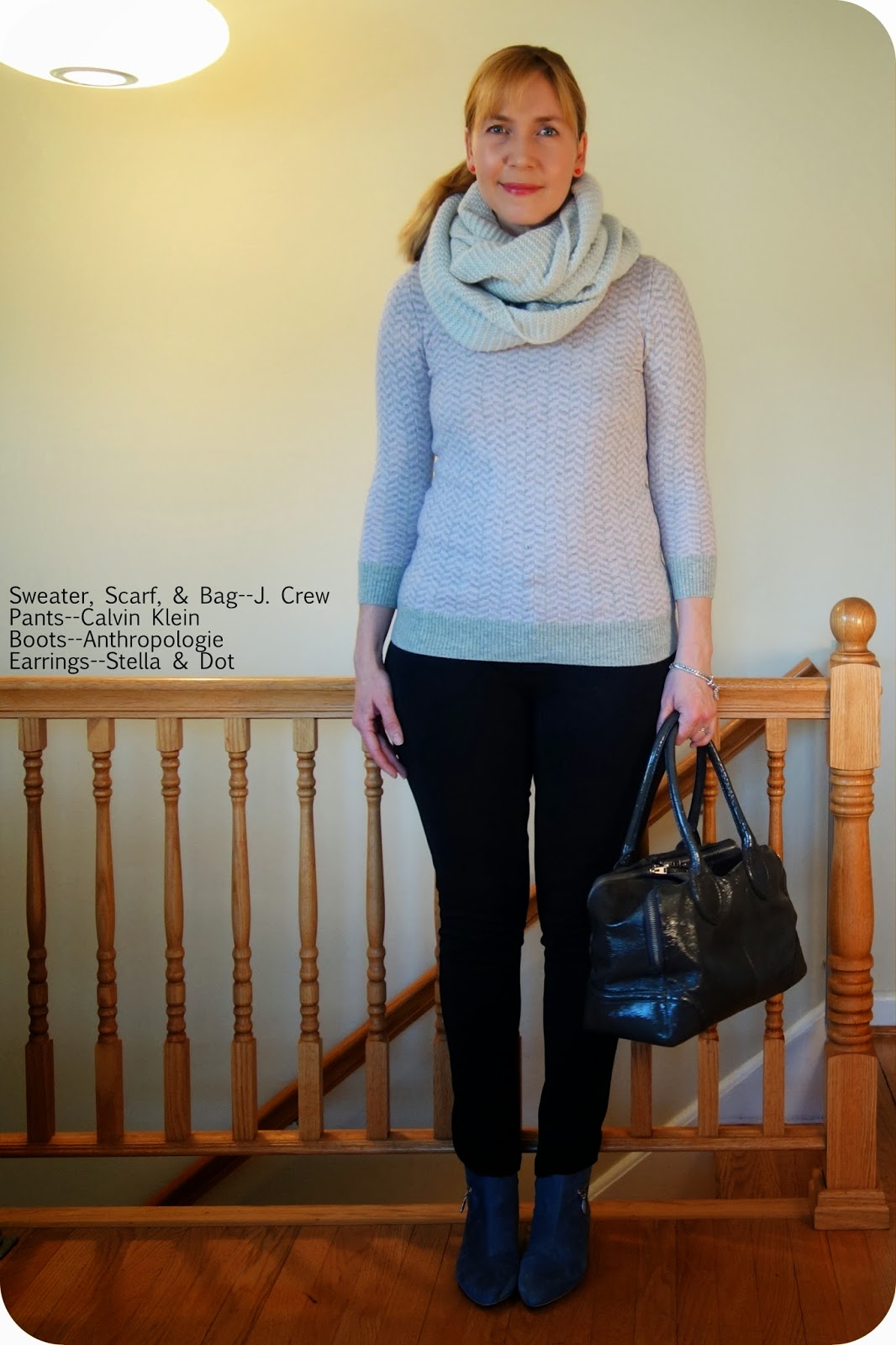 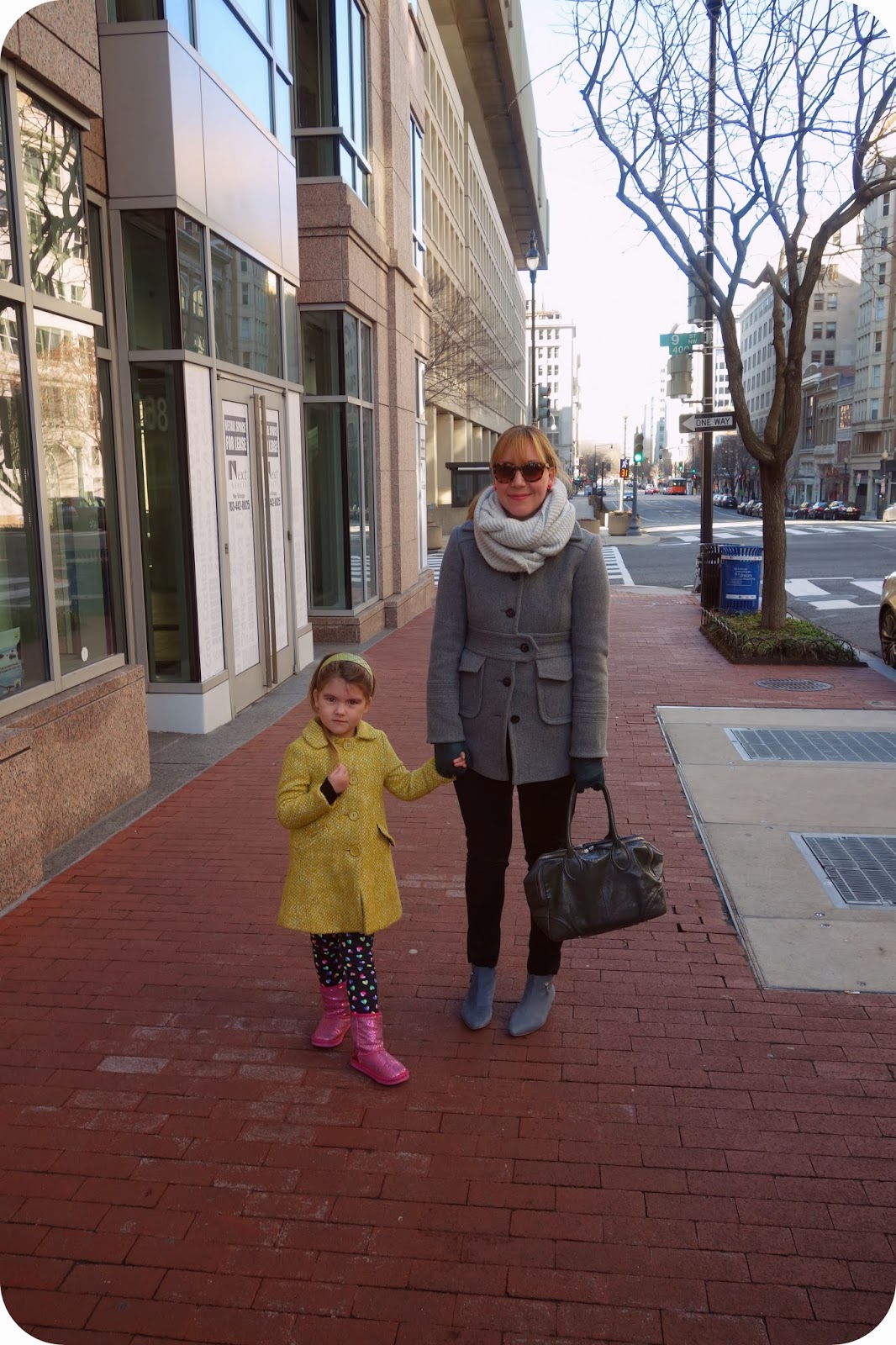 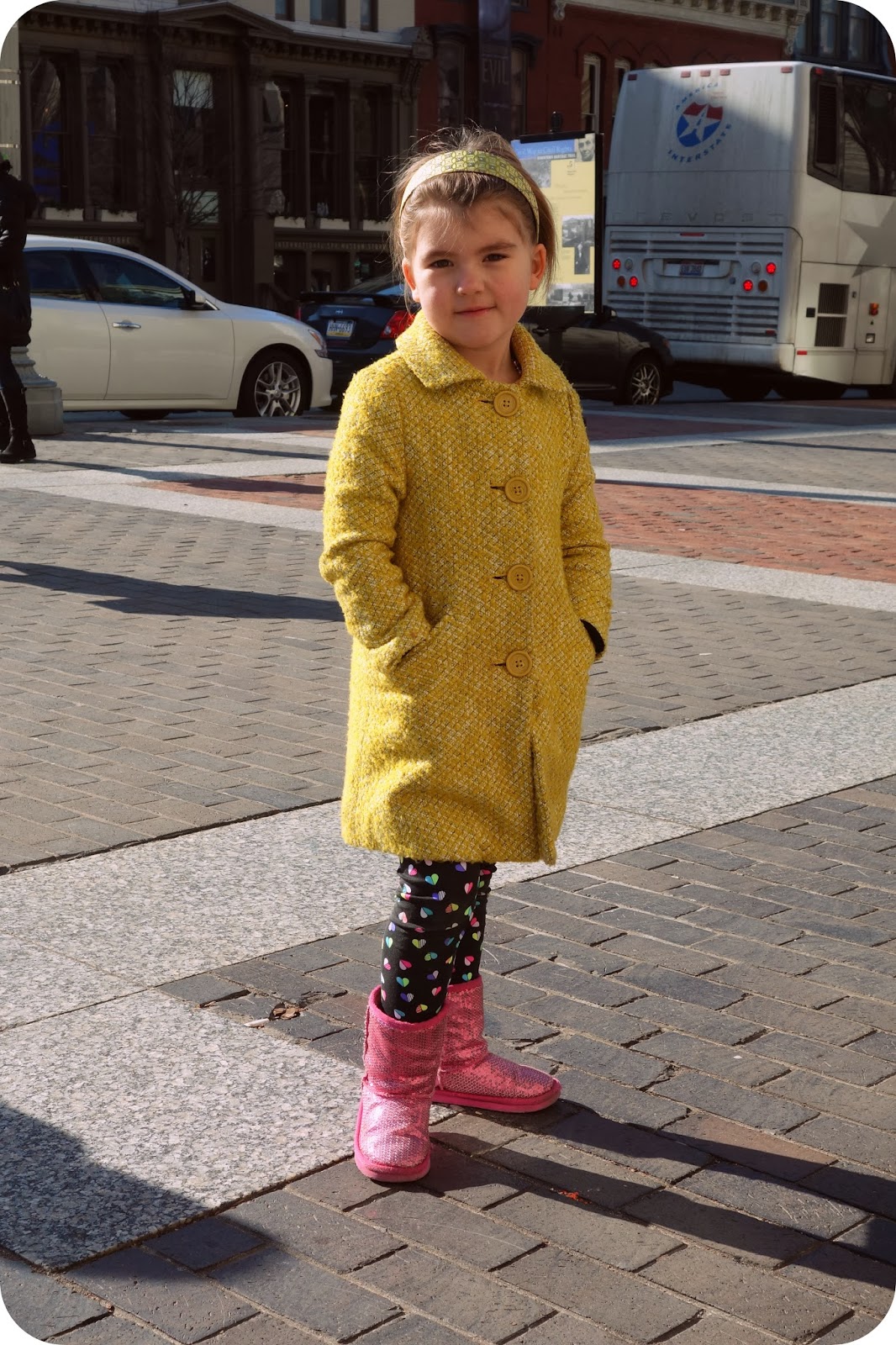 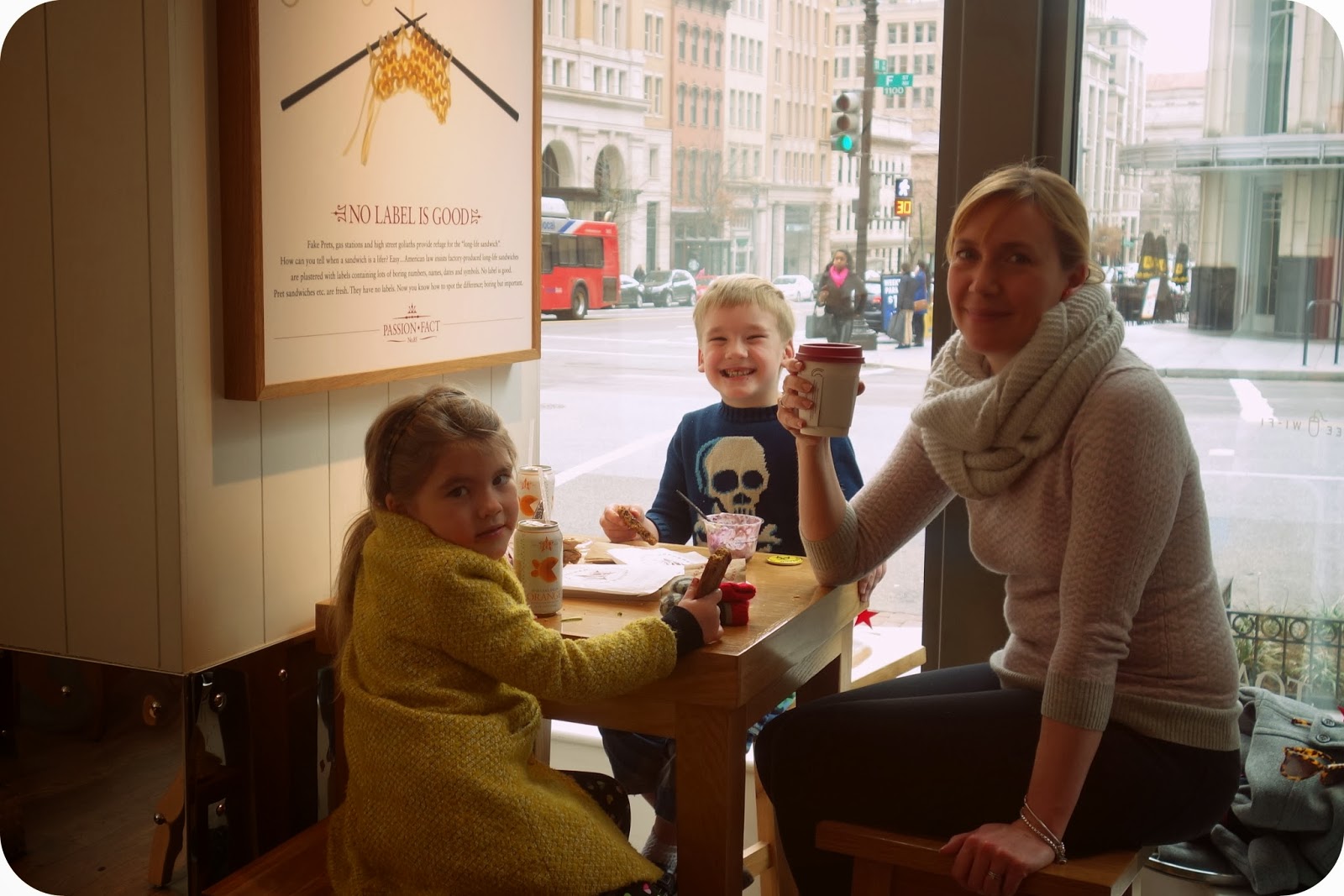 Where: Day out in DC with the family.

Ease of Wear: (4 of 5 stars--5 being the most easy to wear) It was windy and cold, so any plans I had to wear anything other than a thick cashmere sweater and snood went away after I went outside briefly that morning.

On the fly, I kind of dig how easy this outfit is and how cute it looks all together.  The Anthropologie

boots (made by Pied Juste, more on the brand's history here) are super cool, but not super warm, so they are the reason the outfit had a point knocked off.  (Well and the fact that I triple-looped the snood around my neck, which meant it felt rather tight...warm, but tight.)

Cool Factor: (4 of 5 stars--5 being the coolest--for both outfits.) I reckon this is a pretty cool look.  I felt cool anyhow.  My girl was probably the coolest.  Standing at the J. Crew, trying to figure out what time it opened (we had a return to make), a lady remarked on how well-dressed CW was.  Aw!  (She picked out her outfit completely on her own, btw.)

Anecdote from the Day:  We had intended to have me take the oldest two to the city on Friday (they had the day off--hence why they were so well-behaved at the Harris Teeter), but those plans fell through after Angus's babysitter fell through.  In the end, we decided to all head to the city on Sunday instead and I took CW to the Portrait Gallery, while Mr. Dina took Rex and Angus to the Spy Museum.  I then grabbed Rex and CW and went to the Pret a Manger, while Mr. Dina took Angus to the Shake Shack.  (Rex, CW, and I LOVE Pret a Manger, and we go whenever we can.)

Okay, that's it for tonight.  If you haven't had a chance, don't forget to enter my five-year blogoversy giveaway here.
Posted by dinagideon at 7:56 PM