Made by Me Files: So Many Scarves!

Okay, so in honor of it being below freezing and snowing here in Northern Virginia, I thought I would round-up all of my recent scarf projects in one place.  Most of these below were Christmas presents, but a handful were for me.  (Of course, because you have to test on someone, right???)  ;-)

Enjoy the parade of neck warmers...

pattern.  (It is free and very easy to follow.  I ended up having to change measurements, etc., in the process, but overall, the idea is the same for all of the infinity scarves I created.) 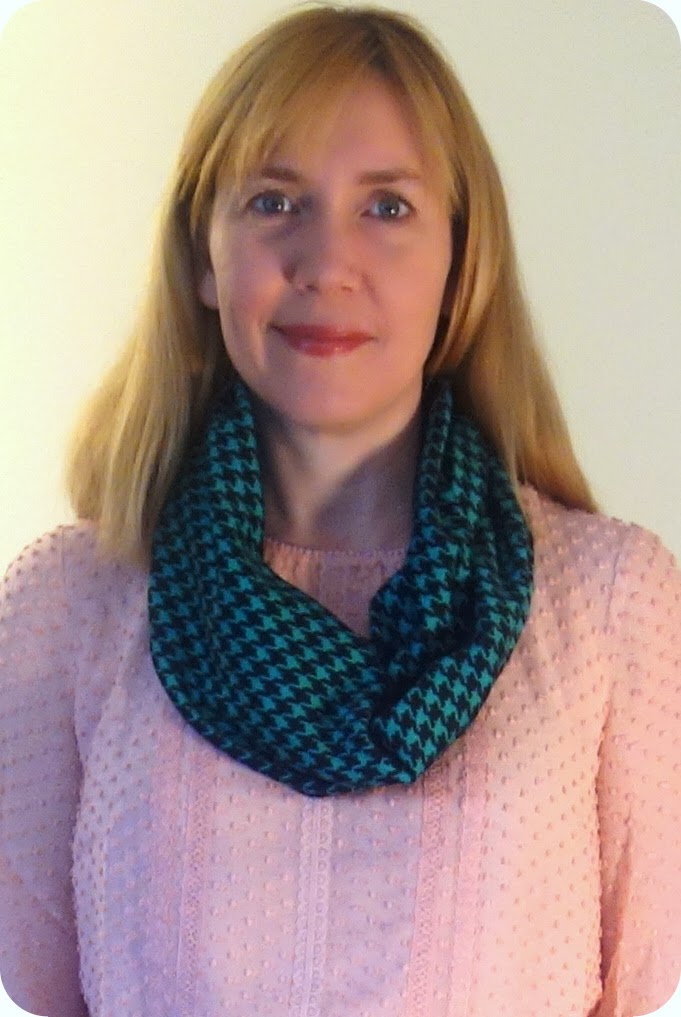 I made the above scarf out of a houndstooth cotton jersey ( similar here at fabric.com

) for my good friend, B., who happens to have a great big crush on houndstooth.  I kind of knew she would dig it, and the next time I saw her, she was wearing it...and it looked fab on her.  Since I am not a fan of making people appear here who may prefer some privacy, I took a photo of me in it.  I kind of dig it, too.  :-)  I have about a yard of the fabric left, so I may make a top from the leftovers. 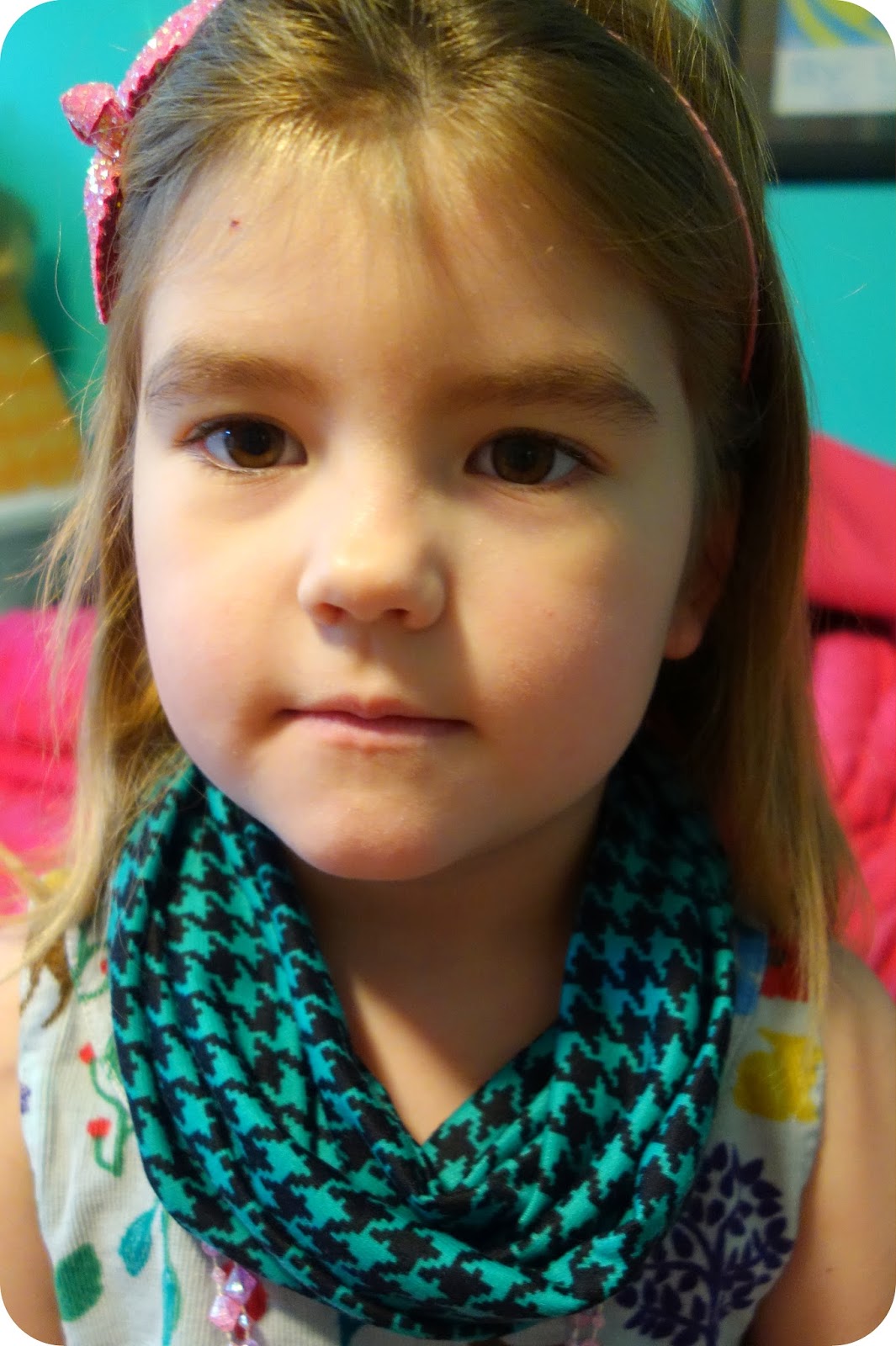 B's daughter, M, just turned three and I thought, "wouldn't that be so cute, a mini-me version of the infinity scarf I made for B?"  Well CW thought so, but she is 5 1/2, and a fashionista, so I knew that she would beg me for her own.  (And she did.)  I am not sure M. got it, but maybe she will when she is a bit older. 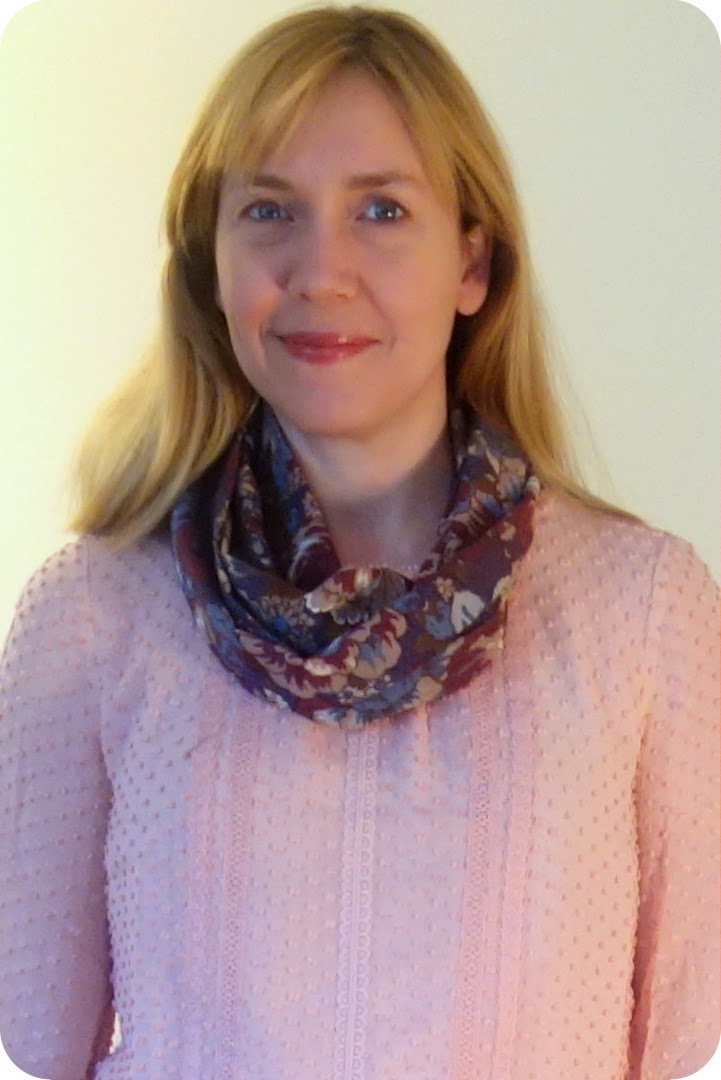 You have seen this scarf on me already, I wore it here at this post.  As a reminder, the fabric is a wool challis from Fabric Mart that is so soft and airy.  My next plan is to take a similar wool challis and make a square scarf, a la Hermes. 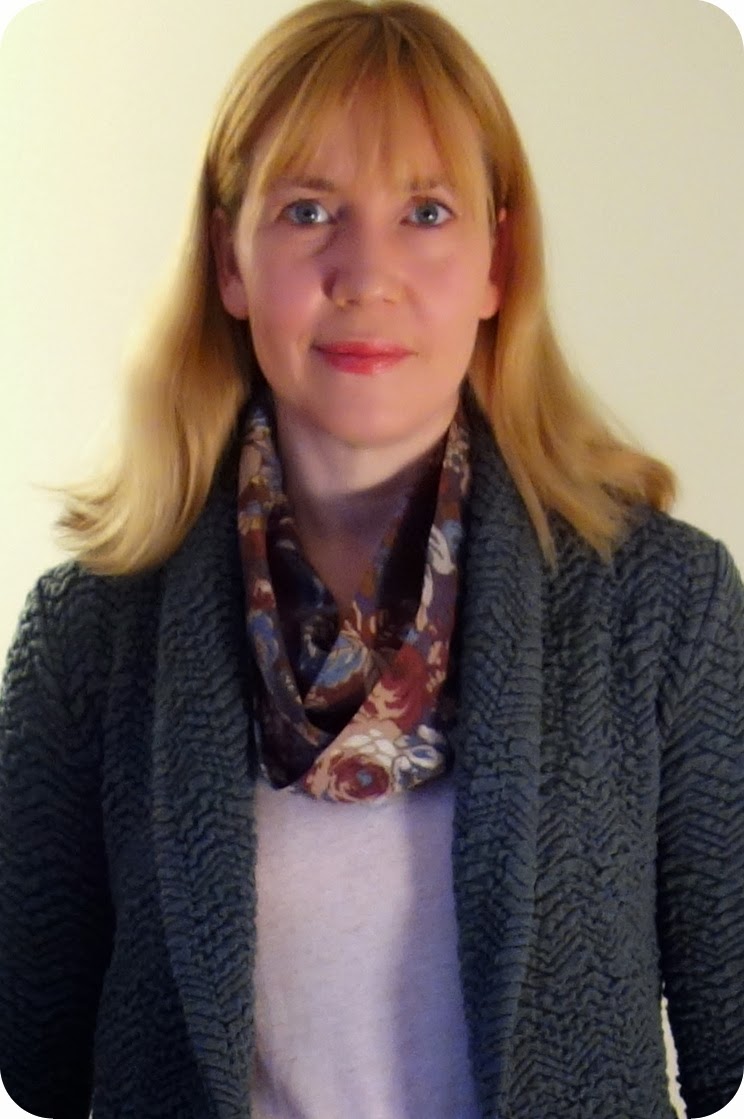 I wore the wool challis scarf again a few days later (you just haven't seen this outfit yet). 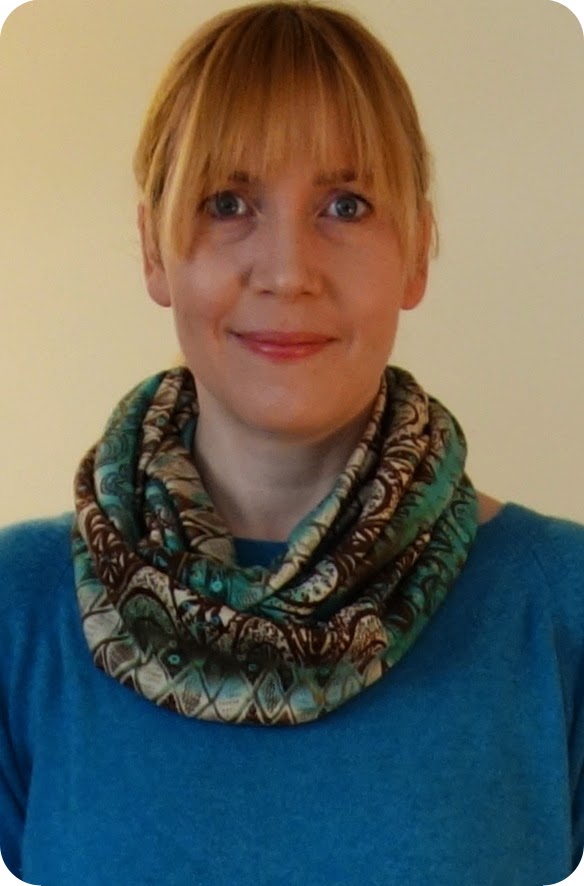 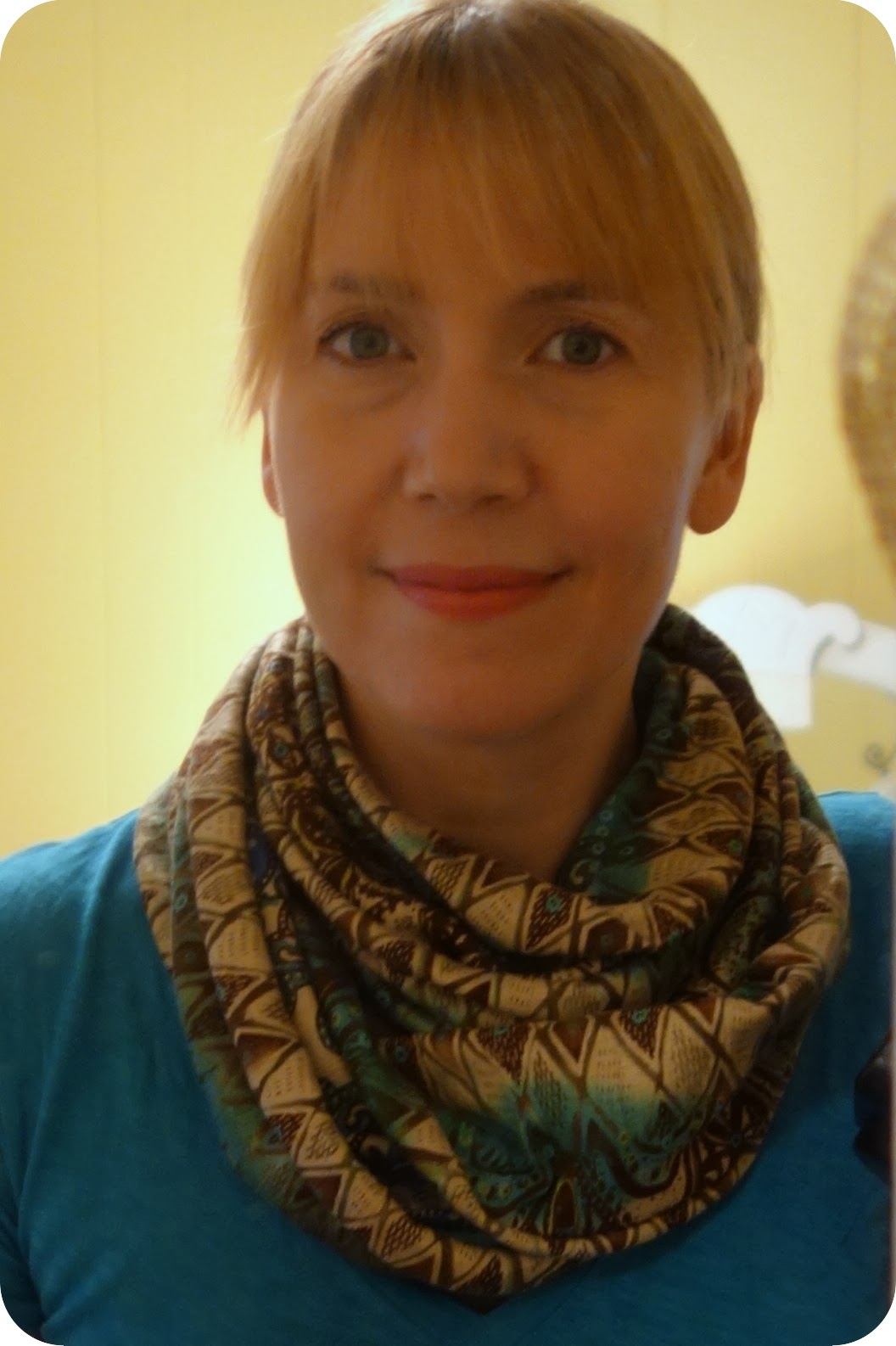 You have seen the above tribal print cotton jersey scarf already, here at this post, but I figured another reminder would be helpful, especially if you dug the look.

The second type is a scarf that I *sort of* created on my own.  Basically I took the infinity scarf pattern, but instead of sewing the final ends together, I let them hang free and added some beaded fringe to the ends.  The scarves can still be tied in an infinity-esque look, but is a touch dressier with the bling hanging off of it.  I have a tutorial planned using the first scarf (directly below this paragraph), so if you like the look of it, be on the lookout for that in the near future. 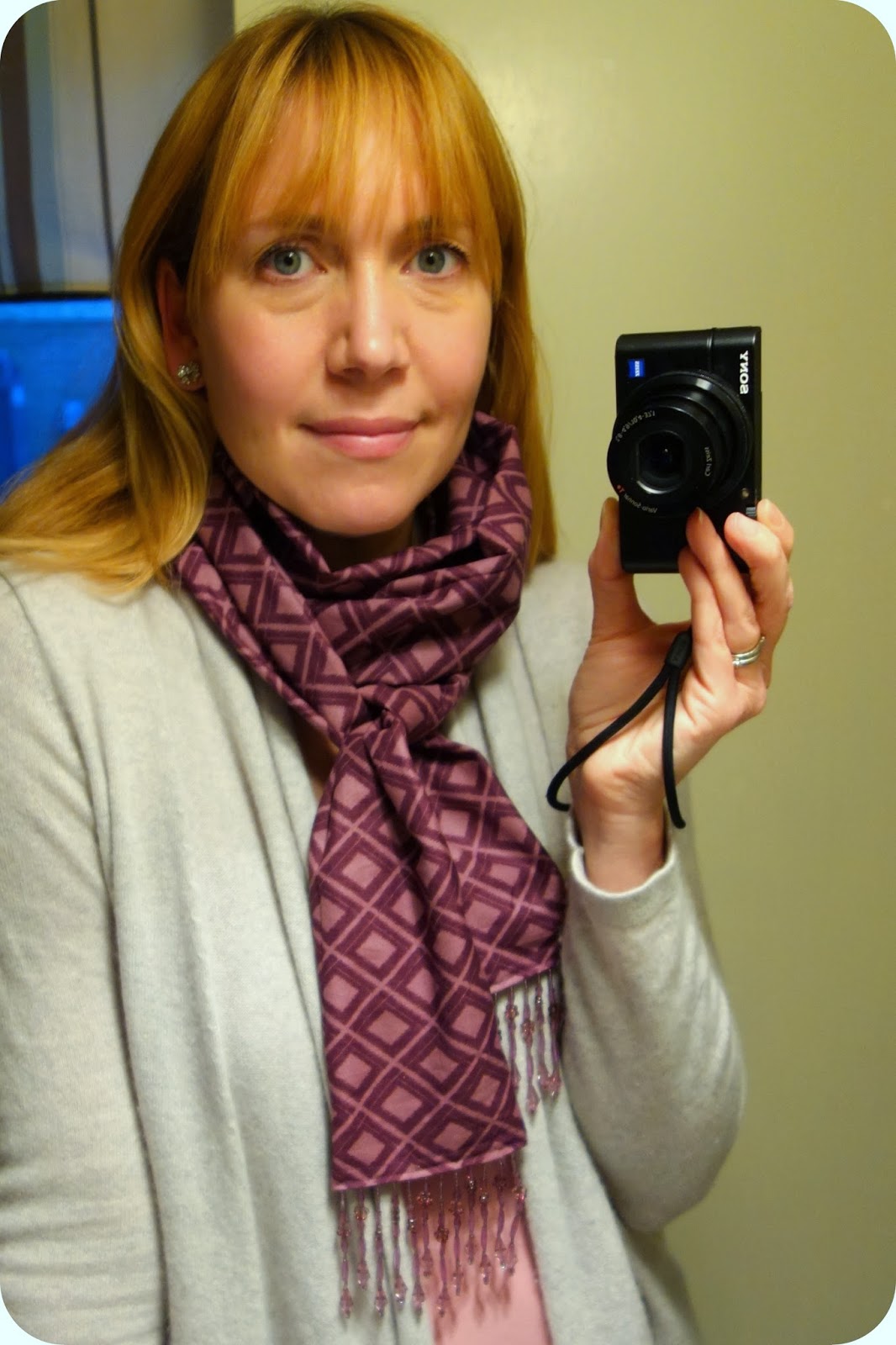 This scarf was for my bowling buddy, P.  She isn't super girly-girl, but I kind of thought she may appreciate having a pretty purple scarf with a touch of shine in her wardrobe.  She sews, so I know she knows what effort I put into it, so she seemed very appreciative.  It felt good to see her smile.  I used a quilting cotton for her scarf.

The beading was from Fabric Mart, but they no longer carry it (I received it for free, btw, in a trim bundle). 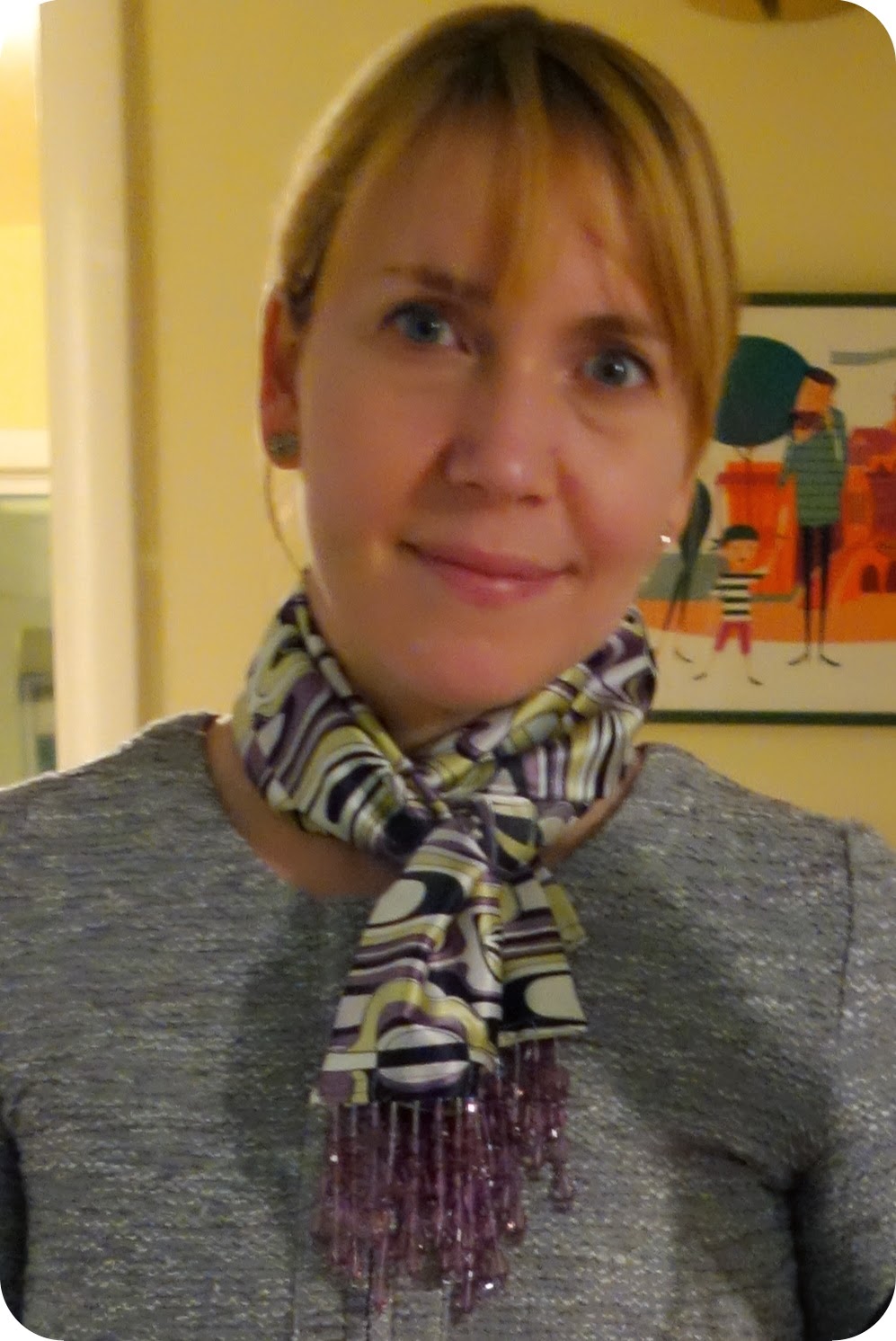 This scarf was for my bowling friend, S., who you saw here with me at an 80s cover band concert.  She LOVES purple, so I knew she would like this scarf.  It is made from a poly charmeuse fabric from Gorgeous Fabrics (I received a small remnant, just enough for a short scarf), and the beading. 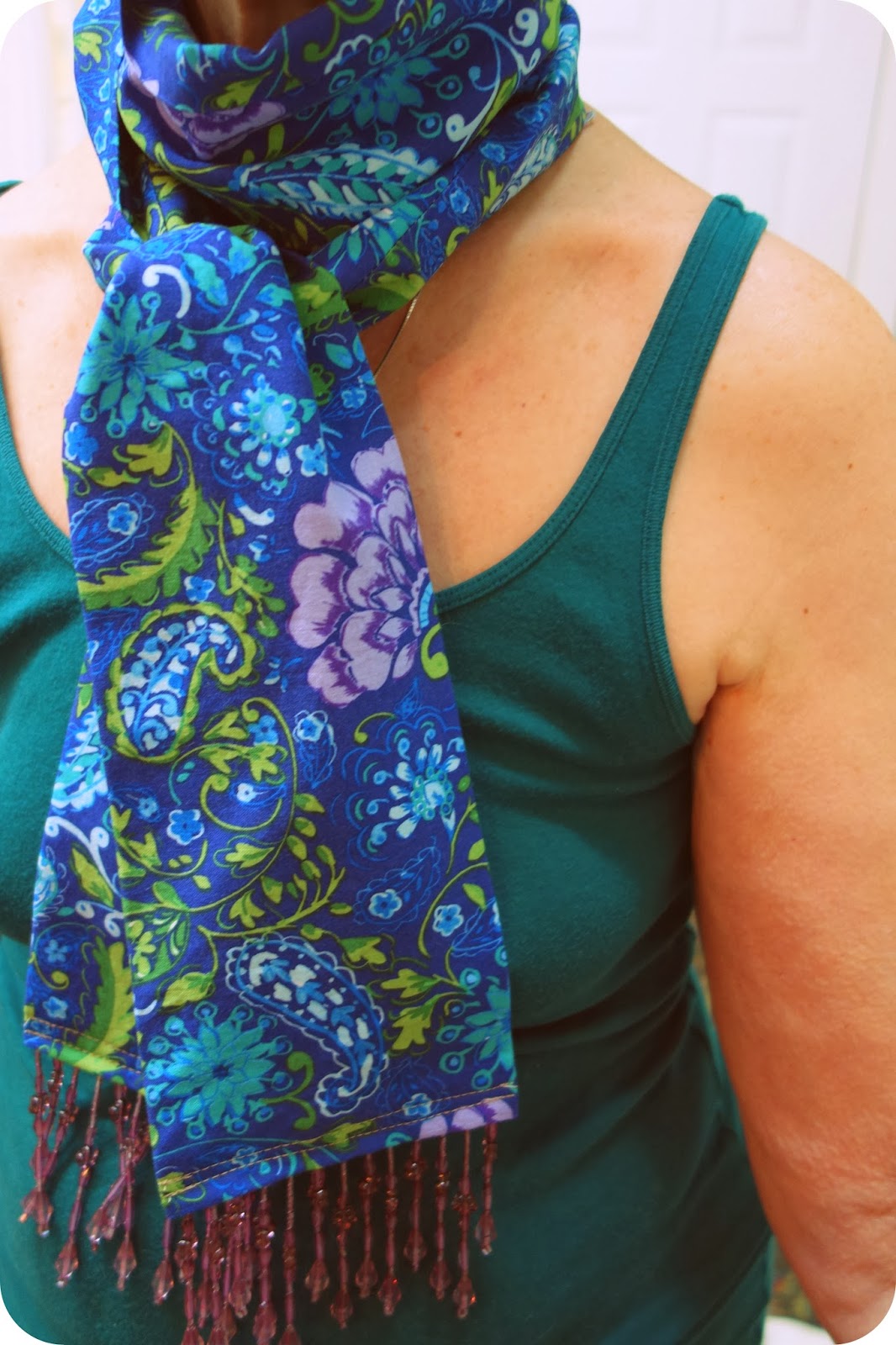 This scarf was made for my mother (my mother-in-law is modelling it, though).  This is also made from a quilting cotton in the colors my mother JUST LOVES.  She loved it so much she literally flipped out on facebook after receiving it.  Then I told her I sewed it, and she subsequently freaked out even more.  LOL.  :-D

Okay, so that's it for tonight!!!  I hope if you are sewing, you are sewing something to keep you warm.  And if you aren't a sewer, just stay warm, okay???
Posted by dinagideon at 11:03 PM