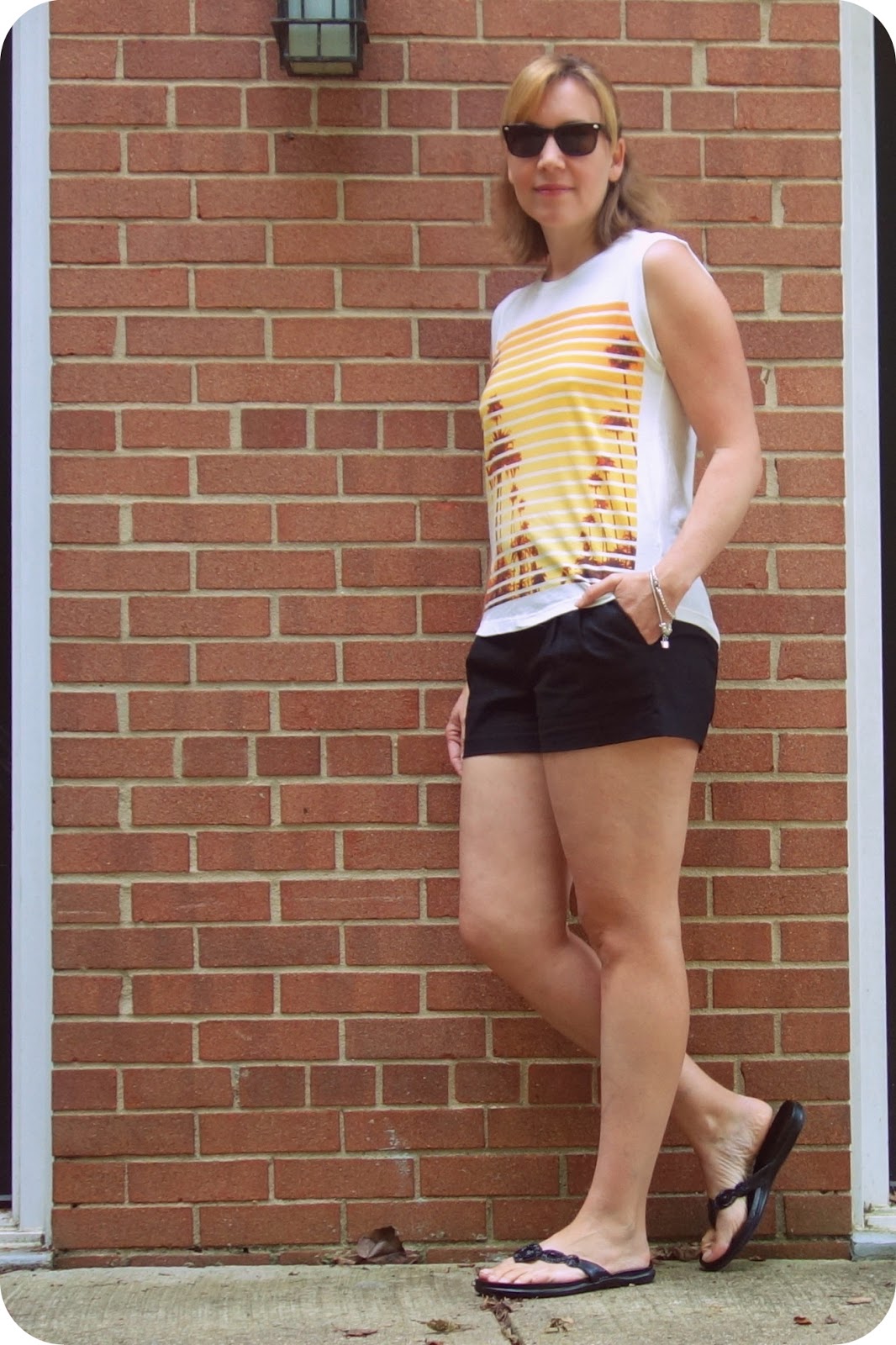 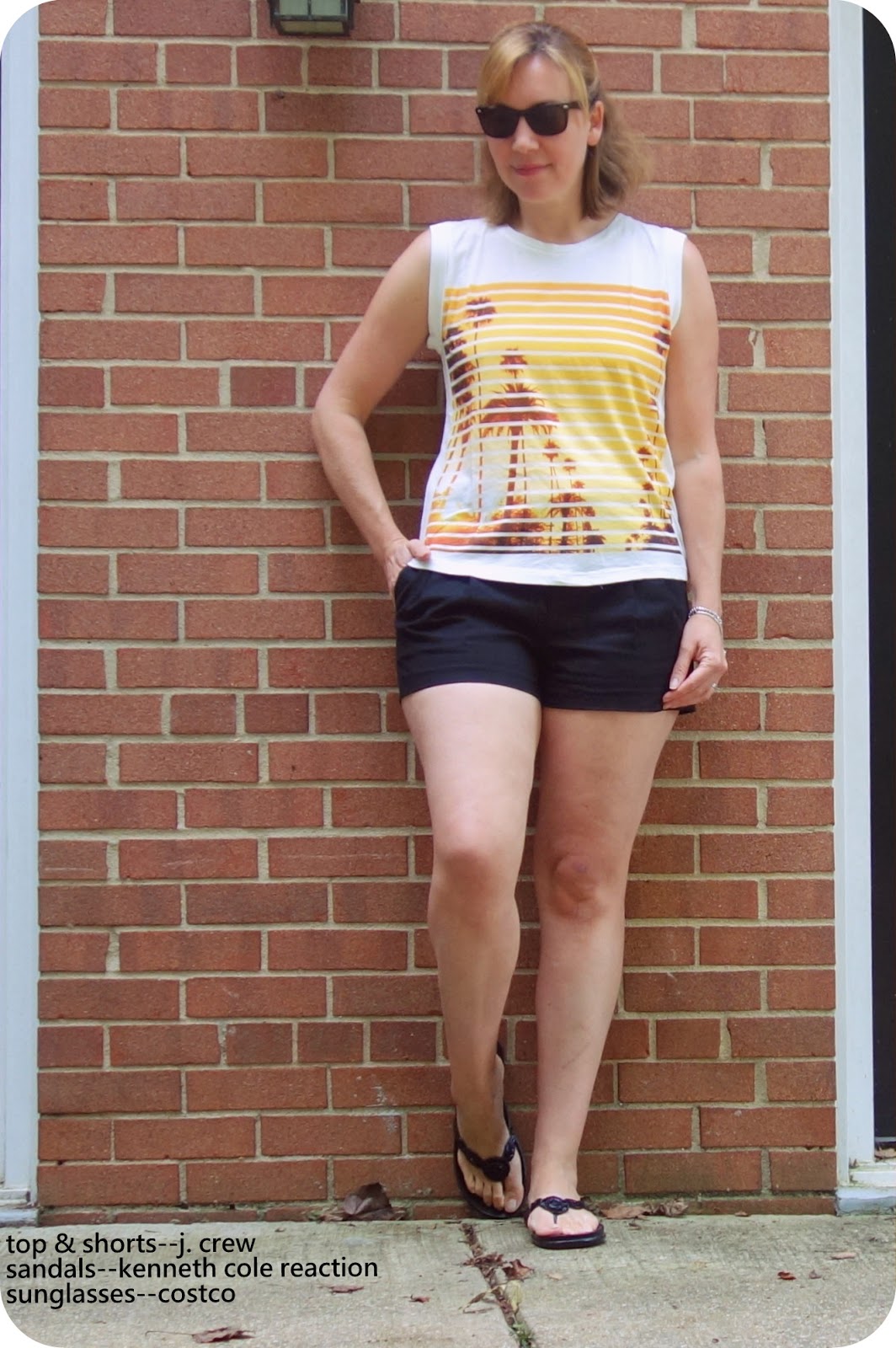 Where: So mundane--Joann's to pick up fabric for the boys pjs and Harris Teeter to go grocery shopping.  I live the life, you all.

Ease of Wear: (3.75 of 5 stars--5 being the most easy to wear.)  By the end of the day, I can push this to a 4, but I always feel a bit exposed in shorter shorts.  I should probably just get over it already or stop wearing them, but to me, these muscle tees that I love wearing look best with a shorter silhouette on bottom, so there you go.  I guess I could just wear a skirt, but eh, three kids, you know?

I do want to include a quickie review of this tee, the photo stripe tank from J. Crew, since I have been wanting it since early July, and maybe there are a few of you out there who are eyeing it now that it is on super sale (I was able to buy mine for $21 plus shipping).  I had first seen it online and knew I wanted it, but at $45, I wasn't willing to do it, especially for a fairly simple/sheer tee.  I then got to the store and tried it on, but again, at $45, nuh uh.  So when it went down to $36 minus 40%, I was then willing, since $21 for this tank seemed reasonable enough to me.

I tried it on in a small, and seeing that it was just loose enough to keep it casual, but not sloppy, I didn't bother with the extra-small.  I often buy extra-smalls in J. Crew tees, so bear that in mind.  I don't know that I would have liked the extra-small on me, it would have been too fitted for the look I wanted to achieve.

The tee is fairly sheer, but not anything indecent.  I love the graphic, it is well done and very pretty.

Cool Factor: (4.5 of 5 stars--5 being the coolest--for both outfits.) I am definitely in love with this look and I felt cool today.

Anecdote from the Day:  If you are a long time reader (like from the very beginning) you will remember me posting about my HUGE crush on Don Henley* way back when I was in high school.  It was mad and redonk, but oh, my, he was my *everything.*

*The link in that post is broken but it was for an ebay listing for a bag made from this Rolling Stone cover.

I also am from California (born there, spent multiple summers there as a kid).  I moved to VA as a young girl, but I always thought I would move to CA after high school.  I even applied to USC and Chapman, was accepted, but then decided not to go at the last minute.

So the mix of Don Henley/California Love gave me an great appreciation for all things west coast, especially the video for Boys of Summer.  I remember one summer spent listening to Boys of Summer non-stop and thinking of my future as Don Henley's wife under the setting sun on the beach, wearing our Ray-Bans with the swaying palm trees behind us.  (And, yes, our car would be the car from the video.)

Well obviously I stayed in VA, and I married someone else, but the tee reminds me so much of that time/obsession, that I am happy that I have it and can secretly remind myself of being the greatly deluded teenager I once was.  ;-) 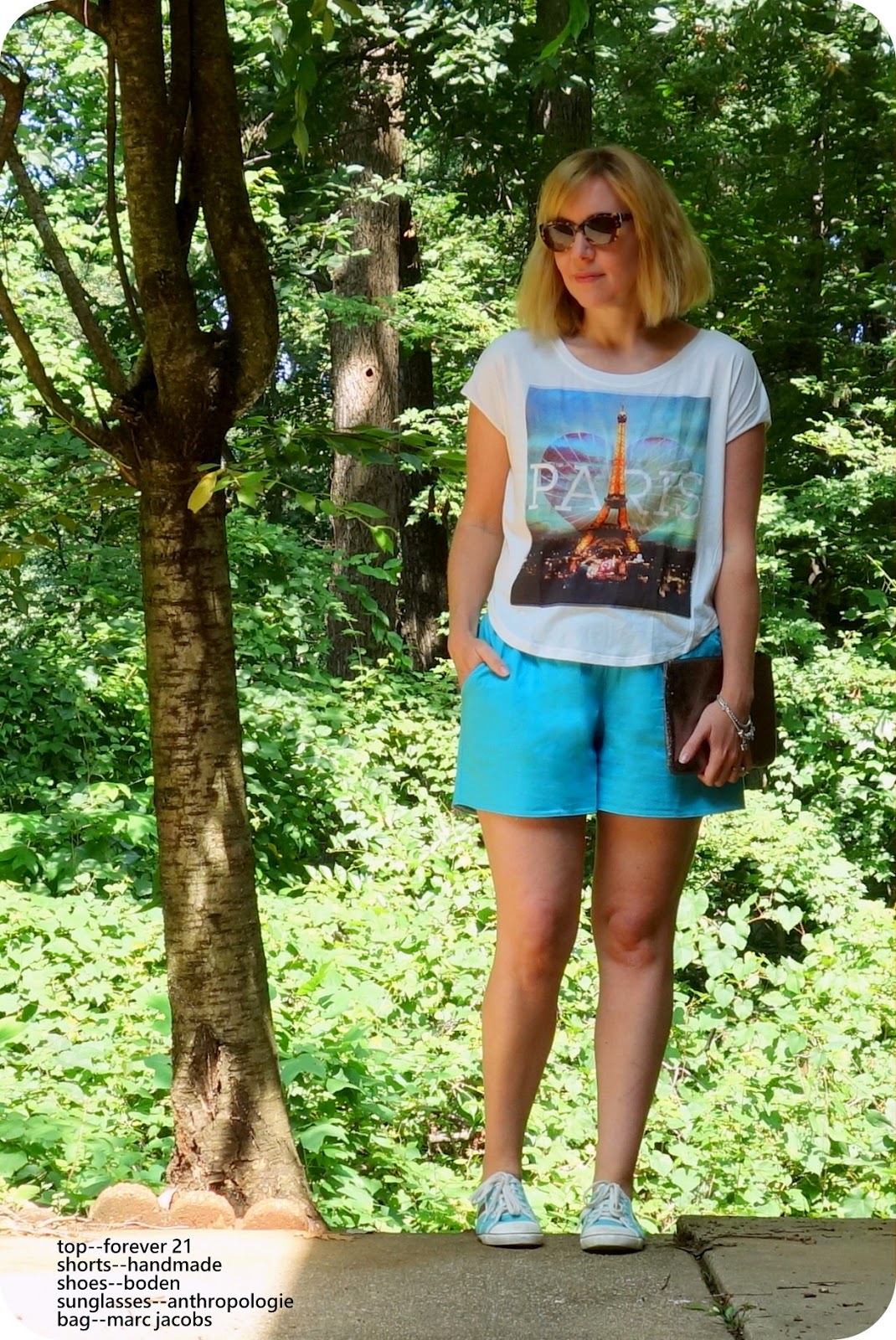 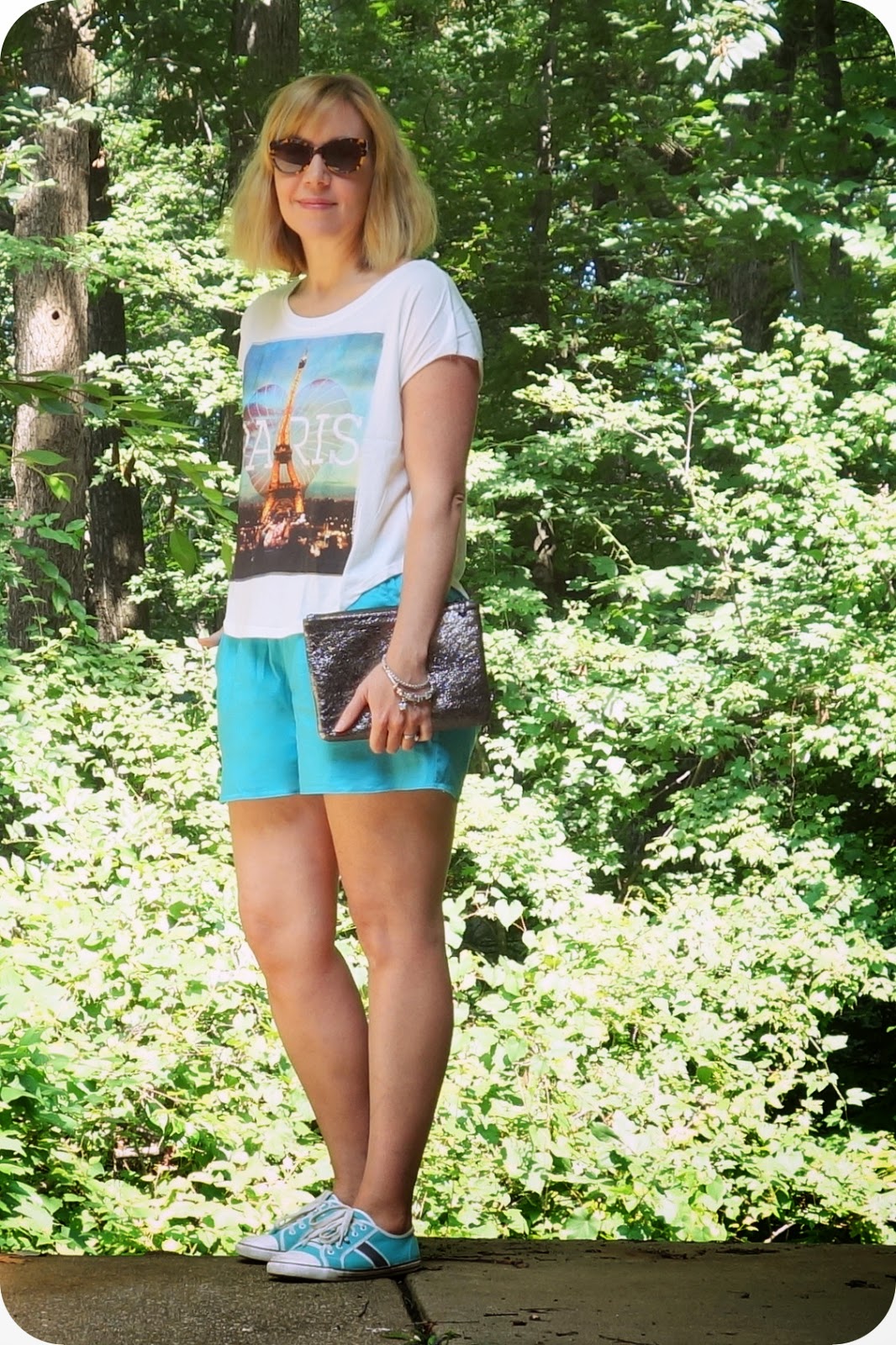 Ease of Wear: (4 of 5 stars--5 being the most easy to wear.)  The darling Paris tee from Forever 21 is really fun, but it is a touch short on the sides so I needed to make sure that I kept my cami tucked in so the line of the sides weren't ruined by it.  But, really, other than that, super comfortable.  The shorts are made by me (here), so clearly they probably fit me well.  ;-)

Cool Factor: (4 of 5 stars--5 being the coolest--for both outfits.) Shorts may be a touch baggy, but a decent summer look.  I felt young.

Anecdote from the Day:  Uniform shopping is such a bear.  We definitely knew that while we wouldn't have minded saving $25 on VA's tax free weekend to purchase the kids' uniforms for the year, we also know that place is an absolute madhouse on their slow days, so we chose to go the day after the tax-free weekend ended.  It was still super crowded, but tolerable.  And since all the kids were with us, we need all the help to keep us sane.  I cannot even imagine what the place looked like on Fri, Sat, and Sun.  Yikes.

Okay, that's it for now!  I hope all of you are doing well.

And since I am curious, and I rarely ask questions like this...who was your secret celebrity crush?  Was yours as odd as mine?

Posted by dinagideon at 5:58 PM