I am not a big fall or winter fan, and I have been known (especially in February) to have threatened to move to Florida or South Carolina in hopes of never having to encounter a snow flake or ice storm ever. again., but right now temps in the low 70s or high 60s would be fine by me (it has been in the high 70s and low 80s, those ten degrees seem piddling, but they're not, at least to me).

After spending my entire pregnancy last year sweltering in North America's warmest winter on record, and the spending my entire summer nursing the world's largest baby through multiple heat waves and a derecho, I have to admit to a *tiny* pining for some cooler weather.

But, nope.  Even with the promise of cooler temps today, I still ended up disrobing halfway through the day (see the outfit photo here at the facebook page to look at how ridiculously overdressed I was).

But I still give in, believing the darn forecasters, as you will see in the below outfit photos...every one of them features some sort of cardigan or sweater (which I later ended up regretting, sigh).

You all have every right, btw, to go ahead and remind me of this post when my inevitable b*tching about the cold, wind, rain, and snow happens in a few months time.  ;) 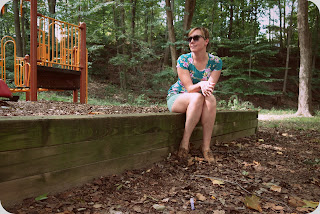 First up we have the outfit I wore yesterday to take the kids to classes and the park (pictured!) for a playdate.  It is intentional hipster, including the topknot. 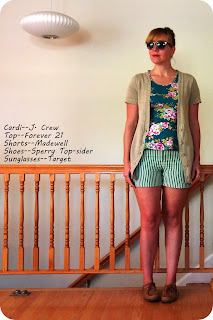 Yeah, I probably will never try this combo again, but I kind of was digging it as I wore it, so I guess that's half the battle?

I had been meaning to wear the top, but since I wasn't deluded enough to wear pants (such a weather cynic, that's me) with it, I figured going all out with pattern mixing was the flavor of the day.  I wore the Madewell shorts here last (second to last photo). 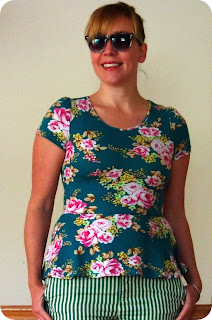 So I think Forever 21 has one of the worst laid out websites, and something like 3,128,208 tops in its inventory.  I plan on clipping the above photo to polyvore instead of trying to find this top in its site.  My three kids would never let me spend that much time trying to find it instead of playing with them.  ;) 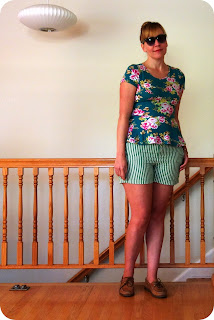 Without the cardigan.  I took the cardigan off three minutes into my day.  It was completely and utterly unnecessary, you might say superfluous.  LOL. 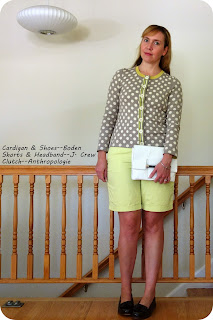 I wore this getup on Tuesday to take the kids to the doctors for their vaccinations and check-ups.

I love this cardigan from Boden (it is about three years old--wore it last here) and instead of waiting a while to pull it out, I thought, "oh, cotton, it will be fine."  Yeah, in the air conditioning of the office, Starbucks, and Giant it was fab.  Not so much out in the sun.  Lesson learned. 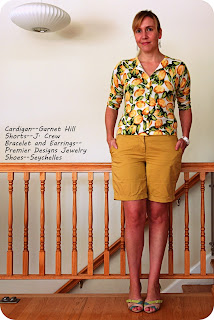 Sunday was a touch cooler, so I didn't feel so hot in this particular get-up, but if I had worn a tank under the cardigan, I would have likely taken the adorable lemon print cardigan off (this one is from Garnet Hill).

Look at how messy my hair is!!! Awesome.  So glad I saw that after I went to the party (bday party for Rex's girlfriend, for reals, his GIRLFRIEND). 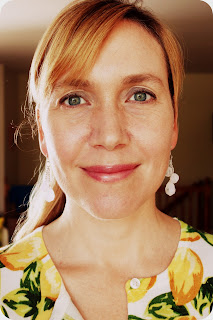 And those earrings (called the frosted earrings) are from Premier Designs Jewelry.  My friend Holly had a party and I bought a few pieces so she could get some jewelry for free.  Anyhow, our mutual friend Rachel is the consultant, and I told her I would let you all know about her facebook page, just in case you were interested in contacting her. 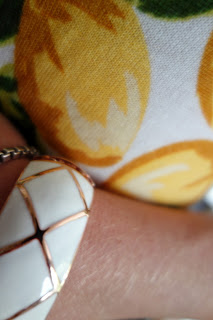 I bought this really pretty bracelet (Rosie Bracelet) from them, too.

You can also see the close-up of the lemon print on the cardi in this shot.

How about you all?  Is it cool where you are yet?  Or are you still in the thick of "summer?"
Posted by dinagideon at 9:42 PM