Phew.  What a week.  :-)  And what a week upcoming.  (CW turns five on Wednesday, and in addition to setting up for her princess party next Saturday, I roped myself into making her a Rapunzel costume from scratch to wear at the party, baking cupcakes for her classmates, and getting the house ready for her grandparents.  I'll be fine, right?)

Okay, so the paragraph above explains the meaning of the post's title, but I figured I would be all "puntastic" and at least show off a bunch of outfits worn recently that include shorts.  Oh, yeah, puntastic. 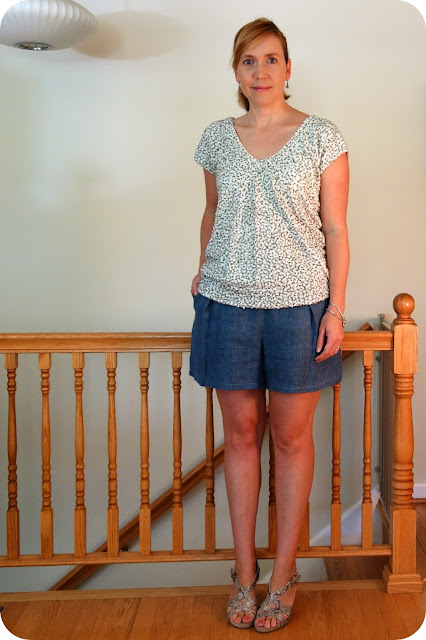 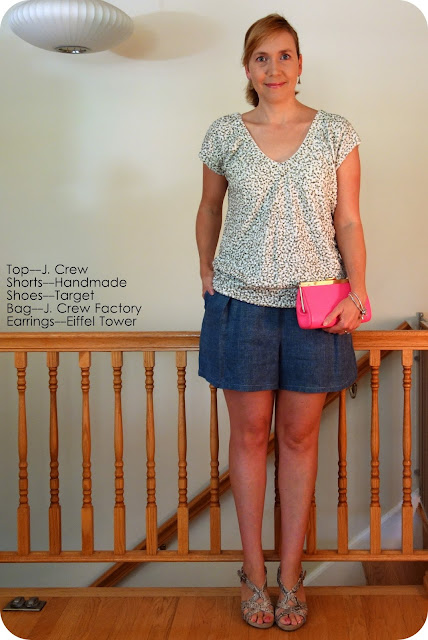 Ease of Wear: (4 of 5 stars--5 being the most easy to wear.)  These handmade linen/rayon shorts are getting a bit big since I made the waistband too large for my frame.  Downside is that I will have to alter the shorts to wear them again next summer, but on the bonus side, they are SO FREAKING comfortable.

The sequin tee is fairly comfortable, but I am always a teeny bit stressed out that I will snag them on something.  So far, so good, but I know my clumsy ways all too well.

Cool Factor: (4 of 5 stars--5 being the coolest.) Even with the large shorts, the overall look is pretty cool, especially with the neon clutch.  The look seemed and felt effortless.

Anecdote from the Day:  I don't really remember much from that day, isn't that sad?  I know that it was a relaxed day, but other than that, nothing really to report.  I will probably remember twenty minutes after I publish this.  If so, I will just come on back and write what happened then. 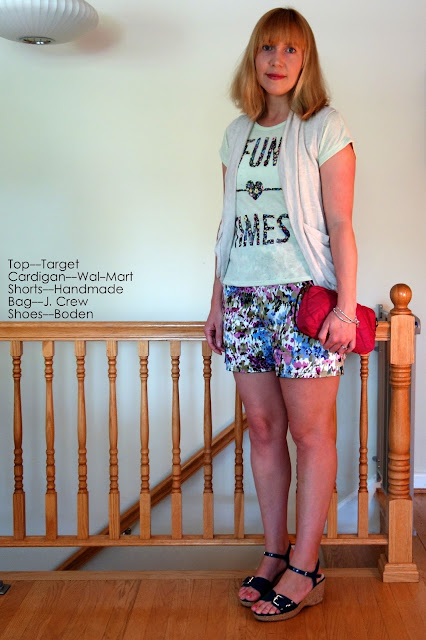 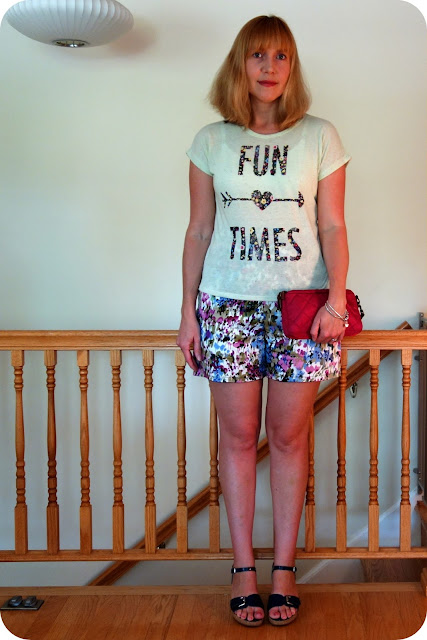 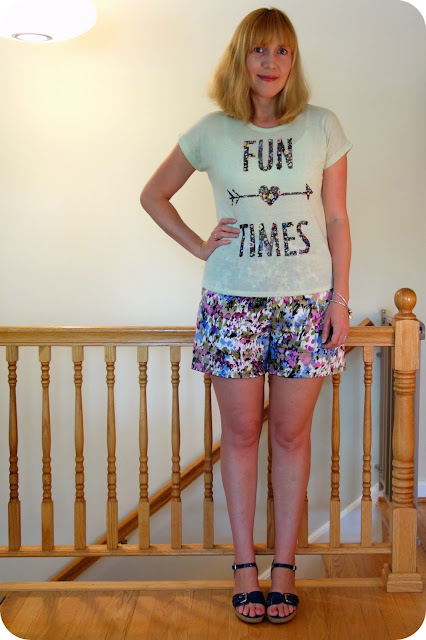 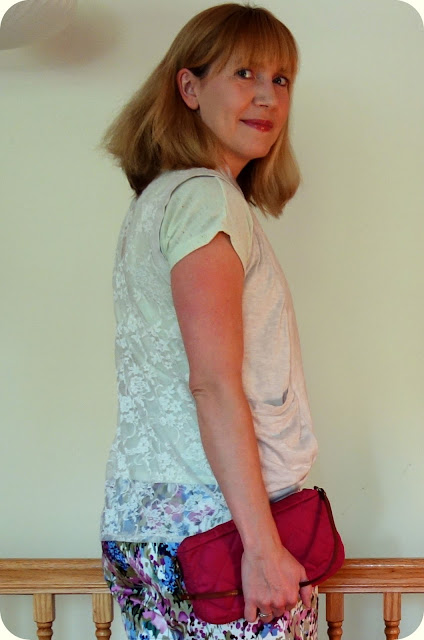 Ease of Wear: (3.5 of 5 stars--5 being the most easy to wear.)  Well it was really muggy and hot that night, so although the outfit felt great at Winesday, the outfit was a lot of look to wear while trying to keep my three kids in order at the teeball practice (my hubby was at the Muse concert--originally I was supposed to go with him--sad face).  I ended up wearing the light cardigan with lace back because the bra I was wearing showed through the fabric of this Target top, but by the end of the practice, I sort of wondered if I could have just done without.  Would anyone have noticed?

Cool Factor: (3.5 of 5 stars--5 being the coolest.) The look is decently cool, my brother loved the shirt especially.  He said he wanted a photo of me standing next to him wearing that top with the "Fun Times" arrow pointing to him.  Alas, we didn't grab that photo, but maybe the next time I wear it?

Anecdote from the Day:  I didn't post on September 11, because as much as I like posting, and had time to do so during the day, I didn't want to publish a fluffy post on that day.  I felt like silence was more appropriate.

The day is getting easier to memorialize, though.  The first few years after the attacks, I would well up in tears multiple times during the day, but now that it has been twelve years, I find that I can pray and reflect on the day and all the lives lost without as much sadness.  Of course I am still distressed that the attacks ever happened, but like all hurt, the pain dulls over time.  (For more on my experience on the day of the attacks, read this post.) 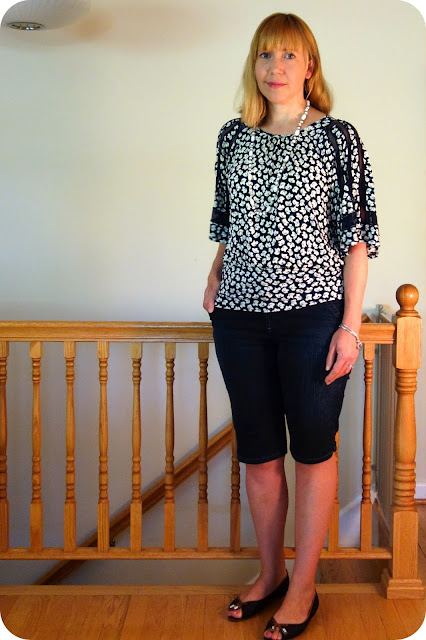 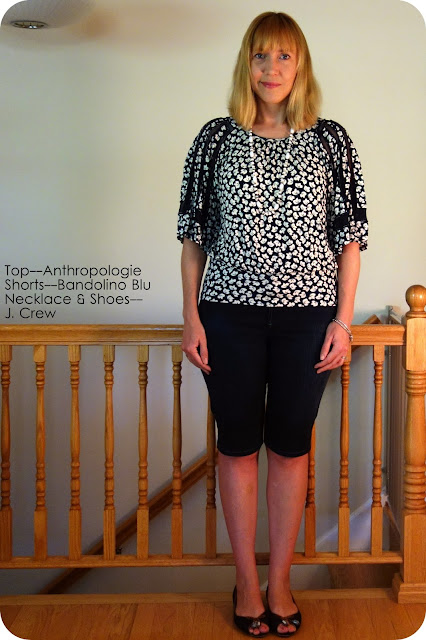 Ease of Wear: (3.5 of 5 stars--5 being the most easy to wear.)  Very easy.  I love these shorts so much.  I have had them for years and years, and as long as I keep washing them carefully, I should be able to wear them for many years to come.  The top is also very comfortable, a gorgeously flowy top from Anthro that I got for a screaming good price last summer (on sale, natch).

Cool Factor: (3.5 of 5 stars--5 being the coolest.) The top is definitely out of my comfort zone since I normally try to wear tops that highlight my smaller upper body, but I wanted to wear this top and was struggling with how to style it.  Finally, after trying on a few other bottoms, I found the sartorial sweet spot paired with these shorts.

Anecdote from the Day:  It took me a day or two to recover from the plane trip home with Angus, since he was a wriggly little monster for most of the flight.  By Thursday I felt good enough to get out the house with him where he could wriggle all he wanted at his "jump around the room" class. 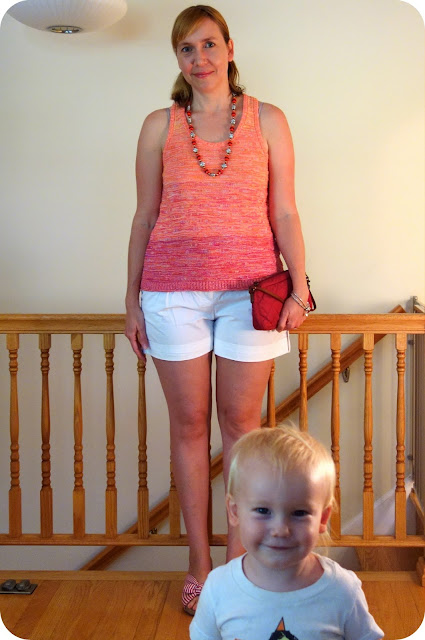 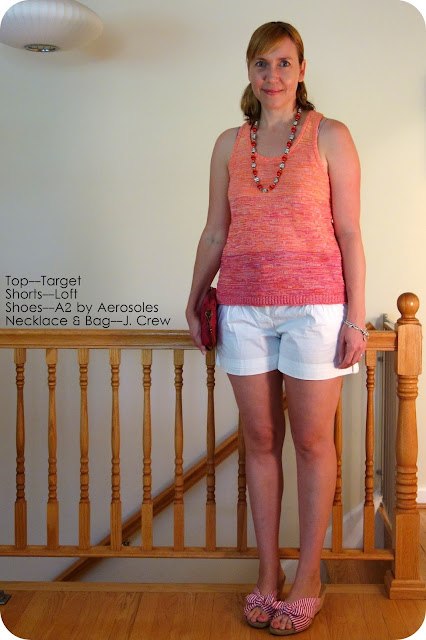 Ease of Wear: (3 of 5 stars--5 being the most easy to wear.)  These shorts are a weird fit--a bit big in the hips, a bit too tight in the waist, and a little too snug on the thighs.  By the second game of bowling, though, they had stretched out a bit and fit better, so they weren't awful to wear or anything.

Cool Factor: (3 of 5 stars--5 being the coolest.)  I love sherbert colors with white, it always looks so fresh and pretty.  This isn't a super cool look, but considering the way the ladies at the bowling reacted to the outfit, you would think I was wearing an outfit like this to play instead of a pretty basic SAHM summer outfit. Ha.

Anecdote from the Day:  I wasn't the only person wearing shorts to the bowling league.  However, the ladies who weren't wearing shorts, though, were all kitted out in long pants, long-sleeved tees, and cardigans.  I mean, yes, the lanes are air conditioned, but it was also 90 degrees outside that day, so hmm.  ;-)

I am now in a different league than last year, so no Dottie (my awesome 93 year old friend and competition), but I would like to report that I started off this year with some pretty decent games, and with an average score for all three games that leaves my last year's average in the D.U.S.T.  Yay! 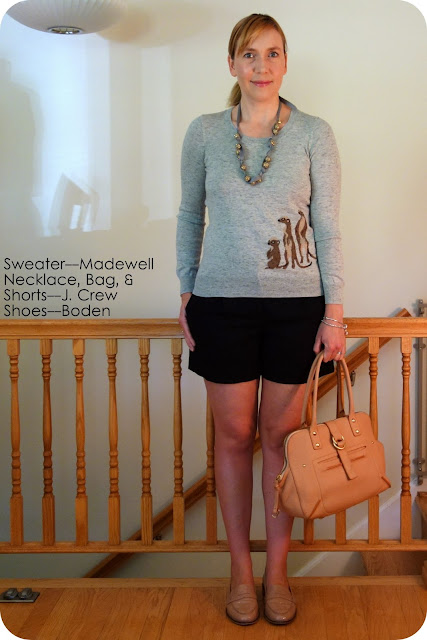 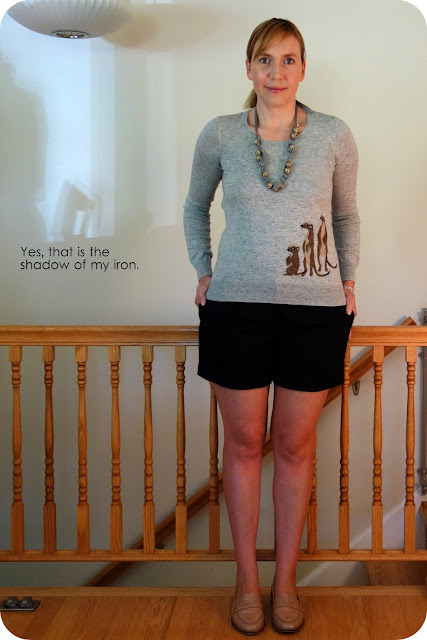 Ease of Wear: (3.5 of 5 stars--5 being the most easy to wear.)  These lined wool shorts from J. Crew are comfortable enough, but I still felt like they were too short for sitting properly.  I don't like too much of my legs showing while I sit, so I felt a tiny bit on display.  It's my hangup, and likely no one even cared about my legs being on display, but I still felt weird.

Anecdote from the Day:  That Rapunzel costume I mentioned above?  Yeah, it is torturing me because I want to make sure I match the pieces of the costume together nicely.  Originally I had a plan to use white velvet for the skirt and bodice front, with a poly taffeta in purple for the bodice and sleeves, and three layers of tulle (two of purple and one of sparkly white) as the overskirt, but then I cut the tulle and realized three layers of tulle stick together something awful and knowing how testy and persnickity I get when sewing, I knew I didn't have the patience to work with three layers of tulle.

So I had to go and buy some fabric at G Street that would work better, and OMG, the 2.97 remnant tables were stocked with all sorts of goodies, including a few yards of purple sparkly tulle, the exact right shade of color and sparkle that I had achieved with three layers of tulle together.  Only issue?  The color was just enough off from the purple poly taffeta that I had been planning to use for the bodice so I had to go and find another fabric to use for the bodice.  (I ended up buying a lavender wool gabardine instead.)

I also grabbed a few yards of some yummy poly jersey (like you see in J. Crew/Garnet Hill/Boden jersey dresses and tops), some swimwear fabric in turquoise, and some amazingly soft silver poly charmeuse.  I normally can't stand polyester, but most of the pieces of fabric I felt on that table felt a whole lot like silk or cotton sateen.  Apparently G Street receives shipments of fabric that are leftovers from New York fabric houses, and they regularly receive designer remnants which may explain why the poly I bought was so much different than the poly fabric I see at places like Target and Wal-Mart.  That doesn't mean that I have fallen in love with polyester, it just means I see the light that not all poly is created equal.  And at 2.97 a yard, I can't complain, either, especially if it means I can finish a darn costume by next Saturday.

Okay, all, have a great rest of your Sunday.

will be introducing its winter line this week.  It is timed poorly for me, though, since I don't get paid until later this week, so I suspect I will have to cancel most of my order, but I definitely am excited to see all the pretty items on my blog friends in their reviews!
Posted by dinagideon at 12:30 PM