Boden: Another Round of Weekly Sale Items!

Good morning!  I can't believe I haven't updated in so long.  It feels like forever since I have published an ootd post.  Ugh.

I arrived safely home yesterday after a VERY long, completely full flight from CA at around 1 am (it was an interesting flight in which Angus was the only child under 10--in some ways this was helpful, but not enough for me to say the flight was easy).  BTW, if you are from the great state of Oregon, this senator was on our flight and took a few moments while waiting in line for the restroom to be very sweet to Angus and me (I always try to get the seat right at the very back of the plane for this reason).  I had no idea who he was, but I thought he looked familiar, and the next morning my husband confirmed that I had seen Senator Wyden from Oregon.  (I guess working on the Hill for a few years sticks with you, I find familiar faces everywhere, and they usually are Representatives or Senators.  This is the DC version of "guess who I saw?"  Nowhere near as glamorous as the LA version.)

Anyhow, onto the Weekly sale over at Boden.  This is the second time this season that Boden has put a bunch of items in the sale, and based on previous seasons, you can expect a crop of new sale items every week.

The items are the colors/designs that are not necessarily selling super well, since Boden doesn't super reduce their hottest items, but that doesn't mean that an item that is in the sale once will stay there.  Last season a few items would sell very well after appearing in the sale, and not reappear in the sale again, so bear that in mind.

The sale updates every Monday, and by next week, I should have my act together to actually remind people on time.  I won't update the blog every week, but I am pretty good about reminding people of sale starts and ends at the facebook page, so go ahead and "like" that page if you want more reminders.

The sale is for 15% off, and you can use the sidebar coupon to further reduce that amount by an additional 15%, which equals about 28% off the items.  You do have to spend $100 to receive the additional 15% off, but two items from the women's section will put you over that amount, so that may not be a difficult number to achieve.  I do wish it were 15% off no matter what, but this kind of coupon may indicate that Boden is doing well this season and don't have to have a more enticing coupon to get people to purchase.

My favorites from this crop include the Daisy Jacquard Dress

(orange and green in the sale, I did a review here), the Laura Dress

(it has a button back, cute!), and the Tassel Heels 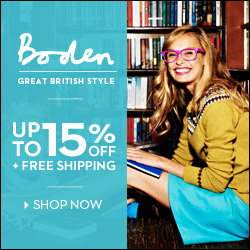 Posted by dinagideon at 7:51 AM