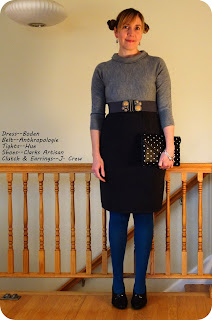 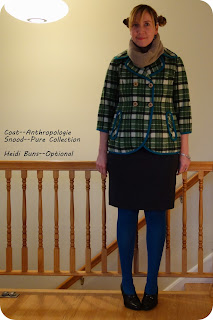 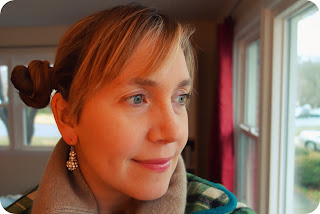 Where: Massage and Winesday.

Ease of Wear: (3 of 5 stars--5 being the most easy to wear.) Well, I think it was easy to wear, but since massages require disrobing, I definitely am taking off points since it took me for-freaking-ever to take all the layers off and put them back on.  I had no other choice, though, because I was walking from the massage to the Whole Foods, and it was pretty chilly out, and raining, so extra-thick layers of wool were the only real option.

is so warm.  I am glad I chose to wear it that day, since it allowed me to be warm and still have a fairly dressy look.  It is currently in Boden's

clearance section, and many sizes are still left.  (I am wearing an 8 long.)

Cool Factor: (2 of 5 stars--5 being the coolest.) Haha, in Anthro world, this is the coolest outfit ever.  In non-twee/unicorns/sparkle dust land, it is a bit much.

The piped plaid coat definitely is not a best seller.  I saw it at the store on deep discount and fell in love.  I have worn it a handful of times since then, and think the size small I got fits well and is a great fun option for outerwear.  It does have short sleeves, so you have to wear a longer length top/layer under it, or you can wear longer gloves (which is what I did, a pair of J. Crew long gloves from last year).

Considering how crazy my hair was that day, I expected all sorts of horrified reactions, but my brother and the massage therapist both liked the Heidi buns.  :)  For whatever that is worth...

Anecdote from the day:  Mr. Dina was NOT a fan of the Heidi buns.  He likes it when I wear pigtails, though, so I have given up caring, since "Ellie May Clampett" is okay but not a play on "Princess Leia."  Whatever.

He paid for my massage because he is a sweety, so I will forgive him.  LOL.

And I promise to only wear the Heidi buns whenever he won't have to see me.  ;) 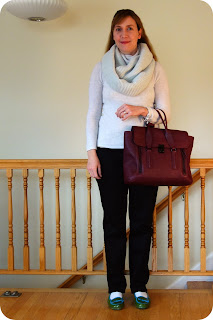 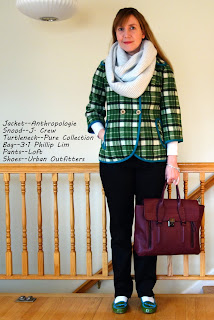 Ease of Wear: (3.5 of 5 stars--5 being the most easy to wear.) Since it was a pre-bowling day, I needed to be in something that I could easily move in so that I could ensure good scores*.

The turtleneck is from Pure (I did a review of the dark grey one here) and is currently in the clearance section.  It pops back from time to time, but grab it if you see it and want it, since it always sells out super fast.  They have introduced their spring line, though, and you could get this Gassato Cashmere Relaxed Sweater

with the 25% off sidebar coupon instead, and since it is fully stocked you don't have to do the whole "OMG, will that popback really ship to me?"

*It didn't work, btw.  My first game was HORRIBLE.  I have since vowed that I will never pre-bowl by myself ever again.  (And it had nothing to do with the outfit, btw.)

Cool Factor: (3 of 5 stars--5 being the coolest.) I like the look.  Nothing especially cool or uncool.  It just works and looks decent on this SAHM.

Anecdote from the day:  CW's school system had the day off.  She doesn't go to school on Mondays, but since all the other counties look to CW's school system for info on whether or not they should cancel school when there is inclement weather, them not having school really messed up all the other systems.  LOL.  The county that Rex's school is in usually DOES NOT cancel school for bad weather, since the county is fairly small and is in the "warmer" part of the DC area.  Well, that morning there was some ice and so Rex's school was canceled.  NO other counties canceled school.  In fact, almost all of them went in two hours late.  That was the first time I have ever seen that happen.

Fortunately I was home, and so it was no big deal, but for the working (outside the home) parents, what a pain, right?

I took Rex to pre-bowling with me.  He didn't notice how badly I did the first game, but I will make a point of telling you all that he did better than me that first game (he had bumpers, but still!).

My second and third game were decent, but I had the two of the bowling staff giving me personal lessons.  You know it's bad when that happens.

BTW, Boden fans, new "Spring Trim" today, with items in all categories at 20% off (and an additional 15% off with the blog's sidebar coupon

).  Two new trim items from the women's cut include the Stitch Detail Dress

and the Colourblock Bag