OOTDs: Lots of Pants. Lots of Tops. Part One.

In my neverending backlog of outfits, I have a ton of really casual looks that include pants and tops.  (Exciting stuff here, lol.)

Anyhow, over the next two days I will publish them so I can be caught up at least partially.  ;)

Onto the outfit of the day purge! 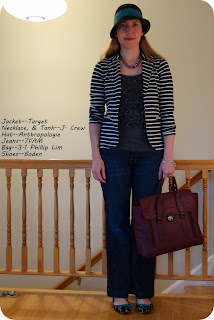 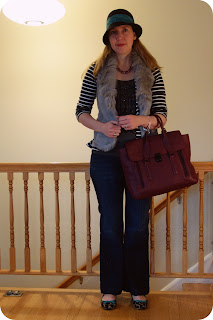 Ease of Wear: (3.5 of 5 stars--5 being the most easy to wear.)  I love the overall comfort, but the 7FAM jeans are a bit loose and a bit low, so they kept needing to be hitched up, which isn't all that comfortable when you are running around after a baby in a baby gym class.

Cool Factor: (4 of 5 stars--5 being the coolest.)  I think it looks pretty cool, if a bit derivative.  I didn't end up wearing the shearling vest, since I thought it read a bit too late 1970s.  I also sort of felt like the shearling vest was a little much for a preschool run.  That said, I would like to try the complete ensemble to go to a museum or out for drinks.

Lots of folks complimented the outfit (top photo), I think the bling on the tank drew them in...

Anecdote from the day: Nothing really to report.  Seriously, just another average day for our average family.  :) 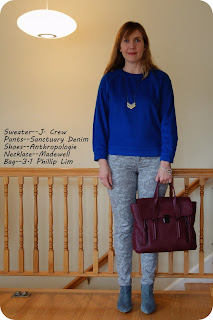 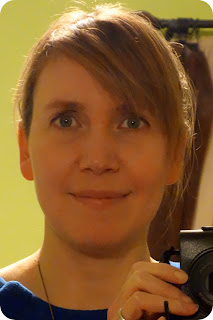 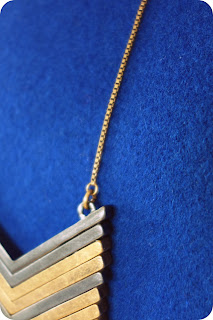 Where: Out to the fabric store to pick up patterns and fabric. Plus Chipotle, yum.

Ease of Wear: (3.5 of 5 stars--5 being the most easy to wear.) I was having kind of a fat day that day, which means though the jeans look decent enough on me, I felt like I was just barely fitting into them.  It's on days like these (during the winter, especially) that I wish that elastic waist jeans were an acceptable form of fashion.  ;)

The brushed cashmere popover* was awesome, though.  It was cold and kind of windy, but I didn't need an additional piece of outerwear, this was just enough coverage since the woven cashmere textile is thick enough (and double faced, so it is super soft against the skin) to protect from the elements.  Keep in mind I am talking about VA cold and windy...folks in Canada, you all definitely should not be wearing this by itself for your cold and windy.

*I had been watching this item all fall for a break in the price.  Even at its original sale price, it was very expensive.  When J. Crew offered an additional 40% off, I decided it was worth the semi-splurge since it could be both outerwear and a sweater in my wardrobe.  I bought the extra-small which is fine for my frame, but I do have to undo the bottom two buttons near my hip.  I would have tried a small if it had been available, but I am perfectly happy with the extra-small.

Cool Factor: (4.5 of 5 stars--5 being the coolest.) I think the outfit looks pretty cool.  I love the grey with the cobalt blue and aubergine.  The floral lace jeans are likely on their way "out," but I think the look overall is modern and fun.

I ended up putting my hair up later that night, and when I looked in the mirror, it appeared I had a haircut.  My hubby would never be okay with me cutting my hair that short, but I think with the deep swooping side bang, the shorter hair would actually look okay on my frame and face shape.  Which sort of surprises me.  :)  I would love to try it some day, and not just in this "faux" way, but I think it will take a few years of wearing Mr. Dina down.

Anecdote from the day: I ended up walking away not with patterns I needed but patterns to make the kids pjs.  I also picked up a pj pattern for me.*

Chipotle was awesome.  I noticed it was taking Mr. Dina a ton of time to get the food, but figured it was some sort of "let's be patient" kind of situation, but in reality, the folks were screwing up our orders.  But none of that matters because once we got our food, we ate and enjoyed.  Halfway through eating the manager came by and profusely apologized for the problem and gave us THREE free kids meals for the future (one for Angus, even!).  Considering that it wasn't that big of a deal to us, we were blown away by how well they handled the small problem.  :)  Chipotle for life! 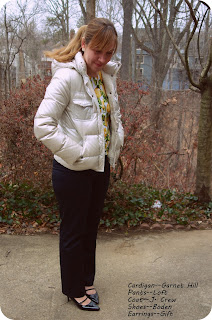 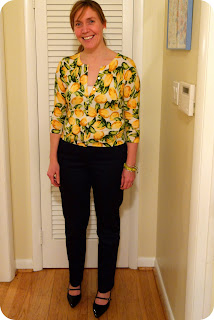 Where: Mass and a Luau Party at Rex's school.

Ease of Wear: (4.5 of 5 stars--5 being the most easy to wear.) Even the gorgeous Sixties Heels

However, it was insanely cold that night, with icy/snowy precipitation, so this is why I wore something this easy and casual to church and a school party.  Rex's school is next to the church, so the walk over was fairly okay, but by the time we left, there was even more slushy bits on the road.  Fortunately the leather on the shoes were okay, glad I decided against suede.  :)

Cool Factor: (2.5 of 5 stars--5 being the coolest.) Well, it is a pretty outfit, and the lemons sort of read Hawaiian to me, lol, but since it was an outfit decided by the weather and not by the events, there really isn't much to say about it other than it did its job.

Anecdote from the day: Rex has a girlfriend at his school.  Her mother informed me that she has been in "like" with him since the first day of school.  It is now February and she has taken to hugging him, laughing at all of his jokes, walking next to him, and sending home love notes (which I have kept, OMG, they are so cute!).  At the school luau, she chased him around the room, again and again.  Her mom and I just lol-ed.  Very sweet.  Rex, btw, has made her a bookmark and has said he may marry her.

Also from that night...I think our priest is great, he and I went to the same high school (he is far younger than me, though, sigh, old age creeping in)...but I ask you, how comfortable would you be speaking with him while PSY's "Gangman Style" is playing in the background, with the words "H-E-Y Sexy Lady" seemingly louder than all the other words of the song?*

*On a related note, right after CW was born we went to the school's Oktoberfest celebration and the priest there at the time was talking to me about something when Billy Joel's "Only the Good Die Young" song was playing in the background.  How, and by whom, was it decided that was a good song to play at a Catholic School event?  I mean really!  :) 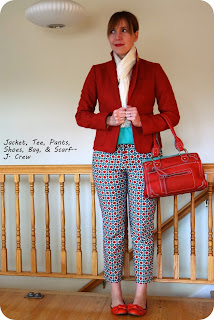 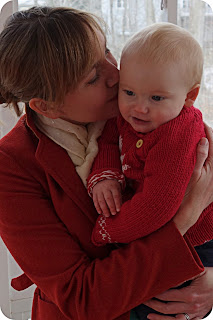 Where: Out with my brother to have fun with the kids.  Also wearing a ton of red for "Wear Red" day.

Ease of Wear: (3.5 of 5 stars--5 being the most easy to wear.) I can finally wear the cafe capri in kaleidoscope dot!  I bought them when pregnant with Angus, but I was unable to wear them until just recently.  Unlike what everyone else said, the pants did not run big for me, in fact, I should have sized up.  (But now that I am getting down in weight a bit, I guess it's okay I bought my "size.")

Cool Factor: (4 of 5 stars--5 being the coolest.) I am giving it a 4 because I wore my red with pride.  I take women's heart health seriously and think no matter who you are, you should wear red on February 1.  I even made Angus wear red.

I think had I worn this outfit on any other day, I would downgrade it to a 3 because it is a bit matchy-match/preppy to be cool.

Anecdote from the day:  A lady at the coffee shop said, "I LOVE your pants!"  I happily said, "thank you, and they finally fit!"  She replied back, "that's awesome."  I love girls who love clothes.  :)

Okay, that's it for today.  I am fixing to comment back on my backlog of comments at the last week's posts.  I like Saturdays that are lazy, since that means I can be a bit less lazy.  (Weird, right?)

P.S. Before I go, I wanted to let you all know that Boden "pinned" a photo of mine (the still shot of the Pointed Mary Janes

I reviewed in this post) to their Pinterest "How We Wear" page.  I am super excited and very grateful!  Thanks to Keeley for letting me know!!!  :)
Posted by dinagideon at 11:46 AM