J. Crew Reviews: An Oona, a Tiered Ruffle or Two, and a Couplet!

So I asked myself, "what kind of post could I possibly do on Superbowl Sunday that would actually get people reading?"

Well it is clear that almost all people are watching the Green Bay Packers and the Pittsburgh Steelers battle it out, and that's cool, but this post is for you, the non-Super Bowl viewer who like me is growing weary of watching Toddlers and Tiaras for the fifth time today (don't judge, CW loves the rhinestones and the talent portion--lol).

J. Crew Wool Oona Herringbone Shift Dress, Size 8.  I had tried this on in the store in a size 6 and that dress was far too tight at the hips.  I *knew* that if I bought it, I would have to get an 8.  I also knew that the bust would be too large, but the design of this dress is meant to be loose overall, so the extra fabric in the cowl, shoulders, and bust aren't really that big of a deal.

And know what else isn't a big deal?  My lack of makeup.  ;)  Didn't feel like bringing the makeup and hair to my "photo shoot" this morning.  (If you want that, you Arbonne lovers, go a few photos down, I have a pic of me all glammed out--almost toddlers and tiaras territory!)

I LOVE the cowl on this dress, so chic.  The cap sleeves work nicely with my teeny shoulders and super-spaghetti arms.  I *almost* look balanced, top and bottom, hallelujah!

From the side you can see the zipper detail.  They hide pockets!  The length is decent enough, but may not be work appropriate without tights or hose.  :)

I belted it with a thin, sparkly belt and loved the look.  :)  I actually may always belt it, although it loses a bit of its cool "Mid-Century Mod" vibe.

FWIW, my dad doesn't like this dress as much as the next two because this one is more "frumpy."  LOL.  I said, "you mean it doesn't show off my legs...you mean because this could be worn to an office?"  He smiled and said, "yeah."  I think he wishes he worked in an office with Vegas showgirls.  Ha.  (He was over tonight to watch the Superbowl with Mr. Dina, btw, and I gave him a sneak peek to today's post.  He also "HATED"--his words, not mine--the Michelle Obama outfit.  I always love hearing my dad's opinion, we often don't agree, and we both live with the outcome of my fashion decisions, and have been since I was 7.)

P.S. Gigiofca didn't get the "feel" from the Oona, either.

J. Crew Tiered Silk Ruffle Dress, Size Small.  I saw this on-line for a price that was UN-FREAKING-BELIEVABLE.  I ended up grabbing it during one of the 30% off promos and it was something like $35.  It was originally $148.  I think it probably came to folks, they tried it on, saw it was way too big and that the back of the dress was just black merino wool (the ruffles are only on the front), was really short, and just said "he%% no."  I probably would have at $148.  But I knew to size down by the time I bought it, I knew about the black merino wool back, and I knew how short it was, so I was fine with what I got.

I somehow lost the grosgrain ribbon that went with the dress, but I found a great solution (much like my red ribbon/rosette belt that I used with my Loft Lace Dress).

I paired the dress with a silk obi sash I had from a Banana Republic dress that got ruined by moths (thank goodness the belt was fine).  The cardigan is the sequin scarf cardi from last winter.  The tights are some pair of opaque black tights that I have had for years that have not snagged or run or anything (really exciting, right?)!  The shoes are the Prized Rose Peep Toes by Miss Albright (Anthropologie).

So why did I need to get all glammed up in this dress? 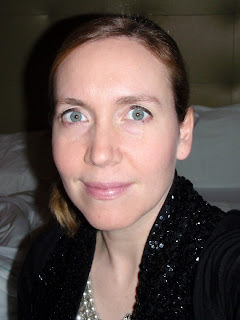 And why did I have to wear super-sparkly makeup? 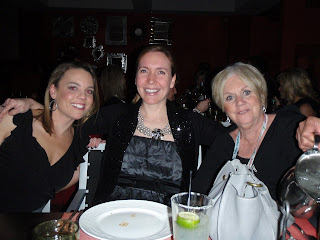 Because some beautiful Arbonne Consultants and I were in Vegas for a good time, and had a grand party to attend!  :)  Here I am with two of my favorite Arbonne consultants, we had gone to eat at one of the yummy restaurants in the MGM Grand (last year, for instance, I went to Craft Steak--yum!).

After dinner we were able to see Kevin Costner's band, Modern West, play his version of country rock (at least that is what I assume it was, sure sounded a lot like the Eagles a la 1973).

P.S. Here are some other reviews of this tiered silk ruffle dress, DaniBP, and Jessie.

J. Crew Collection Couplet Shimmer Dress (also known as Aurelia on Net-A-Porter), Size 8.  This was yet another dress I had to size for my hips.  The tank is REALLY loose.  I will most likely have to take the sides in to make it a bit more fitted.  I don't mind this look, I just know I would feel a bit "exposed" wearing it this loose.  FWIW, my dad liked this dress the best.  :)

Here the dress is belted, and I prefer the dress this way.  That said, the belting does make it shorter, so bear that in mind.  I would probably only wear this in public if I was wearing tights and I had taken in the tank.  (Which I can do with my sewing machine!!!)

Not a huge gain in length, but maybe a 1/2 inch?  I say go unbelted if you need the length, otherwise, stick with belted, as it gives the weird elastic waistband a bit of an anchor. 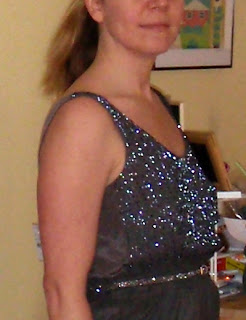 The top is very pretty, and worth taking in, and not returning.  The bugle/seed beads are well-secured and the shade of beading is just perfection with the soft silk tank.  The skirt is made from a soft wool, like a 120s wool, but I am probably wrong about that.

P.S. Found one review, but of the plain top, non-shimmer version, on AudreyBella.

You all have a great night.  I hope I saved some of you from the Superbowl, if that was your desire.  If not, it is good to see you this Monday morning.  ;)
Posted by dinagideon at 9:17 PM