Hey, all...obviously I have been busy here in the "real" world, both CW and Rex started school again (Rex--Monday; CW--today, kindergarten!), so I have been a bit unavailable.  Tomorrow Angus and I are headed to CA for my cousin's wedding, so (big ole knock on wood) I may have a few moments to get some junk done in my "virtual" world, too.  Ahhh, vacation (even if one of my rugrats is with me, lol)... 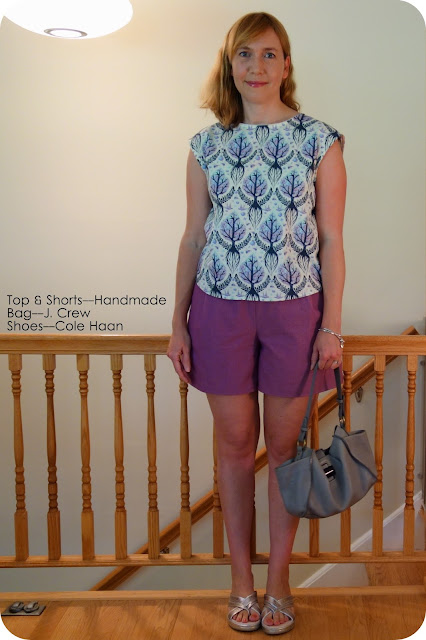 Last week I finished an outfit that I made with the intent of wearing together, the top made from a beautiful quilting cotton called " Tree of Life

and the shorts from a multi-tonal chambray from Robert Kaufmann (a little pink is mixed in the weave of the purple) ( similar color here, my shade is nearly sold out

I had known the chambray would become shorts, but when I received the quilting cotton in the bundle (you never know what you will receive, but most of the time there are three yards I can use for something for me, and around four yards for projects for the kids), I was stumped.  I knew one yard wouldn't cut it for a skirt, but I wasn't sure if any top pattern I owned would work either since most women's top patterns are cut long and with a ton of ease.  Then I realized my McCall's 6519 pattern had a top pattern in it that could be made for my smaller pattern size (10) as long as I shortened it for my shorter torso.  As long as I did both of those things, I could just squeeze this yard onto those pattern sheets.  (It took me nearly as long to lay out the pattern on the cotton as it did to sew the darn thing up, ha.) 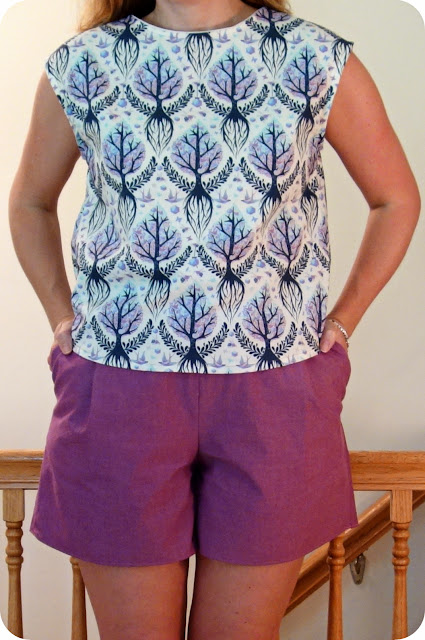 As you can see, shortening the top had no ill effect, in fact, it allows me to wear the smaller size since had I kept the length to its original length (an extra two inches), the hem would have been right on my mid-hip, which is where I am widest.  Having the hem fall so much shorter means the 39.5 inch hip measurement is more than adequate ease for my frame at that part of my hip.  I also get to show off the darling shape of the shorts.

The shorts should look familiar if you are following my sewing journey, these are the same ones as I showed off here at this post (from the February 2013 Burda Magazine).  I changed up a couple of things, I made the pleats in the front smaller and facing out to the pockets (that was a mistake, oops), and I shortened the waistband so the shorts would fit a touch better. 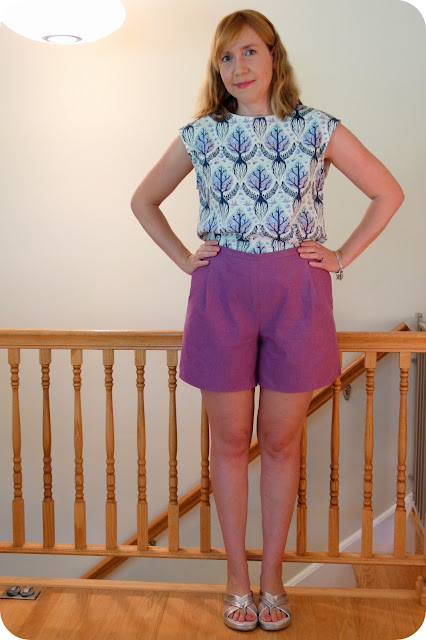 My dad loved this outfit because he said it reminded him of 1950s "mom" wear.  :-)  There is definitely a retro feel to the look, especially if I tuck the top in, which I only did for the photos to show of the shorts shape.  In reality the top's cotton was a bit too thick to wear tucked in and didn't lie as well as when I had it untucked.  I do plan to tuck tops into the shorts, but the material of the top needs to be a bit thinner. 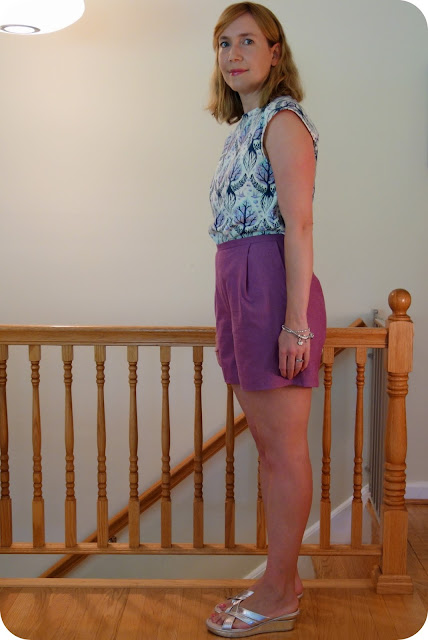 Side view.  I think I won't stop making either pattern because both work well for my body.  The top doesn't constrict me in the armholes, since the holes were made deep enough on the pattern that I don't need to adjust anything for my square shoulder shape, but the top still fits closely to my body, not overwhelming my rather "underwhelming" bustline.

The shorts feature the "Burda Crotch Curve," which apparently is a big deal in the sewing world, since many of the American designed patterns are far too shallow and/or not angled properly for the true shape of many women's lower half.  And so you all know, it isn't even big-bottomed women who need the "Burda Crotch Curve," since I have read that some flat-bottomed and small-bottomed ladies like it, too.  Hmmm.  I have made pants and shorts from other companies, and I have noticed that the area down there is a bit more *enclosed*, so maybe we do need to give the Germans some credit. 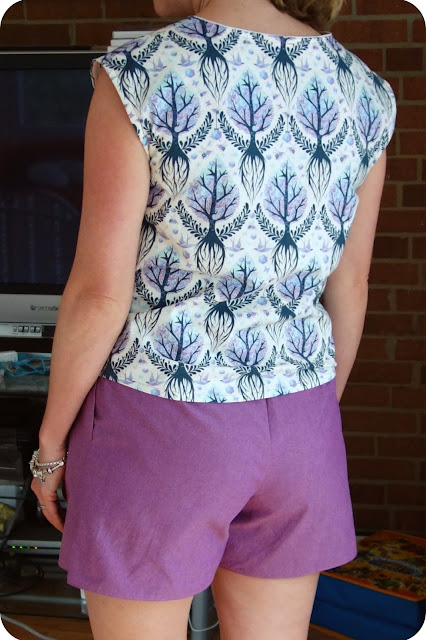 Rear shot.  I had to take a bit of the back seam in to make the waistband fit properly (the waistband is a size smaller than the hips).  I should have just made a dart and sewn it flat, but since I am still fairly new, it didn't even occur to me to try that.  Oh, well, next time. 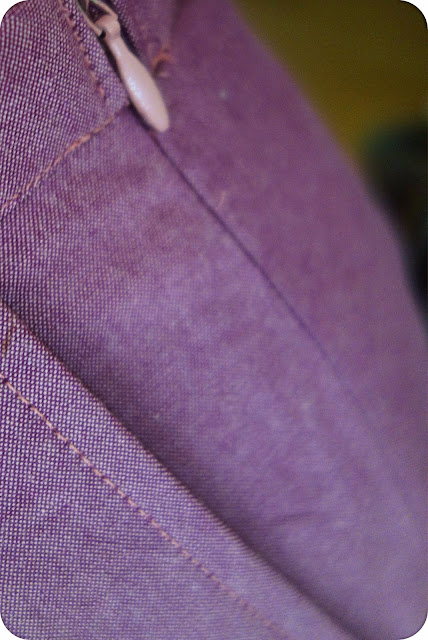 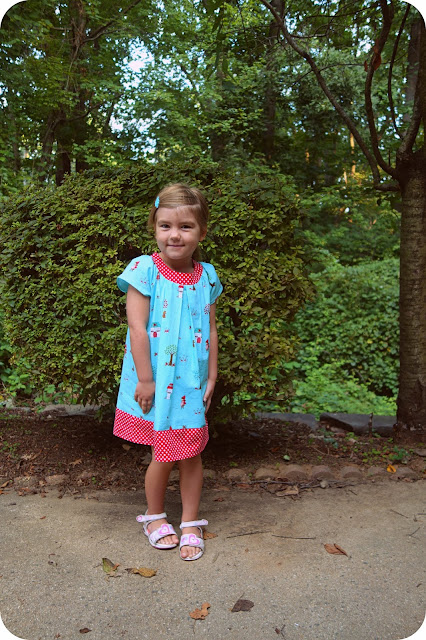 I spent the good majority of my weekend making this dress for CW.  I had cut the ADORABLE Riley Black Little Red Riding Hood fabric ( main fabric here

here) a bit before sewing it up last weekend, I like to cut all at once and then sew all at once, I cut a darling romper for Angus at the same time that I am also entering in the contest (still have to publish those photos).

I knew that I wanted to give her this Kwik Sew dress before she went to school so she could wear it to her teacher's meeting with her, but I also knew I wanted to enter it in the sewingpatternreview.com "Sewing for Children" contest, now that I am a member of that website.  I don't have a chance in h-e-double hockey sticks of winning, but maybe I will grab a few votes?  ;-)  I think it looks pretty darn cute, anyhow. 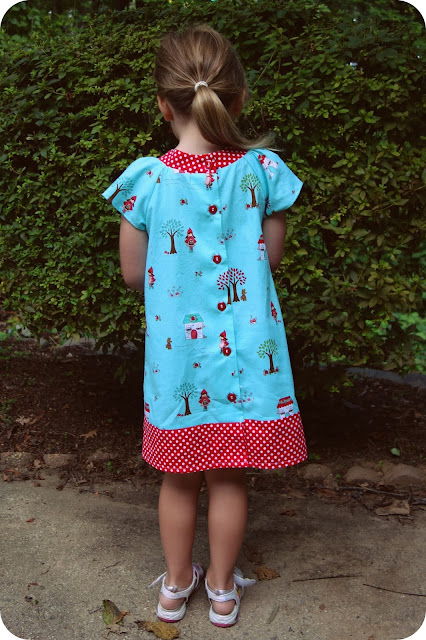 The back features floral buttons that I machine sewed on...killing two needles in the process.  Whoopsie.  I forgot that if you want to machine sew a button on, you need to slowly turn the handwheel and make sure the needle goes in the hole, then measure the zigzag length by doing the same process with the hole right next to it.  By the fourth button, I got it, but not before my darn machine was getting mad at me (I should treat her better!).  I used this tutorial to teach me how to sew the button (I used my open toe embroidery foot to hold the button down), but forgot to re-check the simple details first.  Don't follow my example! 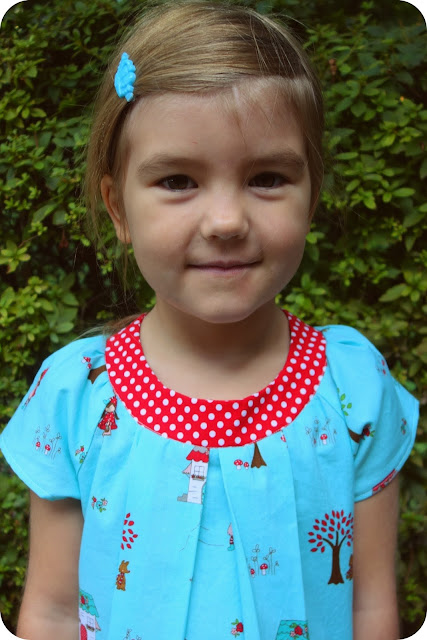 Here is another set of pleats that look okay but weren't the way they were supposed to be.  LOL.  Oh, well, guess that makes this dress "extra-special."

I heard from someone that the Amish like to have mistakes in their quilts to show they are handmade.  We'll go with that on this dress, too. 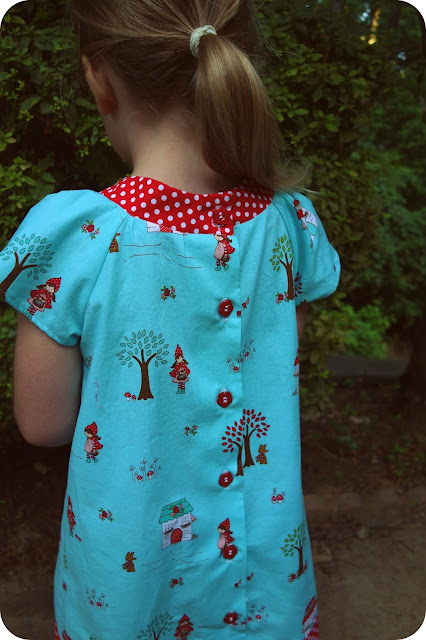 I ADORE this shot.  I think I might print it out and frame it.

The dress was very easy to sew up, but because of the buttons and buttonholes (both my first real attempt at them), the dress took about two hours longer than it should have to sew up.  The Kwik Sew pattern and instructions are very beginner-friendly, and this particular pattern is great if you have a little girl.  (Especially one who owns an American Girl doll, since there is a pattern for a matching dress for her, too.  Yes, I will make CW's American Girl doll a matching dress.  No buttons, though!)

Okay, you all have a great day.  No news of a Boden sale for Labor Day, but I will be keeping my eyes open for you all.