Confession Time: I have had this dress since the ORIGINAL release well over a year ago.  I just knew I would find a reason and a time to wear it (a la my Anna Sui for Target "dress" {snort--dress, laugh}).  Well the time happened when I went to NC for my Arbonne meeting. The night before the meeting, we all went out to a Mexican place for dinner and it finally appeared that the right moment had arrived.  LOL.  I am sure any number of occasions would have been the "right moment," but whatevs.  I'll take it.

So I read that the Go International line would be re-releasing some of the more popular pieces from the line since its commencement five years ago, including the Rodarte for Target Lace Print Dress.

I don't know if the original dress that I own differs in anyway from the re-release, but in my opinion, they look exactly the same.  If you own the re-release and see a difference between mine and yours, please let me know!

From the front. I bought a small. Word of warning, this is a junior's size, and I only went with a small because I am really small of bust. The hips are pretty generous, so I knew I would be safe. If this had been a sheath dress, though, I would have definitely bought a medium.

This fabric is poly-tastic, but at least it is soft and silky feeling. The waistband is elastic, which is why I added on the elastic blossoms belt by J. Crew. I rounded out the outfit with black opaque tights and my favorite pair of black heels by Boden. ;)

You should also be aware that the arm and neck are lined with a poly "chiffon"  that has the potential to fray.  I believe it can be removed, if it ever becomes obnoxious.

I think the dress is pretty well made, and the price is decent.  I may have gotten mine on sale with the original line, but it's been a long time, so I don't remember.

From the back.  I love the print, A LOT. 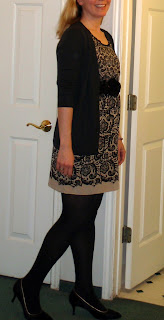 From the side, with a J. Crew cardigan from a few years back. 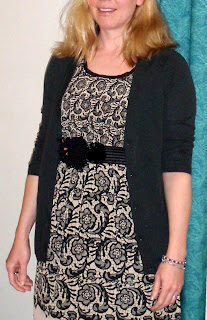 Close-up of the print.  If this dress were ever made where there was a nude layer underneath and an actual "LACE" overlay, I would so buy it...can you imagine how beautiful that would look???

Alrighty, hope that helped some of you out.  I think I am sitting this re-release out.  I might take a look when the items go on sale, but as of now, my favorite piece from the line is the one I already own.  Funny how that works. ;)
Posted by dinagideon at 9:49 PM