Yes, I am {finally} publishing my outfit that I wore to the Rush concert last Friday.  It seemed fitting that exactly one week after I was at the concert, barely (and I mean BARELY) arriving on time, I would show off my sartorial choice.

I don't know if I was the best dressed there, but I suspect I may have been in the top 10.  There were female fans there, but let's just put it into photographic proof how few of us there were. 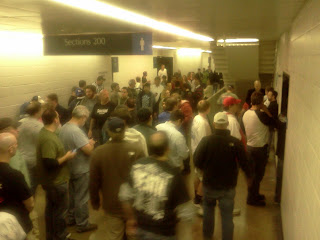 This was the line to the men's room at intermission.  Yes...it is that long, from the door to WELL beyond my camera's angle.  Women's room?  No line, I was in and out in mere minutes, and well, you all know this, girls require much more "finagling" to go to the restroom.

And count how many women you actually see in the background...maybe one or two?  Exactly.

Also, most of the guys looked exactly like Mr. Dina.  You know, ancient Rush concert tee (the older proves what a HUGE fan of Rush you are--Snakes and Arrows concert tee isn't gonna cut it for proof of your fan status), pretty dank jeans, and more white tennis shoes than you can shake a stick at.  LOL.

The women, overall, fared much better.  Definitely tees, but women don't give two shakes about "proving" anything, so any Rush tee is fine.  In fact, just showing up at the darn concert is enough to prove how cool you are to a bunch of male Rush fans (including the women that were only there to prove how much they love their significant others--not my case, clearly, we both are BIG Rush fans, probably why we stay together).

Concert Hall... by dinagideon featuring straight leg stretch jeans
So I specifically chose NOT to wear a female version of the male Rush look.  I wore what is in the above polyvore.  ;)

I call it "edgy" chic with a twist of sequins.  The boots made me feel a bit bad-a@@.

No jacket.  It was really warm in the "concert hall" that night and I had to go without the jacket.  Love how the scarf works exactly right with the sequined Target tank.

I wasn't sitting anywhere close enough to have the lighting play with my sequins, but had I been in the right place (in other words, places were there were fans who actually STOOD during the concert and rocked out instead of mutely staring at the band and looking depressed--huh, say what?!?--but that is a gripe for another post) these sequins would have for sure caught the eye of Geddy.  Right?  LOL.  :)

With the Madewell jacket which I bought this last winter.

BTW, this Friday was the only day amongst ten or so days that the weather didn't go above 70 degrees.  In fact, it was almost like early March...yucky, clingy rain and temps in the 40s.  I guess "edgy" chic doesn't go well with 80 degrees and sunshine, but still...ugh.

We left our house in Alexandria at 3:45 and after a quick trip to drop the kids off to my dad, we were on our way.   S-L-O-W.  OMG, SO S-L-O-W.  Baltimore is 50 miles from DC.  It took US THREE HOURS to get to Baltimore.  It was maddening.  We literally sat in our seats as the concert was starting.  (THANK GOD!)  I felt we were blessed by the rock angels but also a bit cursed by the rock devils.  Very strange. 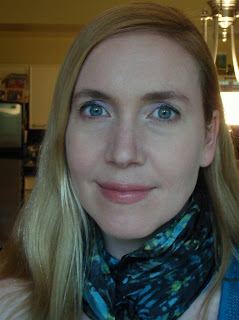 All Arbonne makeup, taken up about 12-15 notches.  I actually used liquid eye liner!  I felt like the look needed more hardcore makeup.

BTW, my current Arbonne offer expires this evening at 11:59 pm Eastern time.  To find out more on the offer, click on over to my website. 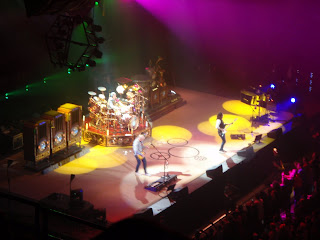 The band rocked so hard they completely and utterly kept me on my feet.

Me, by myself, I might add.  What was wrong with my section?

P.S. My Friday night plans this evening?  Umm, swim coaching.  Sigh.  I wish I was at another Rush concert.
Posted by dinagideon at 7:01 PM